Arrow introduces a new rival for Oliver’s self imposed title as the saviour of Star City as Quentin starts to deal with his issues.

I know I’ve said it before but I’m really loving the back to basics approach that this season has. Having Ragman around has shown us that the show is capable of blending the fantastical elements with the more grounded villains and situations. There’s definitely room for both but Arrow should try to keep the power level as low as possible so that it seems possible that the team could handle a given problem. 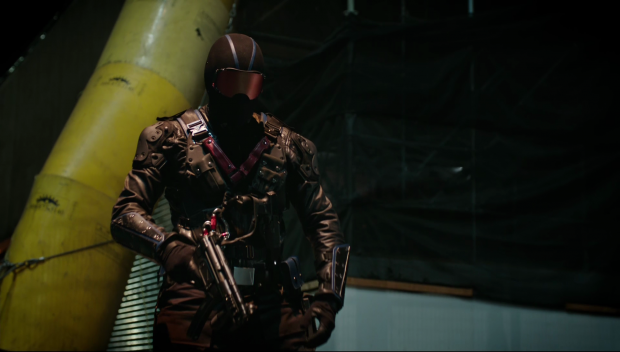 That’s why a character like Vigilante works so well. His commitment to his personal mission as well as his considerable skills are more than enough to give Team Arrow a run for their money since they could all be taken down by a bullet. He also acts as a mirror for Oliver who is forced to question his role as Green Arrow and whether he is actually doing any good.

Vigilante sees the fight against crime as a War where Oliver doesn’t and his methods are more brutal as a result because in his head the ends justify the means. Oliver has been going too easy on criminals as far as Vigilante is concerned and the only way to really solve the problem is to kill them and remove it altogether.

Oliver has been wrestling with whether to kill all season and has only just made peace with the fact that he will kill when he feels there is no other choice but the presence of Vigilante might force him to reconsider that since he gets asked the very pointed question of whether he is actually getting the job done. Is the Green Arrow really any use to Star City or is the problem just being moved around? It’s a loaded question and Oliver doesn’t really have an answer for it.

His conversation with Susan allowed him to work through this dilemma in a roundabout way since he couldn’t be honest with her about his activities as Green Arrow. He dresses it up as the Mayor job being completely overwhelming but quickly brings it around to someone doing the same job using more extreme methods. He says that he isn’t willing to go that far but it can’t help but play on his mind. It does seem a little odd that he would confide in a reporter who might use his self doubt as a headline over someone like Diggle but it is also consistent with Oliver’s predilection for isolating himself from those closest to him. In a way Susan is the only one he could talk to because she is so detached from that part of his life. 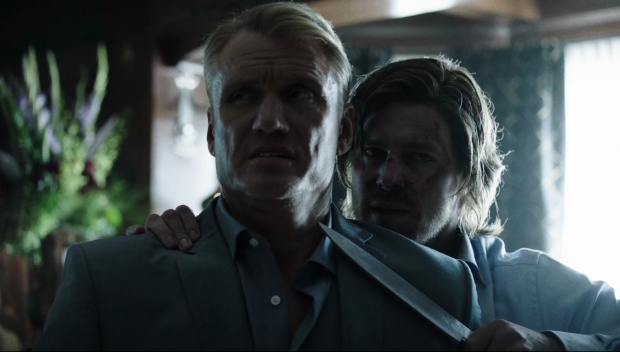 Oliver tries his luck against Kovar

The whole idea of Green Arrow not getting the job done by leaving criminals alive is exemplified through the bank robber, Eric Dunn who says that he went to prison even though he was innocent and his time there turned him into a criminal. It’s a quick conversation and there isn’t much more to it than that but it does feed into the overall tapestry of the system being broken in some way. The legal system turned someone who wasn’t a criminal into one so there’s something not working there. It’s not the same as Green Arrow leaving criminals alive but if people can become criminals after 2 years in jail then what does it do to those who are already criminals or murderers? It’s a fascinating question that this show could really explore if it wanted to.

Vigilante remains a mystery throughout the episode with his methods speaking for themselves. Oliver almost unmasks him but he has prepared for that eventuality which definitely shows him to be a formidable opponent for Team Arrow. Considering there was a version of the character in the comics named Adrian Chase then I’m almost certain that this will be the case here. The close-up when he agrees with Oliver that Vigilante doesn’t wait for warrants pretty much tells us this. Also his connections as the District Attorney will give him access to the information he needs to beat people to the punch. It’s an interesting throwback to “Legacy” where Oliver says that the purpose of his role as Mayor as far as he’s concerned is to use the information he has access to so that he can be more effective as the Green Arrow. Chase can hold up a mirror to Oliver in ways that other characters can’t.

Vigilante’s presence gives me another thought on the identity of Prometheus. I wonder if Vigilante and Prometheus could both be Adrian Chase. It has been established that Chase has a bit of a grudge against Oliver Queen -even if a stolen girlfriend is flimsy motivation for him to go on a crusade against him- so it makes sense from the point of view of having a reason to go against him. It might be quite effective if Vigilante becomes a part of Team Arrow eventually and Oliver develops some kind of friendship with Chase only to have a shock reveal destroy all that. It’s pretty much what happens on The Flash all the time but it could work well if done properly. I think it’s a long shot but I’ll add it to my list of theories should such a list ever materialise.

Quentin is still struggling with his alcoholism and decides to resign as Deputy Mayor as he feels that he can’t do his job properly any more. It’s really powerful stuff that Paul Blackthorne is able to sink his teeth into as a performer and perfectly show how completely lost Quentin is. 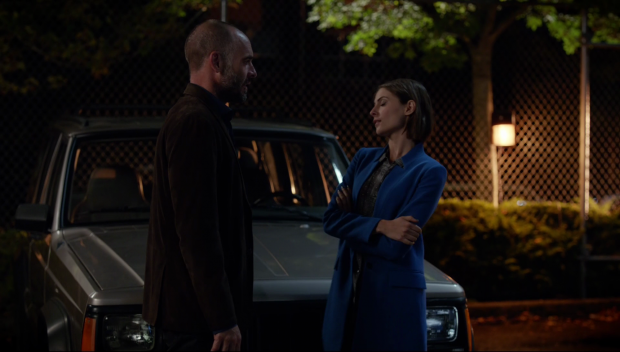 This creates a perfect opportunity to develop his connection with Thea who does everything she can to support him. Laurel’s death has completely broken him and he has let his life fall apart as a result. Thea recognises this because she understands loss and is able to help him better than most people would. She mentions that he’s like family which feels genuine given all that they’ve been through over the years. The obvious thing to say is that they have a father/daughter connection but I would say that Thea takes on the paternal role in this relationship which definitely stands out considering the age difference between them. It’s a unique relationship but it works and there’s a sense that Quentin is starting to get his life back on track but there will is a long road ahead for him.

The hint that Quentin might be Prometheus is directly addressed this week when he admits to Thea that he discovered blood and the throwing star. He doesn’t believe that he could be capable of something like that which completely rings true and concludes that Prometheus must be targeting him for some reason. Oliver’s theory is that Prometheus knows who the Green Arrow really is which we know to be true so the reason for him going after Quentin in this way is unclear at this point.

We don’t get much from Prometheus in this episode but we do learn that Evelyn seems to be working either with him or for him. Out of everyone in the new team having her as a traitor makes the most sense as she blames Oliver for the death of her family and generally disagrees with the way he used to do things. We don’t know much about this connection yet but surely she should disagree with Prometheus’ methods even more. Time will tell what this all means but having a traitor on the team will tie into the theme of trust that has been running all season.

The rest of the team are still fairly hit and miss because of a lack of development but I find myself scratching my head over why Curtis is even there because he seems so far beyond useless. He is a liability on every mission he goes on and I’m surprised that Oliver hasn’t picked up on this yet. It’s time that he started to supplement his skills with gadgets as that’s the only way I could see him being useful. I also find Rory really hard to understand when he’s in his Ragman gear, the distortion on his voice makes it almost impossible to make out what he’s saying. 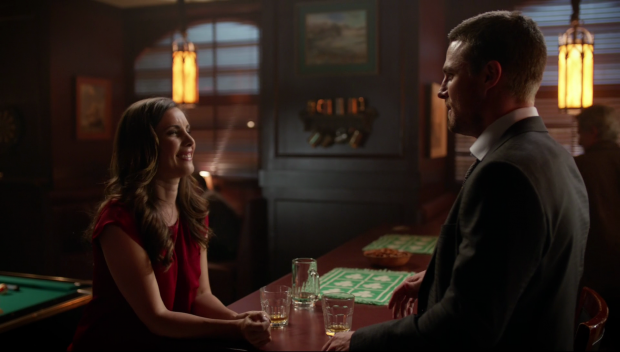 Konstantin Kovar is proving to be a really engaging villain in the flashbacks. Dolph Lundgren has so much presence and never fails to be intimidating. The development of their antagonistic relationship throughout the episode is done really well and Lundgren’s calm delivery of the threatening dialogue is chilling. His ferocity when he and Oliver come to blows is excellent too and I really look forward to seeing more of him. He is still my top choice for Prometheus which would nicely tie the flashbacks to the present day.

Diggle’s contribution to the episode was good in theory but didn’t quite work in its execution. His brutal interrogation technique to gain information feels like it comes out of nowhere considering how measured he was in his handling of his life as a fugitive last week. It is explained as being caused by missing his son’s -thanks Barry- second birthday but it doesn’t feel like a reaction Diggle would have. It’s rare for him to be driven to anger like this as he normally retreats into himself.

It does allow his bond with Rene to develop when he arranges for Lyla and John Jr. to come to the Bunker with a birthday cake. It’s a touching moment that reminds us of the great chemistry between David Ramsey and Audrey Marie Anderson. I really like the mentor/mentee dynamic between Rene and Diggle as well and how it is becoming a fleshed out friendship. 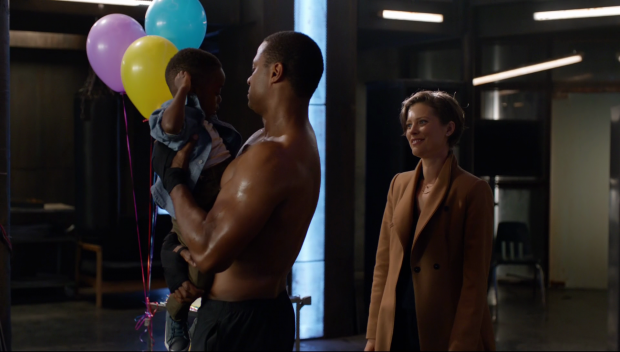 Another strong episode that continues the back to basics approach while developing the main themes of the season. Vigilante is a really good villain with an element of mystery while also holding a mirror up to Oliver and his choices. The question over whether Green Arrow is managing to get the job done is well handled and Oliver’s struggle with it is great to see. Quentin dealing with his alcoholism with the help of Thea is also great. I really like the dynamic between Quentin and Thea where she takes on the parental role in the relationship and helps him to deal with his issues. There’s a long way to go for Quentin but it is developing nicely.

The reveal that Evelyn is a traitor working either for or with Prometheus is a good one and makes sense for her character given her history for blaming Oliver for the death of her family. The rest of the team are still hit and miss with Curtis coming across as a liability more than anything else at this point. Diggle’s contribution to the episode wasn’t quite in character for him but it did lead to further bonding between him and Rene as well as a nice moment with Lyla. The flashbacks continue to be good value with Kovar coming across as a really good villain that I hope to see in the present day at some stage.