Arrow continues its final season victory lap by reminiscing about the show’s third season as Laurel deals with the loss of her world.

Many would argue that the Hong Kong flashbacks in season 3 are a chapter of the show’s past better left forgotten as time might be better spent on more popular aspects of what has come before. I wasn’t a huge fan of the Hong Kong narrative but there was a lot about it that was compelling so I’m glad that less popular elements are also getting an airing in the final days of Arrow. 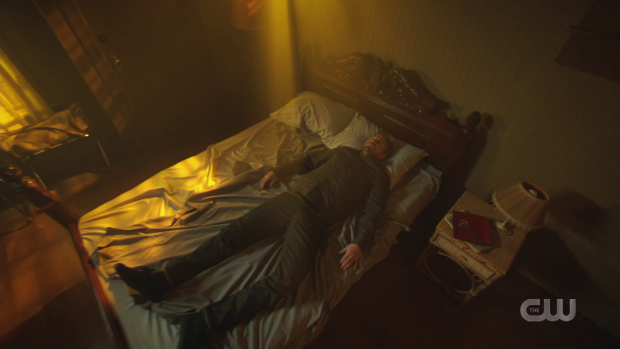 Bringing Rila Fukushima’s Tatsu back for this particular stroll down memory lane makes a lot of sense given how significant a presence she was back in those days. Another reminder of that time is the new version of the Alpha/Omega virus that also helps outline the personal stakes attached to the episode. Tatsu is always a welcome addition and her history with Oliver greatly enhances everything that occurs. The virus isn’t an interesting story by itself but it carries a lot of weight when considering what Oliver and Tatsu went through the last time it was a factor. There are reminders of Tatsu losing her son and how Oliver has never stopped regretting the events that led to that which offers strong emotional grounding. Tatsu is less than enthusiastic about what Oliver has planned around using the virus for bait to draw out China White and she sees his devotion to the Monitor’s mission as the same blind faith he placed in Amanda Waller. She basically doesn’t want to see history repeat itself with a lethal virus unleashed on innocent people.

It’s easy to see where Tatsu’s coming from as her perspective of Oliver back in season 3 was a man blindly following the orders of his superior. She didn’t know about the threats made against Oliver’s family or the full extent of his situation at that time so she made some incorrect conclusions based on limited information. The coming Crisis weighs heavily on Oliver and he genuinely believes that following The Monitor’s instructions is the best chance there is of preventing it. He doesn’t see that as blind faith initially and equates the destruction of Earth-2 with him deviating from the plan. While I see the principle behind that I find the execution somewhat lacking. It’s not in Oliver’s character to accept things at face value and I refuse to believe he wouldn’t question the validity of The Monitor’s claim that Earth-2 was destroyed because he interfered with the events of that universe. It’s fair that he shouldn’t interfere in the events at play because he’s not a natural part of that world but to say the universe was wiped out because he became involved is a bit of a stretch and Oliver should have more questions around that.

Not questioning The Monitor is justified in a way through his impassioned speech to Tatsu where he reveals that not asking questions is how he keeps going. He needs The Monitor to be right because otherwise all the sacrifices that have been made by him and others up until this point will have been for nothing. That’s not something Oliver is emotionally ready to deal with and he has a selfish need for his own family to survive which is perfectly understandable as far as personal investment goes. This is one of those situations where an actor’s performance can almost make you forget that what is being said doesn’t actually make a great deal of sense. It exists to justify what Oliver has been doing before now while highlighting that there are things he has failed to address but it makes no sense for him to not have those doubts before now. 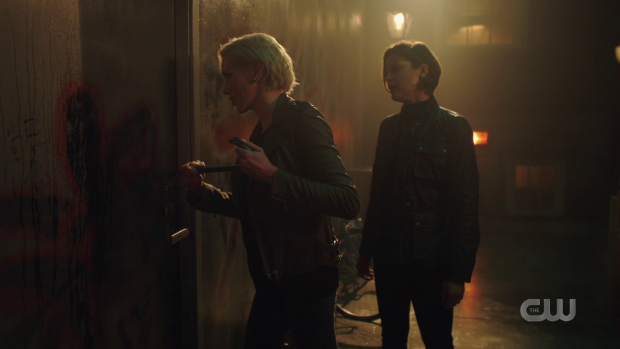 Thankfully it only takes until the end of this episode for Oliver to start asking questions. Tatsu almost losing her life as a result of Oliver’s reckless plan gives him the clarity to ask those questions and reminds him that some missions aren’t worth the cost that comes with them. Oliver has given up everything he ever cared about in order to join this quest to save the entire universe and hasn’t really stopped to question whether it’s worth doing. He plans to rectify this by heading to Nanda Parbat to see what he can find out so that he can make his own decision on the right thing to do. I’m glad steps are being taken to remove some of the mystique that surrounds The Monitor rather than him being this unknowable cosmic being who does little more than move the plot forward by setting Oliver down a path while refusing to explain why he sets that task. It’s something that would get old quickly and doesn’t suit Oliver as a character to continue accepting it. This also provides an opportunity for The Monitor to actually become a character which could be a very good thing.

Even though The Monitor isn’t really a character his behaviour at least appears consistent. The reasons for his missions are known only to him but when he was first introduced he had a big thing about people/universes proving their worth and it looks as if he’s doing something similar with Oliver. It could be that his objectives are actually pointless with the real aim being to test him under different circumstances to see if he reacts in a way The Monitor considers worthy. I wouldn’t be surprised if Oliver refusing to blindly accept the missions is the expected outcome and The Monitor will be more forthcoming after that but time will soon tell.

As Oliver says in this episode the stakes are as high as they can possibly get. I’ve mentioned in prior reviews that large scale stakes such as the multiverse being at risk can be difficult to equate to anything relatable but so far the writers are doing a great job. The episode opening with Oliver haunted by visions of those he has lost in the past combined with seeing alternate versions of them erased from existence was a really powerful way to make the loss of Earth-2 a personal one for Oliver. He recognises that the loss of an entire universe means the loss of people and if there’s one thing Oliver understands it’s loss. Stephen Amell’s performance as he is unable to reconcile what has happened is stunning and focusing on what he has personally lost to compound it was a really smart choice. 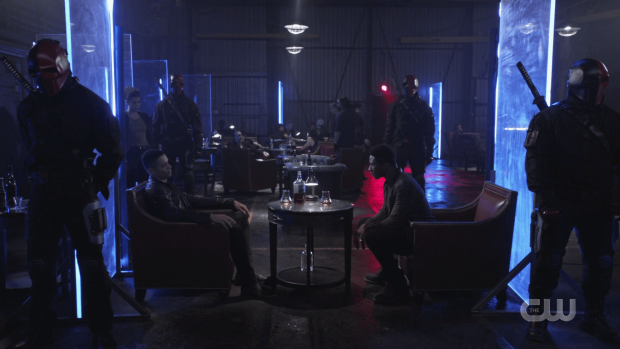 Another way the loss of Earth-2 is explored is through -no longer Evil- Laurel who can’t accept the reality of the situation. She goes on a fruitless mission to make her way back to her destroyed universe because the destruction of an entire universe is so unthinkable to her. At first she assumes the breach device is broken so goes to look for someone who can fix it for her. Tagging along with her is Lyla who offers her physical as well as emotional backup. Katie Cassidy’s performance as Laurel quickly moves through the stages of grief is excellent and Lyla makes for an appropriate sounding board for what she’s going through. Obviously nobody can find any way to equate the experience of losing an entire universe by Lyla draws on what she knows and finds an example of a time she had no control over losing people close to her. She also helps Laurel find a renewed sense of purpose by reminding her that she can do good on this Earth and help prevent what happened to hers happen elsewhere in the multiverse. Lyla’s affiliation with The Monitor is an interesting development that adds further complexity to an already convoluted situation.

There isn’t an awful lot to say about the future plot as what is going on there feels completely disconnected from the present day story. The conversation between Connor and John Junior was really well done and did a lot of good work fleshing out their dynamic growing up together but it’s hard to be invested in something that feels like it’s happening on a completely different show. If there is to be a spinoff with it’s own self contained narrative featuring these characters then it would make a lot more sense but at this point it feels like a distraction from the more immediate present day plot. The idea of Diggle and Lyla overcompensating by accidentally favouring the adopted son over the biological one is compelling as it serves as a reminder of flawed characters while also giving John Junior a defined reason to resent his adopted brother. There is definitely a close relationship that completely broke down and that’s rife for exploration but perhaps it would be better in a different show. 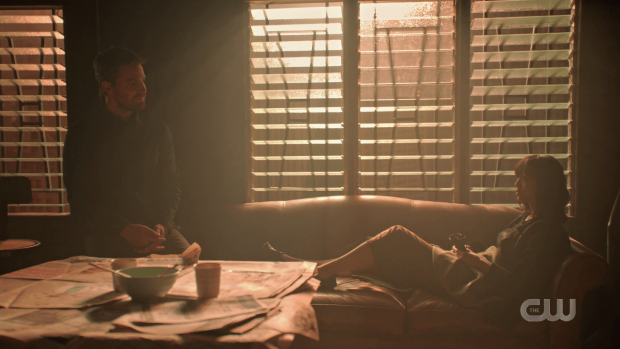 Another strong entry into the final season that manages to ground impossibly high stakes in meaningful characterisation. The loss of an entire universe isn’t anything that can be understood by anyone but making it about the people that have been lost and the impact it has on Oliver who is haunted by the losses he has already suffered was a really smart choice. Stephen Amell conveys this wonderfully and manages to almost justify Oliver’s out of character decisions through the strength of his performance. It doesn’t entirely add up but steps are being taken to correct this and it’s possible that The Monitor will become more of a character as a result of this. Tatsu’s inclusion in this episode works really well because of how she challenges Oliver by reminding him of what happened last time he was in Hong Kong. It highlights mistakes Oliver has made and warns him against doing so again while also revisiting a part of the show’s history.

Laurel’s reaction to losing her entire home universe is another example of grounding the impossibly high stakes. Katie Cassidy’s performance excellently conveys the stages of grief. Lyla tagging along on this plot to help her realise that she can honour those she lost by fighting to make sure it doesn’t happen again feels appropriate as well and the tease of Lyla’s involvement with the Monitor is compelling. The future plot feels even more disconnected from the present in a way that’s very distracting. Connor and John Junior’s dynamic is fascinating and their interactions are very watchable but it feels like part of a different show rather than something essential to this one which ultimately makes the whole thing feel like a pointless distraction.