“What We Leave Behind”

Arrow returns to the Prometheus story as his attack on Team Arrow escalates in a significant way.

There’s a meme going around questioning if season 6 of Arrow will have flashbacks from season 1. This episode shows that this is almost a possibility but also that it can work really well. The flashbacks weren’t from anything we ever saw but they do take place in the early part of the first season. Felicity isn’t even on the team yet and Diggle isn’t fully onboard with Oliver’s crusade to cross names off the list. 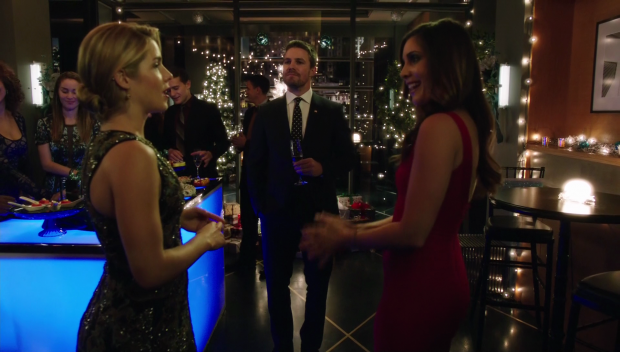 This isn’t awkward at all

I really liked looking back at the show in its infancy as it really shows how much things have changed since the early days. Arrow is a completely different show than it was back then and that’s sort of the point put across in these flashbacks. We see and Oliver Queen who is merciless and determined with only one goal in mind to contrast with the more thoughtful and regretful version that exists in the present day. Oliver has certainly developed over the seasons and his early days as the Hood almost seems like an embarrassment to him at this point since much of what he did was out of a misguided sense of loyalty to a mission he didn’t fully understand.

This has caused unintended consequences for him as Prometheus -surely he has to be voiced by Michael Dorn- is dropping hints that he is connected to an an early victim of the Hood. We don’t really find out much about Justin Claybourne (Garwin Sanford) but we learn everything that Oliver knows about him and that’s exactly the point. Oliver made an assumption based on very little information, gave him his one chance to turn things around and then put an arrow in him. Those were his tactics when Arrow began and the consequences were never considered which makes Prometheus’ vendetta against him all the more surprising.

The suggestion is that Prometheus is the illegitimate son of Claybourne behind the mask. This is never explicitly confirmed which makes me concerned that he will turn out to be someone close to Oliver either now or in the past. I think the son of a man he killed years ago makes the most sense as it provides that personal connection without trying to force it. Having someone develop an unflinching hatred from a distance over the years is really effective as well as the distance helps to fuel his desire for revenge. He knows everything about Oliver Queen in terms of his tactics, people close to him and his fighting moves but he doesn’t actually know Oliver Queen -as far as we know- and that makes his commitment to bringing him down feel a little more sinister. Prometheus only thinks about making Oliver suffer and can’t be reasoned with so this makes him very dangerous.

Oliver is outclassed by Prometheus in almost every way. He is constantly one step ahead of Oliver and Team Arrow by using his knowledge of Oliver’s past against him. I get the impression that Oliver has almost forgotten about the aspects of his past he is trying to put behind him which means that Prometheus has the advantage as his next move is unable to be anticipated. 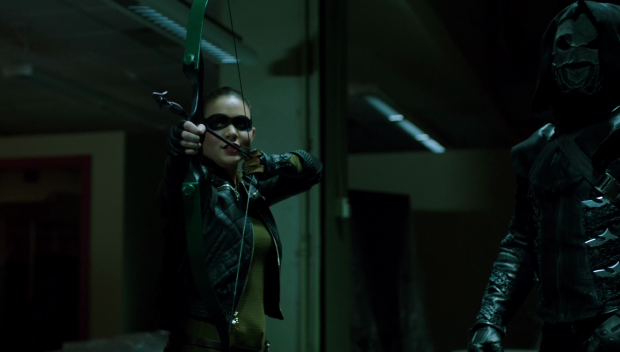 This pays off in a really shocking way when Prometheus sets a trap that forces Oliver to retrace his steps from the night he killed Claybourne. Cutting between him moving through the building in the past and present was really effective as it felt like the experience was haunting Oliver. Every single step was accounted for and it culminates in a showdown on the roof in front of a pool in both cases. Prometheus directly calls Oliver out on how he felt when he killed Claybourne and plays on Oliver’s emotional state to get the upper hand.

The shock comes when Oliver kills Billy who has been dressed in Prometheus’ suit. We as the audience don’t quite feel the loss because Billy has been such a non entity all season but the fact that Prometheus was able to expertly maneuver Oliver into a situation where he killed an innocent. It’s easy to understand why Oliver did it since he was on alert and had to fire first so that Prometheus didn’t have the opportunity to but at the same time he should have been more vigilant in confirming his target. It’s not a simple problem and the episode doesn’t pretend it is. I really didn’t see it coming as it’s a place these shows don’t tend to go. Prometheus killing Billy in  front of him or in front of Felicity is something I would have expected but making Oliver live with the fact he killed an innocent who happens to be close to someone he cares about is really brutal and the emotional heft is significant. Prometheus is exploiting what he knows about Team Arrow in really terrible ways that will have lasting impacts on them.

Oliver doesn’t try to hide this from Felicity or anyone else which definitely shows how far he has come since the first episode. Even last season Oliver might have chosen to lie about what happened and it would come out later to derail the team dynamic but Oliver accepts the responsibility and comes clean immediately. It’s refreshing to see this and unexpected given past behaviour. Felicity’s reaction was unexpected as well but it makes sense for her to blame Prometheus since she knows that Oliver would never consciously murder Billy. I imagine it will create some tension and uncertainty in the coming episodes but the reactions feel grounded in the characters and show that they are growing as people.

This episode also has Evelyn’s status as a traitor revealed to the team but it doesn’t quite have the impact that it should. She has been a background character all season so it never felt like she was an integral part of the team which means that the reveal has less weight to it. It makes the most sense given her history and open disapproval of the way Oliver used to do things but the team dynamic just isn’t strong enough to make the betrayal feel as devastating for all as it should. The reveal also doesn’t make much sense from a strategic point of view. What did Prometheus have to gain by having Evelyn’s betrayal become known at that point? It feels like she could have been a mole on the team for a bit longer. 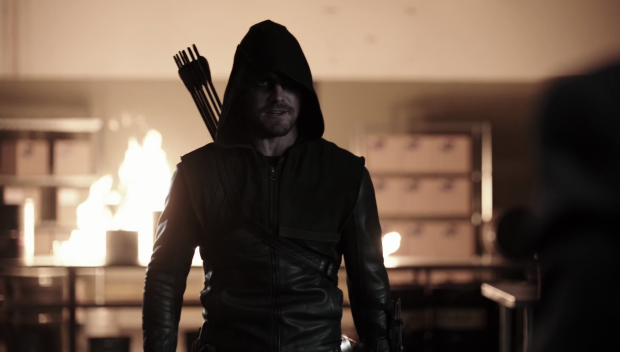 Evelyn’s betrayal becoming known does tie into the clear plan to tear Team Arrow apart from the inside. Quentin has already been destroyed, Billy’s death with leave Felicity heavily vulnerable, Diggle’s arrest will cause complications and Oliver’s crippling sense of self doubt is continuing to grow. The team are in bad shape and it’s going to be very difficult for them to bounce back from it.

Curtis had a lot of focus in having his life torn apart by finally addressing how his husband feels about his role on Team Arrow. Prior to this episode he had no idea what Curtis was really doing and thought he was building a Start-Up company with Felicity. Of course Felicity isn’t prepared for this lie and since Paul clearly isn’t an idiot he sees through it right away. Naturally he wants to know what’s going on and immediately jumps to accusing Curtis of having an affair. The ensuing confession and breakup is very well played by Chenier Hundal and Echo Kellum who really sell the fact that a loving partnership is ending. I wonder if this will inspire Curtis to give up his life as a vigilante because he has been more of a liability to the team than anything else and this latest setback tells him that this brings him nothing but misery.

Despite the lack of hope that fills the episode there is some positivity in there through both Thea and Oliver who have come to accept that their lives are worthwhile ones. Oliver has been inspired by what he learned from his fantasy to work harder in his efforts to make the city a better place. Thea has accepted that their parents would be proud of everything they have accomplished and everything they have become which suggests to me that she is truly beginning to move on with her life. She considers the fantasy reality to be a gift and looking at it that way gives her the perspective that she has been lacking. It’s a great step forward for Thea and for Oliver as they may be less hindered by their past which could prove to be important since that is what Prometheus looks to use against them.

The episode ends with the apparent return of Laurel which doesn’t really mean much as cliffhangers go other than the shock of someone being dead appearing to be alive. My main guess is that she is a grief induced hallucination that will help Oliver overcome his sense of self doubt and come back stronger. Alternatively she might be another part of Prometheus’ personal attack on Oliver Queen. Though let’s not rule out resurrection or an alternate universe considering everything that has already happened in this universe already. Join me in January and we will find out. 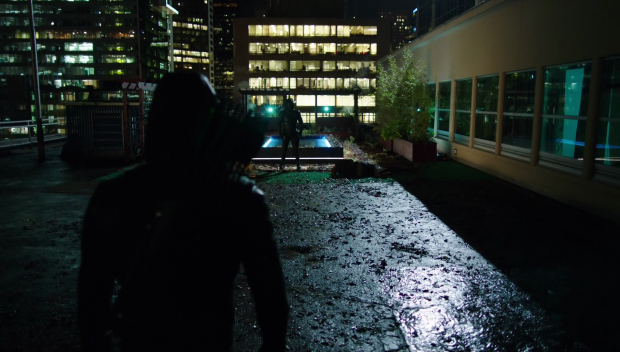 A great episode that really solidifies Prometheus as one of the best villains Arrow has had. His relentless attack on Oliver as well as everyone close to him makes him formidable and having the flashbacks be set during an unseen season 1 story was a clever touch. There are significant hints about Prometheus’ identity dropped and I hope he is someone who has become obsessed with Oliver without actually knowing him as that makes him more dangerous since there really isn’t any way he can be reasoned with.

Prometheus manipulating Oliver into killing Billy was genuinely shocking and resonates with Felicity as well but doesn’t have as much weight as it could since Billy has been a non entity so far. Similarly the reveal to the team of Evelyn’s betrayal doesn’t work as well as it should because the team dynamic is far from solid. These are minor flaws in a really excellent episode and I guess we’ll have to wait a few weeks to find out how Laurel can be alive. 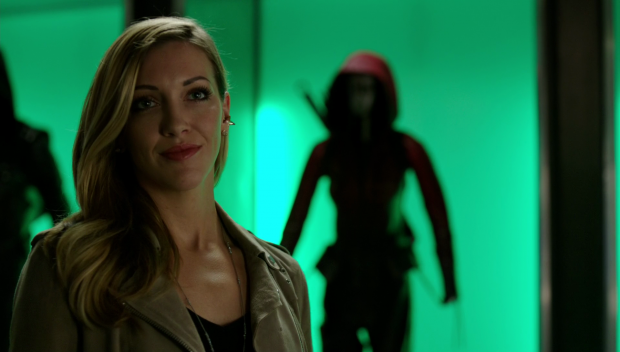