Batwoman ploughs on with a mixed bag of character interaction and gradual steps to develop Kate towards the hardened vigilante seen in “Elseworlds, as well as some development for the secondary characters.

At every point in a hero’s journey they reach a crossroads where they question whether or not what they’re doing is worth the sacrifices they’re making to undertake it. Batwoman, however, does things a little differently. Kate is already contemplating abandoning the charade, since she only intended to use the cape and cowl as tools rather than an identity, and since Alice knows the face beneath the mask it’s useless as a weapon against her. However, the damage has been done, and with Gotham’s populace now being afforded a glimmer of hope in their belief of the Dark Knight’s return, she now feels the weight of responsibility in their expectations that Batman will continue to watch over them, the lack of a shadow soaring across the nocturnal rooftops provoking more questions with each passing day. Also, by taking on the mantle the enemies of Batman have been drawn out, potentially making things worse for the city. However inadvertently, Kate blew on embers that have been glowing for three years, and one way or another she now has to deal with the flames staring to burn. But first, there’s the matter of resurfacing family issues to address. 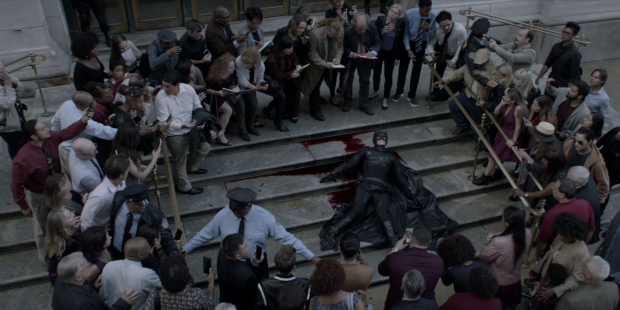 One of the things I liked about Batwoman’s pilot episode was the injury time revelation that Alice was actually Kate’s presumed-dead sister. I don’t meant the reveal itself; it was clear from minute one this was how it was going to play out, partly because it lines up with Alice’s comics backstory and partly because this is the CW and vendettas in one way or another always come back to family. No, I liked it because Kate’s deduction meant it wasn’t going to be kept as something to be shockingly uncovered later in the season, leaving the audience frustrated with being so far ahead of the characters in figuring out a mystery’s painfully obvious solution. The early reveal prevented it from being dragged out, but unfortunately has now served to replace one stagnating plot point with another.

Alice being hung up on how her family stopped looking for her is swiftly becoming irritatingly repetitive. Since we are yet to be given any information about what happened to her after the car fell of the bridge, we have no context with which we can assess how justified her anger is, and so being constantly reminded of the same point without actually progressing it is less like a developing plot point and a reminder of villain motivation, and more like the tiresome whining of a small child. Additionally, since the last episode showed just how long Jacob and Kate spent searching for Alice, her claim that she was abandoned doesn’t hold much weight. It’s entirely possible that she was conditioned to believe that nobody loved her enough to find her by whoever it was who rescued her, carrying that resentment into adulthood. But until we actually see such a backstory – along with, one would assume, who taught her to fight at a level to take on a woman with some training in military tactics and a lot more in mystic endurance trials – we’ll have to keep putting up with her constant declarations of petulant indignation. “You are going to be very annoying, aren’t you?” Alice states to Kate in an early scene, seemingly without a hint of irony.

Down Down Down refers to Alice’s assessment of where the sister Kate remembers has gone, in spite of the latter’s steadfast belief that she still exists, however deep she has become buried beneath layers of hurt, resentment, heavy makeup, bad hair and a penchant for literary quotations. Kate refuses to give up on her, but seeing as she’s the only one who believes in the possibility of her redemption, Alice included, she’s facing an uphill struggle. 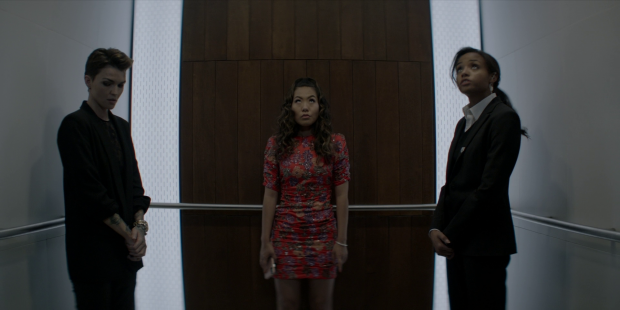 This episode sees a new character introduced in the form of Tommy Elliot (Gabriel Mann), an old rival of Bruce Wayne who now claims victory over him by having a taller skyscraper, and although not intended as a phallic euphemism, for all the subtlety of the declaration it might as well be one. His arrogance is not entirely dissimilar to Nolan Ross, the tech mogul Mann portrayed in the camp and gaudy trashfest Revenge, and his smarmy condescension is perfect for his inevitable reappearance as the villain Hush. However, this has the potential of introducing a problem with which the CW has precedent.

In the early days of Supergirl before the plot became more streamlined, there was a tendency to have Kara face off against traditional Superman villains instead of her own rogue’s gallery, while episode stories have sometimes repurposed Superman plots to fit her. Hush is one of the best Batman comic arcs this century, but the introduction of its eponymous villain sets an unfortunate precedent of similarly recycling Batman villains to use against Kate.

Anyway, the arrogant and obnoxious businessman is unsurprisingly revealed to be a bad guy at a self-congratulatory party thrown by himself, with sabotaged lifts intended to draw Batman out of what he perceives as hiding, which forcing Kate to suit up with her more colourful spin on the Caped Crusader and take responsibility for the genie she’s let out of the bottle, first by facing down the suited sociopath wielding a stolen handheld rail gun capable of firing bullets fast enough to pierce the Batsuit’s armour. It’s revealed Tommy is resentful of Batman for saving his mother from a car crash and thereby robbing him of a vast inheritance, embodying the inflated sense of entitlement and lack of empathy felt by the 1% he represents. Although he’s now been shipped off to Arkham Asylum, anyone even vaguely familiar with the Batman mythos will be well aware of just how competent the security is in that place, so there’s little chance this is that last we’ve seen of him. 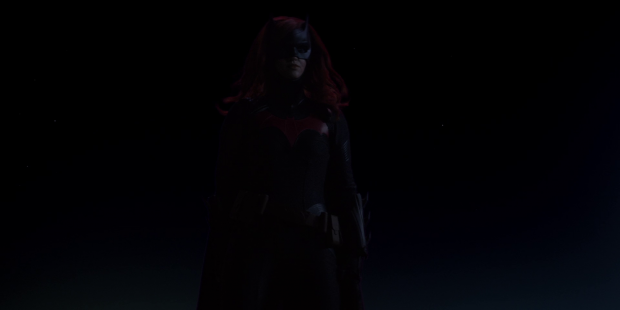 Suiting up. For real this time.

Although very much a B-plot, the episode’s highlight is Mary and Sophie being thrust together. Jacob decrees the former requires a bodyguard after her life-threatening encounter with Dodgson in the previous episode, something she seems rather blasé about and just wants to get on with her life. Sophie, meanwhile, uses the opportunity to fish for information on Kate, showing that although now married she is still to completely get over her former lover, reinforcing the inexorability of the love triangle that will emerge, again inevitable because we’re watching the CW and such a relationship dynamic is as standard as it is tiresome, and one which will be further complicated by Reagan (Brianne Howey), the cute bartender with whom Kate sparked a quick connection that went beyond surface attraction. As an aside, if you ever watched werewolf drama/horror Bitten you’ll be intimately familiar with what Greyston Holt (Sophie’s husband Tyler) looks like in a state of undress, so I can only imagine the writers room frantically attempting to conjure an excuse to have him shirtless with his muscles rippling all over the screen.

It’s unclear if the Mary’s hostility towards Sophie is more due to her unwanted presence as a bodyguard or as Kate’s ex who broke her heart, but either way her attitude to the tacit declaration she can’t take care of herself is an indicator of a strength of character and someone determined to live her life the way she wants to regardless of what anyone else says. The dual aspects of her intelligent doctor and party girl personae are simultaneously embodied by navigating a field of debris and crushed limbs in towering heels and a short dress to help some critically injured people. While her character doesn’t exist in the comics and was created specifically for the show, she has significant echoes of Bette Kane, another of Kate’s cousins and one who becomes the vigilante Flamebird, a female counterpart of Nightwing. Whatever may or may not be planned for her in the future, for now she continues to be a highlight of the show and a welcome presence.

Elsewhere, Luke is still sidelined in a role providing expository dialogue about whatever Wayne tech is pertinent this episode and is yet to become much of a character in his own right, and Jacob still has little purpose other than to not be convinced that Alice is his daughter. Also, last week’s revelation that Catherine is up to some kind of backstage nefariousness is yet to pay off, and is only even more cryptically alluded to by some playing cards left behind by Alice after breaking into the Kane home and playing mind games over the phone. My Google-fu has unfortunately been unable to decipher their significance, but Catherine’s reaction to them strongly suggests some yet-to-be revealed connection between the businesswoman and the madwoman, the unveiling of which is set to further convolute an already tangled web of connections. 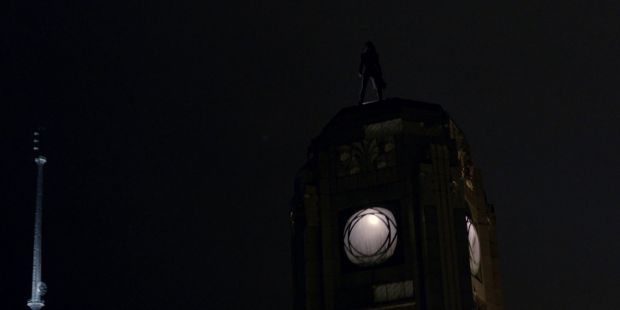 While Batwoman is gradually progressing towards finding its footing, it seems to be stagnating in watchable mediocrity. Yes, it’s still early days for the show, but so far it’s been little more than one long origin tale rather than a story eager to establish itself and forge its own path. Kate’s journey to becoming a hero in her own right rather than just an imitation of Batman is still compelling, and Mary acting as the heart of the show provides it with something other than doom and gloom. The dynamic of the supporting cast is less stable, with most of them having little to do other than serve as plot devices, which will need to be addressed soon if the show is to appear anything other than distinctly average.