“The Book of Rebellion: Chapter One: Exodus”

Khalil and Jennifer go on the run with Tobias and Jefferson scrambling to find them in a chaotic episode of Black Lightning.

I’ve always said that flawed characters are far more interesting than those written as if they always make the right decision. Jennifer is a great example of a flawed character as many of the decisions she makes are clearly not in the best interests of her or anyone else though they still make sense given her current mindset. 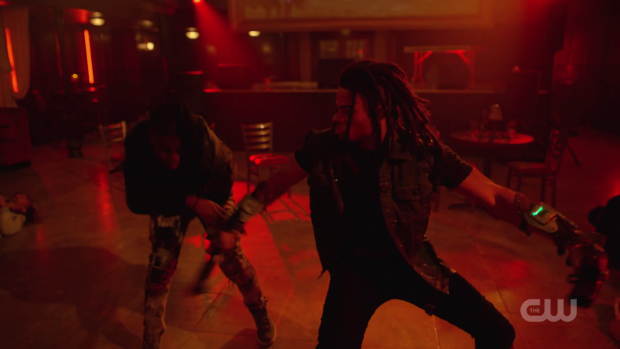 Jennifer has been feeling trapped all season because her parents basically won’t let her leave the house because they feel that doing so is too dangerous both for herself and others. There’s no arguing with that assessment because an inability to control her powers has been clearly established but that doesn’t mean Jefferson and Lynn have went about dealing with it in the right way.
Running away with Khalil has a complicated thought process behind it. On a basic level she recognises that Khalil is in trouble and needs help so risks her own life to provide that assistance. She clearly cares about him and risked a lot last week to get him to safety so staying with him out of a desire to continue to protect him is an extension of that. She may not be selfless and heroic but she will put herself on the line for those she cares about.

On a deeper level going on the run is to send a message to her parents. It’s an extreme reaction to feeling like a prisoner in her own home and makes it clear that imposing that on her was not the right way to deal with it. Doing so caused her to doubt how much she could be open with them because which explains her keeping her continued connection with Khalil a secret from them so this is a direct consequence of the parenting mistakes made by Jefferson and Lynn.

Amusingly Khalil and Jennifer are really bad at going on the run. The first mistake is made when Khalil pretends to collect the taxes owed to Tobias without considering that there would be a bounty on his head after defying him so obviously. It should have been obvious but it’s also not something Khalil is used to so the mistake is understandable and ends up being costly for them as it results in a firefight that attracts so much unwanted attention. 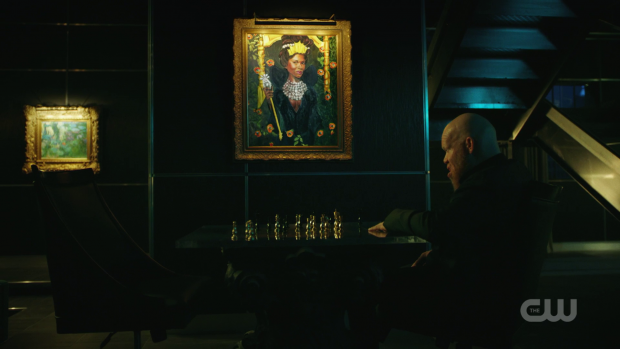 Tobias has his quirks

The funniest thing about the way Jennifer and Khalil go about staying ahead of everyone on their tail is that their lack of experience ends up being their greatest asset. Since neither of them have any idea where they’re going or what they’re doing they manage to be unpredictable and therefore hard to find some of the time. Hiding out at Khalil’s aunt’s house admittedly wasn’t the smartest tactic but it did take long enough for them to be found so it was lucky in some respects. It’s bizarre that Jefferson doesn’t use his electric vision to locate them easily when they were in the woods which makes for clumsy characterisation to further the plot.

Jennifer and Khalil’s relationship continues to be a strong one as they are basically a pair of hapless teenagers with feelings for one another that they have no idea how to process. As such everything is an overreaction such as Khalil’s standoffish reaction to Jennifer’s insistence that she contact her family to let them know that she’s ok. At first he doesn’t recognise how important this is to her but eventually calms down and lets her do it because he understands that it’s not easy to turn your back on people that are important and recognises that Jennifer’s support system is something she values.

Her decision to leave has a profound effect on the Pierce family. Jefferson rushes right into action and takes to the streets as Black Lightning to track them down with Anissa backing him up. She’s also there to give him a reality check and point out that his parenting methods led to what is happening now. Despite her working with him over the past few episodes she hasn’t forgotten how suffocating their influence could be and that it resulted in her leaving home to get away from it. Jefferson and Lynn absolutely mean well but their way of showing it is far from ideal. It’s something that needs to be recognised and dealt with though it’s difficult to do so when Jennifer is on the run. 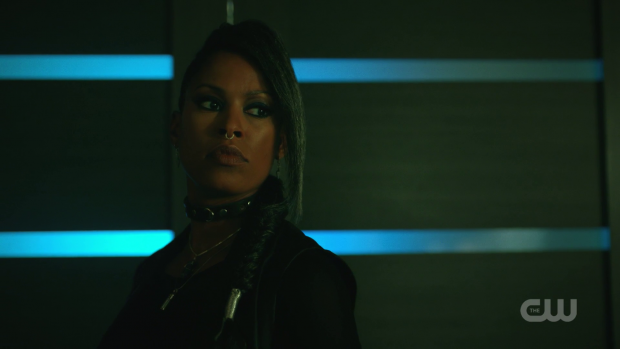 Jefferson’s need to take action is contrasted by Lynn’s feelings of helplessness as she can do very little other than sit tight and wait for Jennifer to come back. This frustration and grief manifests through her destroying Jennifer’s room just so that she can do something. It’s definitely not healthy behaviour and shows how difficult it is to accept what has happened as well as her own failings that had a part to play in causing this. This didn’t entirely work for me as Lynn has always been characterised as being good in a crisis. Accepting that Jefferson routinely puts himself in danger was a large part of her arc in season 1 so I would expect her to be more level headed in this instance since she has no reason to fear the worst and knows that Jefferson will stop at nothing to get Jennifer back. I see what was to be achieved by her acting out in this way but it comes across as overly melodramatic and feels at odds with Lynn’s established traits.

Tobias’ new assassin, Cutter (Kearran Giovanni) is a great addition and participates in an excellent combat sequence with Khalil. One thing that has been consistent this season is excellent hand to hand combat. Cutter’s dynamic with Tobias is fun to watch as well. The key component to it is that she’s not afraid of him as shown by her refusing to be intimidated and keeping their conversation about what it is he needs her to do. They have a fun back and forth that I hope to see further explored in the coming episodes. Cutter is largely characterised by what she is hired to do at this point but the promise of a past that carries some significance between them is rife for exploration.

Tobias continues to build as an even more significant threat to Jefferson in his role as Black Lightning as well as in his personal life. Jennifer is on his radar because of her association with Khalil and Black Lightning’s pursuit of her reminds him of his appearance at the Motel in the first episode that saved her life as well as Anissa’s. Tobias isn’t stupid and is clearly starting to put the pieces together that will eventually lead him to Jefferson. Knowing the true identity of Black Lightning will make him infinitely more dangerous while putting Jefferson in a position where he will have to kill Tobias to protect both his secret and his family. This alone makes this episode feel more broadly consequential as it furthers the antagonistic relationship between Tobias and Jefferson using background details. 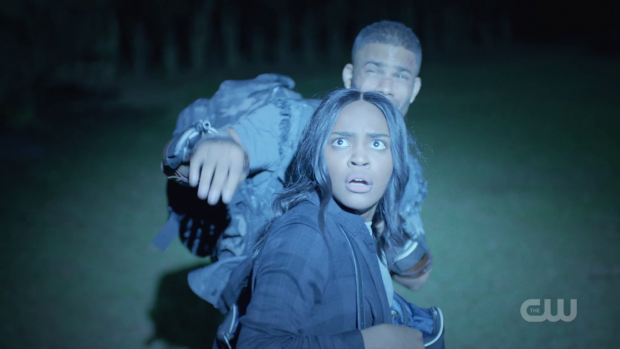 On the run again

A strong episode that narrows the storytelling focus in ways that compliment the main narrative while telling a smaller scale story about Jennifer and Khalil. On the whole this episode almost qualifies as disconnected from the main narrative as the focus is almost entirely on Khalil and Jennifer on the run or how others react to it. It’s impressively chaotic because of their lack of experience at this sort of thing and focuses on character relationships whether that be Khalil and Jennifer or dredging up Anissa’s reasons for leaving home. There are some missteps such as Jefferson not thinking to use his electric vision to easily locate them in the woods or Lynn’s melodramatic reaction to the situation but on the whole this is an exciting viewing experience that differs from the norm as far as Black Lightning goes. At some point the show will need to focus on other things like world building but or now Jennifer and Khalil’s attempt to evade everyone carries the show nicely.

Cutter is a great antagonist who has an engaging dynamic with Tobias. The key component to their relationship is that she’s not afraid of him which means that he respects her a great deal. Broadly speaking her function within the plot is to serve as his assassin but there is the promise of depth through the mention of a back story. Her use in this episode is more than satisfying especially with the hand to hand combat sequence she shares with Khalil. Tobias also continues to be engaging especially now that he appears to be putting the pieces together that will help him learn that Jefferson Pierce and Black Lightning are one in the same.