Black Lightning takes a break from Freeland and the Pierce family to set up a potential spin-off fronted by Jordan Calloway’s Khalil Payne.

Backdoor pilots are a very strange fixture of television. Taking an episode out to lay the groundwork for a potential spin-off that might never happen could be seen as a waste of time that could be better spent developing the story being told in the actual show. The CW has had a shaky track record with backdoor pilots in recent years with Supernatural failing to have a spin-off greenlit on two separate occasions, Arrow having a direct spin-off passed on and the fate of the proposed The 100 spin-off still in question so it’s up in the air whether Black Lightning can accomplish having its legacy live on through the exploits of Khalil. 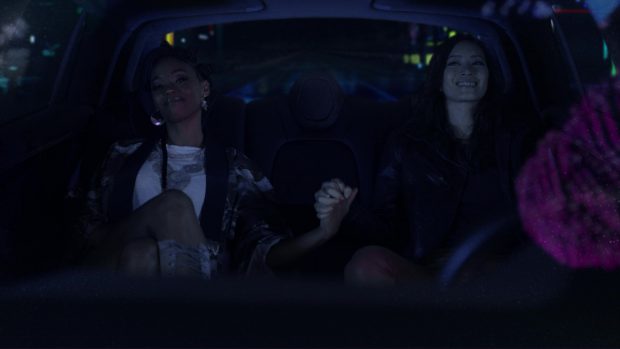 Getting away from it all

There’s an advantage here as Khalil isn’t an unknown entity within the world this show inhabits having been a significant presence in prior seasons so there is already a familiarity with the character and what value he brings by himself. In theory there’s built in interest from an audience point of view because his background is known from prior seasons so the test is whether this proof of concept is enough to convince audiences to watch a show focused on him.

With this being an episode of Black Lightning characters from that show have to be featured. Anissa an Grace appear having chosen Akashic Valley as their Honeymoon destination and get caught up in the plot when Grace is kidnapped during their first night out. It’s an unfortunate circumstance but something that can be expected for them at this point. Their agency within the narrative is minimal with their clear purpose being to provide a tangible connection to the events of Black Lightning. They are a passive presence designed to basically observe the projected status quo for Khalil as the audience understands what to expect from a potential spin-off.

One of the more strking things about this episode is the setting. Akashic Valley is a distinct and well designed location that stands out from anything else the Arrowverse has offered so far. There’s a futuristic quality to the aesthetic and there are clearly a number of elements at play within the borders that can be expanded on. The focus in this episode is in one particular direction but there are hints at other players in an intricate game that governs the location. This is unsurprising considering how intricate Freeland is so the skills are definitely there among the production team to create locations that function as characters in their own right. This episode only has time for a small look but it’s clear there’s a much larger mechanism at play and that by itself will be interesting to explore. 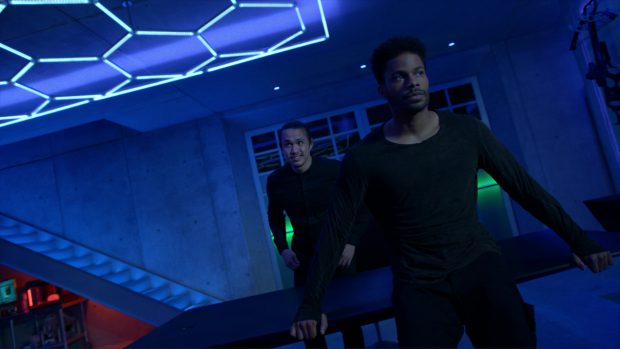 Every hero needs a place to hang their hat

Khalil is working to find his place within that and operates as something of a soldier of fortune looking to improve things for those that need help. He has a support staff in his tech guy Philky (Alexander Hodge) and a doctor named Donald (James Roch) who are able to back him up. In true Arrowverse tradition he also has a base with a big screen that people can talk around so in terms of formula there’s plenty of familiar elements that audiences can latch onto.

Not a lot is given about the supporting characters but there are definite baselines to build from. Philky helps Khalil control the Painkiller programming that resides within him and in exchange Khalil enables his research through providing a lab for him. Their connection feels natural enough despite some clunky exposition heavy dialogue to explain why the setup exists and Philky could certainly be used to great effect with more time to develop. Donald is somewhat indebted to Khalil who helped him when he really needed it as explained in his own exposition heavy scene. That one is more natural because Anissa is there to ask the questions therefore providing an acceptable forum for him to explain who he is and why he works with Khalil. There isn’t much to be said about the team dynamic as there isn’t a lot of time to get a sense of it but the potential is definitely there and, as with the setting, there is plenty to build on.

Khalil himself remains as interesting as he ever was. A big part of his character is the duality between the Khalil and Painkiller personas. Instead of keeping Painkiller caged inside his mind as was shown before he openly interacts with it and they bounce off one another in really compelling ways. They are separate people with defined personalities and their own motivations. Painkiller is a dangerous presence in this episode especially because the directive that has him kill any member of the Pierce family on sight is still active so Anissa’s presence keeps him very close to the surface in a way that projects a constant sense of danger while serving as a reminder of why Khalil left Freeland in the first place. 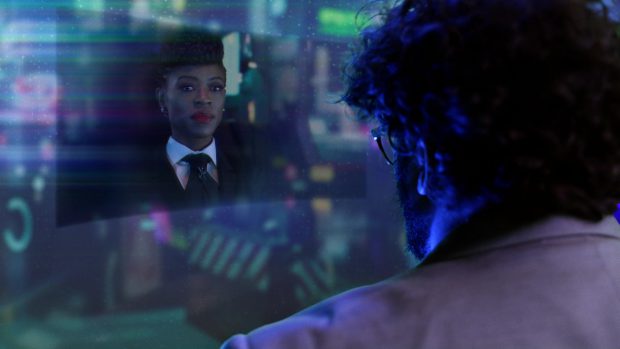 She doesn’t do much more than that

There is more to Painkiller than that directive and his relationship to Khalil is a wonderfully complex one. They challenge one another in really interesting ways with Khalil being forced to admit that Painkiller is useful to him on occasion. They keep one another sharp as shown by The Matrix influenced sparring that goes on inside their mind and challenge each other repeatedly. They differ in their views on a lot of subjects but there’s value to the connection for each of them. Khalil’s fear of this presence that lives within him is a great source of tension as well and Jordan Calloway’s performance in both roles is always excellent. It’s clear that the intent is to make that duality central to the potential show and there’s lots of opportunity to play around with that.

The moment where Khalil steps aside to let Painkiller take over in order to win a fight where the odds are stacked against them is built up to throughout the episode and really satisfying when it happens. Painkiller’s points around having a vested interest in working with him because the death of one means the death of another is a really simple but highly effective motivation for him to be on his best behaviour at times. There is a sense that he is biding his time before being able to take over completely but for now he seems content showcasing his worth in particular circumstances. Khalil convincing him to step aside when the facility is about explode hints at Painkiller’s ability to be reasonable as well as suggesting that his directive to kill the Pierce family doesn’t define him. It’s expected that the Painkiller persona be established as being more than software taking root inside his brain and content like this is a strong step forward in that direction.

Khalil reiterates his inability to trust himself around Jennifer and the other members of the Pierce family in his final interaction with Anissa where he makes her promise not to tell Jennifer that she knows where he is. As scenes go it’s largely an excuse to deliver a conclusion that is relevant to Anissa who remains a passive presence in the narrative which is necessary for a backdoor pilot but not necessary from a storytelling point of view. All the scene really does is spell out what has already been well established throughout though the back and forth between Anissa and Khalil is really engaging. If the episode featured more meaningful interactions between them then it would definitely be stronger.

Maya (Sibongile Mlambo) is established as the main antagonist that could carry into the potential spin-off and she is where the episode is at its weakest. It’s impossible not to compare her to Tobias who is threatening, charismatic and complex where Maya is decidedly one note. She takes the form of an operative pulling the strings from afar with the mystery around why she is cryptojacking people’s brains. It connects to Khalil in that it’s the same technology used to create the Painkiller persona though the reasons for it in this case are very different if not explained. It’s difficult to gauge whether Maya could be an engaging presence because everything she does is so painfully by the numbers in this outing. Revealing her connection to Odell carries very little weight because being related to an interesting character doesn’t make her interesting by itself. Her presence does successfully add to the tapestry of the setting and shows that there’s a lot of potential for different elements to be used within that but she’s a cookie cutter antagonist with limited personality which is unfortunate given that the rest of the setup is so strong. 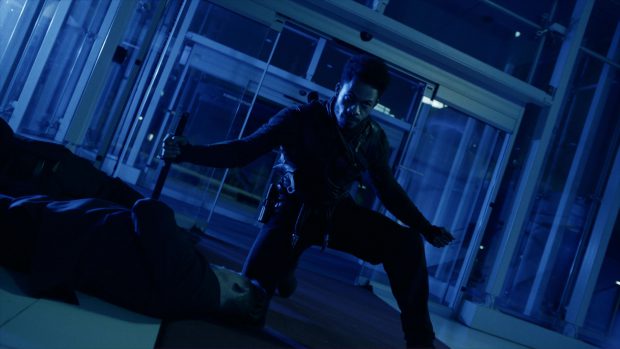 Painkiller has his uses

An engaging backdoor pilot that outlines a lot of interesting potential that could be carried into a new show with an excellent leading performance, a great setting and strong characterisation. One of the immediately striking things about this episode is the setting. The futuristic aesthetic stands out and there’s a sense that there are a lot of fascinating elements that could expand the background should the show come to fruition. Khalil’s supporting cast are interesting enough so far with clear potential as to how they could develop given more time. There isn’t a lot to them in this episode though that’s understandable considering the focus on laying the overall groundwork. Khalil remains as interesting as he ever was. The duality between the Khalil persona and the Painkiller persona is brilliantly used and capitalised on at several key points in the episode whether that be them challenging each other inside their shared brain or admitting that there are times where it’s useful for the other to be in control. It’s a fascinating ongoing conflict that could almost carry the show by itself. Jordan Calloway’s performance in both roles is excellent

The weakest aspect of the episode was Maya who fails to be an engaging villain with a vague mysterious plot centred around her that connects to Khalil in a personal way. She does fit into the tapestry of the setting but everything she does is painfully by the numbers which really stands out in the midst of the other content. Anissa and Grace’s passive presence is necessary for the structure of a backdoor pilot but it really stands out that they are present just to witness the plot or ask questions that explain the setup being introduced. Khalil and Anissa’s final scene together works really well from the point of view of an engaging and natural interaction even if it repeats well established information.