DC’s Legends of Tomorrow heads to Memphis in 1954 to save Rock and Roll by helping Elvis Presley get his groove back. 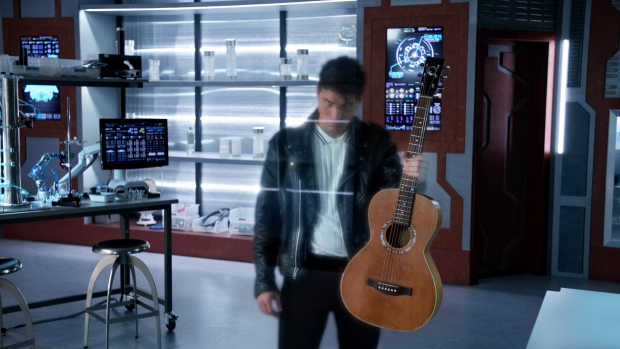 the curse of the haunted guitar

I’ll immediately admit that I know very little about Elvis Presley other than his songs and iconic cultural status so I have no frame of reference for whether his depiction here is in any way accurate. The Legends meet him before his music career even begins and he’s waiting to be discovered so this is a snapshot of him at a fairly normal time in his life. His love of music is there as is the talent but he hasn’t experienced the trappings of fame yet so he’s something of a blank slate as the writers get to explore Elvis before he became how history remembers him.

The episode does succeed in delivering a character dealing with issues of self confidence and a connection to something that he’s unable to rationally explain but I’m not sure if this needed to be Elvis as nothing about this felt unique to him. Luke Bilyk -with Jess Harnell doing the singing- impresses in the role but to me he could be any musician struggling with a family member who doesn’t accept his dreams and gets in the way of them being pursued.

Elvis gets the attention of the team when mass hysteria is recorded in 1954 Memphis which causes history to change in some largely unimportant ways. Guitar Hero becomes Trombone Hero, Mick’s Rat changes name from Axl to Josh Groban and Nate stops wearing product in his hair. All of theses things are inspired by the proliferation of Rock and Roll and without Elvis the timeline is missing something very definitive. 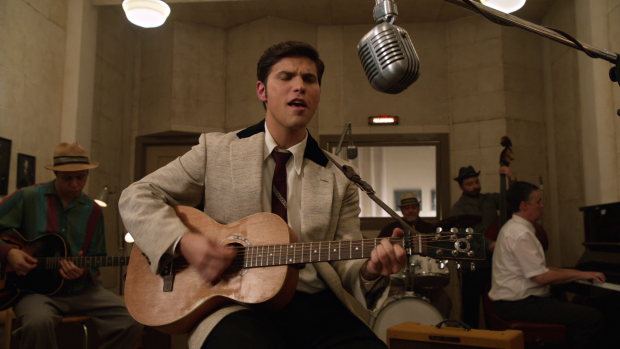 Nate takes the lead on this assignment because he’s an Elvis fanboy who relishes the idea of hearing Elvis perform live before he’s famous and being there as he cuts his first record. It’s any fan’s dream to be there on the ground floor and be watch their favourite thing get its big break. Nate also sees this as an opportunity to give Amaya insight into a very important interest of his and hopefully let her share in his enjoyment of that. This works because it plays out as a couple working to find common interests and enjoying learning more about one another.

Naturally Nate has his work cut out for him when the bond between musician and instrument is made more literal when it is revealed that Elvis’ twin brother Jessie who died in the womb accompanies him on stage -literally- in spirit. This happens because his guitar houses the sixth totem known as the “Death Totem” which summons the spirits of the dead when he plays. Nate needs to convince Elvis that his talent has nothing to do with his dead brother and everything to do with his own capabilities so that he can take the totem aboard the Waverider for safe keeping.

This is where the self confidence angle comes in. When Elvis’ guitar is switched with a fake he loses the ability to play well because the spirit of his brother isn’t present to inspire him. For Elvis this is essentially a deal breaker and it becomes apparent that he will need to wield the totem in order for the timeline to be restored. Once the guitar is returned to him he is able to cut his first record and all seems right with the world. 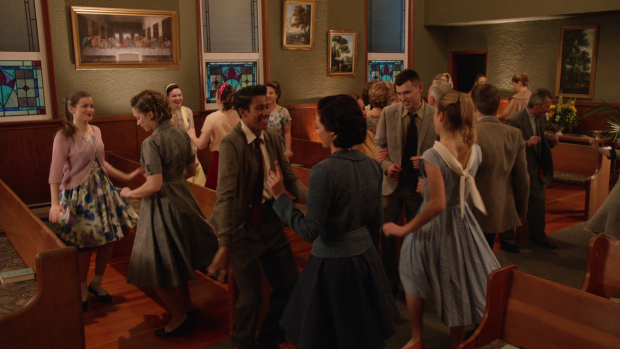 Wally shows off his moves

Further complications arise when Elvis’ Uncle Lucious (Geoffrey Blake) barges in to prevent the record from seeing the light of day because he associates rock and roll with the Devil. It’s a somewhat needless complication that seems to exist to do little more than pad out the running time of the episode. In general this episode often lacks tension and the lack of a credible threat for much of it is a big part of why. Elvis’ Uncle isn’t exactly the most engaging of antagonists and trying to raise the stakes by having Elvis, Nate and Amaya sent to a Memphis prison cell lacks any real sense of jeopardy. It does allow for a decent moment between Nate and Elvis where Nate encourages him to let his talent do the talking and not be caught up by his connection to his dead brother. Leaving the totem with him really isn’t an option so helping Elvis realise that he has what it takes is paramount to preserving history.

Uncle Lucious isn’t entirely the pantomime disapproving family member for the entirety of the episode. Wally and Amaya are able to convince him to let Elvis pursue his own path thanks to a heartfelt speech from Wally comparing this situation to his relationship with Joe. It helps Lucious see things from Elvis’ point of view and stop being a barrier to him following his dreams. This further pays off when Elvis is able to prove to his Uncle that rock and roll isn’t by itself a bad thing when he uses “Amazing Grace” to control the attacking ghosts and encourage them to go back to their rest.

The appearance of said ghosts is the only real tension in the episode. Elvis’ music combined with the death totem awakens the dead from their eternal slumber and they start terrorising the town. Thanks to his connection with Jessie he understands that the dead simply want acknowledgement and that knowledge is what allows him to solve the problem. The symmetry of the situation both beginning and ending with music is effective and Elvis saying goodbye to Jessie while thanking him for everything works as a moment of growth for him. 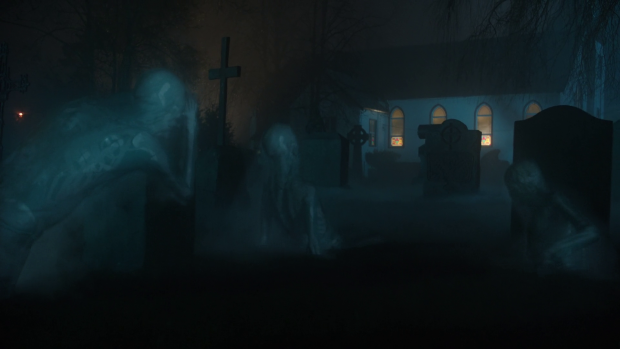 The dead have ears

Elvis’ rendition of “Amazing Grace” is appreciated by Amaya who acknowledges it as her “musical” moment with Nate which encourages her to share the music of her people with him. This scene is a little clunky as it’s unclear whether Amaya is being serious about enjoying the music she lets Nate hear. We as the audience don’t hear it and Amaya conducts the whole scene with a wry smile suggesting she’s taking a rise out of him. There is a definite serious undertone to it as she tells him she loves him when he can’t hear it with a pained expression on her face obviouslt hinting at the heartache that is soon to come for them.

This is the first episode where Wally is a proper member of the team and he definitely has trouble fitting in. His almost obnoxious use of his speed irritates those around him and there’s a general sense that his presence upsets the team dynamic. This doesn’t hurt the show as teething problems are expected and spending an episode letting him adjust to being part of the team while they learn how to take him is definitely a good idea.

Pairing Wally with Zari is an inspired choice as she has the most recent experience of being new to the team so understands where he’s coming from in terms of adjusting to the dynamic. She’s the one to give him the key piece of advice that lets him adjust his approach and realise that he has to spend time assessing the situation rather than trying to use his speed  all the time. He also learns not to show off after persistent reminders of how annoying it is when he does so. Zari’s annoyance at him beating all of her high scores on Ms. Pacman among others is a particularly amusing moment. Wally continues to prove to be a good fit and I like that he keeps the rest of the team on their toes. 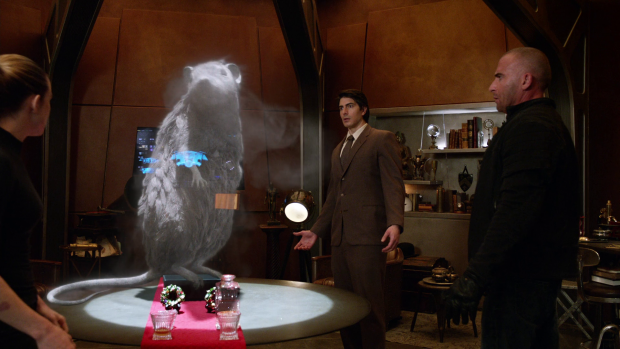 Mick is up to his usual antics in terms of being agitated and looking for food but the death of Axl aka Josh Groban offers very slight insight into his mindset. Ray tries to console him after the rat dies by reminding him that it lived a long time for a rat and that they can get him a new one. Mick responds by pointing out that it’s yet another change that he has to deal with. He has been weirdly separated from the rest of the team lately other than providing muscle on missions and this suggests a reason as to why that is. It could be that he’s less than enthusiastic about letting people get close to him because he has had to say goodbye to two team members this season alone, one of them permanently. Wally isn’t someone he wants to get to know at this point because he fears that there will be more changes to come and doesn’t want to be emotionally invested.

The rat funeral may seem ridiculous at first glance and it absolutely is but it’s also important. Ray acknowledged Mick’s position on change and loss and makes a point of marking it in some way. Axl aka Josh Groban was important to Mick so that loss is worth acknowledging as it can serve as a reminder that the team are there for one another. This season has built up the family angle significantly and scenes like this show how effective this development has been. Sara may find it ridiculous that they’re holding a funeral for a rat but since it’s important to Mick she actively participates. It’s actually quite a sweet moment that enhances the familial bond and provides a few laughs at the same time. It was also amusing to see them chasing around a rat ghost. As I said last week, silly doesn’t always mean stupid and this plot is another great example of that. 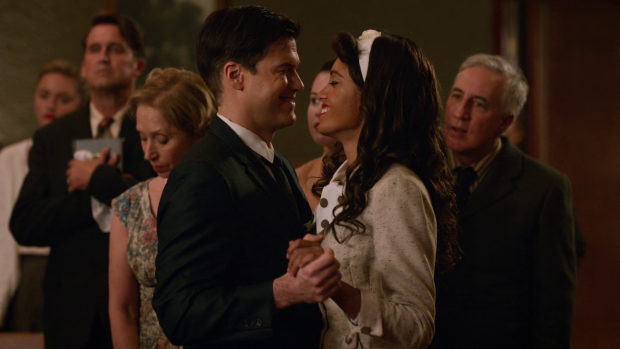 Nate and Amaya have their musical moment

A solid episode that suffers somewhat from a lack of reasonable jeopardy but makes up for it in character drama. Using Elvis as a historical figure probably wasn’t necessary since very little of what he did was identifiable as Elvis Presley though there is some appeal to seeing the man before he became the legend. As a vehicle for Nate and Amaya learning more about each other as a couple and trying to find some common ground together it works really well but there’s a significant loss of momentum when the overall plot fails to go anywhere. There is no tension associated with them getting locked up nor does it feel like there is any real threat at play.

Wally adapting to being on the team works well and teaming him up with Zari who has recent experience of being new is an inspired choice. She gives him important advice about how the team operate and he takes this to heart shown by him demonstrating a different attitude by the end of the episode. Wally continues to be a good addition to the cast and works well within this dynamic. Mick receives slight depth in this episode when he laments further changes on the ship suggesting that he doesn’t deal with loss well and would rather keep to himself. The funeral for the rat may seem ridiculous and it definitely is but on another level it shows how deep the bond within the team is when Ray proves that they support one another. It’s a sweet scene that has plenty of laughs.