DC’s Legends of Tomorrow returns for a third season and confronts the characters with the prospect of dealing with broken time.

It’s always frustrating when a great cliffhanger has a really underwhelming conclusion. A corrupted version of Los Angeles where unexpected structures like Pyramids can be found right next to skyscrapers and Dinosaurs roam the streets was a great image filled with limitless possibilities. At least an entire season of stories could be built on exploring this mishmash of history and the unique premise of the show means it could all happen in the blink of an eye without affecting the other shows in this universe. 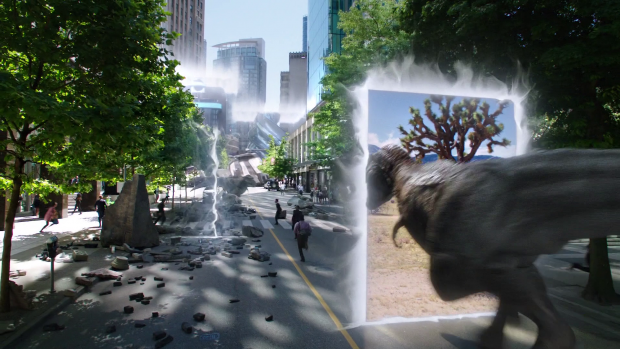 Cleaning up the timeline

Unfortunately the cliffhanger is resolved in the first 5 minutes by the appearance of Rip Hunter who has spent the last 5 years –from his perspective- building an organisation of Time Agents known as the Time Bureau. Based on first appearances they are essentially the Men in Black of time which is a decent idea as it creates an easy excuse for Rip to maintain a presence in the show without feeling like a spare part on the Waverider now that Sara is the Captain. It also allows him to create his own version of the Time Masters and handle things the right way; at least according to him.

What doesn’t work about this is that it undoes the poignant scene from last season where he officially turns over the Waverider to Sara and gives her his blessing to continue doing what she has been doing. Granted 5 years –from his perspective- is a long time but the shift in the character is jarring and somewhat unearned because it feels like he has been rewritten to suit the needs of the plot.

What happens next is really amusing as we are shown what happens to the characters after the Waverider is compromised. Jax and Martin simply go home with the most striking change being that Lily is pregnant. I suspect the father of the child will turn out to be someone we know and I’ll start the rumour that it’s Jax.

Sara finds herself working in retail and using every ounce of her willpower not to slit the throat of her difficult boss. It works because it’s the last place you’d expect Sara to end up and says a lot about how much she has learned about patience in her time as a Captain. 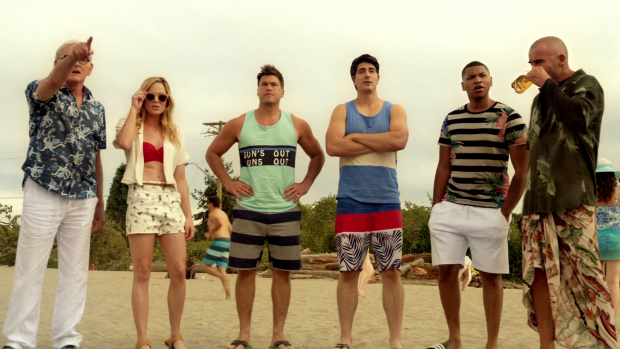 The band back together

Ray is in a similarly demeaning position working in Silicon Valley under someone younger than him who considers a dating app the highest of priorities despite Ray talking about his shrinking tech. It’s played for comedic effect though it raises some interesting questions. It is mentioned that Sara was hired despite being legally dead on two separate occasions so it’s clear that the records of the characters are intact. By that logic then shouldn’t Ray also still be legally dead? Even if not then it will be well documented that he was a billionaire genius with his own company so being an unappreciated employee somewhere in Silicon Valley is somewhat head scratching. DC’s Legends of Tomorrow has never been concerned with coherent plotting and for the most part this is fine but this ignores fundamental things about the characters.

Nate finds himself in Central City fighting criminals and generally being shown up by Wally aka Kid Flash who seems to get along well with him. This clearly isn’t enough for Nate but he makes do with what he can get. It’s curious that he wouldn’t simply go back to his old job but consistency has been abandoned.

Amaya only appears at the very end of the episode after dialogue explains that she went back to her home in 1942 after breaking up with Nate. It’s a very clumsy explanation with no reasoning behind it so it just comes off as bizarre. I do find it interesting that her powers have increased to allow the summoned animal abilities to act without her actually doing anything though this could create some awkward cop outs in later episodes.

Mick is the one character who is where you’d expect him to be. He has resigned himself to a life of leisure which involves stealing and relaxing; his two favourite things outside of eating and drinking. He actually goes to Aruba and becomes the catalyst that gets the plot moving. He is confronted by a time displaced Julius Caesar (Simon Merrells) who threatens to take over the world. Mick captures him and calls Sara for help on the situation and the plot moves forward. 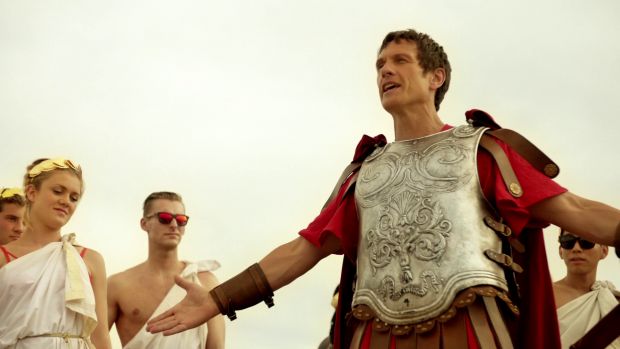 Simon Merrells is engaging enough as Caesar. He brings the right amount of gravitas to the role while also keeping a consistent level of silliness. He can be taken seriously enough to not be dismissed but his presence is still a comical one which blends into the winning tone set by this show last season. As a threat he is somewhat limp as he doesn’t really do anything other than try to rally an Aruba Toga party to his cause and steal Nate’s book on the Rise of Rome. This does allow him to take over the world but we don’t actually see him do anything so it’s somewhat underwhelming.

He does allow for some really cool action sequences such as Sara fighting him on the beach and swinging on a chain over multiple shields. Basically everything impressive this week in terms of the action is because of Sara which is great because it shows that the production team know what a great resource Caity Lotz is.

Rip doesn’t completely write off the team. He describes their methods as being like performing brain surgery with a chainsaw which is a fair description of the approach the team have taken since his departure. The counter given is that sometimes they screw things up for the better and it’s decided that this will be their new motto. Again, this is in keeping with what has been set up on the show. Rip ultimately lets them continue on because he recognises that their methods are effective on occasion and there will come a time when they are needed. The Time Bureau seem to alternate between being ruthlessly efficient and comically useless so I suspect this trend will continue throughout the rest of the season. I did like seeing Time Bureau training that made fun of the team’s solutions to their earlier missions.

One thing this episode fails to do is establish any kind of threat level. The team have an easy time stealing the Waverider from Rip and his people so the Time Bureau are something of a joke at this point and outside of a vague reference to someone called Mallus there is nothing to establish what the Legends will actually be doing for the rest of the season other than meandering around time making a mess of things. 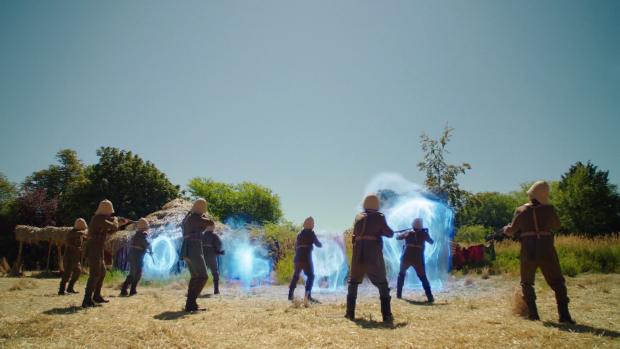 Amaya’s powers get an upgrade

An entertaining opening to the season that has some fun with the characters, introduces an interesting new role for Rip and reaffirms the status quo established last season. Seeing Sara, Rip and Nate exiled to a mundane existence worked well from a comedic point of view Julius Caesar was a fun enough villain though didn’t really do that much in the grand scheme of things.

The episode had some issues such as failing to establish any kind of threat level or deliver any clues as to what the team will be doing over the course of the season. An underwhelming resolution to the cliffhanger from last season was a source of disappointment as well. The show remains fun and light hearted though which is definitely to its credit.