“Beebo the God of War”

DC’s Legends of Tomorrow takes the team to England to battle toy worshipping Vikings as they deal with the recent loss of a team member.

You might be forgiven for expecting this episode to be more on the glum side considering the recent loss of Martin Stein. As I said during my crossover reviews it’s a death that resonates across the entire Arrowverse though it is something that has to be dealt with on a more personal level by the characters in this show. 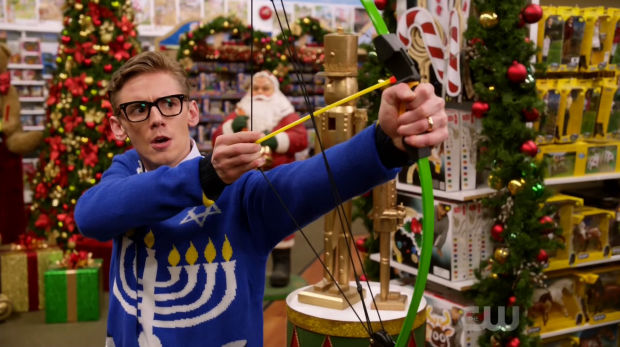 Each of the characters is shown processing the loss in their own way as Leo Snart acts as the team’s resident grief counsellor complete with a concerningly accurate Martin Stein puppet. The therapy montage has a light touch but also allows for rapid movement through all of the characters and their approach to grief. As expected Mick’s reaction is the most amusing with him beating on the puppet because he doesn’t like them in general. It’s definitely very Mick and caps off the sequence nicely.

In keeping with the missions involving members of the team in some way the anachronism begins with a time displaced young Martin Stein. On a show featuring time travel it’s important to deal with the possibility of using that ability to prevent Martin’s death and this show thankfully doesn’t make the audience wait for the answer to that question. The long and short of it is that saving Martin is too dangerous for the timeline as a whole so his sacrifice deserves to be honoured. It’s a reasonable explanation and allows the death to resonate with dignity.

The presence of the younger Martin allows the character to have something of a last hurrah even if he is played by a different actor. Graeme McComb’s performance is pitch perfect as a younger version of the recently deceased character and his inclusion allows the character to exit the series on a more positive note without doing a disservice to the weight of his passing. 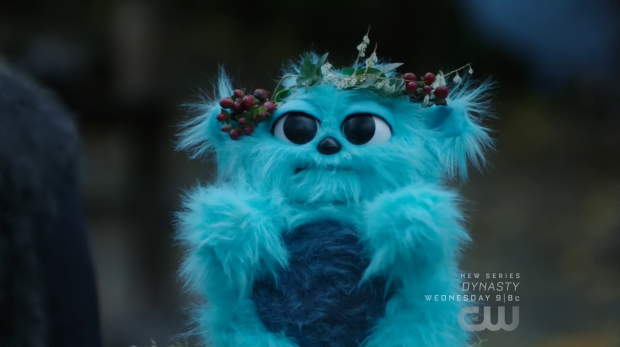 Jax is the character who struggles the most accepting this loss which makes sense considering their psychic connection. He blames himself for not being strong enough to hang in there long enough for someone to figure out how to save him and constantly tortures himself over it throughout the episode. His desire to change history to prevent the death is overturned by everyone except Zari who encourages Jax to find a loophole just as she did with Helen of Troy which leads him to take inspiration from Back to the Future and pass him a note that shouldn’t be opened until the day of his death.

Martin ends up burning the note as he doesn’t want to mess with the future but at least Jax tried and can take some form of comfort from that. He also hears directly from Martin how grateful he is for the knowledge that he will live to the age of 67, have adventures and forge meaningful friendships so he is content to accept his fate with dignity. Just as the present day version made peace with the fact that his time is up the past version sees the coming years as something to look forward to even if they end with his death on a very particular date.

The fact that Martin finds out the date of his death though the instruction on the letter adds some colour to the events of the crossover as is can now be read as him realising what it is he has to do and what his sacrifice ultimately means. This will make a fantastic exit even better on my inevitable rewatches of the event. 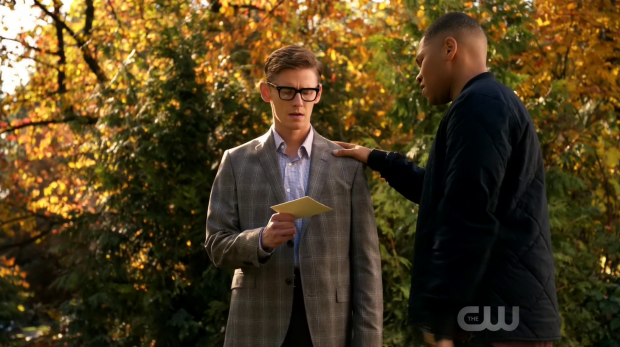 Professor! I have to tell you about the Future!

On its own Martin being sent into the past isn’t what causes the anachronism. With him was a small Furby like children’s toy named Beebo that ends up being worshipped by the Vikings as a God. It’s handful of phrases such as a declaration of hunger are interpreted as a desire for War by the Vikings who ultimately take this very seriously. It’s the sort of thing that can only work on an episode of DC’s Legends of Tomorrow -or maybe Supernatural– and it is mined for every drop of comedy possible.

At first the situation itself doesn’t seem all that dangerous but repeated mention of the consequence that ripple throughout time adding to the urgency of the mission. Changes include North America being known as New Valhalla and Christmas becoming Beebo Day. Naturally all of this needs to be fixed or the other Arrowverse shows outside of Supergirl will change significantly so Sara gets to work leading the team to fix the problem.

Sara is a capable leader so understands that the team are heavily distracted by their grief at this point so asks for the help of Agent Sharpe in this instance. She needs the assistance of someone clear headed and impartial in case any of the team are emotionally compromised. Agent Sharpe makes for a welcome addition as she has such great chemistry with Sara and has been previously established as a match for her in combat.

I was wrong in my prediction that Sara and Agent Sharpe would have hooked up before now but that day is coming judging by their constant flirtatious banter in this episode and the mention of her not being into husbands. The unresolved sexual tension and comparable skill levels define their relationship at this point so it’ll be interesting to see what replaces that when the trigger is inevitably pulled on a physical connection between them. For now the dynamic is constantly watchable and this episode solidifies Agent Sharpe as an ally of the Legends in the future. 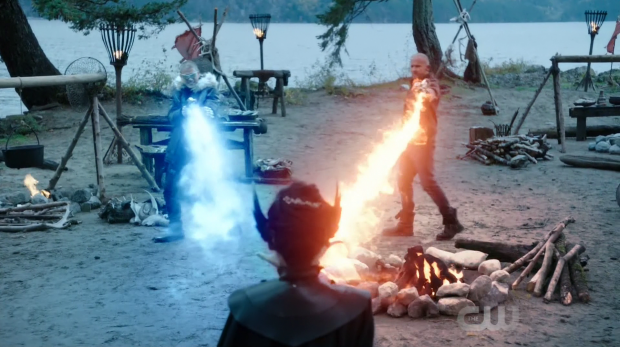 It appears that there is a certain formula being followed by the episodes at this point. Early in the season a problem would play out and the Time Bureau would eventually enter the story to add further complications; this has changed to a problem being dealt with until Damien Darhk shows up to add to the problem. It runs the risk of being repetitive though hasn’t reached that point quite yet thanks to the creativity of the writers and the infinite charisma of Neil McDonough chewing the scenery with aplomb.

His contribution to this episode was nothing short of excellent. The tacky Odin costume and wig was a stroke of genius and blends into the off the wall tone perfectly. I loved the way he casually settled into a position of worship and rattles off his usual barrage of great one liners.

The conclusion to Darhk’s short stint as a Norse God was creatively done. Playing out the possible scenarios ahead of the real thing with different conclusions based on certain factors was a nice touch and the fact that Darhk’s one liner could be predicted so precisely was great. Of course the conflict plays out different to predicted though at least Sara’s death is prevented so that’s definitely a victory. The death of Nora Darhk was unfortunately a complete anticlimax considering how much potential this character had.

I also really liked the resolution to the Beebo worship involving Ray shrinking and flying around inside Beebo telling the Vikings about Christianity, science, evolution and global warming. I’m not sure how it works to destroy their faith in Beebo but it’s a great moment all the same. 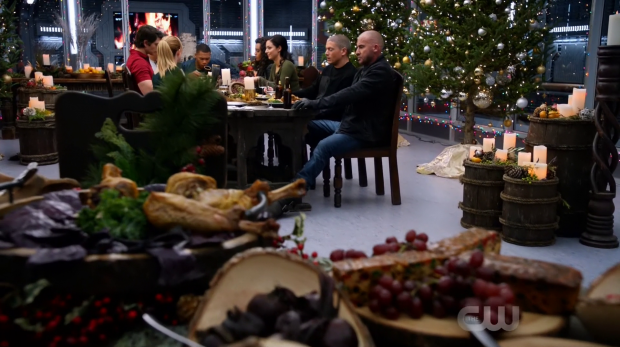 Sara being sucked into whatever Mallus’ realm is was equal parts intriguing and pointless. It allows Mallus to issue vague threats about what would happen upon his release and continues to remind the audience that there is a threat building in the background but it adds very little to the episode overall.

Jax leaving the Waverider -hopefully temporarily- makes sense for him as a character at this point. He needs time to process his grief and spending time on the ship that reminds him of Martin will make that difficult. I’m hopeful that he won’t be gone more than a couple of episodes or maybe even gets his own story independent of the other characters as Jax has never been more engaging than in this season. The Christmas party scene was nicely done and really cements how close knit the Legends team have become.

Leo Snart being on the Waverider is very enjoyable as it means the welcome return of Wentworth Miller even if the character he is playing is different. Most of his screen time is spent with Mick to explore their dynamic. Mick clearly finds Leo’s presence distressing as he is a reminder of the friend that he lost; he also doesn’t appreciate the fact that Leo is constantly getting on his case about drinking too much. This plays out across the episode before being resolved with the revelation that Mick isn’t the same man that Leo knew and it’s not fair to try to force him to become that. The realisation comes after they make an effective team and it allows their partnership to progress.

The end of the episode showing John Constantine standing aboard the Waverider asking Sara for help was a great cliffhanger ending that we will unfortunately have to wait until February to see resolved. I’m very much looking forward to more John Constantine in the Arrowverse. 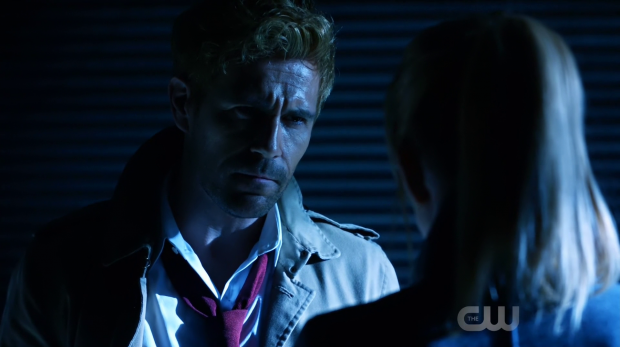 Something to look forward to

Another strong outing that deals with the death of Martin Stein in a really moving way without becoming too morbid. Using the young Martin as a stand-in was a good idea as it allowed the characters to interact with him one last time and made the character’s exit a happier one without robbing his death of its power. Jax has the most trouble dealing with it but is able to find some closure by at least attempting to warn the younger Martin who decides to accept his death gracefully much like the present day version did. Jax ultimately has to leave to process his grief which makes sense but the connection between the two characters is well represented.

Sara and Agent Sharpe’s team-up in this episode is great. There is an obvious attraction between them and their shared skill set makes them a formidable force together. This episode solidifies Agent Sharpe as a defined ally for the team in upcoming episodes. Having the anachronism start out as a group of Vikings worshipping a Furby like toy is ludicrous yet excellently done in a way that only this show could get way with. The arrival of Damien Darhk in his Odin costume adds to the wonderful lunacy and is resolved in a really creative way though is let down by the unceremonious death of Nora Darhk. Leo Snart’s presence on the team is also nicely done with a well executed bonding arc between Leo and Mick involving Leo realising that he shouldn’t try to change Mick. Unfortunately we have to wait until February for more but at least the long wait will bring us John Constantine.

If you want to chat to me directly then I’m on Twitter as well. Join me back here in February for more DC’s Legends of Tomorrow reviews