DC’s Legends of Tomorrow takes a trip to the year 3000 before heading to Camelot in their quest to find pieces of the Spear of Destiny before the Legion of Doom do.

Nobody is going to deny that this show is really silly. Considering it’s a show about time travelling superheroes then I’m inclined to say that it’s supposed to be and episodes like this prove that the silliness can be really endearing while also making for something of a flawed experience. 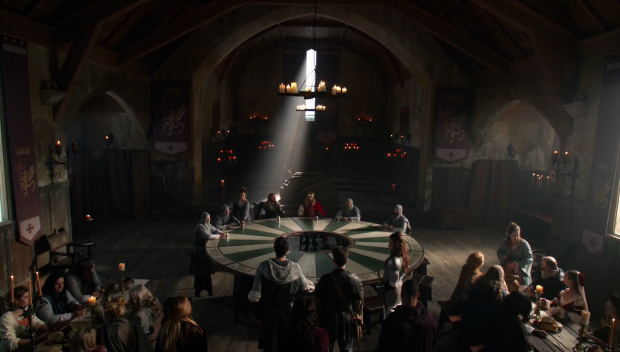 The legends are true…sort of

I’ll get to the flaws in a while but I’d like to start with what I loved about the episode. Season 1 of this show was really messy as the show didn’t know what it wanted to be but this season seems to be the complete opposite. There’s a confidence in the writing that shows the writers have settled on the sort of show they want to make. Whether you can get behind rampant historical inaccuracy and general silliness will be down to personal taste but this show has found itself and that’s worth remarking on.

To me this show is an adventure series with all of time as its playground and the writers really enjoy having fun with the different time periods. In this case going back to the time of King Arthur is a good way to play around with history as well as legend since that time period is more known by the inaccurate portrayals.

The episode gets around that in a really clever way with the quick backstory of Rip Hunter recruiting the Justice Society to take fragments of the Spear and hide them in different time periods. Dr. Mid-Nite is briefly seen in the year 3000 with his piece and Stargirl is hiding in 6th Century Britain with hers. To help protect it she created the mythical Camelot with all the trimmings including the Knights of the Round Table and she passes herself off as the wizard Merlin. It’s easy for her to do since her staff seems magical to those around her. It’s a bit of a cheat but a clever way for the show to play around with Arthurian Legend while acknowledging that it didn’t actually happen that way.

Unfortunately that was about as interesting as Stargirl got. There was an attempt to draw parallels between her and Amaya as they are both members of the JSA who got too close to the mission and became intimately involved with someone. Amaya fell for Rex Tyler and fooled around with Nate despite her own boundaries and Stargirl fell in love with King Arthur (Nils Hognestad) meaning she has to stay because she’s unwilling to give up the life she has built for herself. This connection between Amaya and Stargirl is very superficial and the implied history between the two of them doesn’t come across as strongly as the episode clearly assumes it does. Stargirl’s relationship with King Arthur is also really underdeveloped to the point that it may as well have been left out entirely. It also doesn’t help that Sarah Grey’s performance is uniformly wooden. 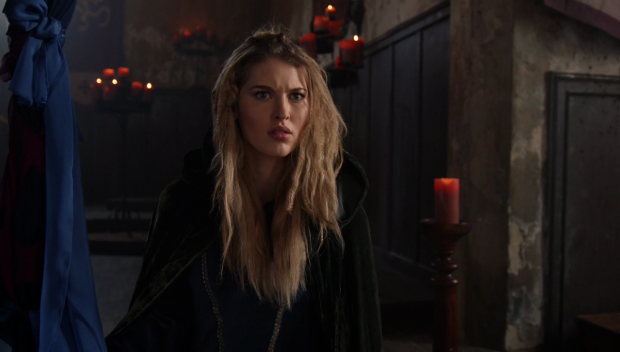 Merlin isn’t what anyone expected…

This is a big episode for Ray who is a complete nerd for Arthurian Legend and is excited to be a part of the time period while Nate keeps cautioning him on being too caught up in things. This is a good dynamic as there is a clear contrast between the facts and the fiction with Nate and Ray’s different approaches to it. There’s a comedic element to it as Ray is giddy with excitement while Nate seems to be trying to ruin his fun. He does so out of concern since Ray looks a lot like a drawing in a book depicting a tragic death.

As much as I enjoyed Ray fully immersing himself in the romanticism of the time period there were certain aspects of it that didn’t work for me. It has been well established that Ray’s combat skills leave a lot to be desired without his suit so seeing him conduct himself so well in battle in this episode was a little confusing. Especially when he held his own against Damien Darhk for far longer than he should have. Damien Darhk is a former member of the League of Assassins so the only person who should be able to best him in combat is Sara considering the skill level. Ray should have been killed by him very quickly.

Despite that it was a lot of fun seeing him use his tech to create a sabre made of light and suit up to take on the Legion of Doom’s mind controlled forces. The time period was also represented very well with impressive looking costumes and sets as well as a battle sequence on a muddy field that was really well directed. The episode looks a lot more expensive than it probably was and allowed for a good number of impressive moments.

As impressive as the action was, the threat level wasn’t massive overall. Other than their numbers it didn’t feel like the team were in any real danger even with Damien Darhk and Rip Hunter leading them. It’s a shame because there was a real opportunity to make it seem like Ray’s life was at stake but the episode never established that he might not make it out alive. 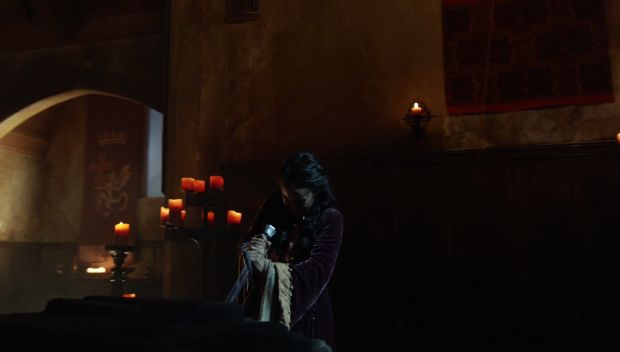 Amaya is the chosen one

Sara has a lot to do in this episode such as flirting with Guinevere (Elyse Levesque) which seems like a common thing for her to do at the moment. I mentioned on a previous podcast that she has become like Captain James T. Kirk since becoming Captain of the Waverider part of her role has been seducing women in different time periods in the same way Kirk would seduce women on different planets. They aren’t deep emotional connections that are well developed but there’s no way they can be given how long episodes are and the ensemble nature of the cast. For the purposes of an episode having a connection bet little more than longing looks, flirtatious banter and maybe a kiss is good enough though I would like to see more done with Sara’s sexual orientation at some point as there are really good stories that could be told with it. Her flirtation with Guinevere was a lot of fun though and I like that Sara turns out to be the inspiration for Lancelot.

She is also tested as a Captain when she almost has to make a choice between abandoning a member of her team to benefit the overall mission or risking losing another piece of the Spear in a rescue attempt. Initially she seems all for leaving Ray behind because stopping the Legion of Doom is more important but the rest of the team are loyal to Ray and refuse to follow her orders. It should be an inspirational moment but it falls a little flat considering how quickly Sara changes her mind. Amaya’s behaviour was the most confusing thing here as she flips from believing that the mission takes priority to deciding that Ray is more important far too suddenly for it to be believable. It hardly felt like Sara was making a hard choice considering how easily she caved into the resistance to her orders.

Despite that, it’s good to see that Sara is able to make tough decisions and live with the consequences. Her leadership qualities have been clearly shown throughout the season so I hope that someday she actually has to make a tough choice that results in a loss for the team as it will give the story weight and prove how effective a leader she is. For now the willingness is there but the writing so far hasn’t allowed her to prove the point.

The Legion of Doom were represented by Damien Darhk and Rip this week and it was as fun as it usually is. It goes without saying how charismatic and villanous Neil McDonough is in this role and this was definitely another example of that. On a purely superficial level it was great to see him dressed as a Knight and chewing the Camelot scenery. 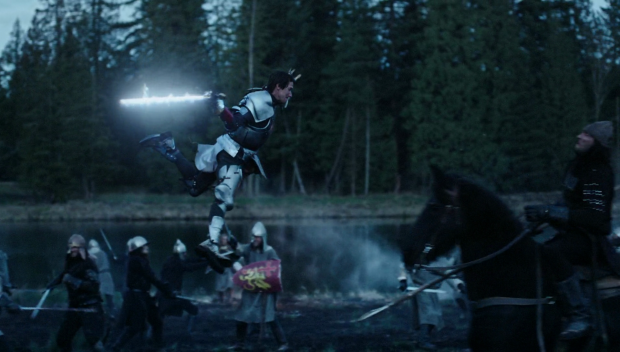 The force is strong with Ray

Arthur Darvill continues to impress as evil Rip. He is still recognisably the same character but a darker version of it that makes him even more sinister. His knowledge of the team and their weaknesses makes him a really significant threat and there’s something really suave about how casually sadistic he is. This episode wasn’t a great example of his villainous capabilities as he spent much of it mind controlling an army but the end of the episode where he talks to Gideon hits at how dangerous his knowledge of the team could be.

An entertaining episode that plays around with the fact and fiction of Arthurian Legend in a really clever way. The inclusion of Stargirl to make this work was a great idea though her role in the episode didn’t quite work as her love for King Arthur wasn’t well developed and Sarah Grey’s performance wasn’t able to sell it. Ray nerding out of Arthurian Legend was a nice touch especially with Nate there to counter it with the facts and call him out on him not taking the threat to his life seriously enough. Ultimately the threat level didn’t feel significant but it was still a good showcase for Ray.

Sara had a lot to do from flirting with Guinevere to making tough decisions as Captain. Neither of these were especially well developed but the fact that Sara is willing to make tough choices is interesting even if it doesn’t come to anything in this episode. Damien Darhk was good value as usual and I continue to be impressed by Evil Rip who will definitely be using his knowledge of the Waverider to cause problems for the team.