“Fellowship of the Spear”

DC’s Legends of Tomorrow heads to World War I to recruit J.R.R. Tolkien (Jack Turner) to help them destroy the Spear of Destiny before it falls into the hands of the Legion of Doom.

Everything about that summary seems completely ridiculous yet it is swiftly becoming the norm for this show. It seems that the producers of DC’s Legends of Tomorrow have adopted a “go big or go home” approach to the storytelling and it definitely works. So far they’ve done a really good job of building up the villains, developing the ongoing Spear of Destiny arc and enhancing the character dynamics within the core team in really interesting ways. 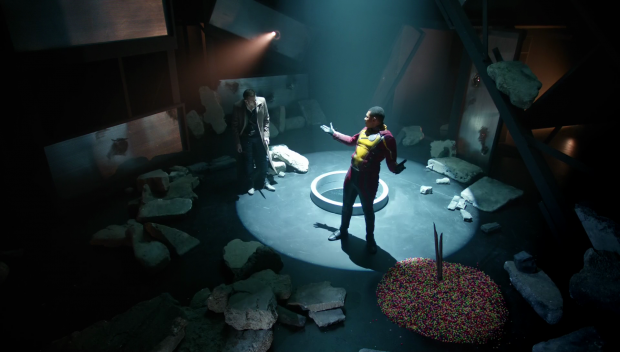 There’s a lot of forward plot movement in this episode and my main criticism is that the movement is a little quick in places. This is most evident when the Legends head to the remains of the Vanishing Point to steal the other pieces of the Spear from under the nose of Eobard Thawne. It feels like a really easy heist and Thawne appears woefully underprepared for this despite how much of a genius he is supposed to be.

This sequence wasn’t without merit though as we got to see Firestorm using the rarely seen Transmutation ability to turn the vault housing the pieces of the Spear into Jelly Beans. I suspect this power isn’t used often because it could solve so many plot problems on its own which is a problem in itself but it’s good to see it used in such a fun way.

The highlight of the episode was Mick’s emotional journey. He’s having trouble resolving his feelings about the team because he has picked up on the fact that they haven’t ever really managed to trust him. He has shown them loyalty all season but has been routinely dismissed as the resident madman sent in when a blunt instrument is needed to solve a problem. It’s interesting that Mick has forged friendships with each member of the team in his own way but none of them -with the exception of Amaya- have bothered to make the same effort with him. That’s something that has been noticed and it is causing him to question his loyalties. The lingering question in his mind is why should he bother sticking his neck out for them when they wouldn’t do the same for him? 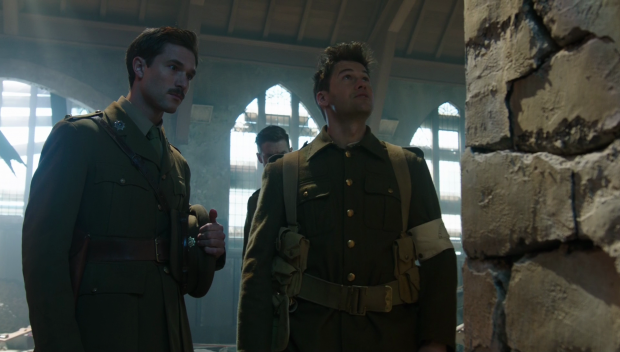 Mick’s relationship with each member of the team is well developed and shown in different ways. He respects Sara’s authority and will listen to her orders because he knows that she will be able to enforce them, Martin is someone he can confide in about his psychological issues, he sees Ray as a potential partner for him, Jax is almost a little brother to him though that isn’t well developed, Nate is someone he enjoys bantering with and Amaya he sees as a friend who can be learned from while learning from him. Mick may have rarely been the focus of an episode but these interactions were always developing in the background and it feeds into his arc in this episode.

Snart’s arrival when the team travel back to World War I really messes him up. His initial assumption is that he’s hallucinating again which makes sense since Snart is dead as far as he’s concerned. It’s enough for him to lower his guard to the point that he reveals their plan to him. This turns out to be a very bad idea since it is actually a living Snart and gives the Legion all the information they need to act against the team.

Naturally the team don’t take this very well and basically gang up on him with the collective assumption that he will betray them given half the chance. Dominic Purcell’s facial expressions tell everything that needs to be told about how undervalued Mick feels at that moment and it definitely makes him question why he should bother being loyal to a team that don’t trust him. He made a huge mistake but the circumstances are understandable.

This pays off when Snart invites him to join the Legion and reaffirm their partnership which he accepts without hesitation. I imagine this will end with some kind of redemption for him but having Mick on the Legion of Doom really dials up their threat level and shows that Mick still has a lot of growing to do before putting his villainous tendencies behind him. In this case reverting to his old self makes the most sense for him because he gets to reunite with his partner and gives him the opportunity to literally build a better world for him. 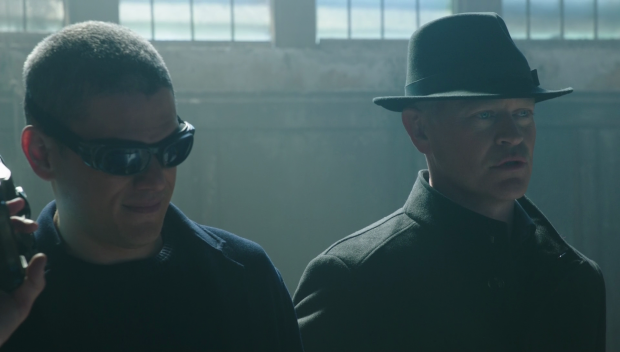 Having Snart back is a blast. Nobody chews scenery like Wentworth Miller and while it feels like a massive step back to undo all the growth Snart experienced last season it works really well as fuel for Mick’s internal conflict as well as having a version of Captain Cold that can really dial up the bad. He fits right into the theatrical villainy of the rest of the Legion and it’s a blast to watch them work together.

Amaya also has a compelling role to play in this episode. Learning about the destruction of her village has deeply affected her and it’s something that others are picking up on. Sara shows her leadership skills by addressing this and helping her to deal with it. Using the devastation of World War I as a trigger for Amaya was a great idea because it is very similar to what she imagines the destruction of her village looks like and it hits her on a deeply personal level.

Sara doesn’t really try to dismiss the sense of loss that Amaya feels about the event that hasn’t happen yet but she does offer reassurance by pointing out that her granddaughter becomes a hero. This feels like a small comfort but it’s the best Sara can do considering how pragmatic she is about the course of history.

Amaya and Mick seem to have the most to gain by using the Spear to rewrite reality because they both want things about their lives to change. It makes sense that the Spear would call to them in particular and it comes across that it’s a difficult temptation to turn away from. The most interesting thing is that both of them are able to resist until Mick gives in to Snart’s influence. 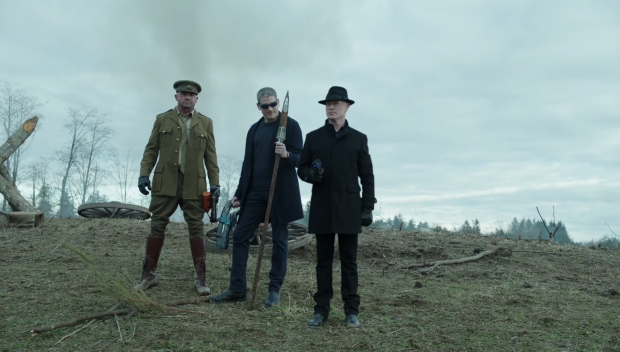 When Mick offers to let Amaya come with him when he sides with the Legion I almost expected her to go with him purely because of how conflicted she currently is but I’m also glad that she didn’t. The hesitation was enough as it still preserved Amaya’s base desire to do good while adding depth by showing that she was tempted by Mick’s offer.

The mission involving a trip to World War I and recruiting J.R.R. Tolkien was great fun. Jack Turner was great in the role and there were plenty of Lord of the Rings references as you might expect. I especially liked the writing on the side of the Spear revealed by flames and Tolkien being referred to as “Fool of a Tolkien” was hilarious. Even the structure of the episode was enough to inspire Tolkien’s later work since it was a group of people taking a cursed object across a wasteland while all being tempted by its influence. It’s fairly on the nose to have time travel inspire people to do the things they’re famous for but when it’s this fun I have few objections.

Tolkien was a good character beyond the references. Recruiting him when he was a soldier but focusing on his work as a historian was a great way to use him and allowed for some really watchable interactions with Nate as well as plenty of discussion about historical facts that made for fascinating viewing.

The World War I setting was really well used with a really impressive level of devastation that successfully conveyed the horrors of that conflict without being too grim or brutal in its depiction. It looked bad enough but wasn’t overly gory so struck a nice balance. Rip’s speech to both sides imploring them to agree to a cease fire to save the lives of the injured was really moving and beautifully delivered by Arthur Darvill. Heartfelt moments like this are what makes this show something that can be taken seriously enough to invest in the gravity of the situations the characters find themselves in. Next week we see reality according to the Legion of Doom and I really can’t wait. 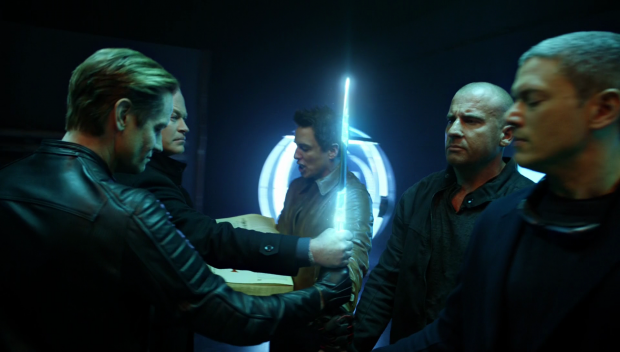 The Legion of Doom reshapes reality

Another excellent episode that redeems itself from a clunky heist sequence early on and delivers some really compelling character moments. Mick doubting his loyalty to the team and being tempted by both the Spear and Snart is a great arc for him and his betrayal of the team makes complete sense considering they clearly don’t trust him and push him away with their accusations. Having Snart back is no bad thing as well as Wentworth Miller chews the scenery like nobody else so is a welcome addition to the Legion of Doom. Amaya struggling to deal with the inevitable destruction of her village is great as well. Sara’s reassurance that her granddaughter grows up to be a hero offers some comfort but not quite enough and the backdrop of World War I only reminds Amaya of what she is destined to experience. I almost thought she would go with Mick when offered but I’m glad she didn’t as the hesitation was enough.

The overall mission where the Legends worked with J.R.R. Tolkien was a lot of fun. References to Lord of the Rings worked well with the story and Tolkien had some meaningful interactions with Nate along with his role as a historian being really well used. The World War I setting was really effective and showed the devastation without being too brutal or gory. Rip’s speech imploring both sides to call a temporary cease fire was really moving as well. DC’s Legends of Tomorrow is firing on all cylinders at the moment and I can’t wait to see what reality according to the Legion of Doom looks like.