DC’s Legends of Tomorrow heads back to 1870 on a mission to prove the team’s worth by dealing with an anachronism at P.T. Barnum‘s (Billy Zane) Circus.

The anachronism in question is a caged Sabre-toothed Tiger brought out to perform for eager crowds. Last week suggested that the broken time plot had been largely resolved but there is a lot of clean-up work to be done before the timeline is repaired which gives the writers carte blanche to combine whatever items they can find in the historical toolbox in whatever way they want. The only limit is the imagination…and the CGI budget. 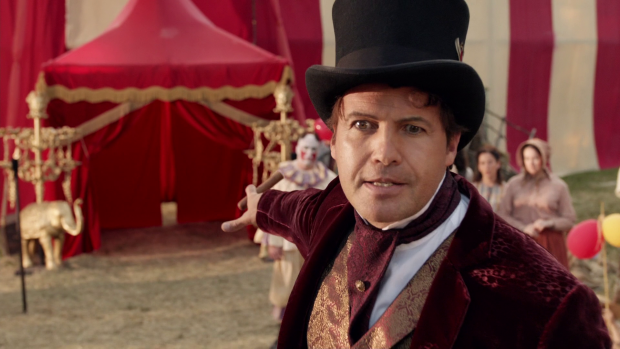 Sara elects for the 1870 mission because it has a low threat level according to the Time Bureau’s assessment so will be a quick win to prove that the Legends are capable of competently sorting out problems. Of course the opposite happens otherwise there would be no story.

One thing this episode proves is that Rip has a point when he says that the Legends cause more problems than they solve a lot of the time. A relatively simple mission involving shrinking a Sabre-toothed Tiger, bringing it back to the ship and returning it to its own time results in the animal growing to giant size before escaping, a good chunk of the team being forcibly inducted into the Circus and a very public sighting of the Waverider. To call that a successful mission is stretching the truth to breaking point.

The constant failures followed by the scrambling to fix that failure is part of the charm of this show. Flawed characters are always more interesting than flawless characters and the Legends team consists of a group of well meaning screw-ups. Each of them are experts in their own particular field except from Nate who seems to have all but ceased being an historian but somehow they manage to make a colossal mess of everything they touch. 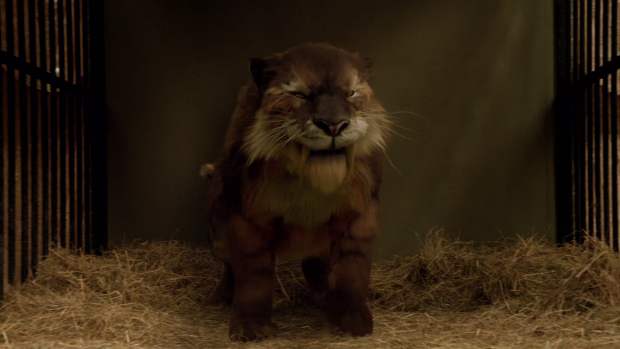 As with every episode the writers have an uphill battle when it comes to establishing anything that goes on as any way meaningful. It is all just throwaway silliness or is there something more to take away from this? To my mind most of the episodes manage to inject just the right amount of pathos to ensure that I don’t feel that my time has been wasted.

The emotional journeys this week belong to Amaya and Nate in a plot that provides answers for their off screen break-up. It may not be answers that make a lot of sense but they are answers nonetheless. It turns out that Amaya was thrown by seeing Mari McCabe fighting criminals on the news and was suddenly reminded of everything she chose to abandon to live a life with Nate. Her granddaughter is out there doing important work protecting her city and Amaya has to travel back to 1942 to ensure that she’s born. With that in mind she leaves Nate, goes to Mari do her thing for a while then has Rip take her back to 1942. Sadly this all happens off screen which is a bit of a missed opportunity as I would like to see Mari again.

Her decision seems reasonable but the way she goes about it isn’t. Leaving Nate without an explanation on his birthday no less is a really crappy thing to do no matter the reason and he has every right to be angry with her for doing this. Not to mention the fact that he’s deeply hurt that she didn’t say goodbye. She owed him more than that and she has been established as someone who is better than that. Besides, how do we know that Nate isn’t Amaya’s grandfather? Anything’s possible when it comes to time travel.

Nate’s reaction is about what you would expect considering Amaya comes rushing back into his life. He is so overwhelmed by emotion but focuses on resenting her before getting blackout drunk and eventually confronting her about what happened. It takes a while but they eventually find some common ground and go back to bickering with one another. By the end of the episode Nate is one of the voices refusing to let her leave so it’s clear that he understands her decision even if he doesn’t agree with it. 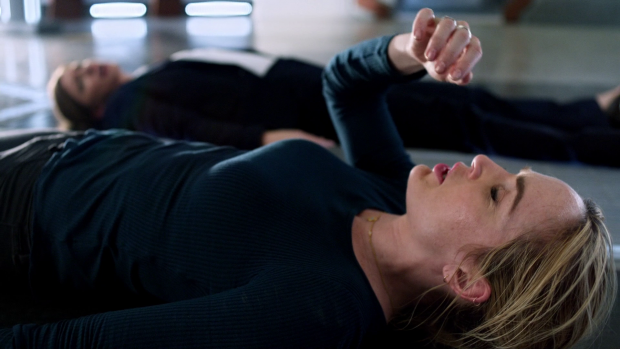 Amaya has other problems. Her powers have been amplified to the point where she can no longer control them and any use of her totem results in a complete loss of control. The event we saw at the end of the previous episode was definitive a it resulted in her mercilessly hunting down and killing the young soldiers who wandered into Zambesi. This haunts her as she can’t believe that she would be so unhinged. The show has touched on emotional control being very important when using her totem and we finally get a demonstration of what can happen without that self discipline.

When she goes berserk in Bear Mode towards the end of the episode Nate is the one to talk her down and remind her of who she is. It works and may offer a solution to the problem. It’s possible that the lack of closure to her relationship with Nate is the catalyst for what is happening to her though it hasn’t been explained and the problem is far from solved. So far this is a great arc for Amaya and I’m reminded of how badly missed she was last week.

Many of the characters don’t have much development though remain active parts of the story. Ray, Martin and Jax circle the Circus plot in various ways but are more fodder for the story than anything else. As always it’s fun to learn random nerdy facts about Ray. It turns out he can identify 175 types of dropping, is allergic to cats and is really bad at returning library books which qualifies as living dangerously to him. Sadly Mick’s fear of clowns -I feel his pain- has him taking a back seat throughout much of the episode.

Sara is the one to deal with the Time Bureau represented by Gary (Adam Tsekhman) and Agent Sharpe (Jess Macallan). Using these characters is a different way of showing the range of competence in the organisation. Gary is the incompetent one who can easily be intimidated where Sharpe is incredibly capable. Her back and forth with Sara is great to watch and I love that they’re evenly matched in a fight which results in them agreeing to take a break rather than fight until someone wins. It’s a fun dynamic and I want to see more of it. My prediction is that they will hook up by the fourth episode as it definitely seems to be heading that way. 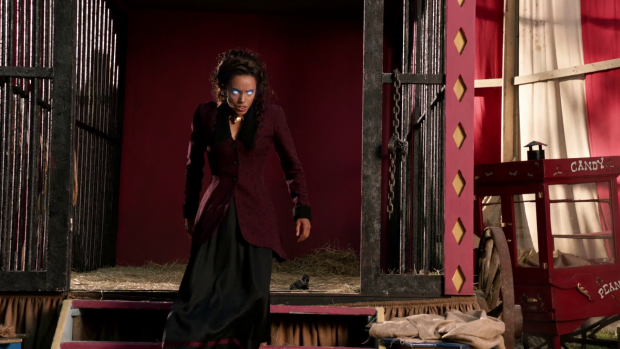 Barnum was a welcome departure from the standard villains this show has. Normally a mission to the past involves protecting the historical celebrity so it’s a refreshing change to see this flipped on its head. The same happened with Julius Caesar last week but this is a far better example. Billy Zane is an engaging presence and blends wonderfully into the tone of the show. He plays Barnum as over the top yet menacing and clearly takes great delight in chewing the scenery. Barnum’s motivation is simple and believable. Wanting to revive his failing Circus and going to extreme lengths to make sure that happens works well enough. It’s fairly typical but the execution is really entertaining so the simplistic motivation doesn’t matter. Extra points go to whoever made B’Wana Beast -or at least a nod to the character- a part of Barnum’s Circus.

Sadly the writers missed a trick afforded to them by the presence of Billy Zane. Victor Garber being in the cast presented an opportunity for the two Titanic actors to share a scene or two especially considering Martin’s line about the builder of the Titanic.

The visual of the size changing Sabre-toothed Tiger was really impressive. I could tell it was CGI but it was still very impressive. It felt like an urgent physical thread and was used economically throughout the episode.

I criticised the previous episode for making almost no attempt to establish what the stakes would be for the season. This episode fixes that by showing the audience a piece of what the Legends are up against when a minion of Mallus summoning a woman from the lake. The woman turns out to be Kuasa (Tracy Ifeachor) also known as Mari’s sister who appeared to be killed in the second season of Vixen. I like this so far as it puts Amaya against her granddaughter which has built in drama. Hopefully this will result in an appearance from Mari as well. 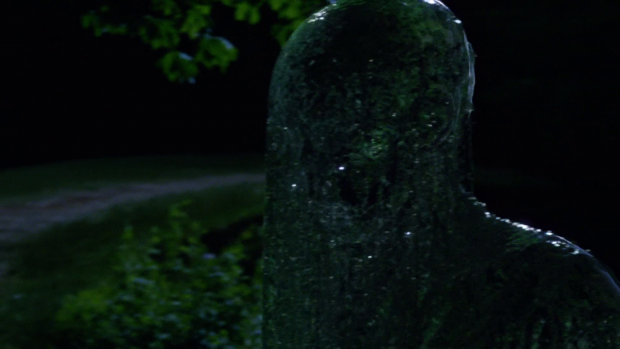 Another fun episode that delivers an engaging emotional story for Amaya. There are issues with it such as her flimsy justification for leaving Nate without an explanation but her uncontrolled powers potentially being connected to her emotional state creates a lot of potential for character development. Many of the other characters have their function within the plot but don’t do much which is fine as the dynamics are still intact and it’s impossible to develop everyone in every episode.

Sara and Agent Sharpe are great to watch together. They are evenly matched both in wits and in combat and there seems to be a lot of sexual tension between them that will no doubt pay off very soon. Using her to show the best of the Time Bureau and Gary to show the worst is a nice touch as well as it shows the variety of storytelling the organisation can be involved in. Billy Zane was a really engaging villain who was appropriately threatening and fit the tone of the show perfectly. I also liked the movement of the background threat and the potential that has to connect to Amaya.