DC’s Legends of Tomorrow heads back to 1930s Hollywood as the team track down an anachronism in the form of Helen of Troy herself.

Probably the best known historical fact about Helen of Troy is that she was considered unimaginably beautiful. The phrase “the face that launched a thousand ships” comes up a lot so adapting her is a tall order in terms of how that is visualised. This show decided to go with a more “traditional” image of beauty by casting a thin white blonde actress. It’s a choice and not a bad one as it gets the point across especially given the setting of 1930s Hollywood. She fits the Hollywood mold of that time though it might have been interesting to see beauty portrayed differently especially from an anachronistic point of view considering she throws men into a complete frenzy by her very presence. 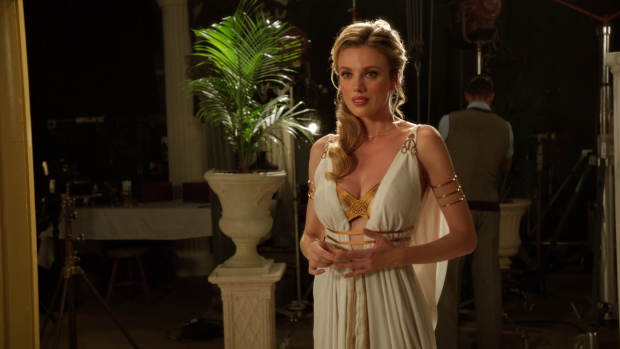 Helen of Troy in the flesh

Bar Paly does a really good job as Helen. Obviously she’s no slouch in the looks department but there’s an almost ethereal quality to her presence here that makes her effect on men very believable. There’s also plenty beneath the surface when the opportunity presents itself. Helen is characterised as being bold, assertive and more than a little fed up of the conditions she had to deal with in her own time.

Perversely she has to deal with similar problems in Hollywood. Because of her beauty she is desirable as a star and the studios literally go to War over her. It’s a shameful display and makes a natural connection between the competition fuelled studio system and the ancient Greek warring city states which poses the question of how much really changes across the years.

The way Helen is treated by the men she encounters is eerily topical especially considering the constant stream of scandals coming out of Hollywood in the news currently. What we see here is men driven to madness by the presence of a woman and acting out their baser instincts which is one interpretation of what is coming out in the news. I’m not here to offer opinions on large issues necessarily though I can acknowledge that this episode at least pays lip-service to it by showing that this sort of thing has always happened. 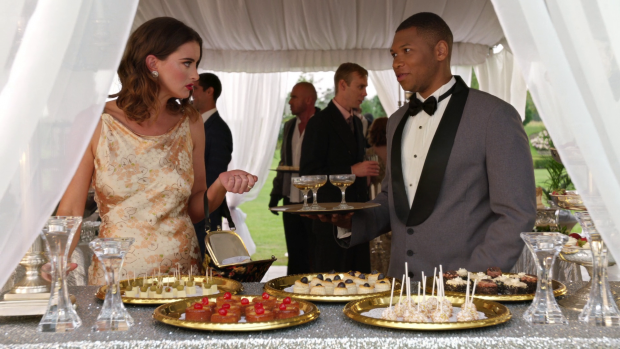 Martin gets to live out a boyhood fantasy

DC’s Legends of Tomorrow isn’t quite a female centric show though female characters are numerous and prominent which is unique in itself as female led superhero stories are still very rather though definitely growing in number. I wouldn’t say that this show has a particular female empowerment agenda but the female characters are just as capable as the men and often receive more of the focus. The best thing this show does is write them as characters without really considering their agenda.

This episode is something of an exception to that as Helen sees the female members of the team as an example of things getting better in the future. She sees that Sara is a Captain and is very impressed by that so meeting the Legends gives her hope for the future that seems so far away from her in her native time period.

Helen’s most meaningful relationship is with Zari probably because of their shared resentment of the time period they come from. They have some really well played interactions and Helen comes across as something of a tragic figure who feels trapped by her role in history. Zari sympathises with her because she was given an opportunity to change her destiny where Helen seems resigned to return to what history remembers of her. Zari’s compromise at the end by dropping her off in Themiscyra was a nice twist that fits Helen’s desire to live her life free of what men expect from her and expands the Arrowverse to the possibility of Wonder Woman in a really definitive way. 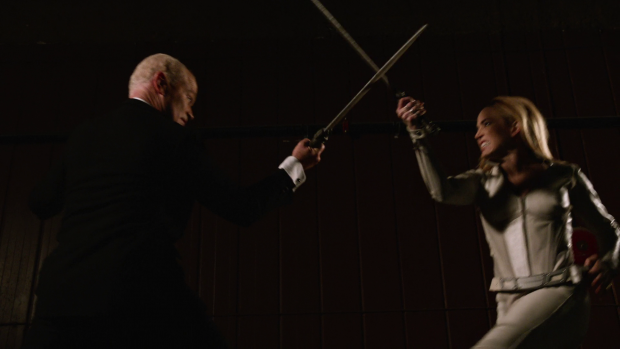 What we call came here to see

The appearance of Damien Darhk in this episode was as entertaining as always for all the usual reasons but I feel that he doesn’t represent that much of a threat any more. The Legends have taken him down before so there’s no reason that they shouldn’t be able to again though I feel that there is some kind of twist coming in regards to his daughter Eleanor. Nothing was done here to establish their relationship beyond the fact that they travel through time together inflicting Evil on whoever they encounter which is enough for now but some work will have to be done on their relationship. I could see Eleanor eventually deciding that she feels her father is holding her back and betraying him in some way. Perhaps it will be a desire for more power or have something to do with Malus.

This episode does make good use of Sara and Damien’s feud by having them attempt to negotiate. Shared hatred puts them on something of an even keel and Damien’s offer to leave her team alone if they stop trying to fix the timeline seems genuine enough from a certain point of view. It’s good that Sara more pretends to consider it than actually considers it but it might have been interesting if she had actually thought about securing the safety of her crew by letting him do whatever he wants through time. Of course it is all killing time before a big sword fight between the two of them that is immensely entertaining to watch. Seeing Damien’s skewed view on morality when he agrees to not use magic but doesn’t extend that promise to his daughter.

Amaya learns that Kuasa is her granddaughter in this episode and it is as much of a shock as you might expect. Kuasa’s resentment of Amaya is put out in the open when she mentions that Amaya shows favouritism towards Mari even though Kuasa felt that she was more worthy of the Totem. It also further complicates things for Amaya on a personal level as she now has to deal with the fact that she has to fight and possibly kill her own granddaughter. It’s an impossible situation and will only get worse as things progress. The connection between the Totems is still a lingering mystery that will continue to involve Amaya, Kuasa and Zari in some mysterious way. 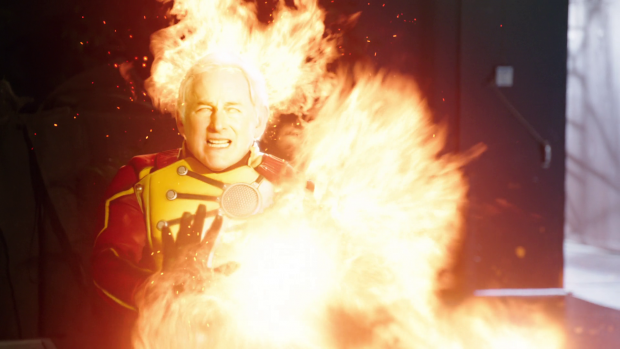 The latest attempt to separate the Firestorm bond results in Martin and Jax switching bodies. The episode is quick to reference Freaky Friday and wastes no time in having fun with it. Franz Drameh imitates Victor Garber’s style of line delivery really well to often hilarious ends and Victor Garber is perhaps less recognisable as Jax though gets to play a more relaxed character than he usually does. I wish I could say that one or both of the characters have a profound realisation about the other but that doesn’t really happen here though there is some mention of Jax gaining further empathy for how difficult it is for Martin to be adventuring at his age. Instead it’s all about the fun as well as establishing that Martin is allowed to sleep with Hedy Lamarr (Celia Massingham) should the opportunity arise. This “hall pass” is an endless source of amusement for Jax who likes finding out about Martin’s naughtier side.

Meeting Hedy Lamarr is a dream come true for Martin who appreciates her more as an inventor than an actress. He accomplishments as an adventure rather than an actress are at the heart of how she is used in this episode. When Helen’s appearance stops her from achieving fame as she was meant to the Waverider shuts down because some of the key equipment is an evolution of things she invented. It shows her importance and raises the stakes in a way that links to the characters as well as continuing the theme of female empowerment.

Hedy Lamarr’s scientific background comes into play in another way when she tells Jax as Martin that they have to merge; she has no reasonable reason to think this will work but it’s another reference to her keen scientific mind. Showing Martin’s body as being dominant once they merge makes no real sense as it has been established that the matrix favours the best physical specimen. It’s a minor nitpick but a nitpick all the same. 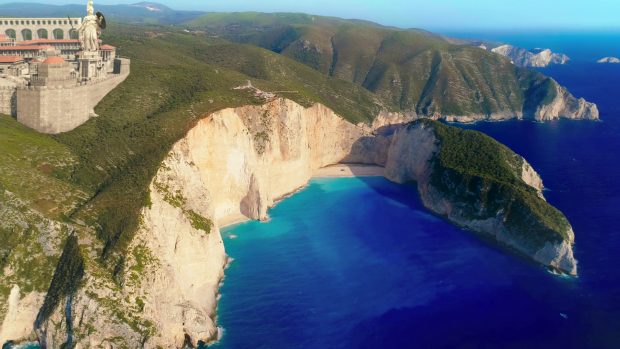 Another immensely entertaining outing for this show. Helen of Troy finding herself in 1930s Hollywood is a good idea as it shows the similarity between the Hollywood studio system and ancient Greese as well as establishing how magnetic Helen of Troy was to any man she comes across. Having her inspired by strong women among the ranks of the Legends is another good idea as it clearly gives her hope for the future even though she knows she will never experience it. Her connection with Zari works as they are both resentful of their native time periods and looking for a second chance. Zari taking her to Themiscyra was an appropriate conclusion as it gives Helen what she wants while expanding the Arrowverse further.

Damien Darhk is good value as always though he is becoming less threatening as a villain since we have seen him taken down by the Legends before. I suspect that Eleanor will become more important as the season progresses. The use of Sara and Damien’s feud was a nice touch even if their brief conversation was merely an excuse to get them into a sword fight. Amaya finding out Kuasa is her granddaughter was nicely done as it makes the conflict more personal for her while allowing the mystery of the Totems to linger on. Jax and Martin’s body switching makes for an entertaining plot and a constant source of comedy throughout. Martin’s admiration for Hedy Lamarr was nicely handled and focusing on her significance as an inventor was great.