“Land of the Lost”

DC’s Legends of Tomorrow heads to the Cretaceous Period as the team enter Rip Hunter’s mind to restore him to his former glory.

At some point in its life cycle a time travel show has to do an episode with Dinosaurs. It’s practically a rule and there’s always a sense of excitement that comes with human beings interacting with Dinosaurs so it’s good if a show can take advantage of it. Of course we already had a taste of this in the first episode of the season but it makes sense that the writers would want to play around with this for longer than a few seconds. 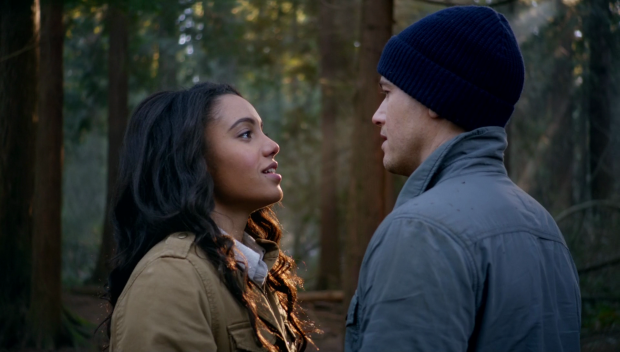 Nate and Amaya are hot for each other

There’s almost a comical edge to the way this is handled as this episode wears its limited budget on its sleeve. There have been some effects, sets and costume heavy episodes in the past few weeks so it’s clear that this outing was designed to save some money. Including Dinosaurs might not seem like the best way to do that but I like that the episode completely runs with the low budget B-Movie feel.

The majority of the outdoor scenes involving Ray, Amaya and Nate have them running away from an off-screen sound clip that is represented by camera angles and a roar. It does the job while making the whole thing light hearted and humourous. Ray clearly isn’t afraid of “Gertrude” so we shouldn’t be either. All these scenes really need to be are an excuse to get these characters off the ship while exploring the dynamic between Nate and Amaya so the lingering T-Rex threat isn’t something to be overly concerned about. The obvious question raised by the scenario is why Ray doesn’t simply suit up as the Atom and retrieve the missing part in next to no time rather than running away from an off-screen T-Rex. It isn’t addressed but the scenes were entertaining enough so it isn’t a big issue for me.

Nate and Amaya’s relationship is handled well here. They haven’t spent much time together since their passionate encounter but they still have a great deal of chemistry which suggests that there is more to it than the casual fling they had. Amaya has been inspired to revisit her views on fraternisation with members of her team by Courtney and is now willing to explore whatever it is that is between her and Nate. There are a few attempts to take advantage of the situation before Ray interrupts at the exact wrong moments.

I would be irritated by that if it wasn’t for the fact that it was completely intentional. Ray often acts so clueless and excitable which makes it easy to forget how much of a genius he is in those moments. The episode cleverly punctuates this by reminding the audience of his intelligence as well as his resourcefulness by showing how easy he finds it to survive in the Cretaceous Period and detailing the methods he came up with to ward off predators. 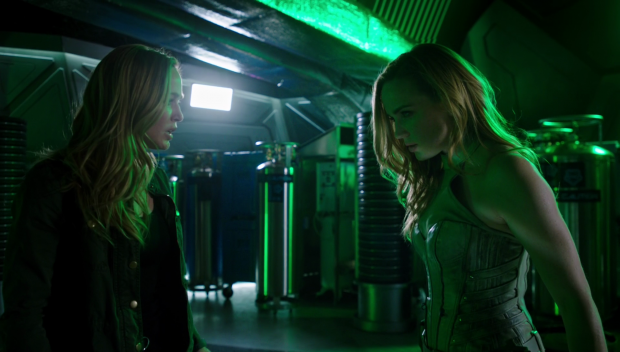 His conversation with Nate about pursuing a relationship with someone on the team is another example of this. It turns out that his last second interruptions were completely intentional and that he was only feigning ignorance about the situation until he could talk to Nate about it. He experienced pursuing a romance with a teammate last season and it ended poorly for him so he doesn’t want to see Nate go the same way. Adding to that is the fact that Amaya is actually important to the timeline because her granddaughter is destined to set herself up as a hero in Detroit. This means that Amaya will need to return to her own time at some point or the timeline will be significantly altered. Nate’s relationship with her could be a barrier to that which is a problem since the Legends claim that their mission is to prevent significant alterations to the timeline. Nate is in a difficult position here because he knows how Amaya will end up but can’t tell her about it.

This is played down by the end of the episode when Ray decides that Nate can be trusted to keep things casual but Nate realises after a really cool encounter between “Gertrude” and Amaya using her totem to embody the essence of a T-Rex that he is starting to fall for her and being casual is no longer something he can do. I imagine parts of the next few episodes are going to focus on him trying to break it off but being caught up in the passion of the situation.

The rest of the team are involved in a risky endeavour to restore Rip Hunter to his former self by going into his mind and trying to repair the damage done by Eobard Thawne. This is a fairly common science fiction plot and this episode doesn’t really do anything new with it but the characters are all used well within this story. I liked that it was Mick’s idea as a callback to his time as Kronos when the Time Masters used this technology to bring him around to their way of thinking and it makes sense that he wouldn’t want to be anywhere near it given his past experience.

Jax and Sara are the ones to go in and it impacts them in different ways. Sara sees it as a combat trial and fights her way through manifestations of Rip’s subconscious trying to defend him. Naturally this takes the form of characters in the show or Vandal Savage’s henchmen as a budget saving measure but it’s great to see Sara square off against herself. The fight choreography was great and it was believable having two Sara’s on screen at the same time. The Waverider sets are nicely dressed to look dark, claustrophobic and intimidating as well so this is a good example of the production team doing a lot with fairly limited resources. 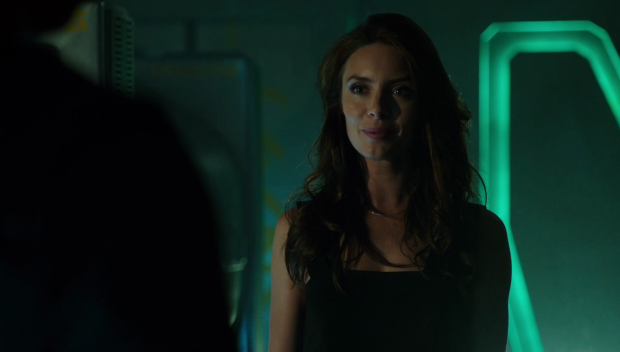 Sara is the one who is able to help Rip regain his confidence and with it his former self. She doesn’t get him all the way there but definitely starts him on that path by reminding him of who he is and helping him realise that he has the power within his own mind.

The scenario is different for Jax as he sees it more like an engineering problem. His outlook is all about finding the problem and fixing it rather than fighting his way through. This leads him to interact with a manifestation of Gideon which allows Amy Pemberton to play the character in person rather than simply being a disembodied voice. She does a great job in the physical role while bringing out the playful personality that she has given to the voice since the show began. I hope the writers can find more excuses to give Gideon physical form because it worked so well here.

It’s Gideon that is able to restore Rip to his former self which makes sense given how well established Rip’s connection to the Waverider was last season. If anything was going to bring him to his senses it would be the ship that carried him and the A.I. that helped protect him through all the trials he faced. It’s a surprisingly effective scene when Gideon appeals to his better nature and Rip accepts this by kissing her. It’s really corny and ridiculous but it genuinely works on screen.

Arthur Darvill has delivered really impressive performances since his return. He has believably played the film student Phil, the evil Rip Hunter and now the lost and vulnerable Rip trapped inside his own mind. He finally gets to return to his old self at the end of the episode and it’s a testament to how good an actor he is when he is able to easily slot into these challenging roles that make him act completely differently each time. 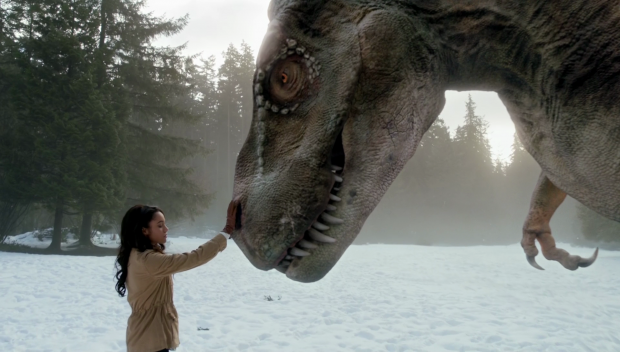 There is a big question mark over what Rip’s role will be in the show from now on. Sara is firmly established as the Captain now and the crew are certainly loyal to her which may create friction if Rip wants to recreate that role. It’s also not impossible that Rip might want to step down entirely once the Legion of Doom are defeated which frees up the Captain role for Sara in season 3.

Some things about the episode didn’t work quite so well. I found Martin’s hysterical concern over Jax’s well-being to be really out of place because he doesn’t normally come across this way. It has been a while since the show did anything with their connection so it could be that Martin was feeling Jax’s anxiety but that didn’t really stack up with Jax’s behaviour when in Rip’s mind. This did allow for a really good showing from Mick who encouraged Martin to trust Jax since they are partners and are supposed to trust each other unconditionally. Mick clearly cares about his teammates and it’s always interesting to see him relate his criminal loyalty to his experiences with the team.

Another minor issue was Rip being able to sabotage the Waverider by talking to Gideon. The fact that Gideon talks to him to tell him that she has been told not to doesn’t really work because Gideon isn’t a living thing. She’s a machine who is programmed to follow orders so articulating that she isn’t following those orders shouldn’t be something that happens. If she had remained silent and then Rip activated a dormant protocol that nobody else knew about then that would have been far more effective. This is definitely a nitpick but it did stand out.

Another strong episode that makes good use of the characters and tells the binary stories really well. Ray, Nate and Amaya running away from a mostly off-screen T-Rex worked surprisingly well despite the overhanging question of why Ray didn’t simply suit up to retrieve the part. It was supposed to be light hearted judging by how unconcerned Ray was by the nearby T-Rex and allowed the Nate/Amaya relationship to be explored. The added complication of her being important to the timeline means that it’s something that can’t really go anywhere and the episode ends with Nate realising that he’s falling for her. There are more complications to come I’m sure.

The journey into Rip’s mind works really well. It allows Sara to fight herself and Gideon to take physical form all in one so there’s a lot of fun to be had here. Seeing Gideon be the one to convince Rip to regain his confidence and go back to his old self is oddly fitting and it’s a genuine moment. There is a question over Rip’s role in the show now that Sara is Captain but we shall see how that plays out. Martin’s hysterical concern over Jax’s well-being doesn’t really work as it doesn’t seem to come from anywhere but it does allow Mick to explain how a partnership should work so there is merit in it. 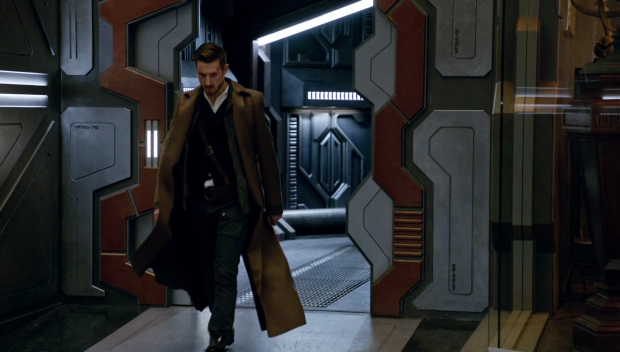