DC’s Legends of Tomorrow picks up right where the previous episode left off with a broken timeline resulting in some hilarious changes for the characters.

I’ve said this on repeated occasions but I continue to be both impressed and baffled by the confidence in which this show throws insanity at the audience fully expecting it to be accepted. The combination of time travel and magic this season has given the writers infinite freedom to do pretty much whatever they like and they are gleefully taking advantage of this. 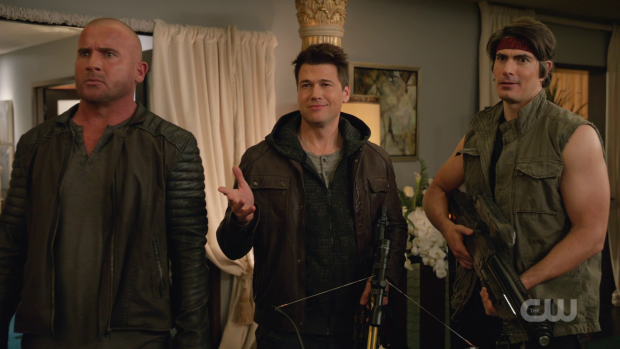 The guys do not take Sara’s death well

John’s intervention in his own personal timeline to save Desmond’s life has caused major disruptions that have fundamentally altered what passes for normality on this show. The first change is that the Legends become an A-Team style group who shoot first and never ask questions when hunting magical creatures. This comes complete with a hilarious makeover for Ray who has become more bloodthirsty yet never forgets his manners. The best part is that this is punctuated by an over the top opening title sequence for the revised team name; “Custodians of the Chronology”. I’m not sure what the purpose of the title sequence is beyond audience entertainment but it certainly worked for me.

The reason behind this change in the mission statement of the team is that Sara was killed by the Unicorn and this is apparently how they respond to grief. That part doesn’t quite track as it isn’t consistent with the established characters who have lost team members in the past yet never gone off the rails quite like this. Considering the other changes that occur through continued meddling the writers apparently would like us to accept that this is how the Legends react to loss. In this case it’s style over substance when it comes to justifying what happens in terms of how the characters behave which spoils the fun somewhat.

On a structural level this episode is about revisiting some of the key moments from this season so far in order to prevent whatever it was that caused the Legends to fundamentally change the way that they do. The first stop is the Unicorn which is dealt with by a handy blast from the Jump Ship that presumably returns the timeline to relative normality. Unfortunately this changes things in a different way with Ray, Mick and Nate dying at the wand of the Fairy Godmother which somehow results in Sara, Ava and Gideon in human form -because magic?- forming a Charlie’s Angels style trio called the “Sirens of Space-Time” with Hank as their Charlie analogue. Their personalities are fundamentally altered as well as they are now basically sass talking bimbos who let Charlie get away because Sara stops to appreciate her own innuendo. Once again, this is in stark contrast to the established characters without entirely justifying why. This is “fixed” by convincing Prudence to release the Fairy Godmother before she can kill Ray, Mick and Nate. 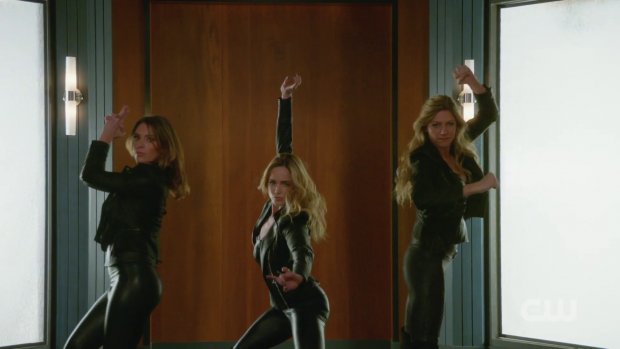 The girls don’t cope much better

Naturally this doesn’t work either and creates a timeline where the Legends are puppets because Mick decided to tether himself to the Fairy Godmother who turns them into puppets following an offhand comment from Mick. This one I do believe as Mick is still the sort of person who would do something like that because he’s motivated by his own self interest. His partnership with the Fairy Godmother creates the hilarious visual of them being partners in crime.

All of these bizarre alternate timelines come to pass because John didn’t join the Legends. This episode is basically about John accepting that he’s an integral part of the team through exploring what the team would be like without him in it. Come to think of it this is essentially the DC’s Legends of Tomorrow version of It’s A Wonderful Life. It quickly becomes clear that no matter what Charlie and John do they will never be able to restore the timeline and the Legends to their former glory. Saving Desmond did too much damage so John will eventually have to accept that there is no way he can save Desmond without causing catastrophic problems.

In order to fix the timeline John has to be willing to make the necessary sacrifice and restore the events that led to Desmond being sent to Hell. For it to be meaningful he has to accept that some things can’t be changed and that loss is something that he has to deal with. Zari calls it a rite of passage for the team and it’s easy to see where she’s coming from in that regard considering she had to learn the same lesson not so long ago though not quite so tragically. 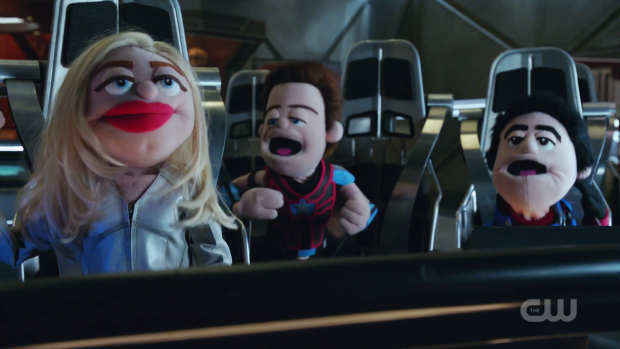 Now for some puppets

Matt Ryan is excellent in this episode. At first he plays John as maniacally confused because he has memories of two different timelines and becomes more tortured as the episode progresses. It gradually becomes clear to him that saving Desmond is impossible and the more he realises that the more crazed he becomes. This culminates in a great scene where he owns up to all the mistakes he made and gets to tell Desmond exactly how he feels about him. More importantly he gets to apologise for what happened and make this regret clear to Desmond so that he can gain some form of personal closure. He immediately erases his memory but there’s catharsis associated with simply getting to say those words and properly say goodbye to Desmond. Of course it doesn’t really change anything and John will still be tortured by this for the rest of his life but at least some comfort can be gained from saying the words

Once the timeline returns to normal John wastes no time in opening up to Sara about what has just transpired which definitely counts as personal growth for John who fully accepts what he did and that there are consequences of it. John has always been established as a loner who opts to work with others when it suits him but finding it within himself to let go of Desmond opens him up to needing others in his life. This basically makes him a fully fledged part of the team who will contribute to the overall mission in an effort to honour and avenge Desmond. It’s also always good to see John and Sara interact given how similarly damaged they are. They have a consistently watchable dynamic that is used well here.

This is an important episode for Charlie who is initially motivated to ensure that she gets to keep her powers without the timeline being broken. The fact that she’s willing to fix the timeline rather than writing it off as a consequence of her powers being restored starts to show how far she has come since joining the team. Constantly returning to the Amaya form is also telling as it shows that she’s starting to identify herself in terms of how she relates to the Legends. Of course it’s narrative shorthand so that viewers always know who she is but on a deeper level it suggests that she is becoming comfortable with what that form represents for her. By the end of the episode she realises that her presence is essential when it comes to repairing the timeline and accepts that she is now part of the group. Her contribution was instrumental in changing the team’s outlook on magical creatures so it’s enough to tell her that she can make a real difference if she sticks around. Once again another misfit finds a home.

It’s worth noting that Zari spends much of this episode in the form of a Cat. This gives the episode its title and inspires some of the funniest moments. For whatever reason people can understand exactly what Zari means when she meows which allows her to help move the plot forward through Charlie and John act on what she suggests. The moment she consoles John by tapping her paw on his hand is hilarious as is her making use of the Jumpship’s controls. It is definitely very ridiculous but it also is used to great effect. The lunacy of this show knows no bounds. 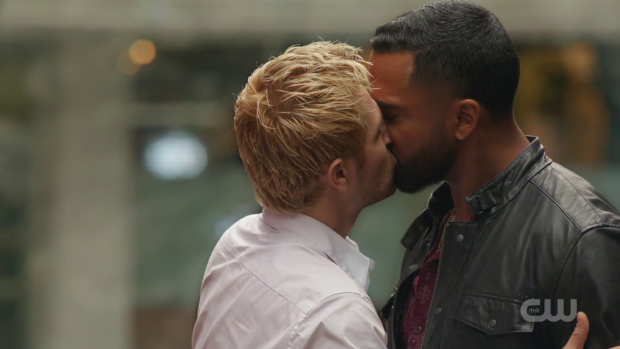 The kiss that saves the timeline

A relentlessly fun episode that combines comedy with meaningful characterisation to create an immensely satisfying experience. The various alterations to the characters that act as thinly veiled references to 80s TV shows don’t quite work in terms of what has been established about those involved but jokes they are executed perfectly with the actors fully committing to the material. There is a lot of variety in the various scenarios and the constant failures set up the revelations for the focal characters nicely. John accepting that the timeline is better off with him as part of the team works really well and is nicely tied to the guilt he feels over the part he played in the loss of Desmond. Matt Ryan’s performance is excellent throughout and is especially moving when John gets the opportunity to apologise to Desmond for everything that happened to him. John also wastes no time in opening up to Sarah about what happened which shows growth on his part as well as acceptance that he is now fully part of the team because he appreciates the merits of not being alone.

This is also an important episode for Charlie who eventually realises that her role in the team is important as she was instrumental in having the team change their opinion of magical creatures. She also comes to realise that she feels like part of the team as evidenced by her efforts to repair the timeline rather than dismiss it as a consequence of getting her powers back. Continually returning to the Amaya form acts as narrative shorthand for the audience but on a deeper level shows that she is starting to identify by that form and as a part of the team because that form is associated with being among the Legends. Zari spending most of the episode as a Cat provides plenty of laughs throughout while also moving the plot forward in both entertaining and unique ways. The lunacy of this show definitely knows know bounds.