DC’s Legends of Tomorrow returns for a second season and proves how fun the concept can be now that much of the dead weight has been lost.

This show really suffered last season because of the Vandal Savage story. He just wasn’t an interesting villain and the constant references to needing to stop him got really tedious. Mostly because the team would persistently fail week on week so the whole thing just felt like it was dragging on. Hawkman and Hawkgirl were a big problem as well especially with Kendra being stuck in dull love triangle plots and whining about her destiny. The Time Masters were another big problem for a variety of reasons so there was a lot dragging down season 1 and preventing the show from realising the potential of the concept. 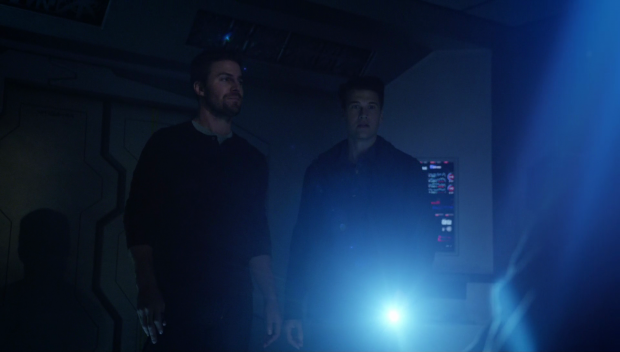 All of those elements are gone and it immediately helps. Time travelling superheroes is a fun idea and this episode takes great pleasure in playing around with it. The early part of the episode encapsulates this perfectly with the team going to France, 1637 to ensure that Louis XIII isn’t killed before conceiving Louis XIV. It is established that this is the latest in a series of missions that the team have undertaken to protect the timeline. It seems that the destruction of the Time Masters has left history wide open to manipulation and the team have tasked themselves with stopping that from happening.

The tone is a light one, the costuming is fun and the pace is quick. Every member of the cast is clearly having a blast and the entire team has something to do so immediately this is a massive improvement over much of the first season. Sequences like this are exactly what I imagined this show could be after that first announcement trailer. There were elements I didn’t like such as Sara’s seduction of Anne of Austria. It felt a little gratuitous and out of place. Sara being bisexual is used as a joke more than once in this episode but there are more mature stories that could be told rather than her seducing women throughout history. Maybe that will come but in this episode it does feel a little unnecessary.

Of course, with everyone having so much fun it’s easy for the episode to be lacking in meaningful stakes. This does happen here but a large part of the problem is that the bulk of the episode is told through flashbacks. It is established early on that the Waverider is caught in a nuclear explosion in 1942 so the rest of the episode is built around them getting to that point. There is a bit of a mystery around what happened to the team but for the most part we know the end result and it robs the episode of any real tension. 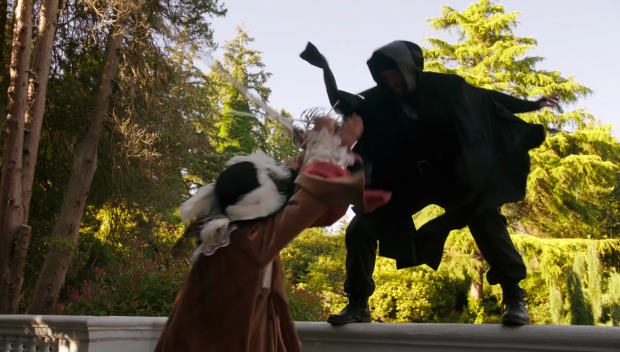 Since the episode seems largely focused on being fun it doesn’t really matter but if the trend of lacking tension continues then it’s possible that the show might feel disposable. I hope I’m wrong and it’s just a blip encountered in this episode but it’s something the writers need to watch out for.

The 1942 part of the episode is really well done and takes full advantage of the time travel premise. Having Martin and Mick interact with Albert Einstein (Joe Rubinstein) is really entertaining and the episode does a good job of subverting the expectations attached to this historical figure. Characterising him as a slimy womaniser is counter to what viewers might expect and it’s fun to see that he has more in common with Mick than Martin. Historical figures not measuring up to expectations is a fairly common trope in time travel stories but this is well executed enough that it doesn’t feel overly cliché.

Joe Rubinstein’s performance as Albert Einstein is somewhat cartoonish with no depth to it whatsoever which does undermine the tension somewhat but there’s no denying that it does tick the box of having a recognisable interpretation of Einstein that works within the confines of the plot of this episode. In some ways it doesn’t need to be any more than that. Incorporating historical figures is difficult and it’s something that Doctor Who often struggles with. The temptation to reference everything they are known for as a wink to the audience must be high and there’s an element of that in this episode but it’s largely understated. 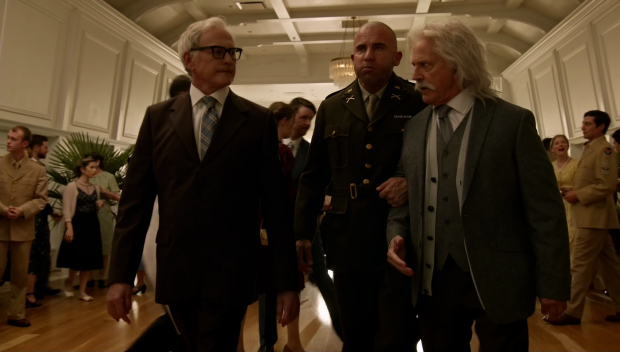 Surprisingly there’s more made of his ex-wife, Mileva Marić (Christina Jastrzembska) who is also credited with helping create the Atomic Bomb and becomes a secondary target for the Nazis that the team don’t anticipate. This means that they waste all of their time on Einstein and don’t anticipate that the Nazis have another plan. It’s a clever surprise that keeps the audience guessing.

Neil McDonough makes a welcome return as an earlier version of Damien Darhk. It turns out that he is no less devious or diabolical in the 1940s and he’s several orders of magnitude more charismatic and menacing than Vandal Savage ever was. McDonough carries himself with an effortless swagger that makes him magnetic as a villain so having him in this show is definitely an asset. Having him team up with Reverse Flash has lots of fun possibilities too so I’m excited to see what problems this villain team-up can cause the team in future episodes.

Damien Darhk also has a personal connection to Sara who wants to kill him as revenge for him killing Laurel. Thanks to time travel shenanigans she is hell bent on punishing him for something he hasn’t done yet. She thinks that killing Darhk in the past will stop him from killing Laurel in 2016. She may be right but the potential changes in the timeline would be significant and I’m surprised that Rip doesn’t come down harder on her. I probably shouldn’t be at this point as this entire franchise seems to be very cavalier in its approach to time travel and the consequences of it. 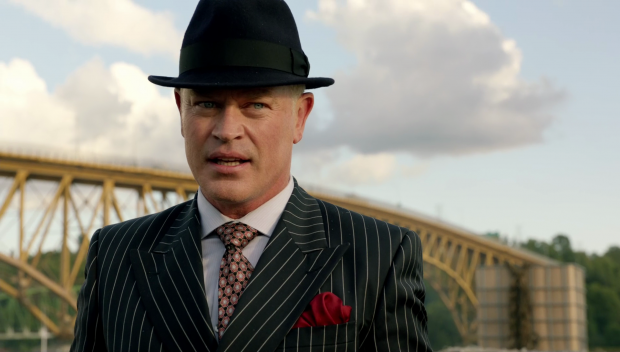 The object of Sara’s hatred

Sara being consumed by revenge is a good idea in theory but in practice it comes across as being really shallow. There is some conflict when Ray interferes in it but it’s nothing major and it doesn’t really develop the characters in any way.

That’s part of the problem with this episode in general. All of the characters are very broadly drawn to reintroduce the audience to them but very little work is done to establish what the character arcs will be for the season. Sara is the only one who has individual motivation so far with the rest of the episode being more focused on telling a bigger adventure driven story about Nazis trying to nuke New York City. It’s fine as a season opening adventure but some character work will need to be done so that proper dramatic stakes can be established.

Another issue is that things are introduced and resolved in favour of moving the plot forward without really impacting the characters. Rip supposedly sacrifices himself to save the team before the nuke hits and sends them into different time periods. Mick stays behind because he would never survive time travel after suffering a gunshot wound and he needs to be there to explain the plot.

Scattering the team across time is a good idea as it could create stories for the next few episodes as they are rounded up and brought back together but instead it’s resolved in a matter of minutes. I can understand the desire to move the plot forward but I can’t help but feel that there are missed opportunities for stories in here. Who wouldn’t like to see Ray running around in prehistoric times or the events leading up to Sara being accused of Witchcraft? The episode is more concerned with pointing out that these things happened before moving on with the next thing. There is no time to explore the effect being scattered through time has on the characters. 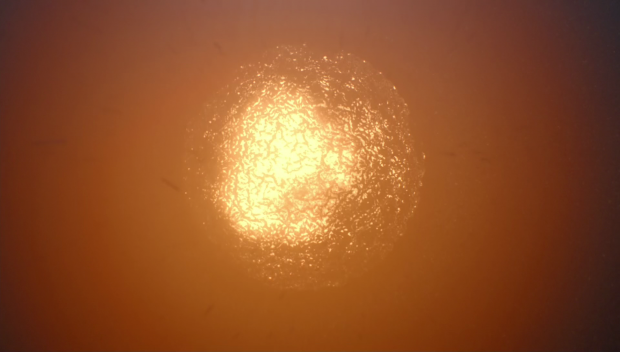 In fairness, that next thing is introducing the Justice Society of America so that has plenty of potential. There is still the question of what happened to Rip Hunter but I imagine his absence is to allow new characters an opportunity to develop.

The flashback storytelling both worked and didn’t. I’ve mentioned that it robs the episode of tension but it is an effective way to introduce the new character Dr. Nate Heywood (Nick Zano); a historian who has been following the exploits of the team for a long time. Once he discovers the 1942 mission he seeks out Oliver Queen to help him investigate. Heywood already seems like an intelligent character and having a historian join a time travelling team is a good idea but it does seem oddly familiar considering that Timeless is doing exactly the same thing.

Heywood does prove himself in this episode as he manages to change history in a way that doesn’t break the timeline. It’s significant in that it downplays Einstein’s role in history but it also gives Mileva Marić credit for the work she did. This gives us an idea of the level of insight that he can offer. 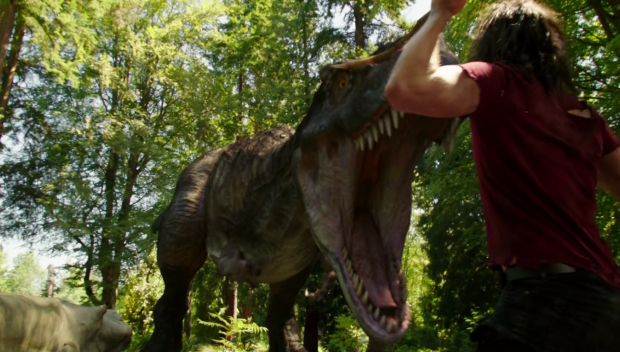 Ray takes on a dinosaur

It’s slightly disappointing that the new guy is another white male as the departure of Kendra means that the team is really lacking in diversity. This should change with the introduction of the Justice Society of America at the end of the episode but it’s definitely something the show really needs to watch out for.

I found it a little confusing that the cliffhanger from the first season is basically ignored other than a brief mention. Why was there another Waverider? Why was Rex Tyler sent to warn the team? Where did he go? It seems that these questions won’t be unanswered for long but it does feel like the cliffhanger was ignored and it may yet be.

Oliver Queen being in a support role is interesting as it’s something we haven’t seen him do before. The episode could have been done without him as he only provides the resources to find the Waverider at the bottom of the Atlantic but if a character is needed to do that then it might as well be someone that reminds us that this show is part of a connected universe. It adds scope to the universe without making a big deal of it. 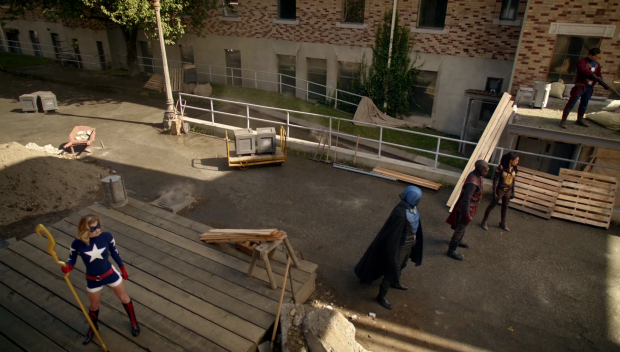 The Justice Society of America!

A fun if shallow season opener that ditches the dead weight from the last season and focuses on fun. There are really good sequences like the early one in France and the characters are having a lot of fun cleaning up the timeline. The flashback storytelling robs the story of a lot of its tension and the characters are a little too broadly drawn so there’s no real indication of what the plans for them are for the season. This sort of storytelling is fine for now but risks becoming disposable if it carries on. Dramatic stakes and tension will be needed to stop this show slipping into silliness that can be ignored.

There are some missteps such as scattering the team through time only to have it resolved minutes later. Those stories could have filled up some interesting episodes but the show seems concerned with moving onto the next thing. It may not be a bad thing since the next thing is introducing the Justice Society of America.