DC’s Legends of Tomorrow goes back to the Old West to help Jonah Hex deal with a problem that could damage the timeline.

I’ll preface this by saying that I’m not a fan of Westerns and never have been so there’s only a certain amount of enjoyment I can get from an episode like this. It’s a personal choice and the only Western I’d say I like is Back to the Future III. I know many would say that it isn’t even a Western but it’s close enough as far as I’m concerned. Does that mean I think that this was a bad episode? Far from it but my enjoyment level was skewed by the time period it was set in. 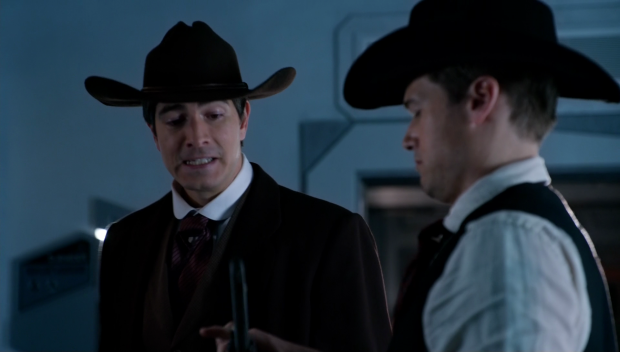 Ray tries to be the voice of experience

This episode does do a lot of things right when it comes to characters. Jonah Hex seemed like something of an afterthought in his appearance last season but he is an integral part of this episode and has a chance to develop as a character.

Giving him a villain in the form of Quentin Turnbull (Jeff Fahey) was a nice choice as it allows us to see Hex as a contrast to Turnbull while giving Johnathon Schaech a good opportunity to show what he’s capable of as an actor. His performance is good and builds Hex as a sympathetic characters with his own code of honour that he sticks to. We also get some insight into his past through revealing how he got his scars. Turnbull had a huge impact on his life which is represented through his scars. It’s not an especially deep antagonistic relationship but it gets the job done. I would have liked to see more done with their reasons for hating each other as it wasn’t hugely clear why Turnbull hated Hex.

Turnbull is an entertaining enough villain who offers up a solid threat for the Legends in various ways. His plan is very high stakes as the United States of America could be completely altered if he succeeds so the whole story is given a sense of urgency and Turnbull is established as being a problem worthy of their attention.

More could have been done to make Turnbull a bigger deal within the context of the episode itself. Fahey brought a lot of charisma to the role and it elevated the material but there wasn’t really much to him beyond that. I never felt the sense of menace that the episode was trying to tell me existed which made it hard to invest in everything he was doing. 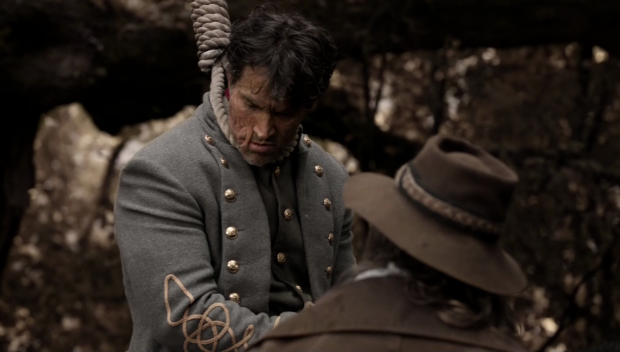 Jonah Hex finds himself in a spot of bother

His interactions with Mick were the most interesting but didn’t quite go as deeply as I would have liked. Seeing them get along and sharing stories of their criminal exploits was well handled as it’s good to see Mick’s questionable morality be let out for fresh air now and again. He isn’t a reformed criminal and only stays on the team out of loyalty. It’s good to be reminded of that and it constantly makes Mick a fascinating character. I was expecting Mick to be more tempted by the outlaw lifestyle that Turnbull lives like he was in “Star City 2046” and it would have lent itself to him ultimately turning him down to show how far he’s come since then..

The idea of him admitting that he’s a wild animal who just wants to watch the world burn is an interesting one. He has always been more than a little unstable so it’s good to see this explored through him battling his self destructive urges. He wants to cause harm to people and destroy things just to see them destroyed. It’s a really delicate tightrope that he walks between sanity and mania that doesn’t always equate to good choices from Mick. Dominic Purcell always sells this perfectly and this episode is a good showcase for his talents.

One thing that Mick definitely needs is a partner to stop him from going too far. It’s a shame that there wasn’t more time spent on his attempt to create a partnership with Ray as the clash in their personalities was an interesting one but that seems to have been completely shelved.

Amaya is a good choice as his partner as she somewhat understands what she’s going through since her powers are about dealing with animalistic urges. She doesn’t just gain whatever animal ability she triggers as it comes with the instincts so she has to work really hard to control that. This makes her well suited to give Mick advice and their partnership is an interesting one as their personalities clash while complimenting each other. It’s also good development for Amaya who has to find a way to move on after what Obsidian said last week so she has to work to become more of a part of the team. She’s a solid addition and having her become a proper part of the team can only be a good thing. 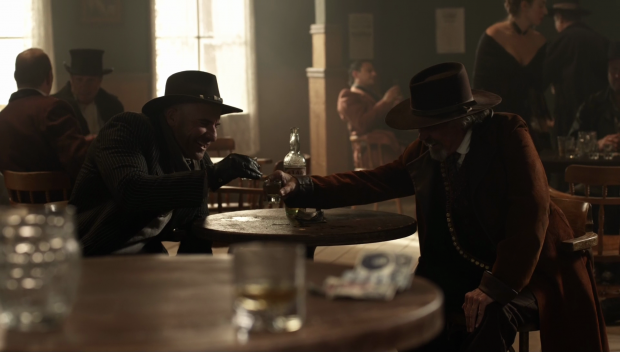 Ray is a little drunk on his prior experience of this time period and lords that over Nate who is trying to perfect his cowboy persona. This back and forth mostly works as we saw how out of his depth Ray was last season so it adds a meta layer to it when we know that he’s essentially talking nonsense.

After a couple of episodes without the Atom suit Ray discovers more Dwarf Star material so that he can start to build a new one. I knew that this would come sooner rather than later but I didn’t expect it to be in this way given that he had a lot of trouble getting a hold of a small amount to build the suit in the first place but it’s good to see that he’s on his way to getting his suit back.

It could be said that Ray getting his suit back so soon is a bit of a cop out but I don’t agree with that. Since he lost it there has been a lot of time spent on him questioning his role within the team and exploring his sense of self worth. He has now reached a point where he’s aware that there is more to him than his technology so, in theory, he can rebuild the Atom suit and use those personal lessons to become a more effective part of the team. Whether that happens or not remains to be seen but the potential is there.

There’s a running gag involving Nate wanting to be a superhero and winding up in the library doing research instead. This brings back his overly cautious childhood where his haemophilia meant that he couldn’t take any sort of risk as injuries that made him bleed could prove fatal. The story he tells about standing up to a bully not going so well is excellent delivered by Nick Zano and really points out how Nate feels about the situation. In his heart he’s a man of action but his skill set makes him ideally suited to research the time period before going in. It’s an amusing running gag but Nate’s contribution to the episode does little more than show that he has multiple uses. Seeing him stop the train was both amusing and cool to look at. I also think his suit looks cool. 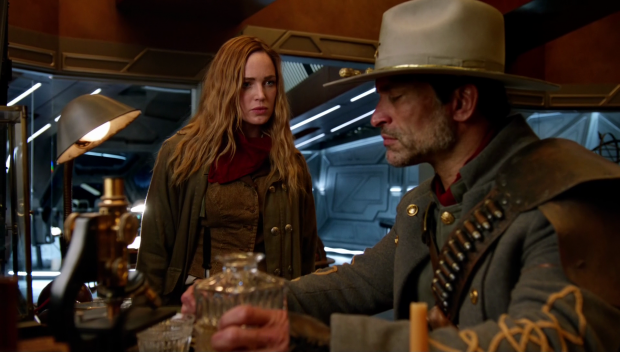 Sara puts Hex in his place

Likewise, Sara’s contribution to the episode is limited. She takes on the leadership role that we have seen her sink so easily into over the course of this season but the most interesting thing was her interactions with Hex who doesn’t really respect women and completely disregards her abilities. Sara is quick to put him in his place and eventually he acknowledges that she is really good at what she does. Sara’s a great character so I’d like to see more episodes where here leadership skills are truly tested.

Martin is having problems with his memory being overwritten as a result of the changes made to the timeline last week. He has flashes of a woman who he knows that he loves but doesn’t have any context for his feelings. Naturally he’s concerned that something happened with Clarissa and he is no longer married to her but my theory is that this is his daughter who was born after young Martin took his advice about being a more attentive husband. I suspect we’ll find out in two weeks when the team travel back to 2016 to participate in the highly anticipated crossover. Colour me excited.

A solid episode that develops many of the characters in interesting ways but drops the ball on having a villain who is actually menacing. Turnbull is entertaining enough but largely down to the actor performing him rather than the writing. I never got the impression that he was as threatening as the episode needed to be and his antagonistic relationship with Jonah Hex isn’t especially well developed. More depth is added to Hex which is good as it makes him feel like part of the story rather than a bystander. 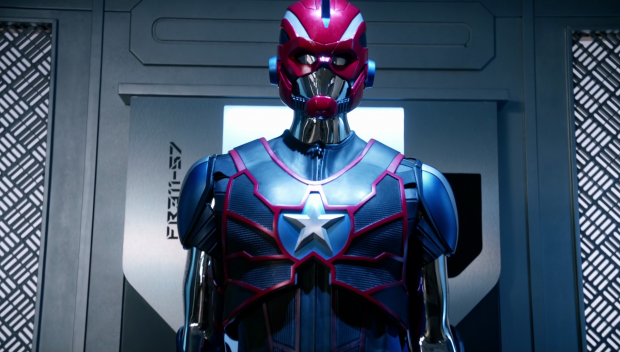 Nate gets a cool suit

Mick is well handled here as he struggles with his animalistic side until Amaya offers some insight into how she controls hers. They are a natural pairing and Amaya blending more into the team is a good thing. Sara’s role in the episode is her standard leadership one but it’s great to see her put Hex in his place. Ray tries to be the mentor figure to Nate again which proves to be amusing because we know how out of his depth he was when he was last in this time period. Hopefully rebuilding his Atom suit will be positive as he has learned a lot about his self worth since he lost it. Nate was fairly hit and miss but the running gag of him being the research guy and not the superhero was funny enough. All we can take from this is that he has multiple uses. Martin having his memory reconfigured to show a woman that he loves but doesn’t know why is intriguing. I suspect it’s his daughter but we’ll likely find out next week.