DC’s Legends of Tomorrow returns with a shift in perspective to the android duplicates pursuing the original team.

This season has been really interesting in the altered approach to the storytelling. Separating the Legends from the Waverider and putting them in situations where they have to rely solely on their wits has made for some strong content in the early part of the season. The second half of the season setting up a conflict between the team and warped versions of themselves promises to be a lot of fun. For the purposes of this review I’ll refer to the duplicates by the character names and figure something out when they come to share screen time. 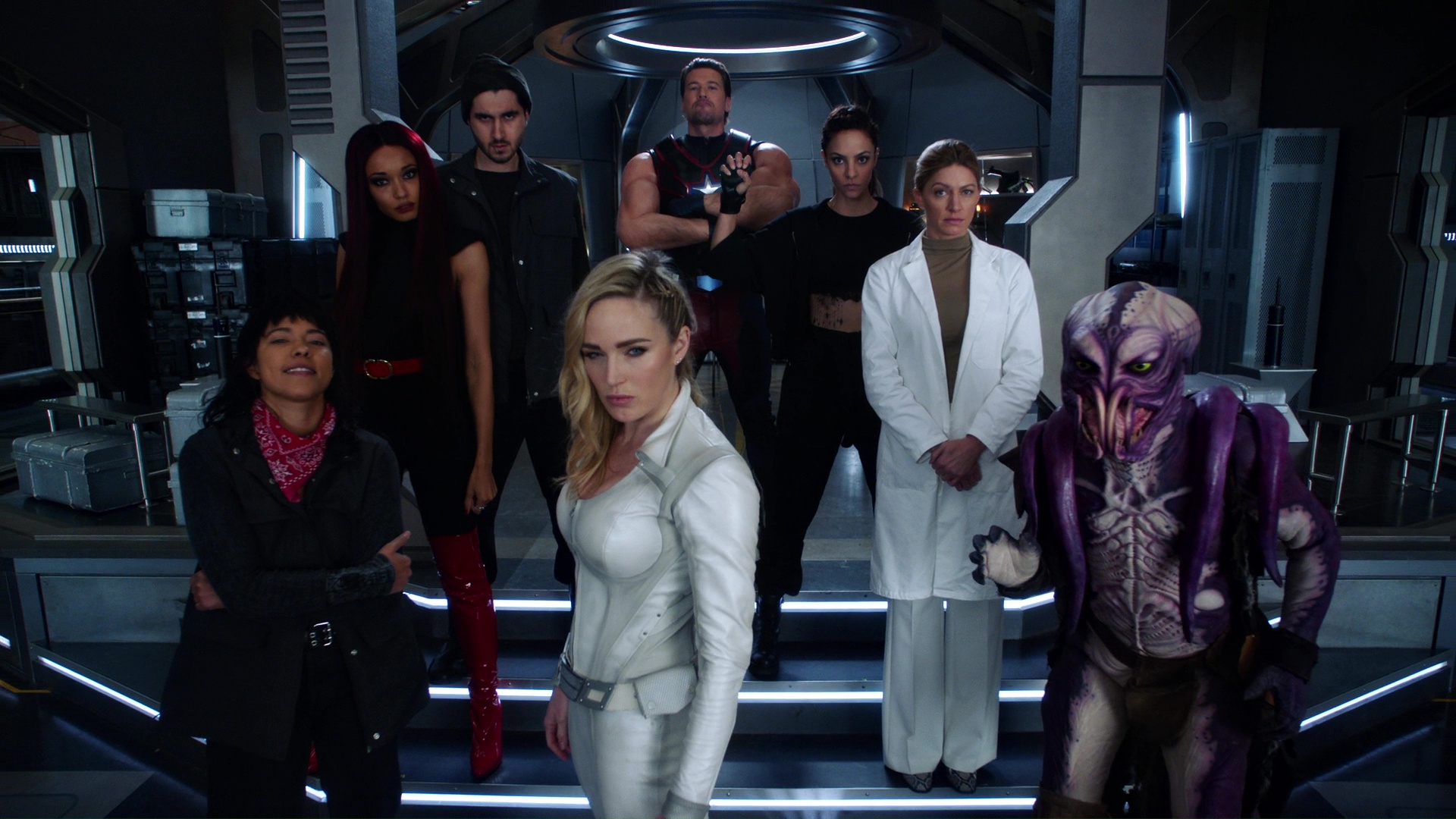 It goes without saying that Legends leans into the ridiculous whenever it can and has a lot of fun with its unique brand of self awareness. Such an approach allows episodes like this to exist where the actors can play dialled up versions of their characters. Supporting those performances is excellent writing that provides depth to these caricatures and outlines arcs for them to follow.

Sara is the primary focus of the episode with her being the one to question the lies that have been fed to them. This suspicion arrives organically when she notices that Zari and Astra being healed by Ava is odd since she saw that they were undeniably dead mere hours before. The scene where Sara questions Ava brilliantly conveys that developing suspicion combined with the strong attraction just beneath the surface. Sara’s love for Ava is so strong that it can’t be erased from programmed android duplicates.

Her attraction to Ava doesn’t overpower that suspicion and she starts seeing their mission from a different perspective. The truth isn’t all that well hidden so it’s clear that these duplicates are made to be closer to the original Legends than intended. Gideon did her job a little too well and has left underlying traits allowing them to question the flimsy setup that exists. It doesn’t take much for the façade to come crumbling down along with the realisation that there isn’t decent justification for the actions the team are taking. Gideon only ever explains the necessity to carry out a given action with “time is like cement”; something that is initially accepted at face value but makes no sense under the slightest scrutiny. 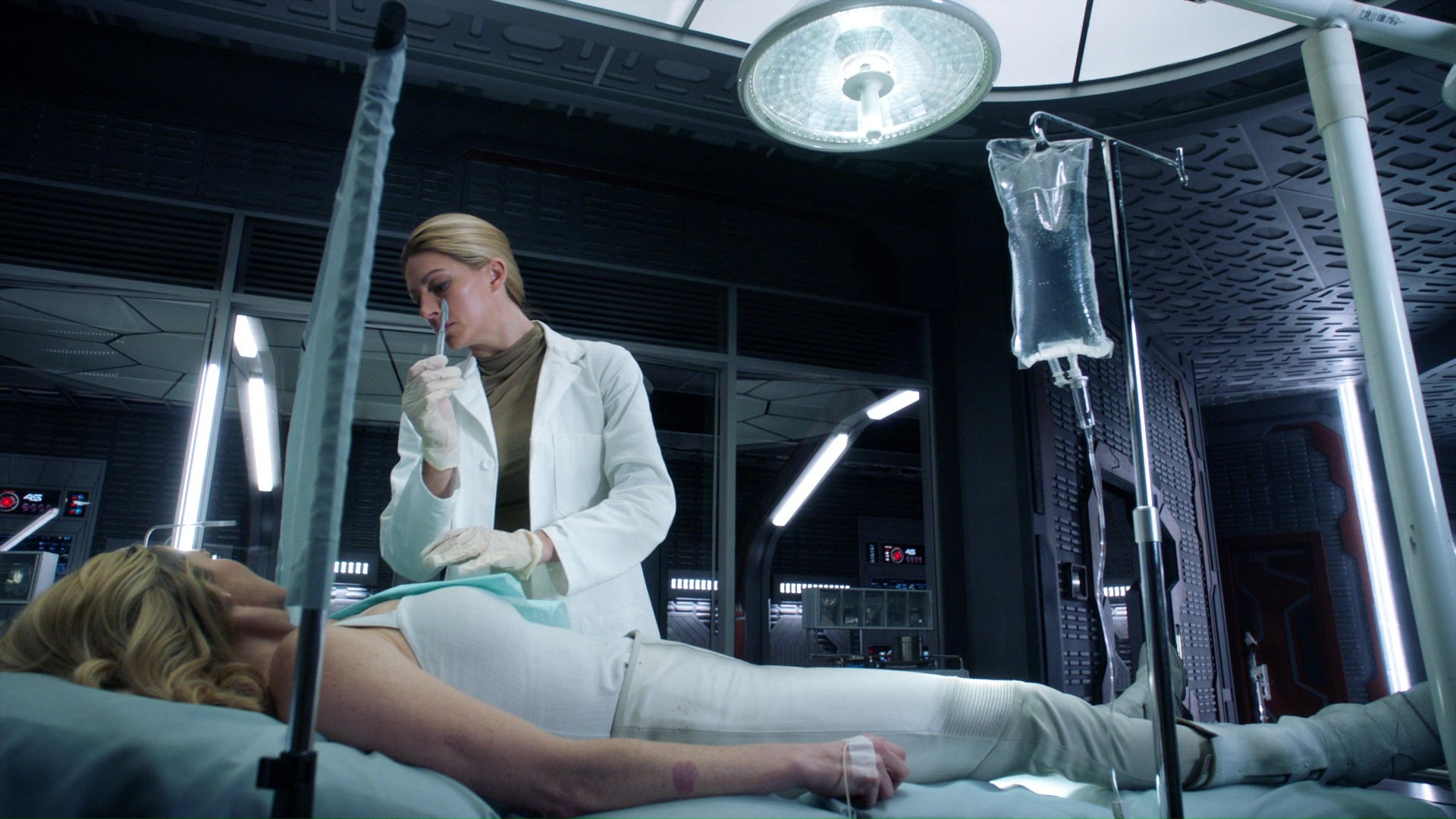 The truth shall set you free!

General Kalashnik (Ego Mikitas) hilariously questions what that means and it feeds into all the other questions Sara is asking herself. She considers all the people they have killed in the name of preserving the timeline and her underlying morality kicks in to tell her that what they’re doing is wrong. An especially poignant example of this is when the team are ordered to threaten General Kalashnik’s family. This is a line that Sara isn’t comfortable crossing and questions the notion that the team could be heroes when they are responsible for so much suffering.

Sara’s suspicions are confirmed when she is shot and observes Ava operating on her. This presents her with proof that she and the rest of her team are the androids pursuing the real Legends. This unravels the lie completely as they have always been told that they are pursuing the fake Legends who are bent on disrupting the timeline. She enlists Zari who is also having doubts and starts to concoct a plan to put them on the right path. The first move is to do the right thing by trying to save Dr. Irina Petrov (Stefanie von Pfetten). The notion that the original Legend disrupt the timeline because they want things to improve is an easy one for Sara to buy into as shown by her recognising that what Dr. Petrov wants to do can only be a good thing. Gideon’s narrative falls apart easily and Sara recognises that she has willingly been complicit in some terrible acts.

Ultimately she appears to fail with her programming restored after Gideon gets Zari back on side. Amusingly she convinces Zari using the undisputable fact that the Legends a mess of history whenever they try to fix it. For all their good intentions it’s difficult to argue with that and it’s enough to convince Zari to buy back into Gideon’s mission. This highlights how powerful Gideon’s programming is and frames it as an oppositional force to Sara’s strength of will. In effect it’s a battle between Sara’s willpower and Gideon’s programming with Sara’s willpower proving stronger. Even though the episode ends with Sara reprogrammed to be obedient this fact provides hope that she will find her way to beat it once again. 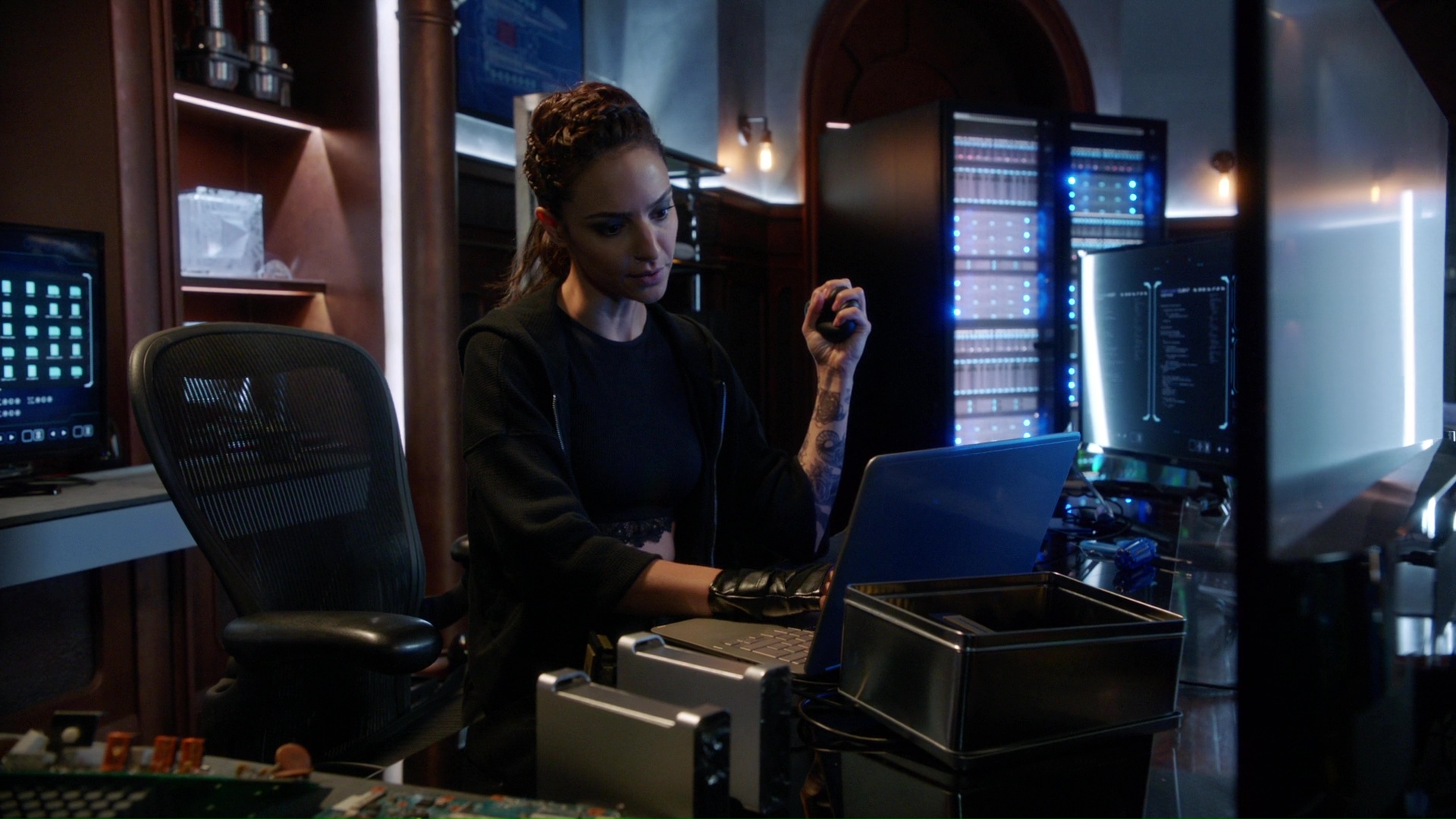 Despite how fun this episode was, it does suffer the drawback of not featuring the characters the show usually follows outside of them appearing in the opening where the end of the previous episode is shown from the perspective of the duplicates. Outside of Sara, Zari and Gideon the characterisation is very shallow with no indication of anything beneath the surface for the others. This is exactly the point as they are set up as dialled up caricatures who take pleasure in the suffering they cause. Ideally there would be the suggestion of nuance to each of them in order to set up the potential for them to find their way to doing the right thing. If there was an indication that they were capable of reflecting then it would have heightened the tension when Sara was starting to realise the truth and keeping it hidden from those she felt she couldn’t trust. This only manifests through Ava with the rest of the team making comments and ultimately shrugging off those suspicions. There’s only so much that can be done in a single episode but there was a noticeable difference between the depth given to Sara and the lack of the same given to most of the others. There was also the opportunity to comment on the existential notion of identity and whether a copy has as much right to life as the original that isn’t even touched one. This may come up later in the season but Sara’s soul searching was a great opportunity to do this.

Ultimately it doesn’t matter too much because the actors have so much fun with the heightened versions of the characters. Nick Zano playing the jacked dumb version of Nate was consistently hilarious. He bounced off Caity Lotz brilliantly to create meaningful comedy in any scene they shared. Behrad, Spooner and Astra as sadistically violent riffs on the original characters was a lot of fun especially when they were betting on how Sara would kill Dr. Petrov. Ava’s cold and calculating duplicitous scientist made for a strong antagonist along with a Gideon bereft of empathy. They’re caricatures of the characters but a lot of fun to watch. All told this sets up a unique team of antagonists that should challenge the original Legends in compelling and entertaining ways. 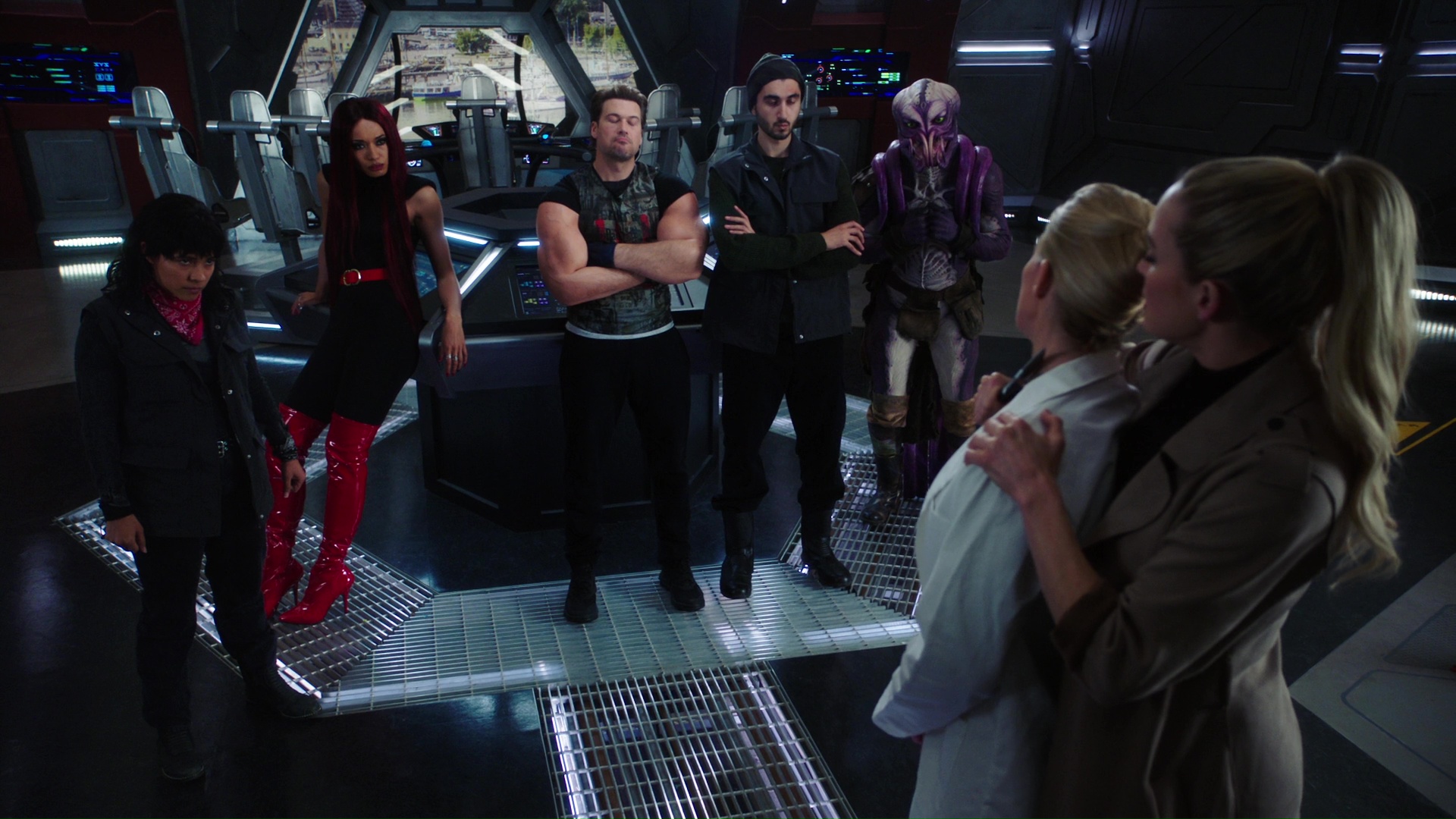 A strong episode that has fun with the dialled up caricature versions of the characters while showcasing Sara’s strength of will. Using Sara as the primary focus to question the narrative being fed to the team worked brilliantly as it makes strong reference to established traits of Sara while giving her a solid arc to follow that plays out naturally. When put under any kind of scrutiny Gideon’s explanations make no sense and Sara’s development over the episode is around understanding the truth of what her life is. Zari also questions it though to a lesser degree which helps Sara understand what’s really going on. She begins to realise that they are creations being manipulated and that the real Legends are trying to make the timeline better. Ultimately she concludes that isn’t a bad thing and works to undermine Gideon. Zari coming back on side when Gideon uses undeniable fact to convince her that the Legends are dangerous was a nice touch and Sara’s resistance to the programming leaves hope for her to find a way to do that again in future.

As fun as the episode was, it doesn’t actually feature the characters the show follows and suffers from shallow characterisation for all but a few. The actors are clearly having a lot of fun playing these dialled up caricatures but there’s no depth to them which makes it difficult to connect to them. It also fails to tap into the obvious questions of identity or existence around these duplicates though that may come later. All told this sets up a unique team of antagonists that should challenge the original Legends in compelling and entertaining ways.