DC’s Legends of Tomorrow heavily references E.T. when the team embark on a mission to save Ray Palmer from being killed in 1988.

When watching this show you have two choices. You can either go with what it has to offer or live in frustration with the silliness that peppers every episode. I suppose there’s a third choice in not watching it at all but where’s the fun in that? 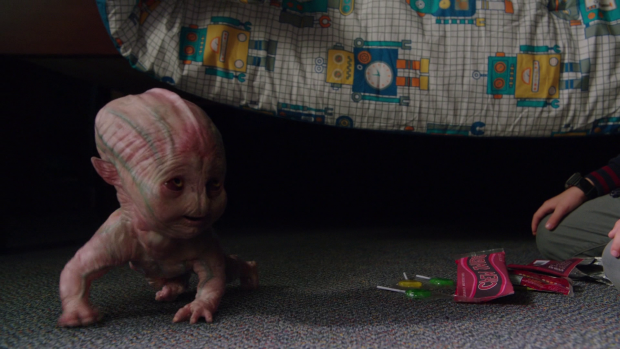 Last season began to realise the potential of this show and lean into the more ludicrous elements in a way that massively worked in its favour. The work done during the season built up enough good faith to establish this show as over the top fun with enough depth to keep it from becoming disposable nonsense. That good faith allows episodes like this to happen and for those willing to come along for the ride.

The story begins when Ray Palmer vanishes during a team building exercise after spontaneously dying in 1988 which makes sense in a time travel show and nowhere else. It’s a good scene because it sets the stage for Zari’s first official mission as part of the team and lets the characters bounce off one another. Of course Ray is the optimistic one leading a team building session to try and make her feel welcome and naturally the rest of the team spend their time belittling them from it. Everyone plays into their established roles on the team wonderfully and Zari immediately makes for an interesting addition when she recites the observations she has made about each of them showing that adjusting to being part of a group will take some time for her as will allowing herself to relax and put her trust in others.

A key observation from Zari that fuels the plot of the episode is that Ray is overwhelmingly optimistic even when facing death. Optimism has always been a defining trait of Ray Palmer so having an episode that explores the root of that thanks to the nifty time travel narrative device. It turns out that Ray was killed as the result of an anachronism in 1988 that is revealed to be a baby Dominator -seen in last year’s crossover– that Ray befriends and takes care of after it is separated from its mother. 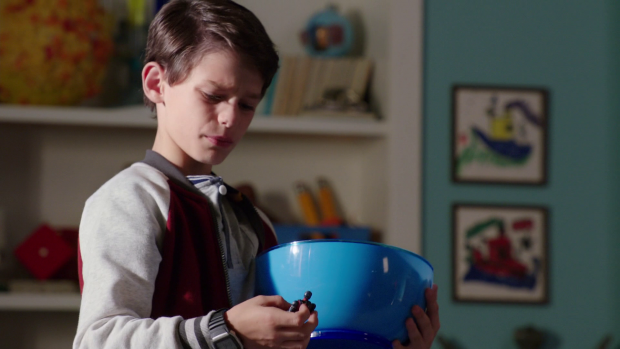 Young Ray (Jack Fisher) is characterised as a lonely and naive child who thinks the kids that bully him are his friends and spends all of his time alone which causes his mother to be concerned about him. Ray -for the purposes of this I’ll refer to the Brandon Routh version as Ray and the younger version as young Ray- is able to take a look at his childhood from a fresh perspective as he is an adult looking into the life that he lived. His memory has it as perfectly idyllic but the reality is that he was an emotionally stunted kid misunderstood for his intelligence. The scene where he praises his teacher for a pop quiz that reinforced the fundamentals was both hilarious and telling of how early in life Ray’s genius level IQ started to manifest. Being a genius is something the show often forgets about him so it’s good to see the origins of that as well.

The relationship Young Ray has with the Domnator that he names Gumball is really adorable. There isn’t as much time as there is in E.T. to establish that relationship but the fact that it moves like a baby and looks like a good mix between cute and creepy goes a long way towards creating the necessary empathy for Gumball. There is also tension added to any scene featuring Young Ray and Gumball after Gideon points out that the baby has all the strength of an adult and can randomly mind control people at will. The implied danger keeps the momentum going and Ray using this opportunity to find himself in a way anchors the plot in something interesting.

As you might expect in a story like this it’s the adults who don’t understand what’s really going on and this plays heavily into the climax of the story. Ray warns his younger self that Gumball is dangerous because he can’t see past the species he belongs to. Young Ray’s connection with Gumball is entirely genuine and he trusts that the young alien won’t hurt him. Ultimately Young Ray is right and Gumball ends up getting them out of trouble when he makes the government agents perform “Good Morning” from Singin’ in the Rain in a perfect pay-off of an earlier adorable scene. 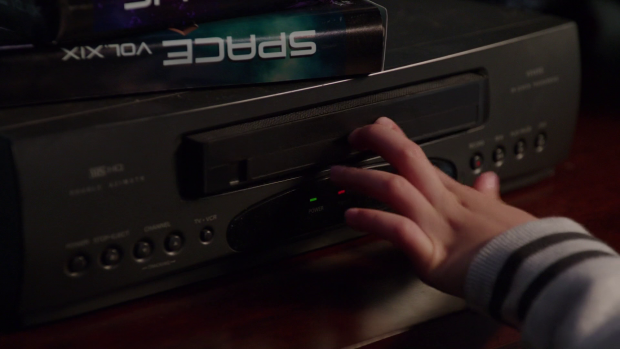 This scene is important for Ray as a character as instead of teaching his younger self that it’s all going to turn out ok her re-learns the lesson of not judging something by its appearance. The Dominator’s outwardly gruesome appearance doesn’t necessarily signify aggression as we learn in this episode through its singular mission to reunite with its child. Young Ray was able to form a bond with Gumball by showing compassion that was returned and Ray clearly takes that lesson to heart when he sees that his younger self is right.

There is also a suggestion that Ray inspires his younger self in some way judging by Young Ray dressing up as the Atom and being joined by the entire team who identify as his friends to get the bullies off his back. It’s a cheesy scene that badly messes with the timeline to a degree that will probably never be explained but there’s no denying the impact of that scene and the comedic sting when Mick steals the candy from the bullies was inspired.

Zari’s being paired with Ray on her first mission works really well as the two characters are very different. She starts off being frustrated with Ray’s peppy attitude and generally irritated by the mission in general but the way she slowly warms to Ray and by extension the team feels organic enough. The way she bonds with Young Ray In some ways she could represent the potential journey of a cynical viewer who starts off being frustrated by the apparent silliness of the episode and ends being completely on board. Whatever form her arc takes Zari continues to be a good character and Tala Ashe blends nicely into the team. The repeated mentions of her dark future are somewhat tedious but it makes sense that she would be affected by it. 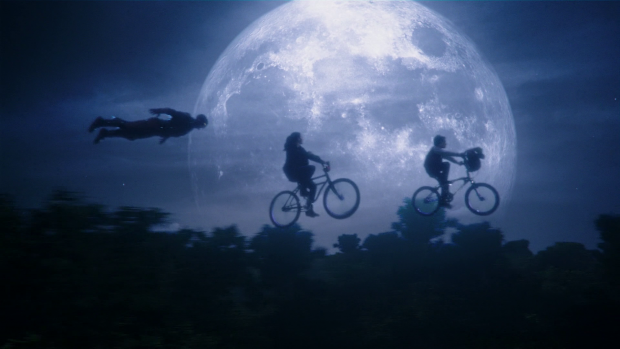 Having her use her powers to recreate the iconic flying bike sequence from E.T. worked beautifully. It made sense for her character to use her abilities in that way and was a great recreation in general. The various E.T. references throughout the episode were well executed for the most part and fit the plot really naturally so there were no instances of a reference feeling forced for the sake of making a reference. There was also an amusing ALIENS reference when Amaya saves Nate from the adult Dominator and a Sean of the Dead reference when Nate throws records at the adult Dominator.

The comedy in this episode was also well executed. Every line Mick had was pure gold as usual and there were plenty of funny moments throughout; all of them grounded in the characters rather than forcing a laugh out of a particular situation with the exception of Nate having the hots for Ray’s mother (Susie Abromeit) but that itself leads to a fun reveal. It makes all the difference and allows this episode to be one of the more memorable this show has ever had.

A subplot involving Martin hiding things from the team unfortunately drags the episode down some. Eventually it is revealed that Lily is about to give birth and Martin has been preparing to make sure that he witnesses it. This doesn’t warrant all of the sneaking around and Martin’s explanation is weak. Showing his commitment to the team by lying about the fact that he has personal priorities doesn’t make any sense as it is well established that the team would understand. This does get the ball rolling on setting up Martin’s exit from the series by Jax asking Ray to help him break up Firestorm. Whether this means we will be treated to a successor for Martin or not remains to be seen but the reason for him leaving has definitely been made clear. 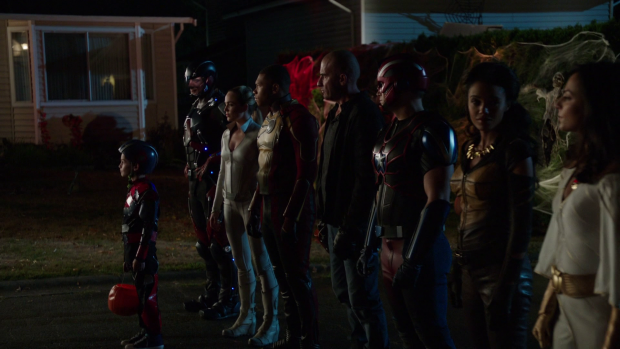 An excellent episode that delivers an affectionate homage to E.T. while allowing Ray to see his formative years from a fresh perspective. The dynamic between him and his younger self works really well and the episode does a good job establishing Young Ray’s connection to the young Dominator in a short time. Their relationship pays off in a wonderfully goofy way that the episode fully commits to. It’s a really funny episode in general with comedy grounded in the characters and several memorable moments throughout.

Zari’s first mission helps endear her as a character and shows her relaxing into her place on the team while learning how to relax somewhat. Using her powers to recreate the iconic flying bike scene from E.T. is an inspired choice. Unfortunately a clumsy subplot involving Martin keeping secrets drags the episode down a little but it does get the ball rolling on his upcoming exit.