“Raiders of the Lost Art”

DC’s Legends of Tomorrow returns from hiatus and brings back Rip Hunter while the Legion of Doom search for the Spear of Destiny.

The question of what happened to Rip Hunter has been hanging over the show since the first episode of the season and the previous episode made it look like he was hiding out in 1967 making movies based on his adventures. This seemed like a really dumb idea so I’m glad he has actually lost his memory and believes that he is a stoner film student native to 1967. It’s also a dumb idea but it’s a little better than that ludicrous cover story. 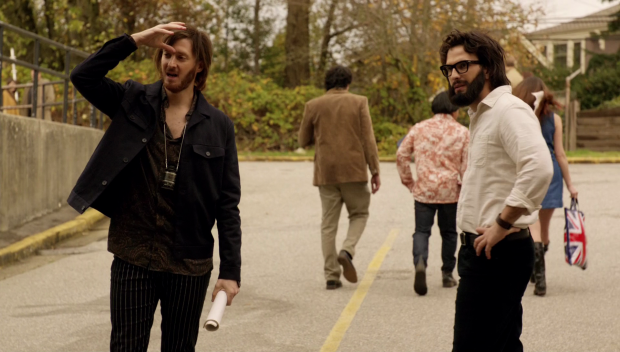 A lot has changed in Rip’s absence with the most notable difference being the fact that Sara is Captain of the Waverider and the team. This role completely suits her so it would be somewhat disappointing if Rip returned and went back to his old role without so much as batting an eyelid. There’s definitely a story in there about command and loyalty that the show is bound to get to in the coming weeks. Of course he has to get away from Eobard Thawne first not to mention regain his identity but I’m sure it’ll happen. I also hope we’ll find out how the two know each other as Thawne makes reference to Rip Hunter back in The Flash season 1 finale “Fast Enough“.

Leaving him in his confused state for the entire episode was a good move as it allowed the plot to move forward without upsetting the team dynamic quite yet. We quickly learn that Rip has a piece of the Spear of Destiny and the team learn pretty soon after in a hilarious bout of self parody. Rip/Phil calls the Spear a McGuffin that motivates the characters and nothing more which makes me think that it isn’t going to turn out to be too big a deal when the plot moves forward.

Either that or the writers are ignorant to how silly this fetch quest really is. It might be somewhat amusing to learn that the writers don’t get their own joke when the plot moves on though it will also be really tragic for us viewers. There is evidence that they understand the references being made especially when we see Rip chewing out the actor playing his Vandal Savage equivalent for lacking menace. This self awareness has to be deliberate so hopefully this will pay off with stronger stories down the line.

For now the Spear represents a desired object for both teams so it’s something for them both to fight over while also doubling as a loose motivation for the Legion of Doom. Like Rip says; a McGuffin. Sadly it’s the only thing motivating the Legion of Doom at this point which is problematic as it’s not a strong motivation. Scenery chewing from Matt Letscher, John Barrowman and Neil McDonough can only take us so far. At some point something will need to be done to beef up their menace or they’ll just feel like massively charismatic Saturday morning cartoon villains. Even the reshaping reality plot is a little too diabolical. All three of these villains have achieved nuance on The Flash and Arrow so I’m hoping this will be brought to this show. 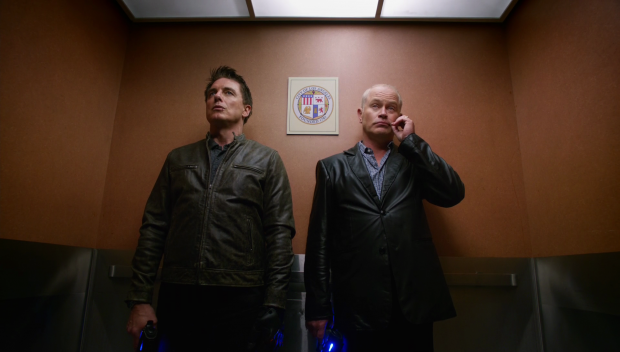 Malcolm and Damien Darhk were really good value in this episode and gave off something of a Terminator vibe as they slowly and relentlessly pursue their targets. They have a few more quips than the Terminator but their threat level felt real enough.

I love that the show is finally calling the trio the Legion of Doom and that the reactions are really varied. Sara thinks it’s ridiculous which fits with her character while Nate and Ray can nerd out over it. The reference to the Hanna-Barbera cartoon Super Friends is somewhat confusing since these character exist in this universe but maybe there’s another cartoon of the same name with different fictional characters in this universe.

This episode gives us a historical celebrity guest star in the form of none other than George Lucas (Matt Angel) and ties him to the characters in a surprisingly effective way. Nate mentions that he would never have become a historian if it weren’t for Raiders of the Lost Ark and Ray would never have become an inventor if it wasn’t for Star Wars. Like so many of us they owe a large part of who they are to the universe that Lucas created so having Lucas decide to quit film school changes them on a fundamental level.

The tension comes from the fact that they are aware of their former selves but the sense of identity is slipping. It’s largely a fun romp but also tells us something about Nate and Ray beyond both being nerds. They have been deeply inspired by the actions of one man and aren’t really able to understand why since it is all slipping away. Amaya’s reaction is nicely handled as well as she can’t understand what all the fuss is about. 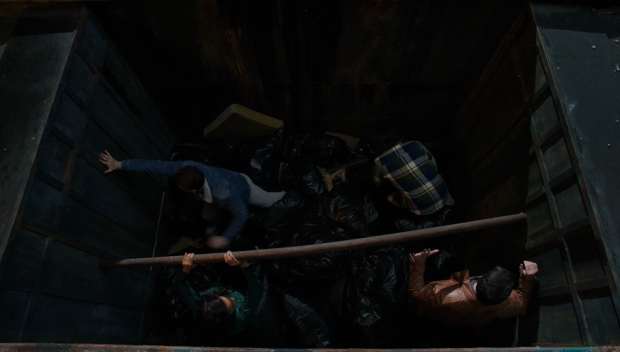 Naturally we get no shortage of Star Wars references with the most notable being Amaya’s riff on the famous “only hope” line and the trash compactor scene heavily reminiscent of the same one in A New Hope. Is it goofy and ridiculous? Absolutely but it’s also kind of endearing. What’s the point in having a time travel show if you don’t have fun with it once in a while? This is largely offset by the fact that Matt Angel’s performance never slips into parody so George Lucas feels like more than his name which really does help.

Mick is still dealing with being haunted by Snart and enlists Martin to help once he stumbles in on Mick talking to himself. This was a really bizarre plot because on one level it’s really compelling on a psychological level watching Mick deal with the sense of loss and his abandonment issues after losing his best friend. On another level Martin is acting far too goofy for this to be taken as seriously as it really should. His casual line about performing brain surgery is funny and all but I would have liked to see the wise and compassionate old man side of Martin that rarely gets to come out.

There is a pseudo scientific reason given for Mick’s hallucinations when Martin suggests that a chip in his brain is picking up signals from Snart being scattered across time and space. It sounds utterly ridiculous and would have been a really contrived way to bring him back. I feared the worst; an extended plot line where the team travel through time collecting pieces of Snart to bring him back. Thankfully this was dispelled and it turns out to be all in Mick’s head. It’s better this way as it gives Mick some powerful emotional issues to work through. So far it is being handled well as Dominic Purcell is able to sell it brilliantly even though he doesn’t interact with Snart directly since we don’t see his hallucination. I’m not ruling out this being Savitar but at the same time I doubt it’ll be him. 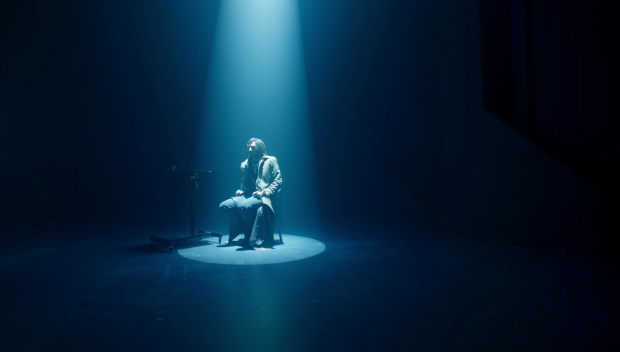 Meanwhile at the Legion of Doom

A fun enough return for the show that puts Rip Hunter back in the show without having him return to his previous role. His belief that he’s a 1960s filmmaker allows the show to make fun of itself in clever ways while suggesting that the Spear of Destiny isn’t as big a deal as it’s being made out to be. The problem with that is the motivation of the Legion of Doom feels flimsy as it is and scenery chewing from the members will only take us so far.

Using George Lucas to give some insight into Nate and Ray was a nice touch and played largely for laughs. The episode doesn’t make light of the impact that Lucas has on nerds everywhere but at the same time the story isn’t all that tense so it balances out as being a fun and insightful romp. Mick dealing with his hallucinations with Martin is very mixed because Mick takes it very seriously and there’s heft to his side of it but Martin’s contributions are played for laughs which doesn’t really fit. I look forward to seeing how this develops.