DC’s Legends of Tomorrow goes back to Feudal Japan and deals with the fallout of Nate’s encounter with the super power serum.

It doesn’t take long at all for Nate’s powers to manifest and his reaction to them reminded me of Barry Allen in the first season of The Flash. He finds the situation really exciting and really wants to explore them to figure out how he can use them to help the team. 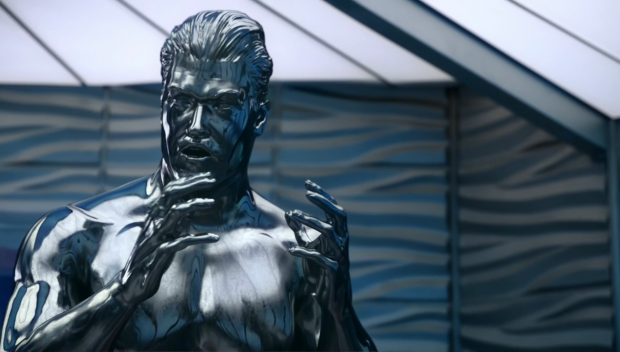 Nate realises he has powers

There’s so much moping in these shows that it’s really refreshing to see characters have some fun with their abilities instead of treating them like some kind of curse. There’s room for that of course but superhero adaptations fall back on this trope too often.

Nate suddenly having powers ties into the reveal of him being haemophiliac last week. He mentions that he spent most of his life hiding from danger as a simple cut could kill him. Learning about history was how he compensated for the lack of actual adventure in his life. Travelling through time with the Legends allows him to combine his desire for adventure with his love of history and having powers is an extension of that. Now he can go into dangerous situations without being afraid of injury.

These are all solid ideas that develop Nate’s character in fairly logical ways but some of the execution of this is a little bit off. The training sequence was fairly painful to watch and it escalates to a ridiculous level fairly quickly when Nate accidentally causes damage to the ship before falling out and landing in Feudal Japan. The visual effects for his steel skin are a little ropey to look at as well. They do the job but I’ve seen better on the DC shows.

It’s not as simple as Nate being a fully fledged superhero right away as he doesn’t know how to activate his abilities for a while. It’s basically a manifestation of his self doubt and could be tied to him feeling like he wouldn’t be able to measure up to his grandfather. Whatever the reason is, this thread doesn’t amount to anything all that interesting other than him suddenly learning how to control his powers at the end of the episode. The main problem is that the trigger for his transformation was unknown and the question of what it actually is doesn’t really get answered. It’s clumsily handled and doesn’t have the pay-off it should. 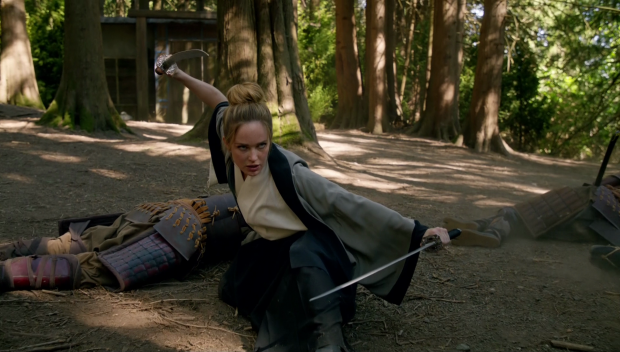 Sara immerses herself in the time period

Using Ray to train him is as good an idea as any since it was his alterations to the serum that granted Nate his powers. Ray doesn’t quite feel qualified to do this and he has a point but decides to try anyway. I like that his arrogance led him to assume that the trigger had been discovered right away without any further work needed. Ray does tend to jump the gun quite a bit so it’s good to see this trait sticking with him.

Ray’s arc this week was the strongest. I mentioned last week that his inferiority complex was really out of place at this point and I stand by that in terms of how that episode handled it. This episode takes a different approach and it’s one that happens to work very well. Ray ties his entire usefulness to his suit. It’s a marvel of technology and it’s something he worked very hard to develop across several years. It does malfunction a lot but he keeps improving it and learning from his mistakes.

This episode asks the question of what becomes of Ray Palmer without the suit. When the Shogun Tokugawa Iemitsu (Stephen Oyoung) takes his suit it forces Ray to consider what he is without it and his conclusions aren’t positive. He gives Nate a speech about what it took for him to create it which tells us exactly what it means to him. Ray says that it is everything he has and now he is faced with having to destroy it to keep it out of the hands of the Shogun. It’s a lot for him to deal with and he is now faced with his usefulness coming to an end. A lesser episode would have him almost destroy it but end the episode with it returned.

This doesn’t happen and the suit is completely destroyed. Ray doesn’t have any means of helping the Legends at this point and it should be interesting to see how that affects him. Of course I imagine he will rebuild the suit better than ever but for now there is real potential in this storytelling. 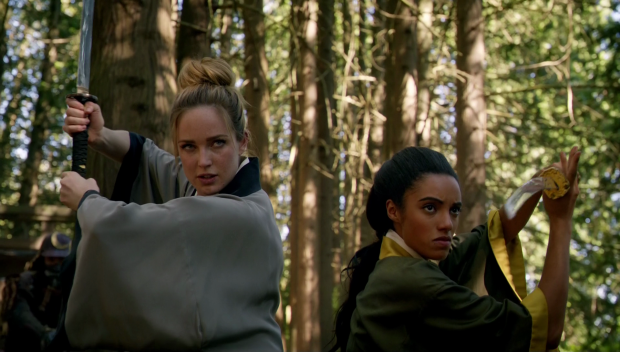 Ray does learn that there is more to him than his technology. Ultimately it’s his knowledge of his suit that allows him to defeat it and he learns that he is capable of so much more than he initially thought. The way he learns is a bit heavy handed but Brandon Routh really makes it work.

Amaya aka Vixen infiltrates the Waverider to avenge the death of Rex Tyler. His last words to her were “time traveller” so she naturally goes after the only time travellers she knows of to get answers. Her attack on the team is impressively systematic with none of them knowing what hit them. Mick is her target as she assumes he is the one who killed Rex. I’m not entirely sure why but Mick doesn’t really do much to dissuade her.

If this is the start of Amaya joining the team full time then I am all for it as she fits in really well. Her back and forth with Mick is really entertaining and her relationship with Sara is well developed so far. They develop a mutual respect for one another and bond over being warriors. It’s a really engaging dynamic and Amaya shifts from vengeful anger to a camaraderie as the episode progresses.

Sara had settled into her leadership role naturally and proves herself to be up to the challenge throughout. We see a lot of her telling people what to do but she also throws herself into battle at the first opportunity. Seeing her take on several Samurai and defeat them effortlessly was great and I liked the use of her League of Assassin’s training to defeat the last one. 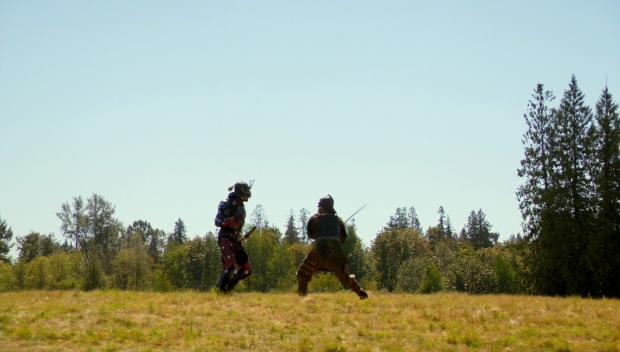 Ray proves that the suit doesn’t make him

Mick didn’t have much of an arc this episode but he was a lot of fun nonetheless. His obsession with proving Ninjas exist was a source of lots of comedy and eventually accomplishing it while taking on a group of Ninjas was excellent. Dominic Purcell is always great at line delivery and gets to really show off here.

Jax and Martin are exploring the mystery angle of the episode. They discover a hidden compartment on the Waverider where Rip was hiding an arsenal of heavy duty weaponry. As if that wasn’t mysterious enough they hear a recording from a future version of Barry Allen who doesn’t want Rip’s team knowing what he has to say. On the surface it seems intriguing but I’m not entirely sure it will go anywhere interesting. I do like that Jax and Martin are talking about it as if they know what they’re talking about as it makes the dialogue feel more natural but at the same time it goes against the team depending on each other. These reveals are rarely satisfying so I’m managing my expectations. I imagine it will have something to do with the upcoming crossover.

This was a very nice looking episode. Lots of it was outside so it was a great opportunity to get a good look at exactly what was going on. My exposure to Samurai films and TV shows is limited but I didn’t find it overly disrespectful when it came to the homages to these sorts of things. The episode is somewhat reminiscent of last season’s “The Magnificent Eight” in the sense that it’s set in a popular historical period and the rough plot is the same but it doesn’t feel like a repeat and has lots of meaningful character work as well as excellent action so comes off much better. 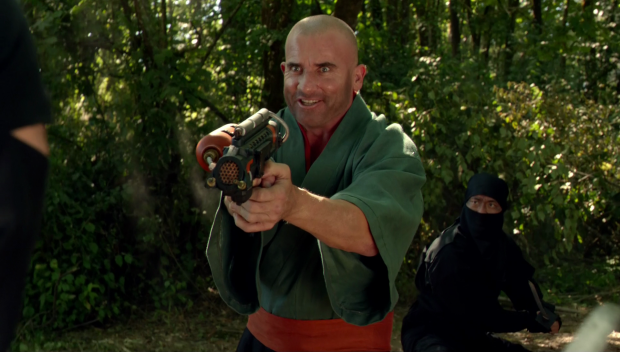 A fun episode that juggles the characters well and has some meaningful development for Ray and Nate. The loss of Ray’s suit has fascinating implications for the next few episodes until he inevitably builds another one but it has a lot of weight here as he questions his overall usefulness. Nate getting used to having powers and struggling to find the trigger is something that doesn’t pan out all that well as it feels like the answer to the reason he can’t control his abilities is never answered.

Amaya is a great addition to the team and mixes well with both Sara and Mick for different reasons. Her transition from rage to camaraderie feels natural. Sara is showing off her ability to lead as well as her impressive fighting prowess and it’s a good fit for her character. Jax and Martin discovering a message from future Barry is interesting on the surface but may not go anywhere interesting. Despite its flaws it’s a nice looking episode with great action and some meaningful character development.