“Tender is the Nate”

DC’s Legends of Tomorrow takes the team to 1920s Paris to hunt down a Minotaur and justify their spending to Nate’s father.

In the criminally underrated 2010 movie The A-Team, that particular team are described as being the best and specialising in the ridiculous. That description could easily be applied to the Legends to the point that it has basically become the mission statement of the show as well as the team. The team have embraced the lunacy that is now their lives just as the audience have but it seems that the biggest threat to their continued existence is government oversight and budget concerns. 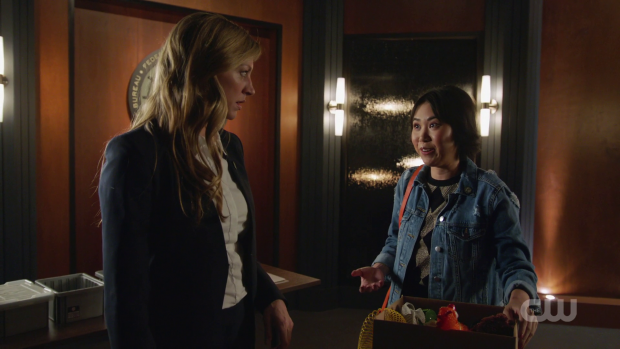 First day jitters on both sides

Hank Heywood is still looking to justify the massive cost of the Time Bureau and the Legends are a significant drain on financial resources. I’m not entirely convinced by every item on the list such as the period clothing as it has been well established that the Waverider can create whatever is needed for a mission. Surely as long as the Waverider has power then there is no real cost associated with producing things like clothes or food. Pushing that aside this is basically an excuse to bring Hank along on a mission and create another opportunity to explore Nate’s changeable relationship with his father.

Investment in this plot will entirely depend on how you have responded to the ongoing Heywood family drama so far. Personally I’m not a fan so this really started to grate on me mostly because Nate isn’t a character I find all that appealing and his relationship with Hank seems to follow similar beats week on week. Once again Nate wants to show Hank that his choices have made him into someone he is comfortable being and Hank judges him unfairly based on his own standards. By the end of the episode they reach a sort of mutual understanding and I guess the process will repeat in subsequent episodes in a different setting.

The real difference here is that Hank gets to experience travelling through time and interacting with historical celebrities. He gets to meet Ernest Hemingway (Andrew Lees); one of his personal heroes and have a drink with him so he starts to see the fun side of time travel even though his mentality is fairly bureaucratic when it comes to evaluating the effectiveness of the Legends under their current spending. It comes to a fairly predictable conclusion as I’ve noted above though there is fun to be had in having someone enjoy the fun side of time travel for the first time. I am slightly disappointed that the writers didn’t capitalise on the multitude of opportunities to reference Biff from Back to the Future though maybe the plan is to drop these gradually throughout the season. 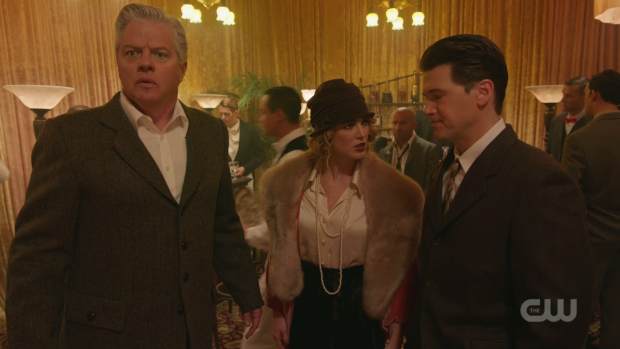 Hank experiences the past

There are some smaller details that make the  Hank/Nate relationship feel more worthwhile. Hank is really impressed when Nate “steels up” in an attempt to fight the Minotaur and seems disappointed when that isn’t effective. Similarly Nate is impressed when Hank picks up a guitar to subdue it through song. These are very small details but they say so much about what each of them would like from the father/son relationship and aren’t getting. Considering nothing profound happened in terms of establishing common ground it’s clear that this will continue on into subsequent episodes. As a side note, Matt Ryan is the king of expressions when it comes to showing John’s reaction to this and Tom Wilson definitely has some pipes.

As an excuse for family drama I find the budget concerns to be fairly weak as I struggle to get my head around the fact that the Legends are part of any organisation. The difficult first season was focused on rebelling against the Time Masters and season 2 established that the Time Bureau were less than impressed with their antics but grudgingly let them continue on because of the results they achieve. Now that Sara and Ava are in a relationship there seems to be a more formal alignment which doesn’t match up with the swashbuckling renegades that made the show so appealing up until now. This doesn’t break the show by any means an there is some comedy to be mined from the fact that very few of them take this seriously such as Mick scoffing at the notion of “work”.

I understand the need for formalising their alignment as it allows Ava and Sara’s relationship to be stable since there is no conflict between what the Time Bureau’s agenda is and how Sara leads her team but the problem with this arrangement is that there is a lot of time wasted with plots like this that feel somewhat disposable. 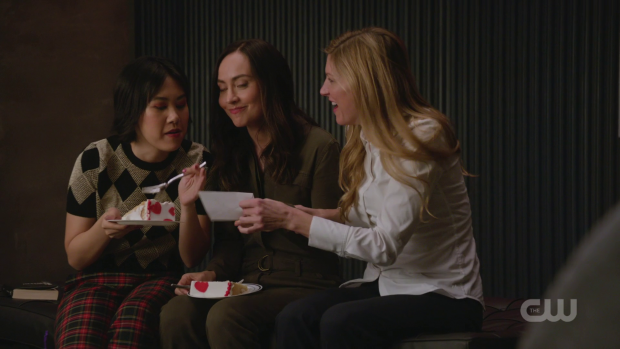 Nate back on the Waverider was meant to exist as a reminder of “old times” and that definitely happens though all it really served to highlight to me personally is that I don’t really miss him when he isn’t around. He makes a speech about finding his place and knowing he has a family that he can happily come back to so the point of this is to show that Nate is in a good place at the moment though I’m not sure it needed to be addressed as I barely got the impression that he was having a personal crisis of any kind. Thankfully he gets to meet Charlie without any unnecessary angst; instead it is mined for the comedy which was absolutely the right way to approach this though I could have done without the sitcom style attempts to keep him away from the lab.

Mona’s first week as the Creature Handler at the Time Bureau is another plot that leans into the comedic elements though there is a lot to unpack from what happens. The first thing is how she differs from Ava in her viewpoint on how the captive creatures should be treated. Ava thinks they are prisoners and don’t deserve any comforts but Mona sees them in a more sympathetic light and wants to make their stay more bearable. This furthers the notion that Ava often actively ignores her feelings and categorising the creatures in the containment facility is one of the ways she does that. Mona is a great foil for Ava as is very expressive which puts them at odds with one another in the beginning. Ava even threatens to terminate her employment at one point which makes for an overcompensation on her part as well as an overreaction to a mistake.

Bringing Nora into these interactions proves to be a great idea as she offers a unique perspective on various issues. Mona talks about having becoming a Lawyer as her fallback if Creature Handling doesn’t work out. Ava can’t fathom why Nora would run away from that opportunity even though Nora clearly wouldn’t be happy in that environment. She makes it clear that it’s the life her parents want for her which is something Nora knows a lot about. She was raised by a cult to be a vessel for a Demon because her father wanted that for her so her feelings on following what parents we r for their children are very strong. 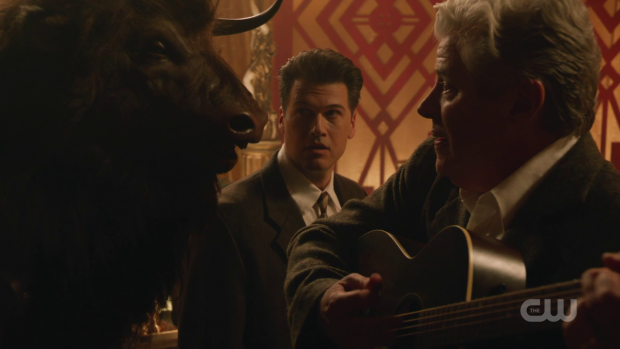 There’s a lot of pain and regret in how Nora describes her life as well as a great deal of self loathing for what she has been involved in. Mona offers an optimistic outlook on this by pointing out that she came out the other side of all that and can forge her own path; something that hadn’t really occurred to Nora up until this point. This is where Mona proves how important she can be to this character dynamic at least as she has a way of making people reframe their own thought processes to see something different. I also liked that the three women trapped inside a cell basically took the form of a slumber party which included telling secrets, talking about boys and having a crush show up to gatecrash. This may lean into the clichés but when these three actors are involved in the plot it works because they bounce off each other so well.

This adds to the possibility of redemption for Nora because she is shown to be tortured and lonely. A relationship with Ray looks both possible and likely and it’s clear that she values his faith in her to the degree that she willingly lets herself be locked up so that she can be punished for everything she’s done. It may be impossible to truly make up for her actions but it’s clear that she’s interested in being a better person from this point on and Ray serves as inspiration for her to really try that. I like the way their relationship is progressing and look forward to seeing what the writers can come up with in terms of where to take it. 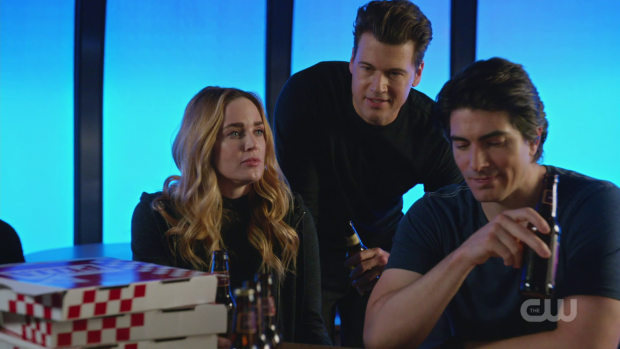 An uneven episode that continues to develop a plot that hasn’t been all that interesting so far but makes great use of a fun new character. Nate and Hank’s relationship has largely failed to interest me up until this point because each episode follows broadly the same beats before restoring them to a point of understanding that had apparently already been achieved. Adding Hank to a typical Legends mission is a lot of fun in some ways though strangely justified as an exercise in finding out if they’re worth the amount of money they apparently cost the Time Bureau. This detail flies in the face of the Legends being swashbuckling renegades in order to allow Sara and Ava’s relationship to not be impacted by the Legends defying the Time Bureau. It’s not game breaking at this point but it could get there. Nate being back on the Waverider is meant to serve as a reminder of “old times” and it does that though it also serves as a reminder of how little the character is missed being deployed elsewhere.

Mona’s first week as Creature Handler is really entertaining. Her effervescence makes for a good foil to Ava and I liked the exploration of how they both view the captive monsters. Adding Nora to their interactions is a lot of fun even if it does lean on slumber party clichés. This is somewhat mitigated by strong acting and really fun conversations. Mona also demonstrates her worth by helping Nora see herself in a different light that might make her feel as if redemption is within her grasp somewhere down the line. Nora blends into the dynamic really well and her relationship with Ray is being developed nicely.