DC’s Legends of Tomorrow heads to the roaring 20s when Reverse Flash and Damien Darhk create more problems to achieve their goals.

One thing that separates this season from last season is that Reverse Flash and Damien Darhk are several orders of magnitude better than Vandal Savage ever was. This episode proves that in spades with Neil McDonough’s unique brand of scenery chewing and the threat that Eobard Thawne represents with his abilities. Matt Letscher has really started to make his version of the character his own and he feels distinct from Tom Cavanagh which is definitely a good thing. 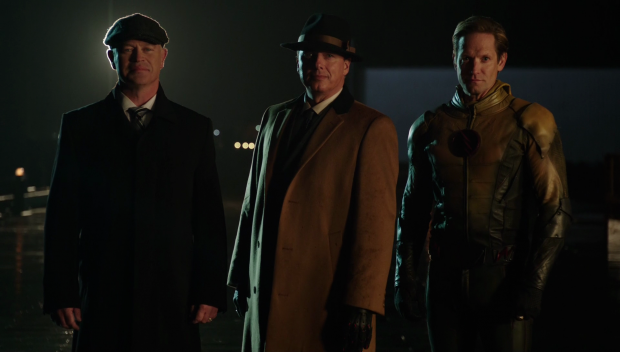 The Legion of Doom are snappy dressers

The Legion of Doom -not actually referred to as this yet- has a new member in the form of John Barrowman’s Malcolm Merlyn and he’s a welcome addition. John Barrowman has always been an asset to this universe and he proves that here with his effortless charisma and ability to appear sinister when the occasion calls for it. His motivations are also clear and easy to understand since he is allying himself with Darhk and Thawne so that time can be manipulated to create a more favourable outcome for him and his family. It’s a very self serving thing that motivates him but it’s consistent with the character and makes a lot of sense.

When seen together they are a really fun group with each of them bringing something to the table in terms of their own particular brand of villainy. Thawne and Darhk revel in being evil where Malcolm likes to think he has a nobler purpose. They can all chew the scenery and the grouping is great to watch. There are hints that it is an alliance of convenience so maybe we will see some infighting in the coming episodes.

Their plan doesn’t really feel all that structured. We learn that they want to get a hold of an amulet because it will allow them to find the spear of destiny which then allows them to shape reality itself. It’s a standard quest to find a McGuffin which is fine but the time periods they visit and their actions seem to be completely random. They must have information we don’t see but they must also be aware of the team that are investigating inconsistencies in the timeline so making dramatic changes to history when searching for the artifacts doesn’t really make much sense. In this case it would have made sense for them to want to attract the Legends since they have the other part of the amulet but it was never explicitly stated as a reason.

The Legion of Doom are definitely a formidable threat to the team as shown in this episode. Malcolm has received the same training as Sara so can offer a challenge to her in combat and Reverse Flash is more powerful than anyone on the team so is a significant threat when they have to deal with him. Not having a Speedster on the team means they can’t hope to match him and that comes across really well. 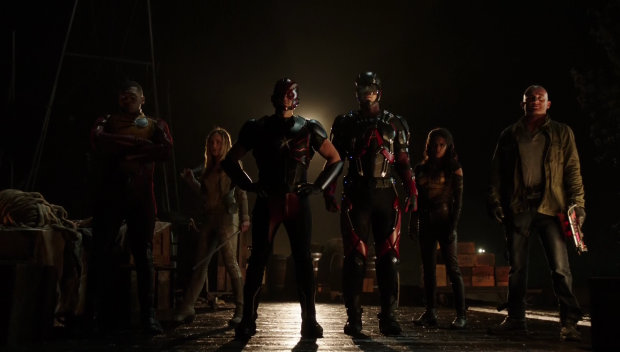 I do love a group shot

Not that their helpless against them as they have a weapon designed to slow down a Speedster that only affects Thawne temporarily. I wonder why there was no mention of Ray’s nanotechnology as that seemed to be useful back in The Flash episode “Rogue Air”.

The sequence on the Waverider where Thawne was running around searching for the amulet was really well done. As I mentioned he is a very formidable threat but the team also did a capable job against him. I wonder if they will recruit a Speedster to help with him at some point or if some other solution will present itself.

Thawne disguising himself as Martin was a nice touch as well though I wonder why he altered the device so that it doesn’t kill other than Martin not being written out of the show. Martin was used as a bargaining chip by Malcolm to get Sara to give up the amulet but that didn’t really seem like it was the plan either. The villain plans do need to be better developed so that their actions don’t seem random.

The disguise subplot does help Sara realise that she’s starting to see the crew as family which turns out to be important because Martin’s secret daughter becomes known. At first Sara is horrified that Martin would create a time aberration and then hide it from her especially when he was the one that convinced her not to go back in time to save Laurel. It really stings on a personal level that Martin wouldn’t hold himself to that same standard. 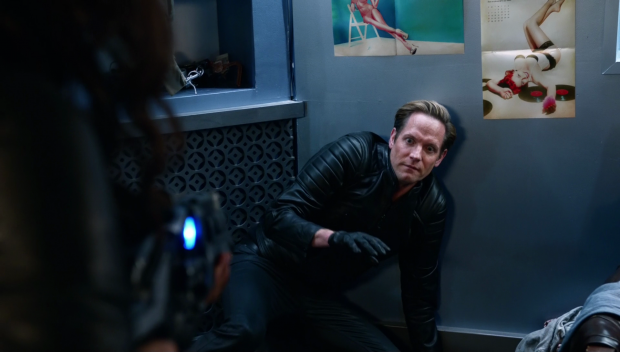 Thawne isn’t as invincible as he thinks he is

Martin makes a really emotional appeal for Lily’s existence by talking about all of the memories he has of her. Sara is adamant that the memories aren’t real because this isn’t a life that he has lived and Martin knows this on a rational level but they also feel real and Victor Garber does an excellent job of conveying the internal struggle that is going on within Martin. He wants nothing more than for Lily to continue existing even though he knows he has technically never been part of her life.

Sara eventually comes around to the idea once she realises that Martin is like family to her so by extension Lily is as well. It works because the actors sell this connection but it feels like it has been resolved a little too easily considering that a major plotline during the crossover was people being annoyed at Barry for changing the timeline for selfish reasons. After disapproving of Barry for doing that she seems far too quick to accept Martin’s reasons.

After her experience of living the “perfect” life back in the crossover, Sara seems more at peace with herself. Part of that is accepting that her team are also her family but another part of that is how easily she turns down Malcolm’s offer to make a more favourable timeline for her. She has already experienced what that might be like but recognises that she is needed more where she is and can do the most good. Interestingly she does admit that she was tempted but that doesn’t affect her decision as she is sure that she is in the right position.

Mick and Amaya continue to be a compelling pair and the growing romantic connection between them is actually working really well. They are very different people which seems to be part of the attraction and this is enhanced by Amaya’s clear desire to bring out the best in him. 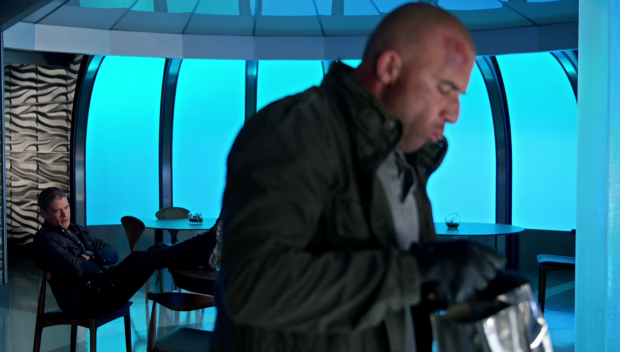 Mick tries to silence the voice in his head

Mick is also struggling with becoming a better person as represented by his hallucination of Snart. The hallucination continually berates him for trying to be a good person and insists that it isn’t who he really is. If Snart is just Mick’s subconscious trying to make sense of how he currently feels then this is a really effective way to explore it. It’s also possible that this is Savitar trying to break Mick in order to manipulate him. Based on the events of the recent episode of The Flash that would actually make a lot of sense but it is more interesting if it represents the internal conflict that Mick is struggling with.

He can’t change completely because that’s no fun so his criminal side is still fully embraced in everything he does. Behaving like criminals helps the team to succeed but the episode doesn’t really go as far as it could with this idea. In particular Amaya is supposed to learn that sometimes the wrong thing can be done for the right reason but this is only represented by her stealing a bottle of booze from a warehouse. This would have been far more powerful if she had to do something very immoral in order to prove that she could be trusted by the Chicago gangsters. I don’t get the impression that she understands the appeal of criminality even though she says that she does.

Despite this, I am really enjoying seeing these characters together and seeing their relationship develop is something that I am interested in. It could be that the flirtation is the only interesting thing about it as is often the case but we shall see how that develops.

Another fun pairing is Nate and Ray. I like that they behave really childishly around one another with a constant need to one up the other. If overplayed it could become annoying but for now it’s just the right amount. When things become serious they can put their squabbling aside and get on with the work but until they they take little jabs at one another that amuse me. 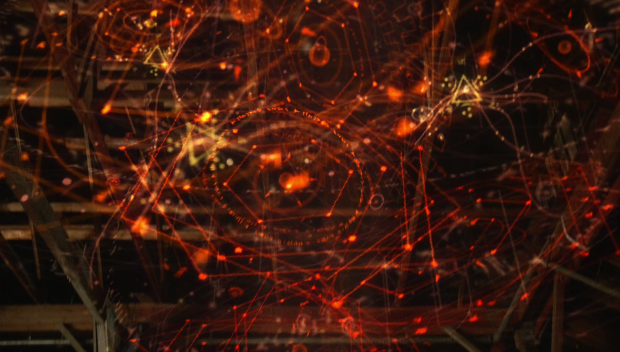 What does this mean?

The time period of the 20s was good fun as well but felt a little disposable. Important figures like Al Capone (Isaac Keoughan) and Elliot Ness (Cole Vigue) were essentially caricatures of their historical selves. Seeing the Legends team dressed in period specific clothing was all well and good but there was very little to distinguish this from any other time period from a story point of view. It feels like window dressing for everything else that is going on. It might have something to do with being able to return to the Waverider any time they want limiting the stakes of having to deal with the time period. Whatever the problem is, the time periods should really be a significant part of the story.

Rip Hunter returns in the cliffhanger ending. I’ll confess that I haven’t really missed him but his reintroduction was memorable enough. It remains to be seen if he’s suffering from temporal amnesia or if he’s undercover but the fact that he’s making terrible looking films seemingly based on his own life is really amusing and a great way to move into the break. We’ll find out what Rip has been up to in January.

A solid episode that shows the Legion of Doom to be formidable villains who also happen to be a lot of fun. Now that Malcolm Merlyn is on the team there is no small amount of scenery chewing and it’s great to see. I do think that there plans could be better developed as they seem really random but they’re a massive step up from Vandal Savage. Martin’s issue about his newly created daughter is handled really well here with Sara having to come around to accepting it. Her acceptance feels rushed but the sentiment is well acted by Caity Lotz and Victor Garber so it works on some level.

Mick and Amaya’s relationship is a lot of fun to watch but more could have been made of Amaya coming to understand the criminal mind than we got here. It’s possible that their flirtation is the most interesting thing about them but we shall see. Mick being haunted by a hallucination of Snart who tries to convince him that he’s unable to change is really well handled as it shows the internal conflict going on for Mick in a really creative way.

One major flaw the series has as a whole is that the time periods don’t feel all that significant to the story. They tend to be fun but they are very disposable and the roaring 20s is the latest example of that. This show is on a break now but the ending showing Rip Hunter as a film director is a really memorable cliffhanger and I look forward to seeing how this plays our in January. 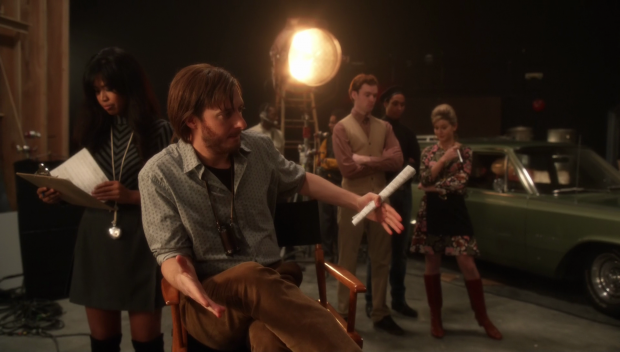