“The Curse of the Earth Totem”

DC’s Legends of Tomorrow heads to the Bahamas in 1717 on a mission to retrieve the Earth Totem from the notorious Pirate, Blackbeard.

I’ll start this off by saying that I am not a fan of Pirates. It’s not something I can easily rationalise but they just don’t interest me so this episode immediately has an uphill climb towards enjoyment for me personally. Fortunately this show manages to take pretty much anything and make it fun. 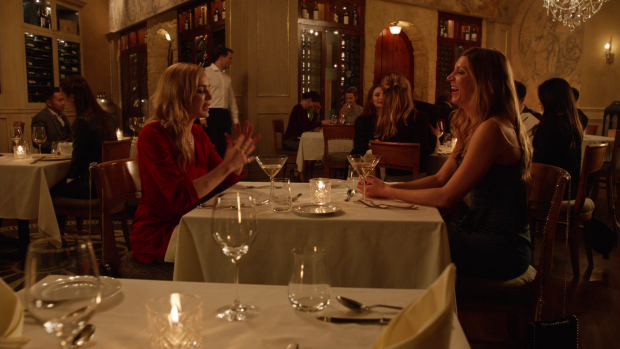 It probably helps that the episode is relatively light on Pirate tropes to the degree that the time period is largely irrelevant beyond a few gags here and there and having some of the characters hang around in Pirate themed drag. Naturally the Legends meet Blackbeard (Jonathan Cake) but even he doesn’t have much bearing on the plot other than pointing the team in the direction of their objective and being used as fodder for jokes. Jonathan Cake does a fine job and characterising Blackbeard as a self serving coward coasting by on a brutal reputation that he can’t back up is amusing enough even if the rug pull happens too many times. The episode gets away with revealing that the team are in no danger from him the first time but subsequent examples don’t work because the joke has already been deployed and it’s expected.

The focus of the episode is the interweaving narratives that members of the team are experiencing. Finding the Earth Totem is arguably the main plot though it doesn’t feel that it is taking time away from the others so the writers have managed to find the right balance allowing every member of the team to shine. Amaya takes point in the search for the Totem mostly because of her connection to that side of the mythology. More significantly than that is the development of the weight of responsibility resting on her. She is tempted to change the past to make her granddaughter less villainous and doesn’t feel any strong desire to return to the life that she is supposed to have even though not doing so would have far reaching consequences for the timeline. This starts to set up Amaya’s end game as she realises that she will eventually have to return to where she came from and that she has no future with Nate as a result.

Her conversation with Mick helps her resolve her feelings for now because she tells her exactly what she wants to hear. Amaya sees him as impartial and Mick’s advice is about as neutral as it can gets; he listens to her arguments and encourages her to do both of them before pointing out that Pirates lived for the moment and for now it’s worth giving it a try. She takes this to heart and lets herself indulge in the fantasy of Captain Jiwe to really entertaining effect. Maisie Richardson-Sellers clearly has a blast putting on her Pirate voice and barking commands at people. It lets the audience see a different side of Amaya and staves off difficult decisions for a while longer. 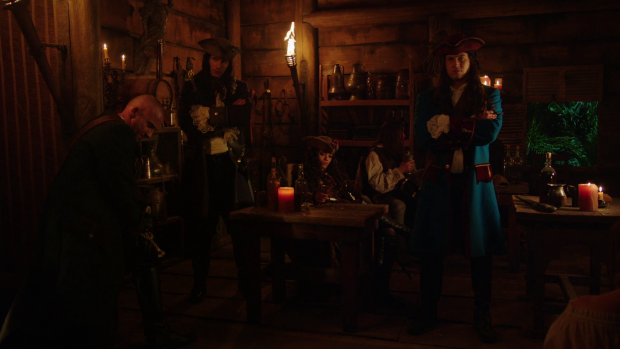 Strong characterisation like this saves this from being yet another McGuffin hunt as is common in shows like this. Last season it was pieces of the Spear of Destiny and this season the team are after Anansi Totems. Narratively they boil down to the same thing so the characters have to pick up the slack and make the journey worthwhile.

Sara and Ava finally act on their obvious chemistry and decide to attempt a normal date. It starts off awkward before the pair become comfortable with one another and ends with their responsibilities getting in the way. In other words, exactly what would be expected from these characters going on a date. Once again the predictable scenario is undercut by great characterisation and compelling performances. Jes Macallan and Caity Lotz are a joy to watch together and it’s great to see Sara relax a little since the responsibility of command often has her would very tightly as she is looking out for the good of the team. Little anecdotes such as Sara playing Peter Pan on stage and being terrified help to humanise her while serving as a reminder that she had a life before becoming an assassin. The progression of this relationship feels natural and watching it unfold is entertaining as well as endearing.

Their argument was great to see as well because it shows how passionate they are when around one another. It’s an important step forward because they both realise that neither of them are really interested in normality and they are able to move on from there. The way they compliment each other when fighting against Pirates is excellent and the progression of their relationship after that point puts them in a really interesting place for the coming episodes though I’m now concerned that Ava is a target for a dramatic death considering Sara’s less than stellar track record with relationships. I would like this to be different as there is a lot of mileage to seeing Sara pursue a monogamous relationship where conflicting responsibilities are likely to get in the way rather than having more tragic angst. 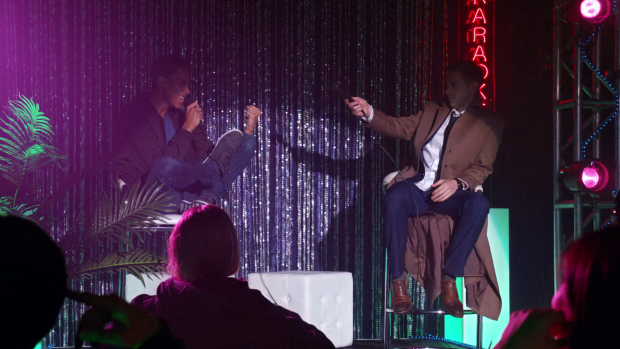 Rip and Wally show what they can do

Wally West gets his first proper showcase thanks to hanging out with Rip Hunter. The fact that Wally already feels at home on this show within the confines of a single episode is a testament to the talented writers that work on this show. They already balance silliness with acceptable stakes to make a show that is fun but never disposable and they do more with Wally West here than The Flash has ever done. It has been made abundantly clear that nobody working on that show had any idea what to do with Wally and the character was stuck in a rut as a result. In this episode he has a subplot devoted to exploring his emotional state and moving him onto the next phase of his development.

Everything that I had pointed out in various reviews of The Flash is addressed here such as Wally being all but ignored by his former team and not having a defined place on it. Wally takes on the voice of the audience here and uses those missteps to fuel his motivation. He is still getting over Jesse which admittedly doesn’t work because no time was spent developing their relationship but it is one of a selection of issues that he has to deal with and his approach is to distance himself from his problems while using meditation to solve them.

Rip Hunter is there to tell him that his approach is incorrect and they have a really entertaining team up that is more about them connecting as characters than solving any particular problem. It’s refreshing to see a character plot in a superhero show not focus on defeating a villain and it shows real confidence to expect the audience to invest in two guys doing little more than getting drunk and singing karaoke. It’s fun, progresses the characters and allows Wally an introduction that showcases his personality while making a case for him being a good addition to the show. Rip even points out that the Legends are where misfits go to become something more which acts as something of a meta commentary on the show itself. 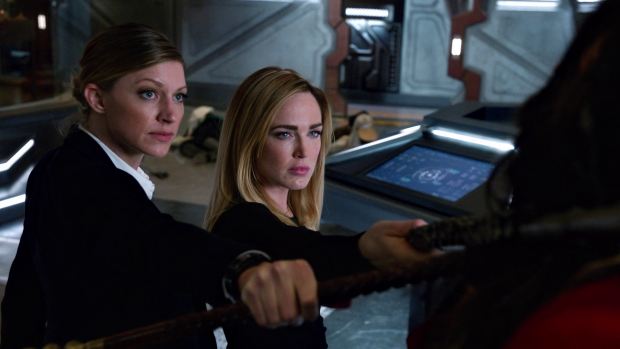 What they do best

It took less time than I thought to circle back to Ray’s connection with Nora. It began when she was a child so is arguably still significant to her even if she chooses to ignore it. That isn’t something the episode plays with because it’s more about Ray being distracted by his connection to her. He shoots her with the Nanite Gun which slowly kills her and he feels guilty about that. Ray’s the sort of guy who would feel guilty about condemning anyone to death but Brandon Routh’s performance and the dialogue makes it clear that he is specifically guilty about bringing harm to that innocent little girl he made a connection with. As such he offers to cure her in exchange for the return of Amaya’s totem. Nora takes advantage of Ray’s emotional weakness and it results in his capture which provides the opportunity for Ray to attempt to get through to her. I suspect this will be one thing that the next episode concentrates on which should be interesting as there is a complex relationship at play here that has a lot of potential.

Another great thing about this part of the plot is Damien Darhk’s reaction to Nora being shot. Darhk is a charismatic, scenery chewing villain but what sets him apart beyond Neil McDonough owning the role is the depth that the character has. His reaction to Nora being near death is brilliantly played as he goes from fearsome villain to helpless father instantly. Despite all his power there’s nothing he can do to save his daughter and that clearly tears him apart. Showing him carelessly toss Amaya’s totem at Ray in exchange for Nora’s life clearly shows where his personal priorities lie and offers a potential exploitable weakness in the coming episodes. Also striking is how quickly he reverts back to being confident and charismatic when Nora recovers and Ray is captured. I’m glad that this show continues to make Damien Darhk interesting despite the potential to overuse him. 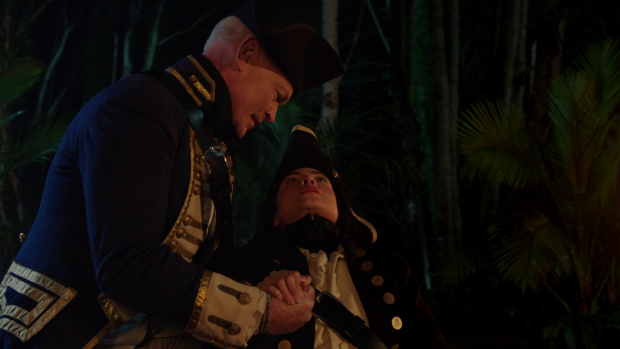 Damien Darhk focuses on his priority

An excellent episode that juggles multiple character stories effortlessly. The Pirate story is arguably fairly dull and derivative but is saved by using it as a showcase for Amaya as a character who learns to live in the moment and put off living up to her responsibilities for a while longer. Blackbeard as a presence was amusing enough but also largely ineffectual in the plot with too many rug pulls. Sara and Ava’s date is entertaining to watch and lets another side of Sara be explored before establishing that they have complimentary views on a normal life. They make for a great pair and I hope this relationship is explored rather than coming to a tragic end.

Damien Darhk has some great moments thanks to Ray’s connection to his daughter. Seeing him go from fearsome villain to helpless father instantly is remarkable and the swift return to confidence once the tables are turned is well done. This makes good use of Ray’s connection to Nora and plants the seed to explore Nora’s connection to him now that he has been captured. The showcase of Wally in this episode is great fun and develops his character while proving how great a fit he is for this show. Teaming up with Rip Hunter to do normal things like get drunk and sing karaoke is an inspired choice and it’s clear that he’ll be a great addition to the cast.