DC’s Legends of Tomorrow has the team drawn into a high stakes bowling tournament with the fate of the world hanging in the balance.

By this point building an episode around having to win a bowling team to save the world shouldn’t even crack the top 10 list of lunacy that this show provides. As always it’s an excuse to have fun and a reason for characters to learn new lessons or have prior ones reinforced in some way. 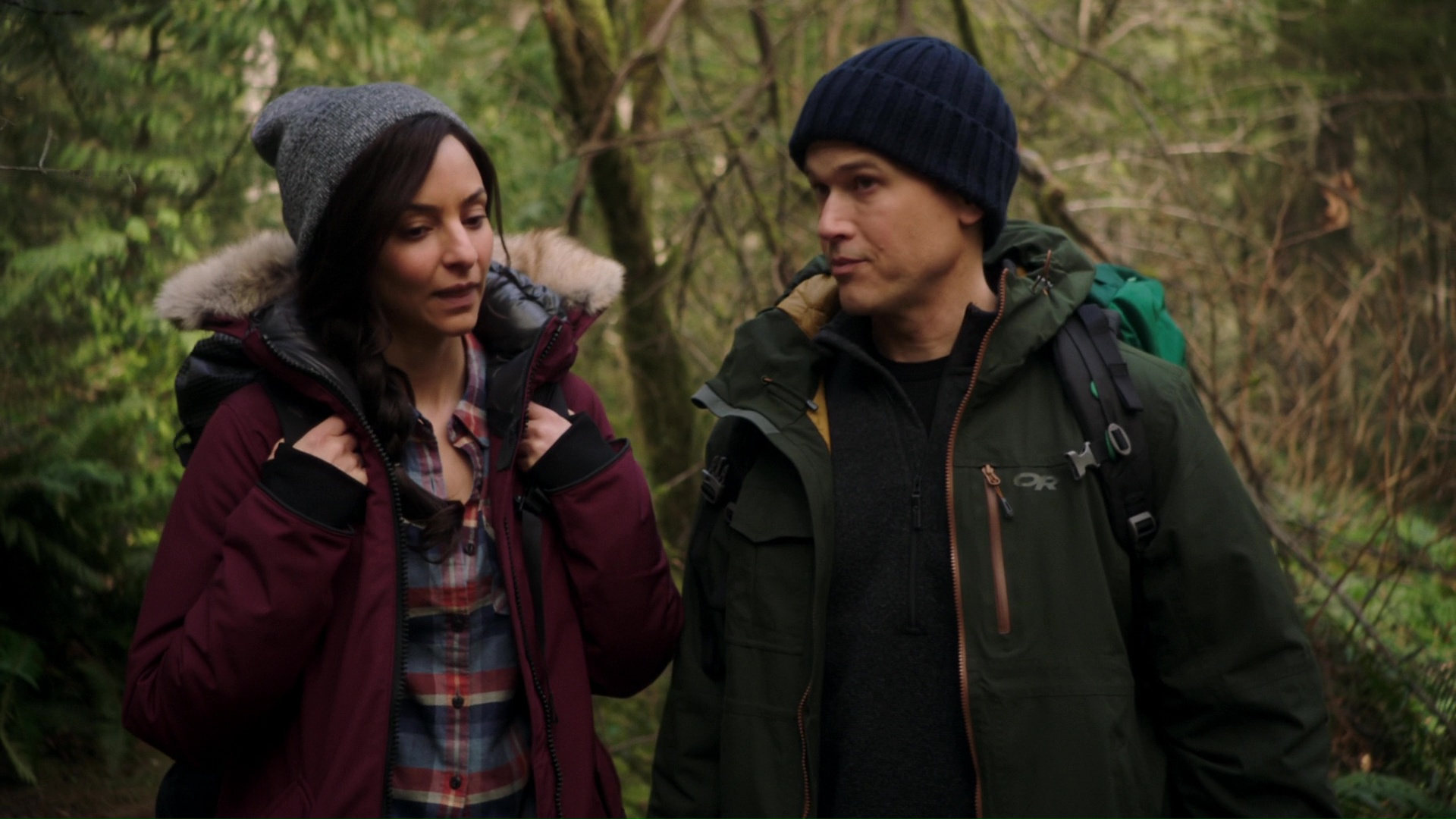 Getting away from it all

Sara, Mick, Spooner and Astra are abducted and taken to the bowling alley and naturally have to learn to work as a team in order to save the world. Aliens are turning planets into bowling balls and immortalising them in a trophy case should the inhabitants lose the game. The stakes are largely brushed aside as being incidental as they often are in this show. It’s for the best as tense end of the world plots where the focus is on the fact that the world is ending is very played out and doesn’t fit the overall tone of this show.

Instead winning the game is secured as a goal that has to be achieved while establishing that each of the characters have a part to play in it. Unsurprisingly Sara is the leader and a capable bowler because she’s more or less good at everything, Spooner is an expert bowler having found comfort in the game growing up, Astra wants nothing to do with it and Mick hates bowling so it’s immediately clear that the latter two need to be won over in order to secure victory.

Astra’s reluctance to bowl is very simple and doesn’t really come from an underlying issue that needs to be resolved. There is a general issue over her lost childhood and never experiencing normal activities like bowling growing up but there’s nothing specific preventing her from embracing the need to play the game beyond her usual standoffish nature. It’s resolved easily when she realises that she has no choice but to play after Spooner is injured. It works well to not build a complicated arc around her deciding to join the bowling team as being naturally obtuse is a good enough reason for her to not be interested. 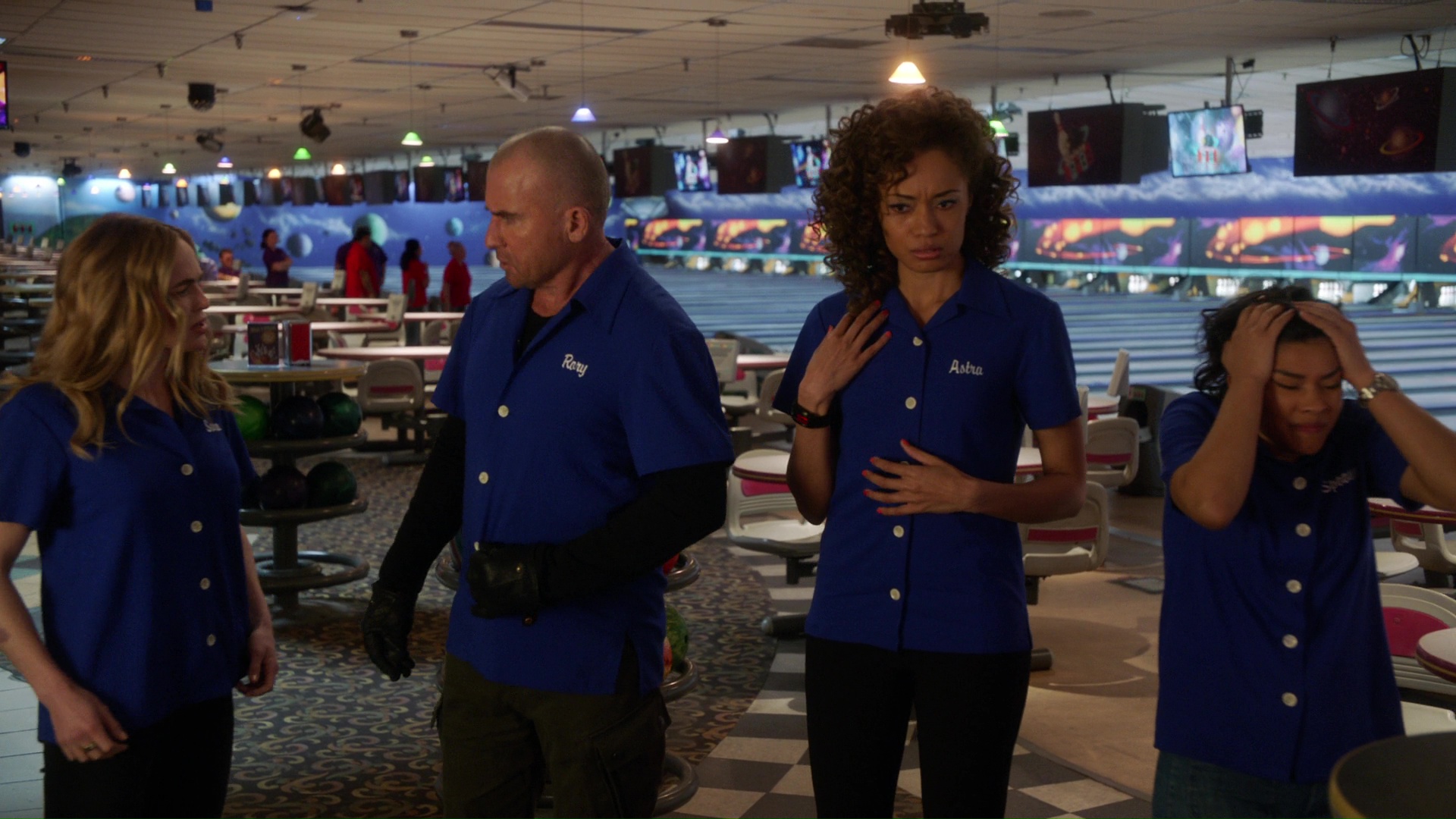 Spooner’s skills are a clear early asset which means that the tension has to raise by her being unable to play as between her and Sara victory seems a lot more certain. Her injury makes the situation more urgent as it leases Sara as the most competent player. The brief yet fascinating insight into Spooner’s past through her love of bowling and how that gave her something real to focus on growing up was done well and deployed naturally. The convenience of this detail of her past being entirely relevant to the current problem can be forgiven because of how strongly it functions as a character beat plus it brings out a previously unseen side of Spooner in her ability to have fun and loosen up given the right circumstances.

Mick’s objection to playing is largely because he has secured a reputation as a curmudgeonly presence but there’s extra detail to be found in him being unable to play due to never taking his gloves off. Spooner asks him about this and he shows her the burns that cover his hands along with a statement about his past not being for everyone to see. It’s a brief moment of vulnerability from Mick as well as a showcase of him beginning to trust Spooner or at least accept her as part of the team. He admits to her that there’s something he is sensitive about and this affects his ability to engage in certain activities. Spooner regards him with sympathy after learning this and comes up with a creative compromise that preserves Mick’s dignity while allowing him to participate in the game. It’s a simple solution of giving him gloves that expose the required fingers. The solution is simple but it shows understanding of what Mick is dealing with from Spooner as well as offering him assistance in finding ways to manage it. Spooner is rapidly cementing herself as a creative thinker and a great addition to the team. 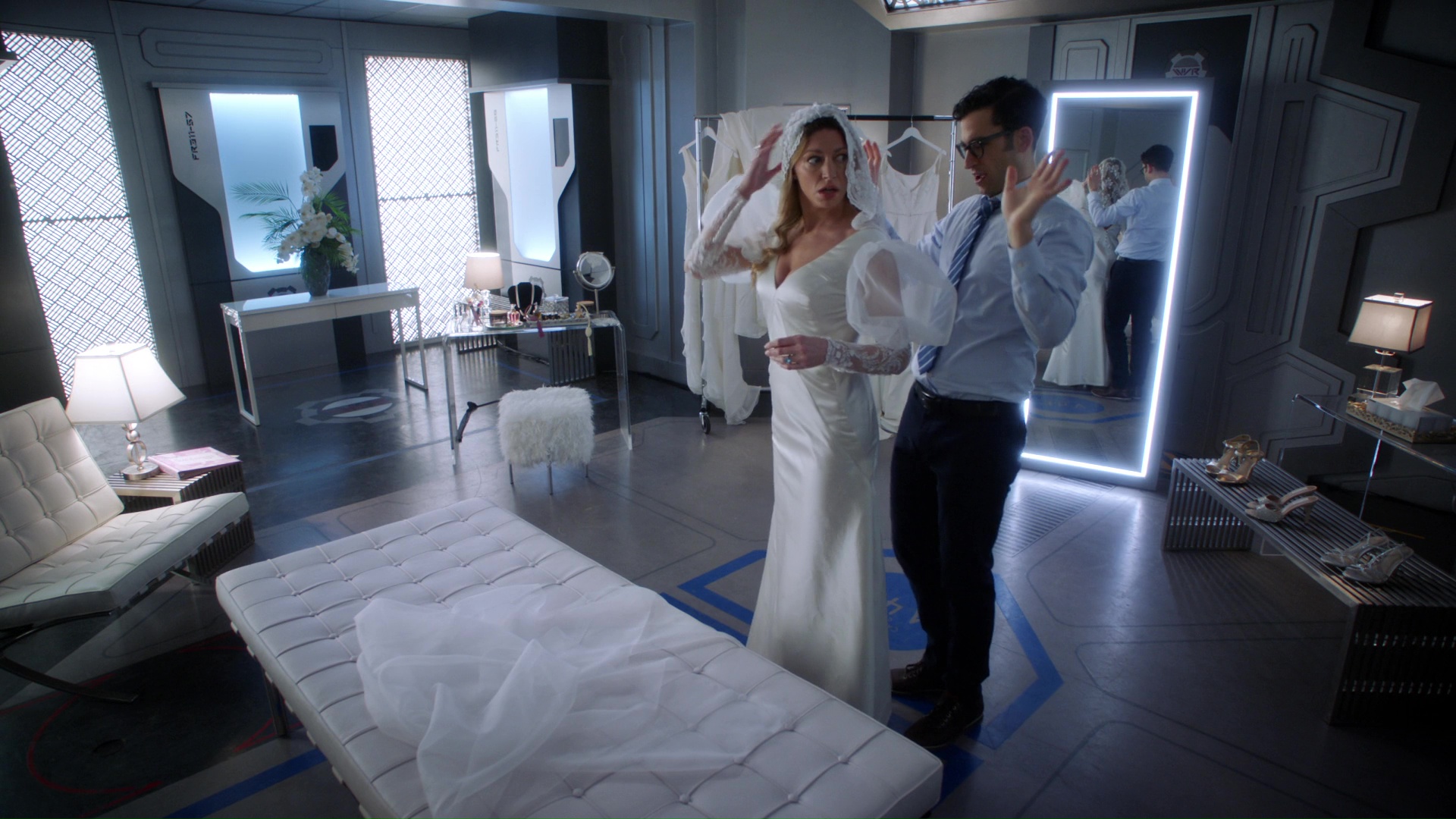 Those on the Waverider are occupied in various ways. Managing the task at hand are Behrad and John who are trying to work out what the current problem is with John using his temporary magic to get them out of the Temporal Zone. He is at the point of his addiction where he feels highly energised and is able to function but concerning behaviour is also starting to manifest and is being noticed by Behrad even if he doesn’t have cause to be worried at this point. He sees John’s current state of being as a reaction to regaining his magical ability rather than being in any way dangerous. He even compliments John on being a good fit for Zari so there is still a long way to fall where John is concerned and it will be coming soon judging by the fatalistic prediction given towards the end of the episode.

Ava is suffering from pre-wedding jitters and fixates on finding the perfect wedding dress. Gary tasks himself with distracting her from the ongoing crisis by suggesting lavish alterations to her dress which gets to be about as ridiculous as you might expect. Ava’s jitters are a very grounded problem for her to deal with and gives Jes Macallan the space to take on the role of director by confining her role to a very particular part of the episode. It’s a lot of fun watching her interact with Gary as he takes great delight in wasting time through making more ridiculous alterations to her dress. It allows Ava’s nerves to be central as well as Gary’s affectionate connection to her that largely goes unreturned.

Nate and Zari take time away from the team to enjoy their last night together before she returns to the Totem. The purpose of this part of the plot is twofold; one is to provide a ground level view of the threat that is facing Earth. Chasms have appeared that are actually the finger holes for the bowling ball that Earth has been turned into which is a wonderfully creative detail that adds to the charming lunacy of the situation. They also deal with earthquakes whenever anyone does something with the ball so there is a clear connection between the bowling alley and Earth. Zari and Nate influencing the external action makes the two plots appear connected despite having very little to do with one another from a characterisation point of view 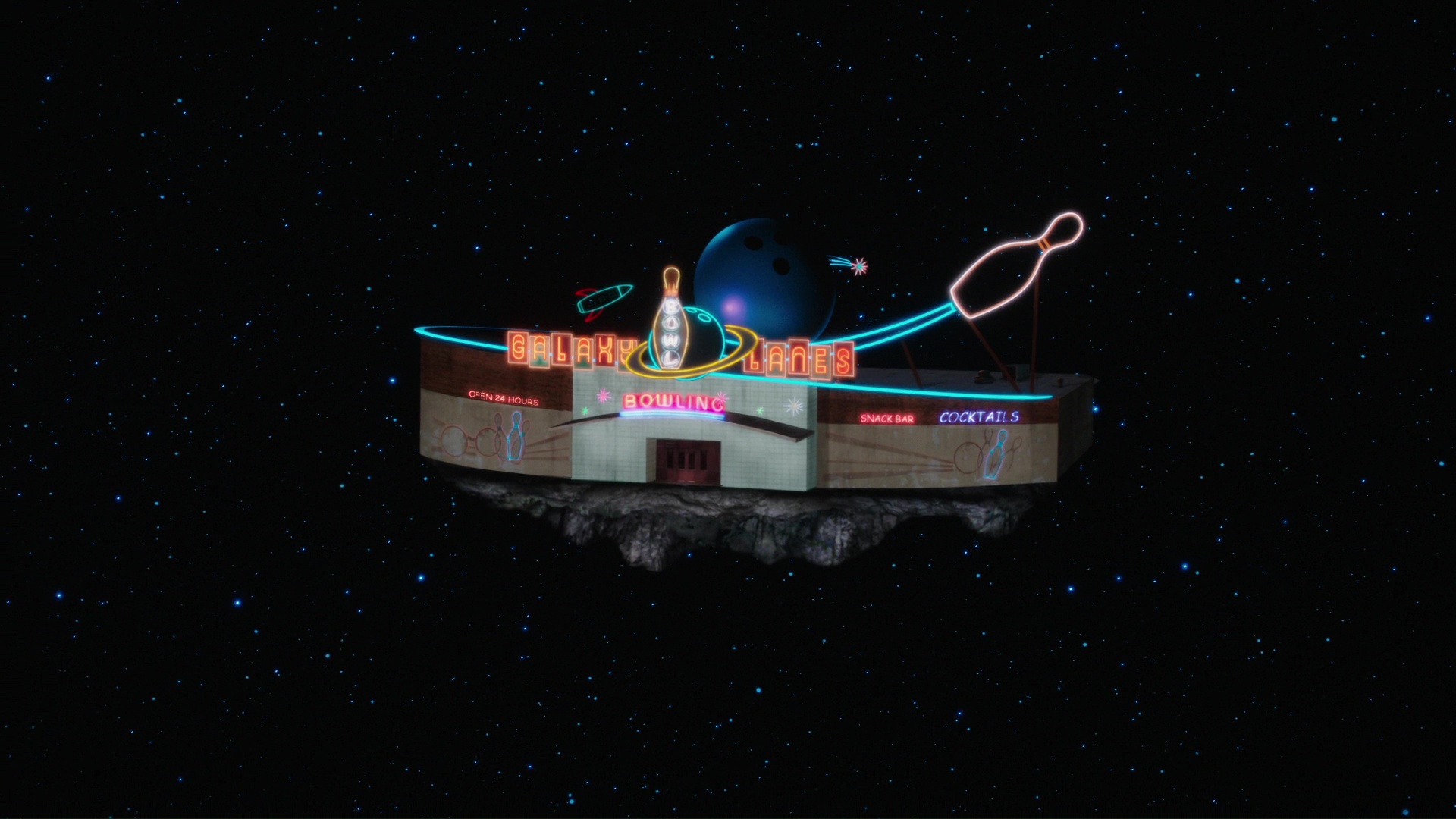 You don’t see that every day

The main purpose of this plot is for Nate and Zari to explore the viability of their relationship. They encounter an insufferable couple who ask them questions they have largely been avoiding with their relationship being equated to a long distance once. This brings Zari’s insecurities to the surface and prompts her to suggest they split up because there’s no way they can work as a couple considering everything that is stacked against them. Nate agrees on a practical level but wants to continue their relationship because he believes that their feelings are worth navigating the difficulties. Ultimately Zari agrees and the issue is resolved for now but it’s clear there will be further difficulties ahead.

Nate and Zari work really well as a couple because of how oddly matched they are. Zari’s cynical outlook risks sabotaging the relationship as she is predisposed to believe that things will end badly. Nate does agree but is far more positive and doesn’t want to accept it particularly when they can be together in the meantime. The possibility of Zari being wrong in her prediction does prove to be enough to sway her away from that thought spiral. It also ties into her loneliness and her desire to combat it.

Despite the strong work and attention given to their connection this problem largely comes from nowhere. This is due to the lack of focus on Zari 1.0 since she left the Totem. She was barely featured in the previous episode so there has been no time to establish a current baseline for her relationship with Nate which makes the problems they deal with in this episode appear manufactured. The actors carry it and the writing is very strong but no groundwork has been established to base this on. 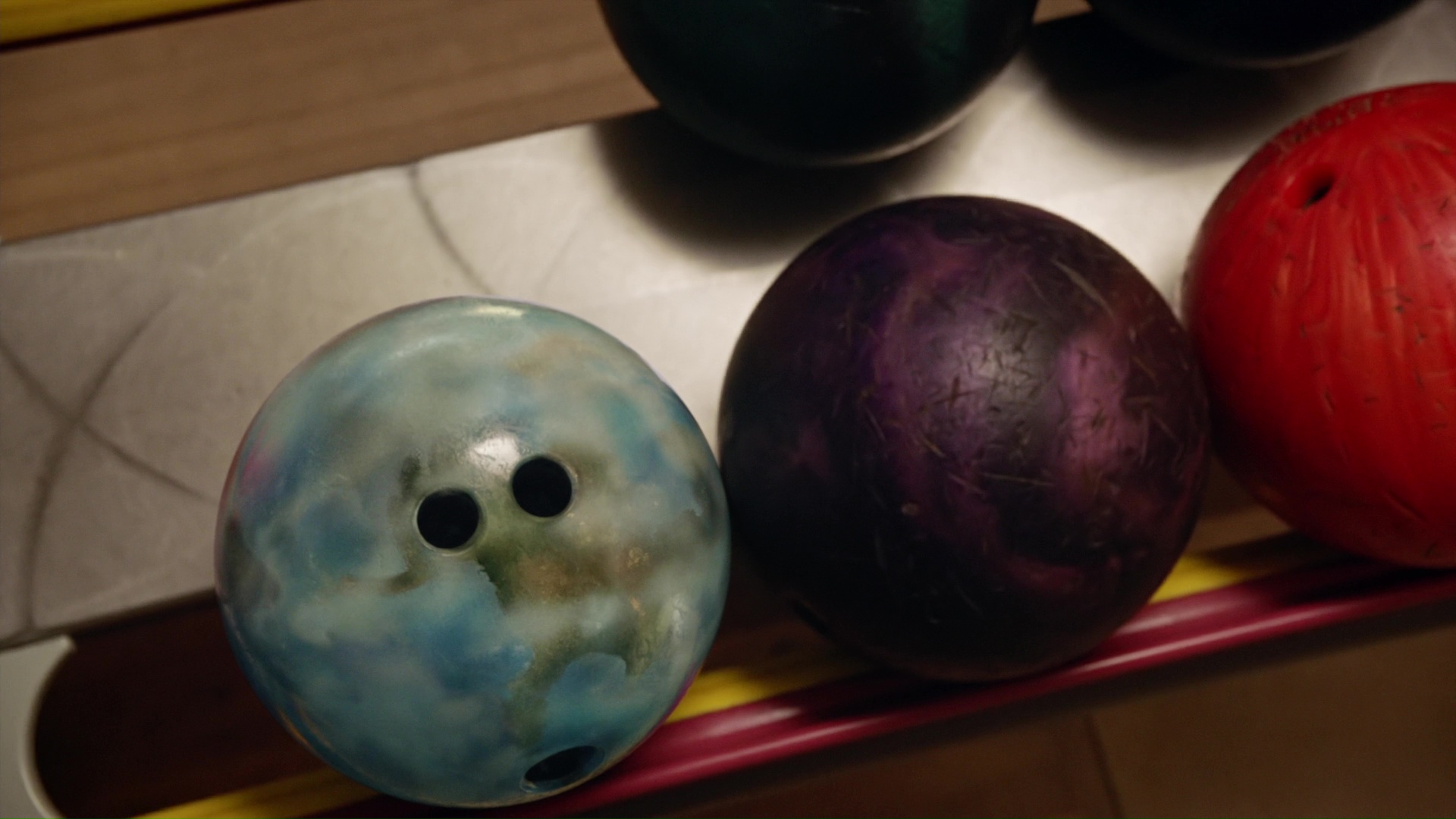 A really fun episode that makes great use of the characters and maintains a sense of urgency among the lunacy. The bowling tournament is very much on brand for this show and is used really well as an excuse for the characters to play to their strengths. Sara and Spooner being the skilled players works well with the insight into Spooner’s past being conveniently connected to the current situation while being well handled as a character beat. Astra’s reluctance tying into her general issues around her lost childhood as well as her usual standoffish nature means that she doesn’t have a defined arc and remains consistent as a character. Mick’s unwillingness to participate is also due to his curmudgeonly personality but also allows for a measure of vulnerability attached to the burns that cover his hands and not wanting everyone to see that. Spooner regards him with compassion and comes up with a simple solution that showcases her empathy and quick thinking.

On the Waverider John and Behrad work well together in trying to get the ship out of the Temporal Zone. John is at the stage of his addiction where he feels energised and is able to function while concerning behaviour is starting to manifest. It is being noticed by Behrad but misinterpreted at this point but there is clearly a long way for John to fall judging by the fatalistic prediction towards the end of the episode. Ava being distracted by Gary through outlandish alterations to her wedding dress was a really engaging and amusing plot. The pre-wedding jitters being experienced by Ava are well placed and Garry’s affectionate connection to her is naturally slotted in. The Nate and Zari relationship receives some compelling attention with Zari’s cynicism threatening to derail it. Nate’s more optimistic outlook speaks to her loneliness and for now keeps them motivated to try and beat the odds. This conflict does come from nowhere but it’s carried by strong writing and acting. Their plot also feeds into the bowling tournament by showing the impact of the threat.