DC’s Legends of Tomorrow takes the team back to 1973 to make sure that Nixon tells his historic lies so that the timeline can be preserved.

The truth has often been a problem in Arrowverse shows. Characters tend to keep vital information from one another in order to manufacture drama a d divide the group once the truth becomes known. This show hasn’t been guilty of that for a while but that doesn’t mean the characters are entirely honest with one another. 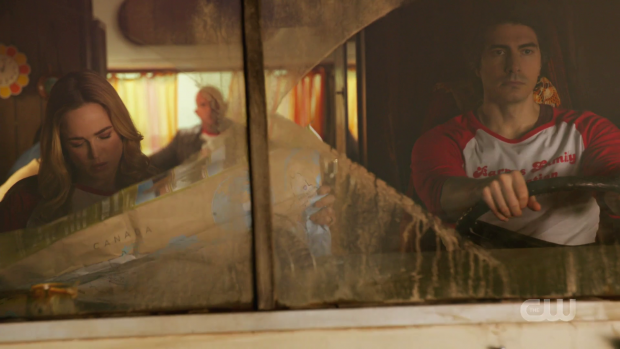 Trading down from the Waverider

DC’s Legends of Tomorrow focuses on a group of misfits so there is natural friction due to the clashing personalities on the team. This often makes for great character interactions because they aren’t a group who would naturally get along and the unique circumstances they happen to be in only intensify this.

Their mission begins when the timeline changes because of Richard Nixon telling the truth when he was supposed to lie to the American people. This has a profound effect on history so the team need to get things back on track. The cause of Nixon’s honesty streak is a magical cockroach that feeds on lies leaving only the truth behind. Naturally this creature ends up making its way around the Legends in order to clear the air. Ray, John and Mick are played for laughs while still delivering some insight into how they feel about one another. It’s no surprise that John and Ray are irritated by one another but the reasons for that shared irritation are interesting by themselves as they basically amount to things that would naturally annoy people who are sharing a fairly small space. It adds texture to their relationship and provides a few laughs in the process.

Sara isn’t someone who typically lies but as Captain she does carry the weight of responsibility on her shoulders and doesn’t typically share that with the crew. She is reeling after her breakup with Ava and is in denial about how deeply affected that she is. At first she is eager to immerse herself in a mission to take her mind off things but the opposite ends up happening thanks to the claustrophobic circumstances brought on by them all occupying a stolen R.V. and getting on each other’s nerves. The cockroach causes her to explode at Mona because she becomes the trigger point for all of Sara’s pent up emotions over her breakup with Ava and their current situation with the Time Bureau. At this point she blames Mona because it was her efforts to protect Konane that indirectly led to these things. 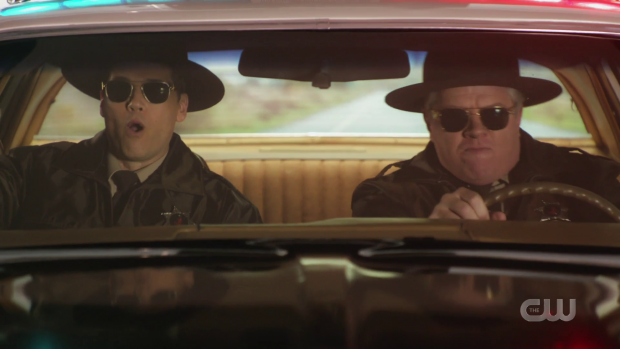 A road trip is the best bonding experience

Of course Sara is projecting and lashing out because she doesn’t want to face up to the real truth of the situation. Mona is an easy target as far as Sara’s concerned and the fact that she is inhabited by the truth bug means that on some level she believes what she’s saying. Once Mona runs off it’s John that helps Sara gain some perspective by playing back her own inspirational words as if it were an empty gesture to him but important for her. It’s a fun interaction that sort of shows the necessity of lying on occasion as John claims to not believe what he says. Then again it’s entirely possible that he has subscribed to the notion of team pep talks and is covering this up with bravado. At this point anything’s possible but John remains a capable foil for Sara and someone she can be vulnerable with since he isn’t under her command in the same way the others are. Their dynamic is a lot of fun and distinct from every other character in the show.

Sara’s renewed perspective helps her to deal with wolfed out Mona. As with many werewolf stories her transformation acts as a visual representation of her mindset at that point. She remembers how Sara treated her and channels all of her rage into that encounter until Sara absolves her of blame by admitting that there were things she wasn’t prepared to accept and blaming Mona was the easiest way out. Sara apologies and encourages Mona to be true to herself which ends up trigging her transformation back into her former self. It’s a short arc for Sara but an effective one and it helps solidify Mona as one of the team in a fairly organic way.

The truth comes into play significantly in the Hank/Nate relationship. They have the opportunity to go on a road trip together in search of the Legends which forces them into a situation where they have time to do little more than talk to one another. It’s a classic “get to know each other and settle our differences” scenario which allows a natural excuse to address the obvious rift that exists between them. It seems that the barrier to them being close is knowledge. They are a family who never really talked or opened up to one another about anything so the rift just continued to grow until it reached the point it is now. Forcing them together is a great way to overcome that and the conceit of Nate asking questions about Hank’s past because answers are needed to password resetting security questions is ingenious as it furthers the idea that Nate is willing to work against him while eroding the knowledge gap. Nate suddenly taking an interest to ask those questions by himself wouldn’t have worked but the password excuse is perfect and having Nate take an interest once Hank starts to open up creates a natural progression in their relationship. Hank adds context to Nate’s childhood which allows things him to achieve clarity on things that didn’t previously make sense. 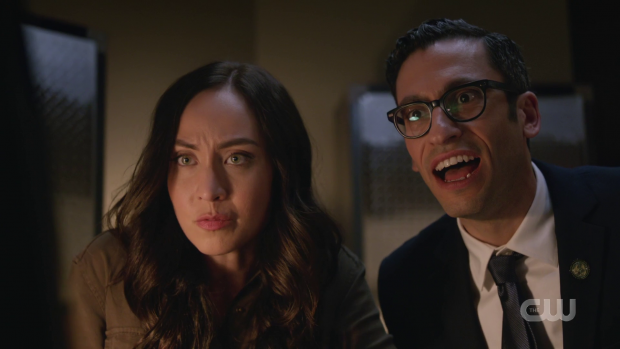 Once the truth bug comes into play this develops even further as Nate is completely honest about how distanced he feels because of the lies and secrets that defined their relationship. His truth isn’t about working behind Hank’s back as it’s more about the fact that he wants to tell his father that he loves him but is afraid of what the reaction will be. I’ve been less than impressed by this strained dynamic this season but this episode really makes it work because the situation lends itself perfectly to that sort of discussion. Hank telling the truth without the aid of a truth bug is especially powerful as he lays all possible cards on the table other than the secrets he is bound by his job to keep. He makes it clear that everything he does is for Nate and the two reconcile in what makes for a really moving moment.

This also shifts Hank’s perception of his actions and causes him to want to get out of his deal with Neron who predictably doesn’t take kindly to people welching on their arrangements and kills him. If this had happened an episode earlier without the work being done on Hank and Nate then I would have considered this ineffective but this episode successfully turned Hank around into a compelling character worth investing him so his apparent death at the hands of Neron has the desired impact. Nora being blamed for this also sets up an interesting conflict as there will no doubt be those who believe she’s innocent and will look to defend her.

Nora being brought into the narrative seems innocuous at first as she does little more than back up the other plots but the hint of some kind of connection with Neron and her clear terror when she realises who is being dealt with is a fascinating seed that will certainly become important later. It was previously unclear how Nora would fit into the season as well as the team dynamic but this looks to be an easy way for her to be included and have her presence matter. Neron still needs work as a villain as he’s little more than a generic demonic presence who seems menacing enough but ultimately has little substance. I have no doubt this will be corrected but for now it’s fairly weak and there’s no sense of what the dynamic he had with Hank was like so there’s nothing to really take from their interactions. 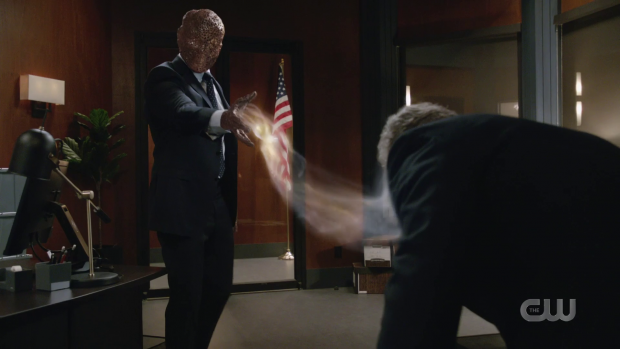 Neron doesn’t take kindly to welching on a deal

A strong episode that makes really good use of the available elements as well as a forced truth gimmick to further character relationships in organic and compelling ways. Some of the truths delivered are played for laughs particularly between Ray and John who get on each other’s nerves in ways that are relatable to anyone who has been forced to share a relatively small space. For Sara the truth she confronts is much meatier as she believes on some level that her recent breakup with Ava as well as the current friction with the Time Bureau is all Mona’s fault since her actions indirectly led to the current situation. John helps her contextualise how she feels and she sets things right with Mona which allows her to change back from her werewolf form. It’s a short arc for Sara but a compelling one that works well within the confines of the story.

Nate and Hank’s relationship finally becomes something worth investing in thanks to their road trip. Nate asking Hank personal questions in order to get the answers to password resetting security questions is the perfect excuse for Nate to ask those sorts of questions without it feeling forced and allows him to organically become genuinely interested when Hank opens up to him. The truth bug comes into play and forces Nate to open up about wanting to tell Hank he loves him but not feeling comfortable doing so which results in Hank making it clear that everything he does is for his son. It’s a touching reconciliation and finally makes their relationship feel worth investing in. This makes Hank’s death feel more impactful even though his partnership with Neron was never properly contextualised. If the death had happened even a week ago then it wouldn’t have had the necessary weight but the focus on his relationship with Nate gave it so much extra meaning. Nora being blamed for it will create interesting complications as it’s more than likely there will be those on the team who believe in her innocence. The connection she seems to have with Neron as well as the terror she experiences makes Nora’s presence in the episode feel something other than perfunctory.