“The Legion of Doom”

DC’s Legends of Tomorrow gives the villainous trio made up of Eobard Thawne, Malcolm Merlyn and Damien Darhk centre stage as they continue their quest to find the Spear of Destiny.

I mentioned just last week that the Legion of Doom would need proper motivation as their charismatic banter would only take them so far. This episode answered my prayers by devoting a lot of the running time to doing just that. In terms of structure this was handled really well with Malcolm and Darhk going on a journey towards cooperation together before developing Thawne’s role in their partnership. 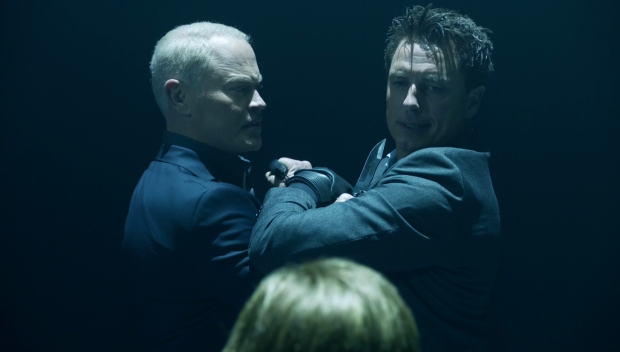 We shouldn’t be fighting each other!

It’s pretty much standard practice for villains to eventually be at each others throats since they all have their own evil agendas that clash with one another. Heroes can work together quite happily but villains can’t because their goals rarely match up long term. That’s what makes this interesting as Malcolm and Darhk are well developed characters who are forced into a situation where they are playing second fiddle to someone else. That isn’t a position either of them are comfortable with and the cracks are starting to show.

Neil McDonough and John Barrowman are a joy to watch as always and their childish bickering really made the episode memorable. Their motivations are established fairly early on with Darhk not wanting to be killed by Oliver in 2016 and Malcolm wanting to reclaim some of his former glory after essentially hitting rock bottom. They’re simple goals but easy to understand and they fit the characters.

The journey towards cooperation is an interesting one to watch due to the acting but the writing is also very strong. There’s a lot of mistrust aimed at Thawne because he disappears every time his watch beeps and leaves them to do his dirty work. He is effectively treating them like henchmen and the two of them are becoming really frustrated with it. Damien Darhk is used to being in charge and Malcolm used to be Ra’s al Ghul so taking orders isn’t something they do well. Thawne lured them in with the promise of changing their circumstances as well as being part of an equal partnership but they are both doubting that any of this is true. I imagine some of this has to do with the fact that they both know they would betray him if the roles were reversed. Internal villain politics are really complex and interesting sometimes.

Part of the dynamic between Malcolm and Darhk comes from Malcolm knowing who Darhk is while Darhk has no idea who he is. That gives Malcolm something of an advantage as he knows what to expect from Darhk. This allows Darhk’s strengths to come through in different ways as he shows his ability to read people when he understands exactly the sort of man Malcolm is and is able to use that against him. This is especially evident when Darhk tugs on the thread of everything going wrong for Malcolm and teases him about his missing hand. It represents how far he has fallen and it’s very much a sore spot for him. 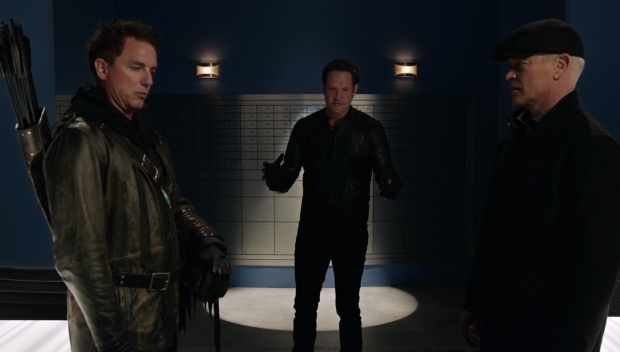 The Legion of Doom settle their differences

As you might expect they eventually come to blows but it doesn’t last long as Rip convinces them that Thawne wants them to be at odds with one another so that they don’t question his leadership. It’s something that each of them are too blinded by their ego to see so it has to be pointed out to them. After that point they are united against Thawne and hatch a plan to sweeten the deal for themselves. It’s really fun watching the loyalties shift and the scenes when they are working together are essential viewing.

Once they manage to trap Thawne we are given a lot of information about what motivates him. This comes from his own mouth as well as some conclusions that the Legends come to while puzzling over the situation. It turns out that this version of Thawne is the post “Flashpoint” version who only exists because Barry messed with the timeline. Ever since that point he has been trying to outrun his own non-existence after the events of The Flash season 1 finale “Fast Enough“. He stopped existing when Eddie Thawne killed himself but Speedsters are able to outrun the effects of the timeline as long as they stay on the move.

It’s hopelessly overcomplicated but it makes a lot of sense though it doesn’t explain how Eobard Thawne was still able to exist in “The Reverse-Flash Returns” but asking for consistency in this universe when it comes to time travel falls on deaf ears at this point. I like the attempt to explain this and I accept the explanation but it starts to fall apart when some thought is applied. As long as everything else going on around it is working I can deal with some leaps in logic as long as the inconsistencies aren’t harming the story in any way and so far they aren’t.

This explanation only really exists to solve the mystery surrounding Thawne’s speedy -pun definitely intended- departures. He is doing it to outrun his fate and it neatly explains why he needs help. The plan hatched by Darhk and Malcolm to have the trio on equal footing in their partnership is well done and gives the team an alliance founded on honesty rather than lies. 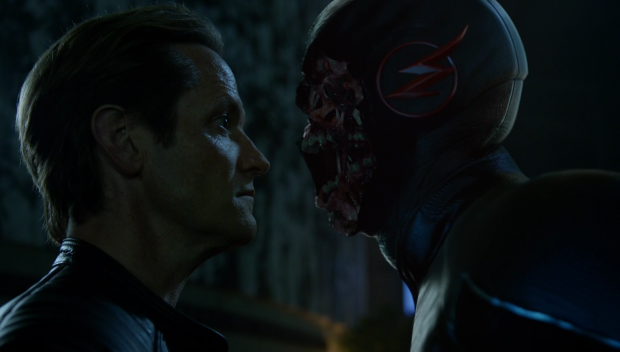 Eobard Thawne stares death in the face. Will he blink?

The introduction of the Black Flash was a really nice surprise that I didn’t see coming. I predicted this when Zoom was taken away by the Time Wraiths in “The Race of His Life” but seeing it play out in this show made sense and helps reinforce the connected universe.

I loved the scene where the Legion worked together to bring down Black Flash temporarily. It was really tense and frightening to watch Thawne struggle to keep still as Black Flash sniffed around for traces of the Speed Force. It reminded me of the famous T-Rex scene in Jurassic Park largely because of the rules around sensing movement but the sequence had its own spin on it and it was really cool to see the Legion work together as a coordinated team. I feel like they’re stronger as an antagonistic force now.

Rip Hunter’s role in the episode was well handled as well. Arthur Darvill does a great job playing Phil who feels completely different from Rip. It gives the characters a place in the show without trying to upset the dynamic of the Legends at this point. I imagine that will come but for now seeing him being a confused mess is really entertaining. The twist of him unwittingly being reprogrammed to join the Legion of Doom at the end was really effective as well. He has effectively become Chronos and I’m looking forward to seeing how that plays out.

The Legends had a reduced role this week which makes sense given the effort the writers took to develop the Legion of Doom. Good villains really can steal the show and the Legends had more than enough to do to keep my mind on them. The long brainstorming session was really good and it seamlessly blending into the reveal surrounding Thawne. 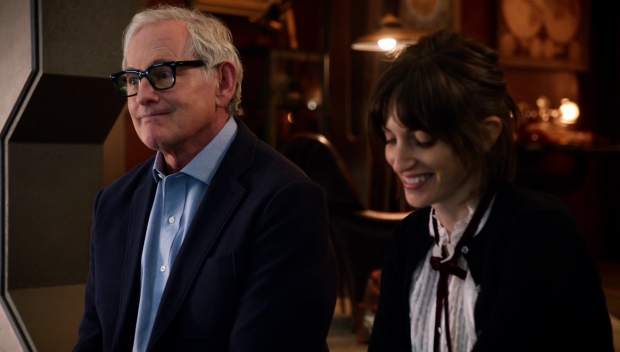 Martin and Lily reach an understanding

Martin was given the most development of the team when he enlists his daughter Lily to help with the recently acquired amulet. It’s a good idea to move away from the mystical and play to their strengths by approaching it scientifically. It was also a good opportunity for Lily to return to the show and play around with the dynamic between her and Martin.

Her return gives her the knowledge that she didn’t exist a few weeks ago from Martin’s perspective and the drama that surrounds her feeling that she was a mistake. I mentioned in an earlier review that removing the time travel aspect of their relationship gives us a very relatable father/daughter story where the child was unplanned and the father has to deal with it. This episode gives us the reverse of that when the child finds out that her parents never actually wanted her. It’s more complicated than that because Martin cares for her deeply and Lily clearly experienced a close relationship with him but it doesn’t alter the fact that Martin feels uneasy around her because his memories of her are at odds with memories that don’t feature her. It’s a complex situation and Victor Garber handles it well.

There’s an extra layer to this. Martin held off on having children because he was worried that history would repeat itself and he would be just as loveless as his own father was. That doesn’t seem to have been the case and Jax helps put his mind at ease by pointing out that they are all proof that history doesn’t have to repeat itself. It’s a nice relatable tie in to the time travel concept that this show is built on.

Lily’s reaction to finding this out is handled wonderfully and Christina Brucato plays the wide range of emotions Lily feels excellently. Naturally the conflict is resolved by the end of the episode but there is still that uncertainty there. I like that Martin isn’t able to answer the question over which reality is “real” but also acknowledges that it doesn’t really matter because Lily’s existence is important. 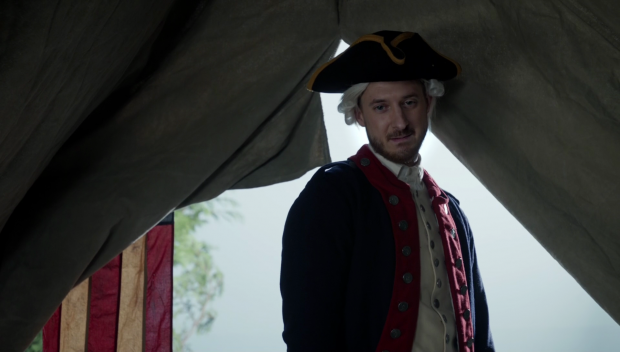 Rip on the wrong team

An excellent episode that plays with the villain dynamic in a fascinating and entertaining way. Neil McDonough and John Barrowman bounce off each other wonderfully and the journey towards cooperation that their characters take is endlessly entertaining. Having this result in a reveal of Eobard Thawne’s motivation and an effective showdown with Black Flash was a nice touch as well.

The Legends take a back seat in this episode which was the right decision but their long brainstorming session was compelling viewing and tied into the Eobard Thawne reveals very naturally. Lily returning to the show and dealing with the fact that she is a time aberration was really well handled in terms of acting and storytelling. It’s a compelling exploration of a relationship involving a father who has a child he didn’t plan for. This show is really firing on all cylinders right now and it’s just great to watch.