Doctor Who reveals the occupant of the vault and the Doctor is recruited by the Vatican to investigate a mysterious book.

The concept is a simple yet interesting one. I love the idea of a book that causes people to drop dead shortly after reading it. It’s a compelling mystery and feels like an seductive piece of intrigue. As soon as someone tells you not to do something then chances are you will be tempted to do it. That primal urge to defy warnings was at the root of The Ring films and this episode somewhat capitalises on this. 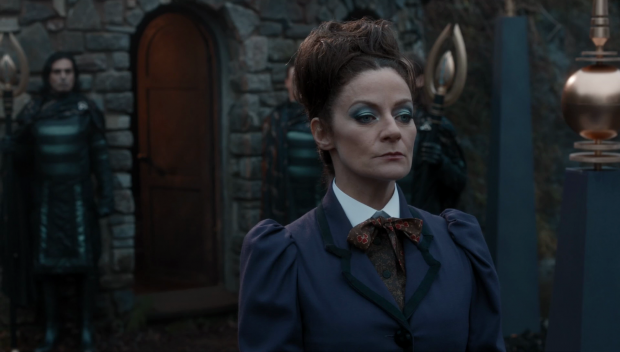 The occupant of the vault is revealed

I like how the episode builds a sense of dread around the book and the fact that the Pope (Joseph Long) directly recruits the Doctor to look into this. This fact manages to lend importance to the story with very little work being put into it. Knowing that the Pope is personally involved in something means that it will be something that represents a significant threat.

The execution of the mystery surrounding the book was fairly mixed. Doctor Who usually delivers effective dark corridor scenes and this is no exception but the reveal of what was at the end of the corridors fell somewhat flat as did many of the reveals in this episode. Many of the scenes around the Veritas book plot felt extraneous as there just wasn’t a lot of plot there. It took a while for the episode to get to the reveals so many of the scenes weren’t really about anything.

Some of this was made up by characterisation. The episode picks right up from last week with the Doctor still blind and solving the problem slightly using his Sonic Sunglasses. They give him enough information to get by but he still can’t see. It’s a good way to solve the problem of him needing to understand the situation while keeping the limitation. Nardole’s fills in the rest of the gap by describing things that he really needs to know. It creates tension well and beefs up the Doctor/Nardole dynamic by still preserving his established role as someone who exists to give the Doctor a hard time about the choices he makes.

Nardole is well served in this episode as well. Having him escort Bill and tell her what to do worked really well. Nardole has been established as having knowledge relatively equal to the Doctor in the adventures we’ve seen. Of course he won’t know everything the Doctor does but he knows enough to sound like an expert in every episode of this season so far. Establishing this before now was important because it lays the ground work for the Doctor to trust him with Bill’s safety in this episode. 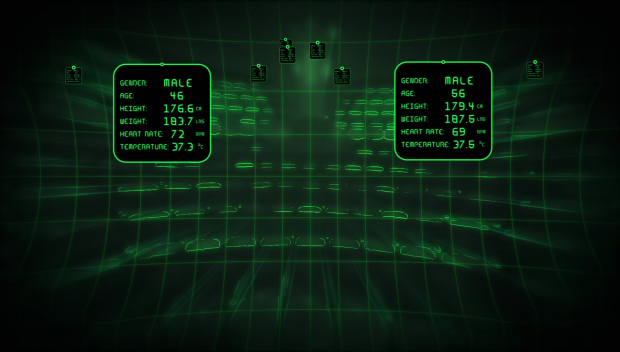 It’s a very brief team-up but it’s an entertaining one. Nardole acts a lot like the Doctor in warning her to stay behind him but Bill doesn’t have the same respect for him as she does the Doctor so feels less inclined to listen to him. Nardole’s passionate response where he points out the reasons he should be listened to was the perfect response as shown by how taken aback Bill was. Countering that by his high pitched squeal as he reacted to the dead body was a nice touch as well.

Having it established that Nardole knows his way around a situation is important as it means that his problem solving doesn’t seem out of place. He notices that everything seems very artificial and makes the comparison to the Holodeck from Star Trek or a VR Headset without the headset. Not only is the environment artificial but they are as well.

It’s a compelling reveal but also feels like it comes from nowhere somewhat. This is echoed later in the episode when the Doctor explains the whole thing and tells Bill that none of what they have seen or experienced is real. He makes the comparison to video games and uses the example of Mario learning the truth about his existence. It is suggested that Mario might be sick of dying if he knew the truth and take his own life. Once computer programs learn the truth about their existence they automatically give up on life and put theirs to an end. This doesn’t make an awful lot of sense and expects us to accept some really big ideas as truth.

Most of us will be familiar with The Matrix and how that plays with the idea of what makes reality. This episode doesn’t have the time or depth required to explore that idea so the reveal falls a bit flat. Nobody really has time to consider the implications of their existence because they have to be killed to create a shocking moment that moves the plot forward. There is no ambiguity to any of it and most of this episode feels a little disposable because the characters we’re following aren’t actually the characters we should be following. They may be accurate simulations of them but it’s unclear when they would have been created and how that actually happened. The Doctor was clearly created after he went blind but when and how did this happen? It’s possible that this might be answered next week but the reveal is hard to swallow because it doesn’t really come from anywhere. 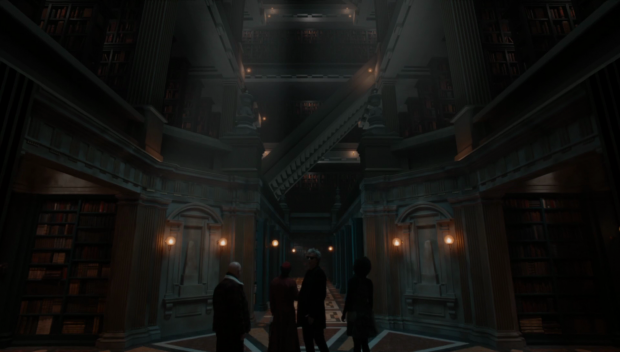 Our labyrinth for the week

Another thing that let the episode down is that it kept jumping to other story threads. This was the right decision in terms of keeping the episode from becoming boring and helped to disguise the lack of plot in the main story. The problem comes from the fact that the stories aren’t really connected so might as well have been different episodes.

I do like that the occupant of the vault is revealed at the halfway point of the season as I fully expected the reveal to be saved until the penultimate episode. It’s good to have it revealed now because the answer isn’t actually all that interesting. Missy is a really obvious choice so revealing it in the penultimate episode of the season would be a let down. Answering the mystery now means that the predictability isn’t a problem as there are plenty of episodes to explore the dynamic between the Doctor and Missy now that the answer is known.

I did like the scenes building up to Missy’s execution. The setup was interesting with the mysterious group that had pronounced judgement on her and the mechanics of needing another Timelord to carry out that judgement. If he is to be a one shot character then Rafando (Ivanno Jeremiah) is memorable enough. He has enough presence and charisma to believably stand up to the Doctor. It was clear that the Doctor wouldn’t carry out the murder of one of his own people, let alone his oldest friend and rival but there was a good amount of tension to the scene. 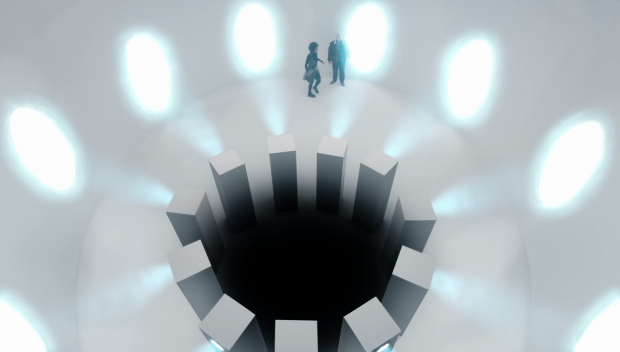 Missy definitely hasn’t been my favourite character but she’s really good here as Michelle Gomez has an opportunity to give off emotional depth. It’s good to see her acting vulnerable when faced with her the prospect of her mortality and Capaldi plays the sorrow in his reaction really well. These scenes are emotionally charged and the best use of Missy since she was introduced.

The Doctor taking pity on her and promising to accept responsibility for her body -alive or dead- allows the Doctor to show his own vulnerability. Receiving an email from his digital self tells him that a major invasion is coming and his blindness makes him feel insecure about his ability to handle it. This causes him to practically beg Missy for help should he need it but there is no answer to the question. I suspect we will see a Doctor/Missy team-up before the end of the season but her silence helps terrify the Doctor which makes it more effective.

The weakest episode of the season so far but still had plenty to recommend. Doctor Who always does a good job of dark and foreboding corridors but the threat at the end of the corridors wasn’t strong enough to come across as entirely threatening. There are lots of scenes with not a lot happening because there is very little plot. The reveal that the scenario as well as the people aren’t real falls a little flat as there isn’t enough time to truly process it. Exploring themes of reality and identity is all well and good but a lot of time is needed to deal with these. This episode doesn’t have the time to spend on it so the reveal feels superficial.

Nardole is used well in this episode almost filling in for the Doctor who is still blind. He is responsible for protecting Bill and exudes authority while he does. Bill is surprised at this and the contrast between the authority and high pitched squeal when he sees the dead body was a nice touch. Nardole also shows his knowledge when he discovers the truth and explains it in a way that is easy to understand. The scenes involving Missy are well done as it allows Michelle Gomez to play Missy with a degree of vulnerability. Capaldi plays the sorrow the Doctor feels really well. Revealing that Missy is the occupant of the vault works because it is so early in the season. It’s an obvious reveal but diffusing it by answering the mystery now rather than later makes it more acceptable. Having the knowledge now allows the Doctor to project his fear of the invasion that’s coming by asking Missy for help since he’s blind and will be less effective. 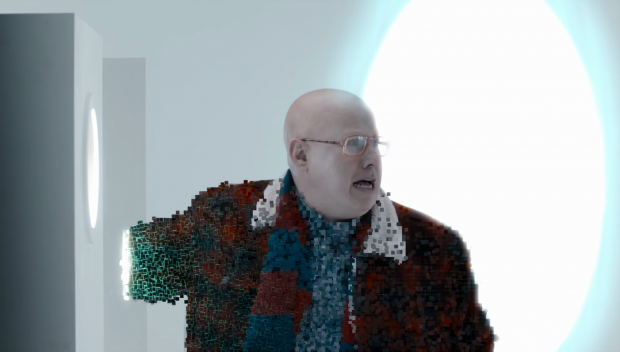