Historical celebrities getting involved in alien plots is among the bread and butter of Doctor Who. The idea dates back to the very early days of the show when its purpose was to educate viewers on important historical events through a science fiction lens. An element of that purpose still exists but for the most part it’s an excuse for The Doctor to have an adventure while matching wits with someone historically significant. 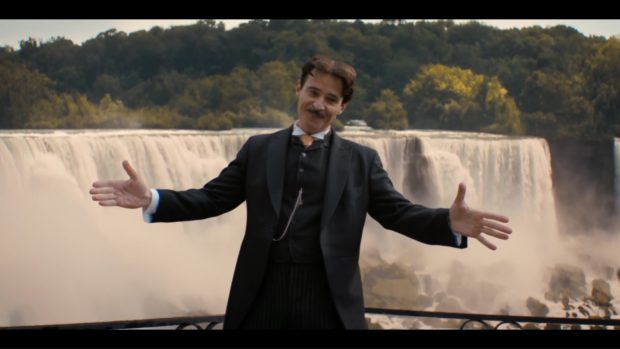 This example works for the most part though the script gets a little too overloaded with hero worship in a way that proves distracting to the overall narrative. The story often halts for an out of place list of everything that Tesla either directly or indirectly inspired. It does remain consistent with the episode’s message about how important new ideas are for progress but it also means that some of what is being broadcast is a love letter to the main historical guest star rather than a Doctor Who story.

Thankfully this issue doesn’t destroy the episode, it’s distracting but there’s a lot it does well. Most impressive is the casting of Nikola Tesla. Goran Visjic brings him to life with intelligence, integrity, wide eyed curiosity and a presence that rivals that of The Doctor. It’s easy to believe he’s worthy of all the praise thrown his way throughout the episode and he fits nicely into The Doctor’s world. I really liked the dynamic between Tesla and The Doctor. There is a mutual respect between them but they also challenge one another in ways that keeps their dynamic feeling fresh and interesting. They share a lot of screen time together and there’s clear admiration from The Doctor for what she considers to be one of Human history’s greatest minds.

The threat actually exists because of Tesla. He stumbled across a signal from a race called The Skithra and responds to it because of his boundless curiosity. They take interest in him because they consider finding their signal to be a sign of intelligence and they need an intelligent mind to repair their ship. The Doctor eventually learns that they are unable to repair their technology because all of it is stolen from various sources. In essence The Skithra are tech thieves and their inability to innovate is now catching up with them. 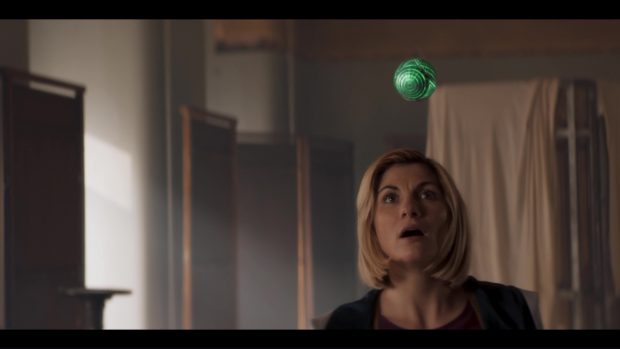 This problem proves even more relevant as the second historical figure present in this story is Thomas Edison (Robert Glenister); a man who used his wealth and influence to take credit for ideas that others came up with. He would do this by employing them and supplying the necessary resources in order to make their idea a reality. The time that Tesla worked for him is referenced to explain the animosity that exists between them.

Unfortunately, the episode is too busy to concentrate on the Tesla/Edison relationship which is a shame because it’s by far the most interesting thing going on here. Edison is irritated that The Skithra take interest in Tesla over him which hints at a degree of insecurity on his part. It isn’t explicitly stated but the implication is that he wants to be seen as a genius and innovator but knows that he isn’t so is always worried he will be found out as the fraud he sees himself at. Tesla has no respect for him and neither does The Doctor so he would be understandably concerned that the rest of the world will eventually catch up to that point of view.

There is the tease of an interesting debate within this episode that is never quite given the chance to breathe. Edison proudly admits that he employs people and makes their ideas happen because it takes money to bring them to life. Edison doesn’t have the money he needs to bring his inventions to life and is too proud to work for someone else which means that many of his inventions never see the light of day. Tesla wants the credit for what he invents which is understandable but without resources others will eventually catch up to his ideas and bring them to life because they have the resources to do so. 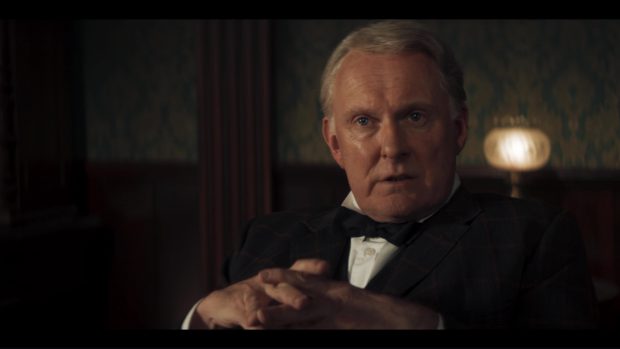 What I think the episode is trying to comment on is that creative minds often find themselves short changed by big business. Many will sell their ideas to those who have the means to bring them to life and then find themselves forgotten because another name ends up attached to them. On the surface it’s unfair but there’s a debate to be had over whether it’s better than not having the invention exist at all. It’s clearly important to Tesla to have his name attached to every item he invents because he takes great pride in his ideas and doesn’t want anyone else to be known for them but the consequence is that he ends up as a historical footnote while others later take credit for ideas he once had but didn’t have the means to make a reality. The Doctor comments that Tesla dies penniless after failing to achieve what he set out to do but she still encourages him to innovate as best he can because that’s his historical role.

I really appreciated the portrayal of Edison. He is an antagonist of sorts but a fairly complex one. None of what he does is for malicious reasons as his primary motivations are both financial and business related. Inventions make money and he wants to make a lot of money. When asked he acknowledges how brilliant Tesla is but also arrogantly boasts about how he’s the winner in all of this because he’s in a position to continue making money where Tesla isn’t. In the context of the episode, Edison is a temporary companion who briefly experiences the world of The Doctor and instantly wants to turn a profit on it. He’s well used and consistently characterised in a way that compliments Tesla’s story.

The Skithra are problematic as the episode spends too much time on the mystery that surrounds them which leaves little time to actually define the threat they represent. They can do a few different things which matches up with the idea of stolen technology but that is to their detriment as well because it’s impossible to fixate on any one thing as being a danger. I did like seeing The Doctor outwit their Queen (Anjli Mohindra) by tricking her into handling a device that would teleport her back to her ship as it reinforces the idea of those who steal ideas or technology not actually having any idea how it works. Anjli Mohindra did really well as the Queen under all the layers of prosthetics and makeup though never quite gets to the point of being threatening. The design was impressive enough -if a little too close to The Rachnoss Queen, though maybe that was the point- but the presentation was too over the top to be sinister. As threats go, The Skithra were a small obstacle for The Doctor rather than something to actually cause her problems. The Queen did manage to strike a nerve when asking if she had ever seen a destroyed planet, something she saw all too recently but that was accidental rather than by design. With some work the technology thief angle could have been enhanced to give them access to something really dangerous. 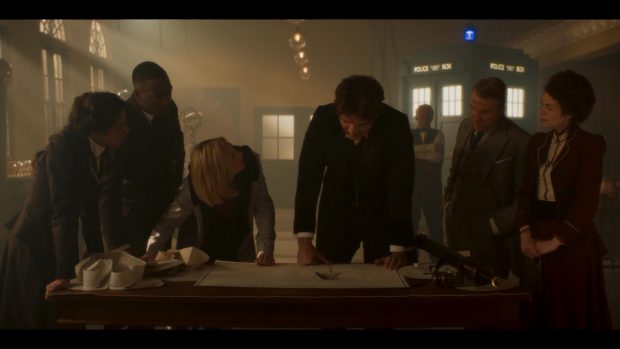 Time for a plan!

This episode was a reasonable one for the companions. Yaz is given some meaningful screen time with Tesla and further demonstrates her ability to conduct an investigation efficiently. She also conducts herself calmly when they are both captured. Her back and forth with Tesla was really engaging as well but I wish there had been more of it. Similarly there was the suggestion of an interesting dynamic between Ryan and Dorothy Skerritt (Haley McGee). Having them bond over coming from humble beginnings and becoming involved in something far larger than they ever thought they would be was a good start but there isn’t time for anything deeper than that. They had strong chemistry so there was a real opportunity to develop a strong connection between them that the episode doesn’t have time for. Graham is somewhat short changed though he had some great lines where he pretended to know more than he actually does. Taking it upon himself to keep an eye on Edison because he recognises him as the type who pushes himself forward on the accomplishments of others was a nice touch as well.

I get the impression that The Doctor is looking for hope in her adventures at this point. The destruction of her planet has deeply affected her so looking for distractions by travelling makes a lot of sense and the fact that she has been making a lot of speeches focused on change is really telling. Her speech in the previous episode highlighted what would be necessary to save the planet before it’s too late and her speech at the end of this one is about how the lack of recognition doesn’t diminish Tesla’s ideas. Taken together it appears as if The Doctor doesn’t want to see Earth destroyed and is highlighting the importance in thinking even if people aren’t prepared to listen to those thoughts at this point. She’s unable to save her own planet so it could be that trying to inspire radical change through motivating individuals is something akin to therapy for her. Adventuring has always been a distraction for The Doctor and this is no exception. 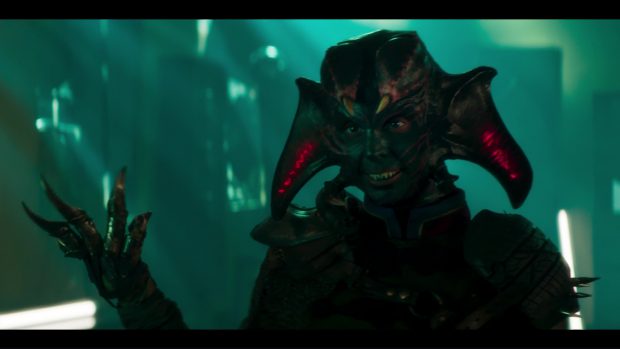 Scary or silly? You decide!

An engaging episode that pays appropriate tribute to Nikola Tesla while making interesting interesting points about ideas and opportunity. Nikola Tesla is really well handled in the episode with strong acting and a great dynamic with The Doctor who respects him greatly. Adding Thomas Edison to the narrative introduces the notion of ideas not being enough as resources are required to make them a reality. There isn’t the time or the inclination to fully explore that debate but it does sit underneath everything that happens. Edison is portrayed in a complex way and compliments Tesla’s story nicely as both an antagonist of sorts and a temporary companion. The companions are used fairly well with more opportunities for Yaz to show her ability to conduct an investigation efficiently and Ryan having a good if not fully developed dynamic with Dorothy Skerritt. Graham is somewhat short changed though is used well in his limited capacity such as his self imposed role where Edison is concerned.

The Skithra are problematic as antagonists as too much time is spent on the mystery that surrounds them which leaves little time for anything else. Connecting them to Edison as technology thieves and using them to make Tesla look better as someone who innovates was a really nice touch that connected the antagonist to the historical celebrity thematically. The design was good and Anjli Mohindra played the part well but the presentation meant that they never quite got to the point of being threatening.