“The Battle of Ranskoor Av Kolos”

Doctor Who closes out its current season with the return of a previously featured villain and a difficult situation for the Doctor to resolve.

The first episode of this season introduced the Stenza and their representative Tim Shaw -not his real name- as a threat for the Doctor to deal with. As antagonists go, Tim Shaw wasn’t bad but I had no burning desire to see him again as I felt he had been thoroughly dealt with in that adventure. His motivation was too flimsy for him to have repeat potential so bringing him back here is a somewhat bizarre choice. I suspect this was in aid of making the season feel as if it were building to something despite the episodes not being connected to one another outside of the characters. 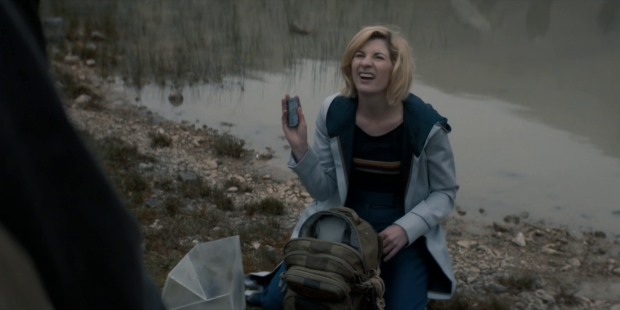 So much for “no weapons”

There are advantages to bringing Tim Shaw back. One of these is that his involvement left an impression through the death of Grace which has been in the background throughout. Graham and Ryan are both dealing with her death in different ways so having them face up to the person responsible is an easy yet effective way to create drama. Graham decides that Tim Shaw deserves to die for what he did and tells the Doctor that he’s going to make sure that happens. Naturally the Doctor objects to this and tries to appeal to his better nature by telling him that he’s better than that. When that doesn’t work she threatens him with abandonment because she doesn’t want to have those who kill by choice travelling with her.

Bradley Walsh’ performance in that moment was excellent. There was something eerie about how dispassionate he was in that moment with nothing that the Doctor said getting through to him. At that point I almost believed that Graham was capable of revenge killing which increased the tension massively. The Doctor tries to bench him by telling him to remain in the TARDIS but he refuses and she’s forced to trust that he won’t go through with his plan. Given the scale of the situation she isn’t really able to keep an eye on him and needs all the help she can get.

The episode keeps coming back to this idea during Ryan and Graham’s role in the plot. Ryan tries to talk Graham out of it by pointing out that Grace wouldn’t have wanted that of him because she always encouraged people to be the best possible version of themselves. The fact that Tim Shaw is capable of killing doesn’t mean that Graham has to stoop to that level because doing so won’t reverse what has already been done. Graham just isn’t ready to hear it at that point as he is so consumed by his desire for revenge that he can’t listen to reason. 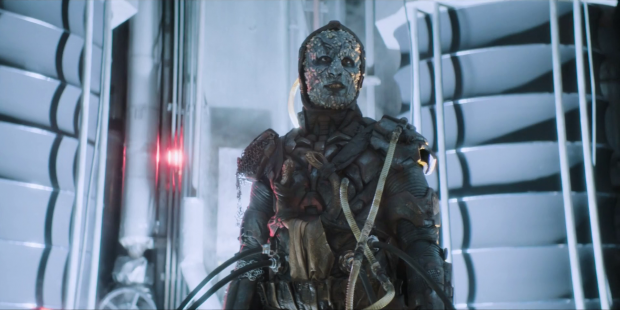 Not this guy again!

When he finally gets to confront Tim Shaw he proves himself to be the sort of man the Doctor thinks he is and doesn’t deliver the killing blow. Like the Doctor he finds another way and locks him up in a stasis pod which lets him spend an eternity knowing that he has been beaten. Arguably this is a fate worse than death but the ethics of condemning someone to an eternal sentence that has no quality of life aren’t explored. As far as the episode is concerned it’s the better option because it leaves Tim Shaw alive. This isn’t the first time something like this has happened on Doctor Who and I’d be interested to see this debate explored.

This resolution does something that previous eras of this show haven’t done enough of. The companions have a great deal of agency this season. Graham and Ryan decide to free the captives on their own and find a way to do so without waiting for the Doctor. Similarly the defeat of Tim Shaw is at their hands instead of the Doctor’s which makes sense given that they are more emotionally connected to him because Tim Shaw took away someone they both cared deeply about.

Outside of this fairly well told and self contained character arc this episode was a little too busy for its own good. Far too many things were introduced that didn’t really go anywhere. The idea of the planet interfering with minds and driving people mad through what it emits was interesting enough and only served to justify the drip feeding of information through characters who only had a vague idea what was going on. In terms of the main characters this meant very little because they were wearing handy devices to block this out. Yaz and the Doctor have to remove them so that they can be repurposes to solve the problem but the consequences of that were minimal. All that really came of it were a few headaches which really didn’t live up to the warnings earlier in the episode. One way to use this idea would be to have Ryan’s device fail and have him be the one holding a gun to Tim Shaw before Graham realises how wrong it is to kill and stops him. 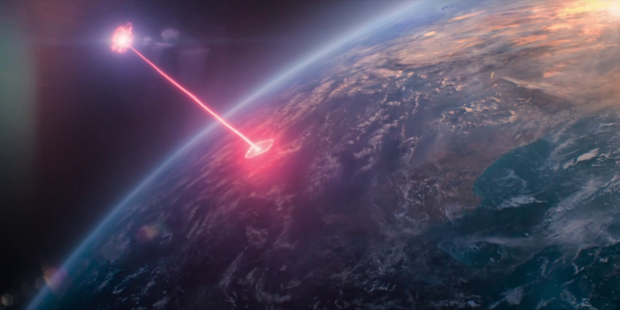 Another idea that received fairly limited attention is the stolen planets. Such a big deal was made out of the crystals and how baffling they were. The Doctor wasn’t able to understand what they were or how they worked yet the answer to the question was very underwhelming. They contained planets that had been stolen out of their orbits and stored in these crystals for vague and uninteresting reasons. Returning them to where they belong with apparently no consequences was fairly easy thanks to some sparks and technobabble. It was a very clumsy resolution that went from there being apparently no options that didn’t involve losing in some way to everything being fixable almost immediately. This sort of lazy writing made Doctor Who nigh unwatchable in previous seasons so this sort of story resolution deeply concerns me. Widespread planetary genocide is a problem worthy of a season finale but there was very little weight behind it as the episode didn’t spend any time letting the audience or the characters comprehend what failure means.

The side characters were fairly hit and miss. Paltraki (Mark Addy) was little more than an amnesiac tour guide to help the characters navigate the situation through his fragmented memories. Delph (Percelle Ascott) and Andinio (Phyllis Logan) fare far better as members of a species who only have two living members at any time. The logistics of that are somewhat confusing and definitely require further exploration down the line. They’re important to the story as they serve as a physical manifestation of the stakes; one of them doesn’t want to go through with the plan and the other feels bound by her faith to do what is expected. They have both been misled by Tim Shaw who has ingrained himself as a deity within their culture which has them blinded to what he’s really up to. The Doctor takes it upon herself to help them realise the truth which happens far too quickly for my liking considering how long they have believed Tim Shaw to be a God. It adds to the overall rushed quality of the episode but the characters themselves are interesting on a conceptual level.

This episode also contains both good and bad Doctor characterisation. Jodie Whittaker gets to deliver a couple of excellent Doctor moments such as her confrontation with Tim Shaw that ends with her saying “no-one’s unstoppable” and her appeal to Graham’s better nature. The bad characterisation comes from her casually talking about using grenades and Ryan confused about her no weapons policy that is shrugged off by her. This is something that demanded more attention as it makes her look like she has been dishonest with her companions before this point. Unfortunately the episode is far too busy to do much with this and quickly moves onto the next thing.

Yaz continues to be an issue. She accompanies the Doctor for the entire episode but doesn’t contribute in any meaningful way. Once again it comes across as the writers having no idea what to do with her as she has no real connection to Graham and Ryan so tends to fade into the background as a glorified assistant most of the time. It’s disappointing to see such a gifted actor like Mandip Gill wasted by having little to do in stories that have no room for her. 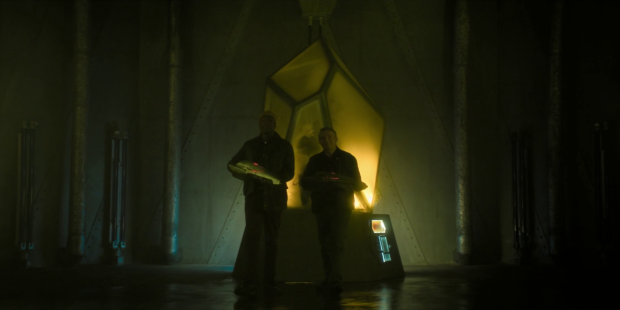 Is this a better punishment?

A frustrating episode that has some interesting ideas but is too busy to explore them in any detail. The return of Tim Shaw is a clear attempt to make it appear that the season has been building to something even when it hasn’t. He was barely a good enough antagonist for one episode so bringing him back is a really bizarre choice. It ends up being good for Graham who promises to kill him at the beginning of the episode and realises that he’s better than that by the end. It’s a strong arc that Bradley Walsh makes better through his performance. Ryan’s contribution to it works really well and their shared decision to lock Tim Shaw up for eternity is ethically dubious but works well enough in context.

The rest of the episode isn’t quite as strong as the episode fails to establish the stakes in any meaningful way. Stealing planets and widespread planetary destruction should be a bigger deal than the episode allows them to be but a lot of it is glossed over. The solution is little more than sparks and technobabble despite the attempt to ground it through the Ux and their differing views on what they were doing. There wasn’t enough time spent on any of these elements to have them explored properly so the end result felt like a confusing mess. Jodie Whittaker did get the chance to deliver some really good Doctor moments such as her confrontation with Tim Shaw but there were some confusing moments such as her casual attitude to admitting she lied about not using weapons. Yaz also continues to have very little to do further cementing that the writers have no idea what to do with her.