Doctor Who picks up from last week in London of the past as the Doctor and Bill investigate mysterious lights beneath the ice that cause disappearances.

Part of the introduction of a new companion is exposing them to the storytelling potential that this show has and exploring how they react to it. Bill has dealt with a present day problem, been to the future and now she gets to play around in the past. 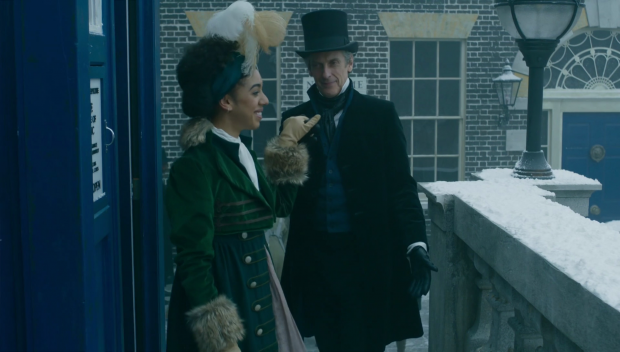 The Doctor and Bill blend in

One of the best things about this episode is that it spent a good amount of time focusing on how Bill feels about being in the past. At first she’s concerned because slavery was still rife in Britain at this point in history and she’s clearly not white but once she gets over that any fear is replaced with an infectious sense of wonder. The setting being London with the Thames frozen over works really well as it’s familiar to Bill while being completely alien at the same time.

The fact that Bill is a science fiction fan has been great for the show as it allows her to ask a lot of nerdy questions. We’ve had references to Back to the Future, Star Trek as well as other pieces of pop culture that use time travel but there hasn’t been a truly nerdy companion in the modern Doctor Who era. It’s great to see as it allows Bill’s imagination to take over as she asks more outlandish questions.

In some ways this episode reminded me of “The Shakespeare Code” in that respect as Martha was questioning the Doctor in a similar way. In that episode she is worried about changing the future and talks about killing her grandfather. Bill worries about stepping on a Butterfly and changing the course of history as a result. The Doctor responds by winding her up and mentioning someone called Pete who was erased from history. Bill doesn’t fall for it no matter how many times the Doctor mentions it. It’s a fun scene that shows how cavalier the Doctor can be about interfering with history. He encourages Bill to not worry about it in the same way he does.

An interesting observation is made in this conversation as well. Bill is worried that any choice she makes could radically affect the future and the Doctor points out that this is always true. The only difference here is that she vaguely knows how the future will turn out so is more paranoid about her choices. It’s an interesting way of looking at things as we all make choices in the present day based on several factors but without ever really know what the outcome will be until it happens. Unless Bill has committed every second of history to memory then the same applies no matter what year she’s in. 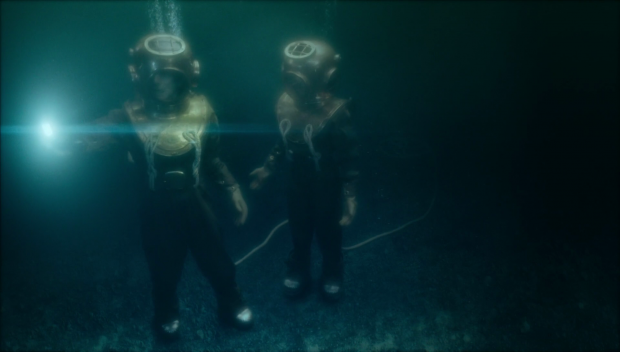 Let’s get to the bottom of this

This does pay off when they return to the present and Bill looks up the events. Some of it is captured and she does get to read about the long term impact of the events she played a part in but there are a lot of details left out. the Doctor mentions that humanity are very good at pushing aside what can’t be easily explained. It’s a sentiment that makes a lot of sense and has certainly proven consistent in this show.

The central mystery of the episode starts with strange lights underneath the ice that eventually get noticed by Bill who asks the Doctor about them. He noticed them a while ago naturally but was letting Bill enjoy herself and was waiting for her to catch up so that they could figure out their reason for being here. This continues the established trait of Bill being slow on the uptake at times but getting there in the end though this instance was likely more down to her being overwhelmed by getting to wander around in the past and see what it has to offer.

As mysteries go the episode missed out on making it as strong as it could have as the solution was essentially presented to us very early on. We see that there is some kind of creature beneath the frozen Thames so it’s pretty obvious that it is feeding on the people that disappear and the lights have something to do with that. If that reveal had been left until later in the episode then it would have been more effective as it would have felt less like we were waiting for the Doctor and Bill to catch up. I also felt that it was a little too similar to “The Beast Below“.

This is a minor criticism as the episode was still very entertaining. The Doctor and Bill make for an excellent pairing and their relationship is developed in really interesting ways. Bill is faced with death and this causes her to wonder about the Doctor’s previous adventures. She asks him how many deaths he has witnessed and how many people he has killed. The Doctor can’t answer because he genuinely doesn’t know. After over 2000 years he has seen and done a lot so has learned that he has to push certain things aside to be able to function. Death is one of them and he tells Bill that if he doesn’t move on then more people die. It may seem cold but it’s delivered with a tinge of pain and regret in his voice showing a lot of compassion. Capaldi completely nails the line delivery here and it shows that things are far more complicated than the simple morality Bill seems to subscribe to. It’s good that she values life so much as the Doctor definitely does but sometimes needs to be reminded of the importance of saving people. 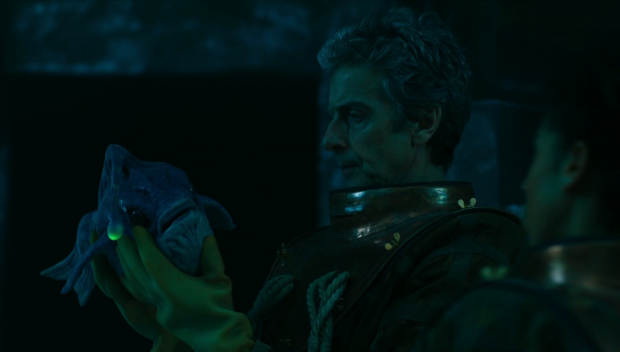 There were some memorable moments as the Doctor and Bill got stuck into solving the mystery. Seeing them going under the ice in old school diving suits was a cool image that fits this show so well. It’s so rustic and gives the whole thing a home made feel which fits the Doctor’s style perfectly. It’s also perfectly in character for him to go rushing into a dangerous situation because it’s the easiest way to find out the answers. If there’s something eating people then he gets himself eaten. It’s reckless, a little stupid but so perfectly in character for any incarnation of the Doctor.

The villain of the piece, Lord Sutcliffe (Nicholas Burns) doesn’t have an awful lot to do but I think that’s sort of the point. He’s a figure who isn’t worthy of the Doctor’s time because he is such a contemptible person. He sees himself as above others in society simply because he was lucky enough to be born into wealth. The Doctor can’t hide his disgust for him and punches him in the face when he exhibits racism towards Bill. It’s a shock to see the Doctor react so violently but it also shows how little tolerance he has for this sort of behaviour.

Peter Capaldi has the opportunity to deliver a really powerful speech that comes from the perspective of an alien outsider looking in at another species and it really hits the desired mark. He says “Human progress isn’t measured by industry. It’s measured by the value you place on a life. An unimportant life. A life without privilege. The boy who died on the river. That boy’s value is your value. That’s what defines an age. That’s what defines a species.”. According to the Doctor, Lord Sutcliffe has shown himself to be a barrier to progress because he disregards the lives of others as being unimportant. This speech hits a really profound mark as it taps into things going on in our world with regard to the treatment of people. Capaldi’s delivery is deliberate, measured and allows every word to resonate. In this case the Doctor is allowed to be a wise old Wizard able to deliver the perfect sentiment just when it is needed.

Lord Sutcliffe meeting his end at the jaws of the creature was a satisfying piece of poetic justice as he ends up meeting the same fate that he was forcing on others. It’s the fate he deserved and arguably the only way for the character to face justice for what he did. 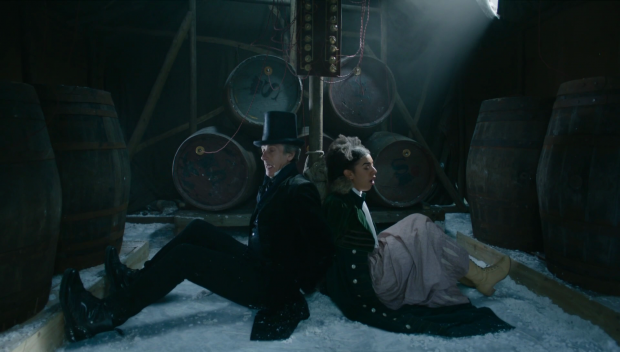 When it comes to solving the problem, the Doctor leaves that decision up to Bill. This calls back to “Kill the Moon” when he lets Clara make the choice because he has no right to make decisions that affect the human race since he isn’t a part of it. This has been contradicted on several occasions but I like the idea of the Doctor serving the human race rather than deciding what is best for it. He can supply his opinion but when it comes to making choices he’s happy to leave it up to the people that have to live with them.

The mystery of the vault is revisited when Nardole talks to someone or something inside that knocks on the door.He’s clearly terrified but stands his ground knowing that the prisoner is on the other side of a locked door. Nardole wonders what the Doctor has told whatever is inside or what it thinks it knows. My immediate theory is that it’s John Simm’s Master locked in there though the knocking pattern isn’t the same as the drumming he was known for. If that is the reveal then it’ll be somewhat disappointing as it’s a fairly obvious answer but we shall see. For now I like how this mystery is being teased as this supplies more information which makes it more than a bland reminder.

Another strong episode that further shows how great a dynamic the Doctor and Bill have. Bill being a science fiction fan allows her to ask more nerdy questions than we’re used to and generally look at things in a fairly unique way. The discussion of the butterfly effect is amusing because the Doctor winds her up about it until she realises that there’s nothing to worry about. I like that Bill looked up the events and saw how her contribution played out after she left.

The mystery itself wasn’t all that compelling mostly because the bulk of the solution was given to the audience fairly early on so it felt like the Doctor and Bill were trying to catch up. Watching them try to solve it was entertaining enough and gave us a scene where they went underwater in old school diving suits. The villain of the piece, Lord Sutcliffe doesn’t have much to do but that’s almost the point considering how contemptible he is. He is seen by the Doctor as a barrier to progress and he gives a really powerful speech to explain the reasons for this. The vault mystery has a little more information dropped and it’s really compelling so far. Nardole’s terror adds further intrigue to the whole thing. 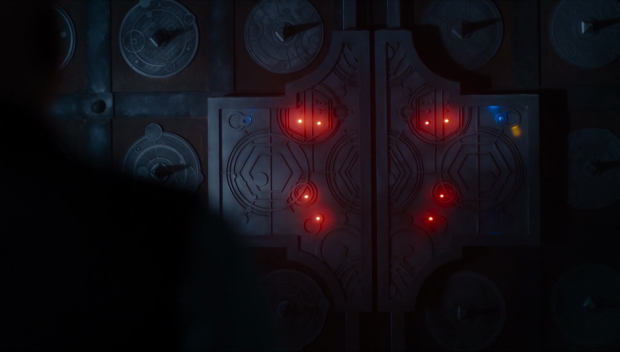 The occupant is restless