“Heroes Rise: All Will Be Judged”

It feels like last week’s episode of Gotham was more of a setup for this week’s rather than something I could enjoy on its own merits. This week the strength of The Plot Force (the force that makes characters make out-of-character or silly decisions to suit the needs of the episode, scene or joke) seemed much reduced, afflicting perhaps only Barnes. And nervous as I was to see how Gotham would follow up on ‘Light The Wick’ I found both this week’s opening scenes to be satisfyingly strong. 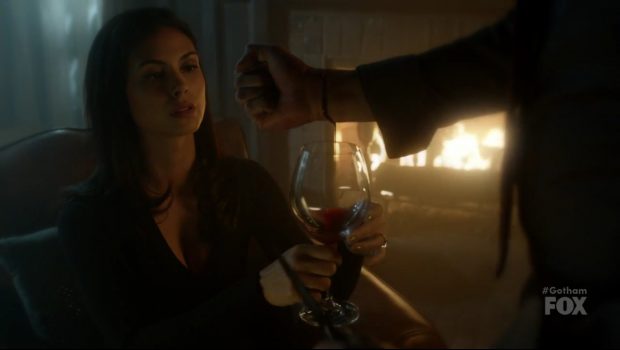 ‘All Will Be Judged’ also provides some much needed purpose – or clarity thereof – to both Lee and Jervis Tetch. Tetch had no impact on events last week but now gets to push Lee over the edge. I’m not sure I could buy into the whole ‘I poisoned your husband to make you hate Jim’ thing as an up-front, purposeful plan. However, I can definitely believe that Tetch would take the opportunity to torture Lee into believing it, matching the manipulation of Bruce we’ve been watching.

Still though, did you accept that Lee had been pushed so far that she would actively inject herself with Alice Tetch’s blood? For myself I’m stuck at thinking it probably should have worked it’s just that I’ve struggled to connect with her this season. I’ve found it difficult to get on her side ever since she so willingly joined the Falcone family without challenging papa Falcone about his ways even once. She was such a mature and capable character in previous seasons but now is heading towards being a wronged gangster’s moll.

Nonetheless I am quite won over by the episode’s big reveal that Bruce’s training has all been a lie. I would have been underwhelmed by Bruce suddenly becoming a proto-Batman after just a couple of episode’s false spirituality and spell casting but I was completely behind it all being a trick. I could never have believed that locking your pain away was enough to turn Bruce into a superhero but it being the necessary preparation for a little magical hypnosis? That works very nicely. 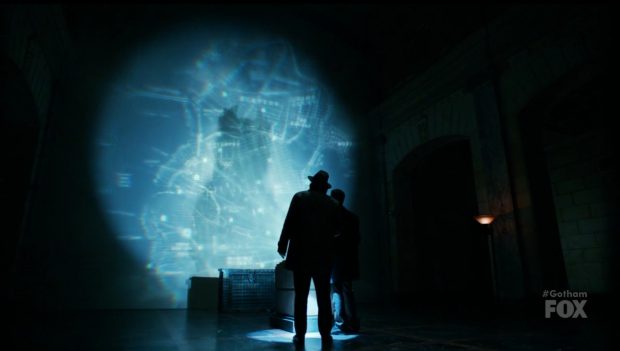 We’re still to find out why the not-Ra’s-Al-Ghul shaman wants his revenge on Gotham City but that could easily slot into next week’s plot. Here I wish I knew more of the Batman canon. Is this idea of being empowered by revenge true to the caped-crusader’s comic-book origins or more of a parallel to Batman Begins? Not that this greatly matters but the knowledge might give me more of an insight into how truthful the shaman’s vision of his disapproval of the Waynes’ killing is. It was used to trick Bruce of course but was it based on something that happened to the shaman or his family and so the cause of his need for revenge?

Satisfying as that reveal was I’ll award my favourite moment of the episode to a partnership that I realise I like to see even more than Selina and Bruce: Selina and Alfred. The fight scene between Selina and Clone Bruce was powerful enough but the one between Alfred and Clone Bruce was all the more engaging just because it didn’t have Alfred holding back. I like to see a good trope dodged and Alfred could separate the two Bruces in his mind for the fight, focusing on his base need: the safety of the real Bruce.

But again, Selina and Alfred tops even those highs. They long had trouble reconciling their different connections to Bruce and what makes their fights so powerful is that they’re both arguing from a believable perspective, grounded in their interactions with Bruce, never just the needs of the plot. (Yes, I’ll never give up on this.) Plus, the “you’re just like your mum” delivery from both Sean Pertwee and Camren Bicondova hits home such a perfect verbal slap. 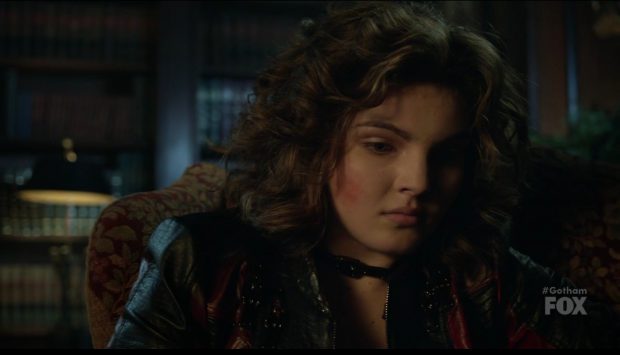 All in all this episode does very well to bring the focus back character relationships. Most notably of course with the buddy movie I said I wanted back in season 2, albeit in a completely different way to what I could have predicted. I could find no fault in any of the Ed vs. Oswald scenes: Oswald’s constant use of ‘Ed’ over ‘The Riddler’, the bickering and infighting, and rules that will allow them to kill each other later – it was all darkly funny from the start.

It was only a shame it had to end when it did. I would like to see more of Penguin and The Riddler going at each other in a way that isn’t just sending their armies to fight. Given the history between them now, competing super villains is something I’m very interested in seeing.

Mention this week, I think too, must be made of Harvey Bullock. Even his jokes seemed to fall a bit flat last week but here he’s right back on top form. I like to see him as more than just a sidekick for Jim and so it’s great to see him call out Kathryn’s stupidity at using her own building for her secret plots in such an easily traceable way. Plus, I found his jokes funny again this episode, charming in such a way as to even cover up the ridiculously easy find that was the secret door and the secret door’s secret opening panel. I felt for him being overwhelmed by all the goings on but honestly, can he really say it’s never easy when it sometimes really really is? 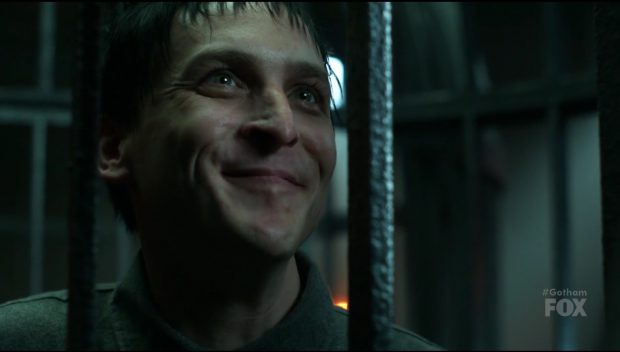 Mostly then this is a good episode, spared of much of last week’s strange or random character choices that can only have been useful to force the plot to this point – with the exception of poor Barnes though. Michael Chiklis gave such a great performance as Captain Barnes I find it difficult to enjoy The Executioner’s appearance in any way. Where he used to give us a counter ideology to Jim’s failing belief system he’s now just a meaningless parody of one or both. I can only hope for Chiklis’s sake the role is fun to play.

At the very least I think The Executioner should have been allowed to keep the unstoppable rage the virus gave him. This explained why a thoughtful character could get so carried away with a broken idea of true justice. The rage needed to go though, so that The Court of Owls could control him. Fair enough he’s still insane but if his madness is now so controlled why can’t he think round the oddity that is him taking orders?

The Court says they believe in order above all things but why should Barnes take them at their word given that he judges everyone who makes even the slightest transgression guilty? It was long overdue when he killed Kathryn and inexplicable that he didn’t try it at every previous meeting. At least he had the decently to look ashamed when Jim calls him on it all. 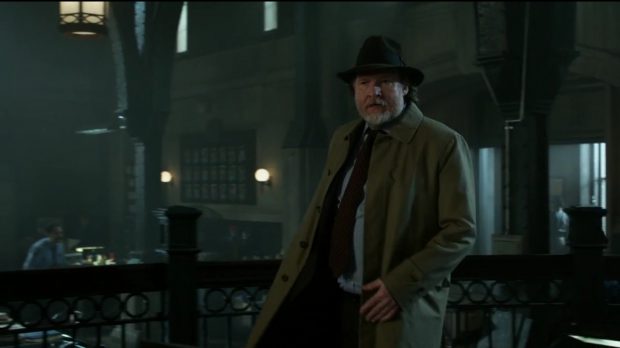 “I know this is Gotham but somebody do something!”

The Plot Force never dies it seems. It stops an ex-SAS serviceman shooting for an armoured opponent’s unshielded head. It makes The Executioner set up a courtroom that doesn’t actually run any parts of a trial. It… Well, I think I’ll just be grateful it was contained around just one character this week.

‘All Will Be Judged’ is a return to the just-the-right-level-of-crazy good form that Gotham was sustaining before ‘Light The Wick’ went off on one. Harvey’s funny again, not-Ra’s-Al-Ghul has believable purpose and who can get enough of Selina vs. Alfred? Even Gotham’s customary speed adds something to the episode, giving you a feeling for just how overwhelmed Acting-Captain Bullock must feel as problem after problem wells up from Gotham’s dark depths.

Despite this I can’t say that the episode is one of the season best however. There’re still things like Barnes not being consistent with who he was set up to be and the overly-simplified reveal of the barely-hidden door control for the barely-hidden secret door in the barely-hidden warehouse that make me want the cleverer plot of Gotham’s best episodes.