Gotham finally gives Michael Chiklis something to do in season 3… by turning Barnes into Judge Dredd, replete with “I am the law” quote. Now, I’m assuming the actual idea is to make him into a villain called The Judge, possibly based on judge characters from the comics? My knowledge of Batman canon here is only as good as my Google skill though, so you might steer me right here. Either way, I think there’s only Barnes’s madness that makes much of a distinction between him and Dredd at the moment. 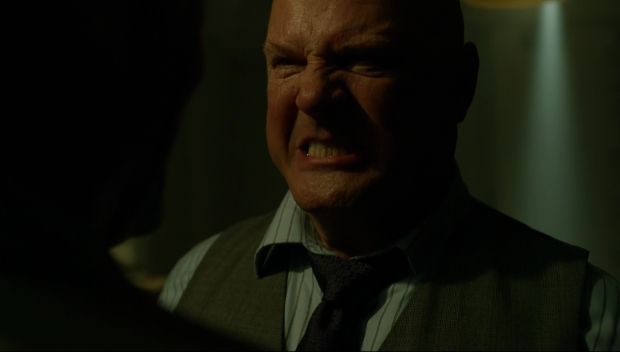 I am the (very angry) law

Nonetheless, Barnes’s scenes this week are a well-crafted treat throughout. Gotham’s presentation is probably one of its strengths, so when there’s also substance behind the showiness, we really see something worthwhile. Several times previously I’ve picked out the gorgeous imagery the show uses; this episode I was very drawn to the sound – in particular the sinister heartbeat that speeds up with Barnes’s growing rage in the opening scene and the screams of Arkham punctuating Barnes’s interview with Tetch. Taken together they all add up to a perfect description of the conflict going on inside Barnes that’s causing him to slowly lose control.

Then of course there’s Michael Chiklis himself. I am by no means the first to think that this season his acting ability hasn’t been tested by the plot Barnes has been given. In fact I was quite disappointed in ‘Anything for You’, when the captain has to respond to an escaped criminal with a nothing “damn!” and hand slamming his desk. Gotham may have a massive cast that means not all characters can get a lot of screen time but surely when you’ve paid for an experienced, well-known actor you have to use them well? Not give them melodrama?

In ‘Blood Rush’ I think we’re finally seeing Chiklis getting something to make a proper performance with. Obviously there’s Barnes’s rage but noticeably he gives a lot more than just that, often with a welcome subtlety. One example would be the almost completely different voice he uses to show his grateful response to Jim’s entrance that stops Bullock describing Barnes’s victim. Another would be the gentle voice that promises to catch the cleaner’s murderer tomorrow, suggesting well beforehand that Barnes wants to get his affairs in order before he hands himself in, ever willing to put the law first, no matter what. 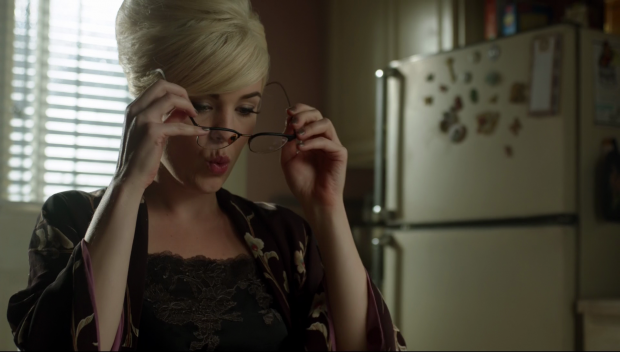 Do, de, doo – where did I pick up these glasses?

I’d always thought – or perhaps hoped – that Barnes would be an influence on Jim. On first seeing the new captain I’d thought he might provide a light that would draw a lost Jim back onto the path of right or that perhaps he’d be an example of the wrong that can happen when you stick too firmly to the letter of the law, over the spirit. Instead, I think Barnes is going to be a literal incarnation of Jim’s struggle not to become a monster.

Alice’s blood seems to be running riot within Barnes now and presumably Symon the surgeon won’t be the last victim of Barnes’s rage. Perhaps Jim will get a chance to save Barnes by talking him down somehow, perhaps as Lucius in his new role manages to find a way to build a cure after all. This could work out as a nice parallel plot to Jim’s inner demons. I’m not quite sure how it would work out, as Jim seems to be on the path to redemption already, but I’m interested enough to keep a watchful eye.

One of the better outcomes of Barnes’s troubles is that someone finally confronts Falcone about him being a criminal. I still can’t believe Barnes is OK with Lee marrying into a crime family – enough not to even bring it up once. Finally here he calls Falcone out: Falcone should be behind bars. Is this going to go somewhere? Are we going to see The Judge go after the so-called retired crime boss? Will this show me what Falcone’s current power base is built on, given that Penguin now runs Gotham City, above and below? Money I suppose, but it still bothers me that a crime boss can simply retire and not be a problem for his successor. 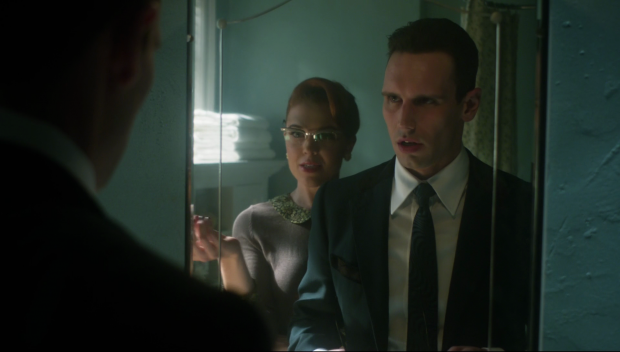 Nope, you are definitely not cured

The quality sound work that so nicely accompanies Barnes’s scenes and that adds extra feeling is also present over Nygma’s appearances. I particularly liked the building tension and sudden stop that plays over Nygma’s Kristen Kringle hallucination. Plus the scene is a nice reminder that no matter what his paperwork says Nygma is not cured. His criminal obsession with a female victim – perhaps because it was built over a longer period – seems much better than Tetch’s brief foray into serial killing. And I think I preferred Tetch as he is this episode, where he expresses love for Alice through a person infected by her blood. It’s creepier and also makes him stand out as a villain.

I still can’t make up my mind quite what Nygma’s new obsession Isabella’s motive or plan is. I’m sure she’s a trap somehow but is she working for Butch or the Court of Owls or is she a relative of Kristen come to enact revenge on Nygma? Whatever her motive is, I’m quite certain she hasn’t been killed in the car accident for a couple of reasons. The first is simply that I believe her existence is a setup – that she’s going to lure Nygma into some compromising situation somehow. The second is the comic turn the whole affair has taken.

Penguin’s little games and the back and forth he and Isabella are now having over Ed started a little schoolyard this episode and then really embraced the silly when Isabella’s breaks fail just as she approaches a rail crossing. She didn’t swerve to avoid the train on camera but surely we’re going to see her having done so next week – Rocketman style – just looking slightly dazed as she stands before her car wrapped neatly round a lamppost. 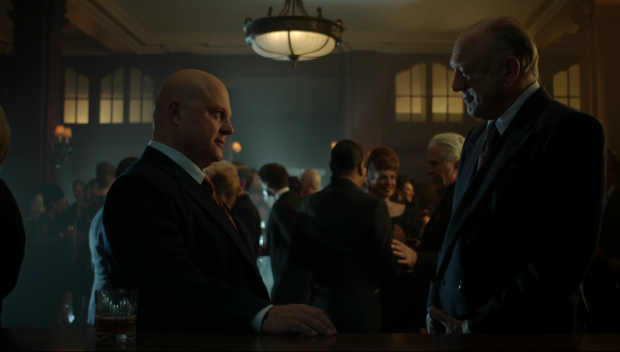 “You belong behind bars.” “I’m retired.”

Fortunately, the silly is outgunned in ‘Blood Rush’ by the serious and Bullock’s humour is back on hand to keep the humour grounded. I was fan enough of “I thought he might be at the bar” but Bullock’s “makes you realise what a small town Gotham is” line was even more welcome. Self-referential jokes can be a risky business – proved most recently by young Jean Grey’s joke in X-Men Apocalypse. For me though, Bullock is the right character to get away with almost any cheeky joke.

Probably I shouldn’t consider this review complete without some mention of Jim Gordon and his love problems but honestly I wasn’t that bothered with it all this week. Lee shouldn’t have come back to Gotham, blah, blah. Mario has every right to be jealous, yadda, yadda. Wheel out Barbara for some insight into Jim’s psyche and so forth. It’s not that there’s no mileage here it’s just that ‘Red Queen’ did it so much better last week.

Giving Barnes something to do is something that season 3 has held off on for far too long. Now it’s here I’m pleased to see it, if only because Michael Chiklis has the skills. As it is, the music department really adds something to this episode and make Barnes’s scenes even better. 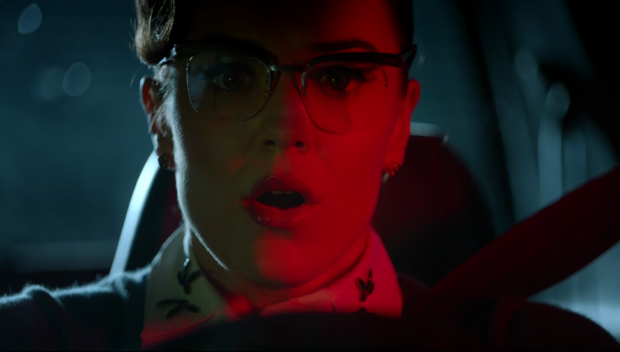 Nygma’s plot almost lives up to the bar set by Barnes’s but the ever-increasingly silly comedy building between Oswald and Isabella is in danger of bringing the affair down.