Love is still very much the theme in Gotham this week but whereas last week was virtually a Valentine’s Day episode, with everyone’s love life getting some screen time, this week it’s focused onto Jim and Oswald. Part of me is slightly glad of this as I feel I may have been a bit harsh on last week’s plot, maybe undervaluing Bruce and Selina’s kiss, which was a lovely scene. And so, making sure not to bring my darkness with me, I’m glad of a second shot at considering love in Gotham City.

Certainly I want to start with Oswald and Ed. They weren’t given much screen time this week but it was still good to see that the potential love interest between them hasn’t been forgotten. Even more intriguing though, is how Gotham is treating this single-sex relationship. It might even give me cause to rethink how I’ve perceived Barbara and Tabitha’s connection, which is very interesting to me. 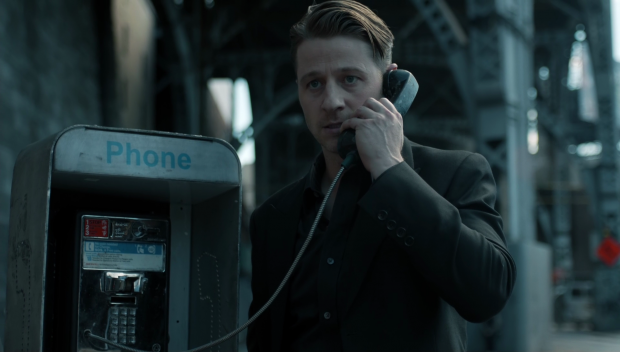 On reflection, I don’t believe Barbara or Tabitha’s sexuality has been labelled. Barbara has had liaisons with Galavan, Jim and Tabitha, and Tabitha with Barbara and Butch. I don’t think that in any of these connections though, either character has been labelled as bi or their single-sex liaison as lesbian. All of a sudden then I’m realising how good Gotham’s presentation of sexuality has been: without labels there’s complete acceptance.

Whether this makes it better or worse I believe I’ve been blind to this because I’ve always thought that Tabitha hasn’t been given enough to do as a character. She’s been a sister to Galavan, a love interest for Barbara and otherwise just a hot woman kicking serious backside – the former two defining her as part of other people and the latter being an over-used stereotype. Worse, I’ve often had the feeling that the only reason Barbara and Tabitha are together is because someone thinks that pairing hot women together is somehow necessary or cool.

Nygma and Penguin though, I’ve always thought were better constructed characters and so I might be able to see what’s going on with them more clearly without any bias blocking my thoughts. Watching them interact in a romantic way the last two episodes I found it much easier to see that neither’s sexuality has been labelled. They’re just interested in who they’re interested in, gender never mentioned. 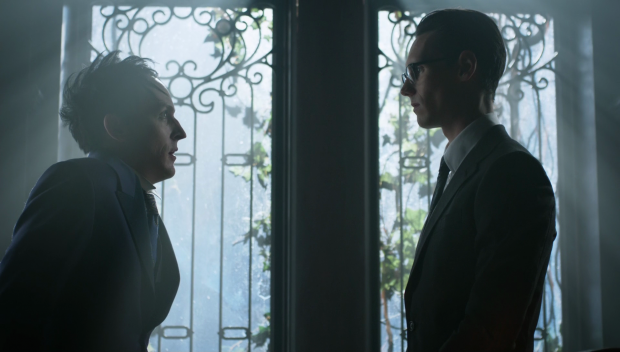 A love perhaps doomed to fail

I’m somewhat stunned by this revelation but equally I acknowledge I’m very late to the party. I’m going to have to keep my eyes more open in future. Where previously I’d thought that Barbara and Tabitha had a good relationship just because a lesbian connection needed to work onscreen – to pander to some faux political-correctness – now I think it might always have been a good relationship because it was a good relationship. And so poor old Oswald might be heading to disaster just because not everything works out well in matters of love.

Many people will have had the horrible experience of being attracted to someone who didn’t feel the same way. Now it’s possibly Penguin’s turn. I’m slightly bothered by the sheer coincidence of a riddle-loving woman who looks just like Kristen Kringle turning up at this moment. However, maybe Butch has learned from his previous games of chess with Nygma and found a weakness to exploit? Or maybe it’s the Court of Owls? Either could be really interesting. Nygma may well have romantic feelings for Penguin but I could imagine it would be extremely difficult to deal with a criminal obsession.

And speaking of criminal obsessions with women, re-enter Jervis Tetch, now completely the Mad Hatter if he wasn’t already. Fresh from the rather ridiculous impaling of his sister, Mad Hatter briefly toys with the idea of becoming a serial killer but is quickly forced to forget this idea because of the needs of Jim’s plot. Perhaps he’ll get back to it later, or perhaps he’ll just fill his lonely hours with it whilst he’s waiting for his next opportunity to force Jim to consider how twisted he’s become. Honestly I could have accepted either plot idea well enough but Gotham’s ability to travel quickly through its plot will have reached supersonic levels if the serial-killer idea just gets used for one scene. 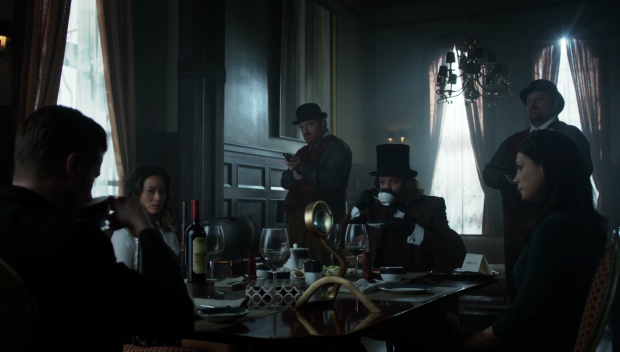 That said, I still really enjoy Benedict Samuel’s Mad Hatter, certainly in both presentation and in delivery but also in plot once he’s allowed to settle into a single mad scheme. It’s fun to have him quote the white rabbit, create Alice in Wonderland characters with hypnosis and have eerie fairy-tale music play over his speeches. And Samuel plays a delightfully insane villain, using moments of both calm and passion to convey his disturbed character.

I do think he was let down a little by the writing of his evil schemes though. I couldn’t help but think of Willem Dafoe’s Green Goblin in the Sam Raimi Spiderman film when he says “This is why only fools are heroes – because you never know when some lunatic will come along with a sadistic choice. Let die the woman you love… or suffer the little children?” Now, I’m not saying that Gotham stole an idea here, it’s just that the show is really channelling its inner comic book with this – let’s say ‘traditional’ – evil villain scheme.

I have the same problem with Mad Hatter having found Mario Falcone’s gun in the house before the tea party. True it’s not impossible for him to have found the gun and to have an empty cartridge ready to load into it but the likelihood is surely low? And with it happening off screen it’s all so reminiscent of afternoon-TV murder mysteries were the hero solves the case with new information that no-one else, including the audience, knows: No-one in the audience ever responds to that little cheat with “oh, that was so clever”, it just goes by with little impact. 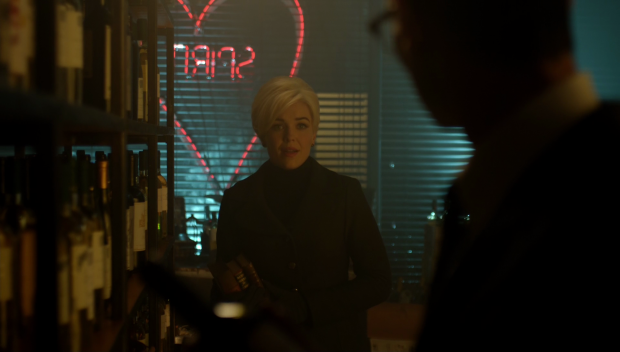 Is someone setting up the Riddler?

The sadistic choice and finding of the gun then, just aren’t very clever – perhaps just not very elegant. And I know that Gotham is capable of this because of scenes like Bruce and Selina’s kiss last week, like Bruce tackling the Court of Owls – like Gordon taking control of negotiations with Mad Hatter.

In the first instance of this where Jim keeps hanging up the phone it would probably in reality be a bit risky to play with a terrorist so, but it was certainly entertaining to watch. In the second instance, Jim’s purpose is to refocus his enemy’s anger upon himself, so riling up Mad Hatter may well have worked. Either way, again a very enjoyable scene to watch, especially as there’s no clever out for Jim and eventually he’s forced to make a horrible choice. Even better, that choice will hopefully have some serious choices for Jim in future episodes.

It’s somewhat unfortunate that Jim’s choice could never really have ended in Valerie or Lee’s death – or at least that’s my perception of the setup. Falcone surely can’t be going away soon and Valerie’s not really done that much yet, and Gotham has never been the show to kill a good guy to upset the audience’s state of mind. Sure enough then, Mad Hatter shoots Valerie in the belly – not in the head or the chest – a serious wound perhaps but allowing her to survive. 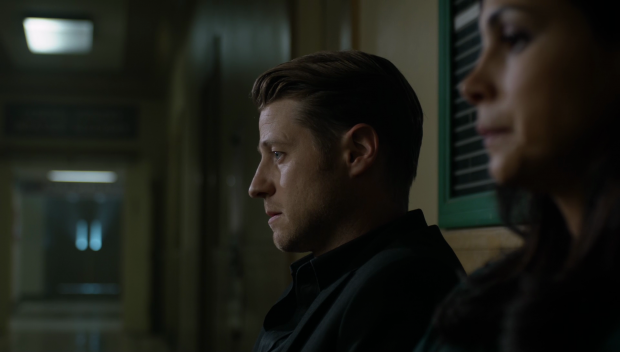 Ultimately the dinner party was mostly a good scene but somehow the thought that no-one could really die in it robbed it of real threat value. Killing Valerie might have added threat value back into villainous schemes. We’re all expecting Valerie to lead to Vicki Vale at some point – a daughter? But Vicki could be a niece and so her aunt doesn’t need to survive?

The more I reflect on ‘Follow the White Rabbit’ the more I get out of it – but there’s still a limit. Gotham’s treatment of character sexuality is far better than I’ve ever given it credit for but it took a second shot to get passed some stereotypes. The Mad Hatter is delightfully and horribly insane but he still gets roped into some afternoon-TV plot twists. Jim’s horrific choice was a gripping one but how dire will the consequences really be?