“Heroes Rise: How the Riddler Got His Name”

So Gotham is set to finish season 3 with a rising force of heroes to counter the preceding Rise of the Villains. But this would appear to be a promise at this stage, given that the latest episode focuses so much on The Riddler – unless Lucius is to become Batman…? No, obviously that’s Bruce given the recent internet talk of Alexander Siddig taking the Ra’s Al Ghul mantle and Bruce’s ‘trip’ to the mountains. And Jim Gordon, often the mortar that links all the plots together, is also shipped off and out of the way this week – on a country retreat for a chat about the future, leaving Bullock and Lucius to fill his usual role. 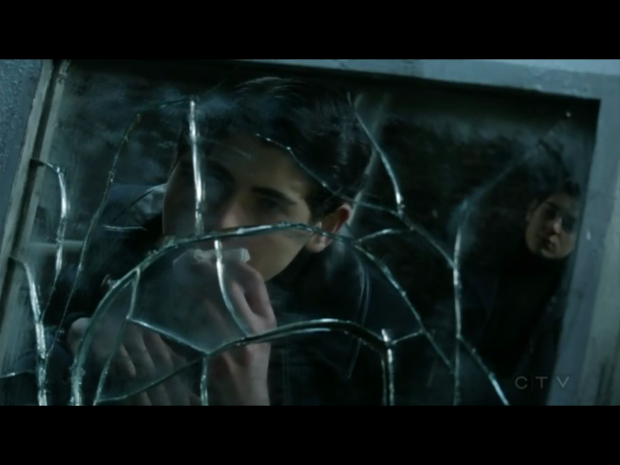 And so it begins…

Heroes out the way then, Mr E Nygma is afforded the opportunity to resolve his identity crisis and properly become The Riddler. In turn this also gives Lucius ‘Foxy’ Fox some much needed purpose, though at an all too common cost to a Gotham character that I didn’t like to see paid.

True to comic-book form Ed tries to replace Oswald as his defining influence with a good enemy. I wonder if the Gotham universe has its own comic books or if it’s more that there’s just something in the universe’s base physics. Silly thoughts aside though, this is consistent with the universe Gotham has set up and seems like a perfectly reasonable thought process for a distressed Gotham proto-villain to go through.

It’s also wonderfully supported by Nygma’s form of madness. I don’t know enough to comment on whether his confused anger is a realistic form of insanity but it is good to see madness represented as something other than the stereotypical nonsense in TV that is people dancing around making wacky, meaningless comments. And I was very much a fan of all but one tiny part of Cory Michael Smith’s delivery of it. 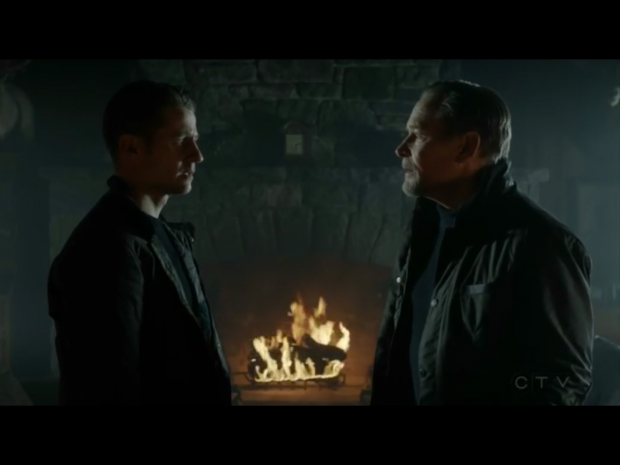 Trust me, I’m your uncle

I was a bit unsure about using Oswald as a hallucination at the start but the musical episode (or one done at Gotham’s customary pace) was pleasant and purposeful enough. Plus, Oswald was used to cut through the jungle of potential tropes at good speed – I am in your head, these are your fears and no you can’t replace me with some desperate ploy – that it didn’t feel like exposition, seeming instead to keep us on good track.

Lucius’s treatment though, did give me cause for concern. He’s most definitely been completely underused so far. I think I remember rightly that he spent a few episodes as a stand-in GCPD ME but I really struggled to remember what his job is after Lee’s return. Finding his entry on the Gotham Wiki though amused me though: “Expert for everything scientific”. Sure, why not?

Even in these roles though, he’s just been a plot device to reveal some information. But as a foil for The Riddler? As someone who can go head to head intellectually (as it were) with Nygma, now that’s interesting. And his theoretical approach to interview techniques was brilliantly charming in partnership to Harvey’s brutal straightforwardness. 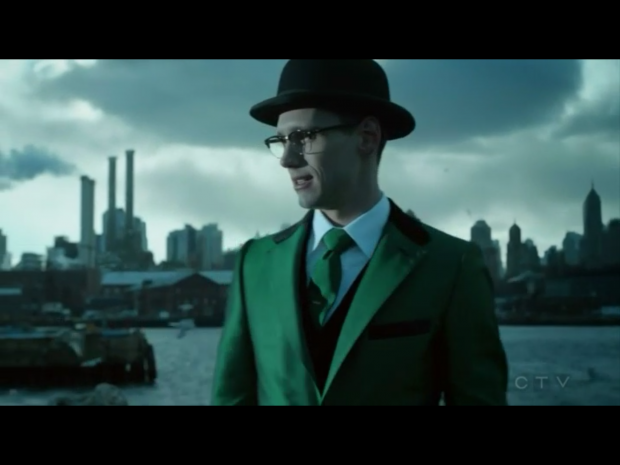 The last nice suit was nice… but this one’s green!

But at the crucial moment when Lucius and Nygma come face to face why did Lucius suddenly lose his intelligence? It’s another example of a character being compromised for the sake of the plot. Clearly it would have ruined the setup of there being three ropes if Lucius had gotten the first two riddles correct – how could we get the tension of the third rope stretching otherwise?

Thing is, in every previous instance of Lucius being faced with one of Nygma’s riddles he’s solved it instantly with no problem. Even with the snowflake argument Lucius’s intelligence is taken off him to some degree for the sake of the plot. Couldn’t instead this intelligent character have been preserved as he was set up? Could it perhaps have been funny that he solved the first riddle of the three instantly, forcing Nygma to rely on some plan ‘B’? I admit Lucius was clever enough to work out Oswald’s apparent murder but wouldn’t he be a better nemesis if he was always up to The Riddler’s game?

I really hope Lucius gets to be one of the heroes of the new arc title and gets to properly go up against The Riddler. Him not being a main character, should I get my hopes up though? Perhaps I need to be satisfied that Bruce’s training is presumably really going to step up now. 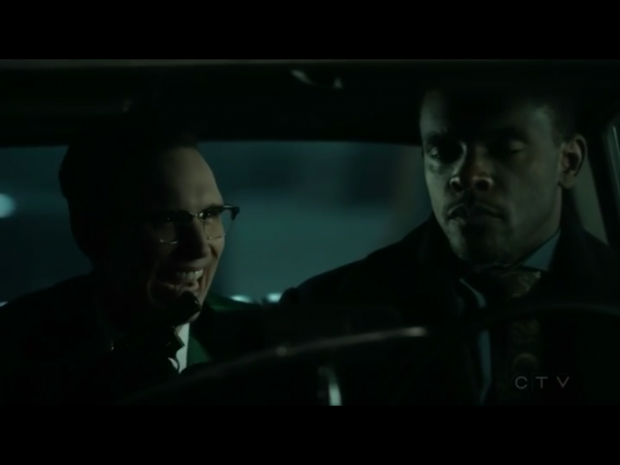 Clone Bruce is really not going to be fun for me to watch. That’s a personal issue though, so I won’t write badly of it here. Nonetheless I hope we can quickly skip passed too many “oh, how could you say that to me Bruce” fiascos and other mistaken identity tropes. I can’t quite bring myself to think that Clone Bruce is a necessary evil to keep Bruce’s plot alive whilst he’s away but if it is then it’s a price I’m prepared to pay to see Alexander Siddig as Ra’s Al Ghul – how amazing is that going to be by the way?

Funny episode this one. Oswald and Frank Gordon’s exposition moments in theory might have bothered me but actually they seemed to fit into the script perfectly well. The arc title ‘Heroes Rise’ doesn’t really seem represented in the episode but the naming of The Riddler was good plot that arguably gives Gotham City its first real super villain. Ultimately I think Gotham moved on as it has in its good if not best moments.

As ever, there’s still been the promise of interesting plot to come. Can we trust Jim’s uncle? I can’t get a complete read on his motivation and plans yet but that’s a good mystery element. And what will Penguin and Ivy get up to together? Penguin’s getting better at surviving the fall off a dock whilst a gun fires – even taking the bullet now.

All could lead to good things… though I will say I still hate The Riddler’s Christian Bale voice.