“Mad City: Look Into My Eyes”

I feel that Gotham has now succumbed to the influence of those people who believe that “because the plot needs it, darling” is a good reason make a character do something – worse, something that seems quite out of character based on what we’ve seen so far. I can never agree. If the new plot is that interesting then surely a clever way into it would be just as entertaining for the audience to watch?

Gotham does like to move quickly, I acknowledge that – and that season 2 showed that this has not always been bad – but still I feel that there’s a great danger that marked shifts in character come across like a child crying out “I want to play with this now”, despite what his friends may want. Worse still, how can I get to like and understand a character if I feel they might just be shifting with the plot’s prevailing wind? 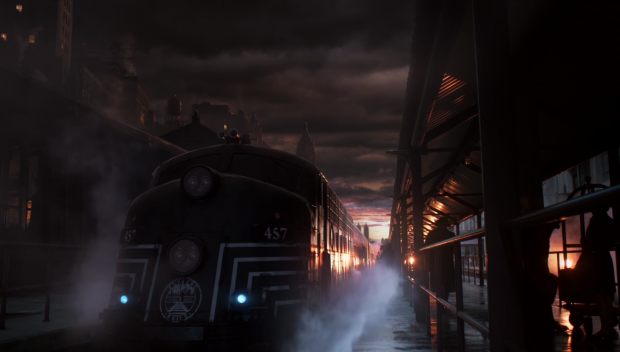 Gotham is still so pretty

Bruce’s treatment of Selina is the best example of this problem – i.e. the worst of all the plot compromises – in my mind. He pushes his clone out of the door when Selina is approaching, saying “she won’t understand”. Ridiculous! Clearly his action is only necessary in order to set up the mistaken-identity trope plot that I really thought last episode had so cleverly dodged.

Why wouldn’t she understand? She saw what Strange did to her friend Bridgit, she’s walked with monsters in CuttleFish Mooney’s new army, hell, she’s lived in Gotham City – that alone should qualify. I imagine her response to Bruce’s clone would be: ‘so Strange made a clone of you, huh?’ Welcome to the new normal.

Even worse than this we’re perhaps not going to dodge the love triangle Bruce-Selina-Clone-Bruce either. The bar was set pretty high with the Selina-Bruce-Silver triangle, which I still say was by far more interesting and plot relevant than any of the adult love messes. I’m afraid I’m quite confident that Bruce-Selina-clone-boy will limbo under that bar with little difficulty.

OK, so you maybe don’t react as badly to either of those things as I do, fair enough. But what about then, the blatant theft of the Dexter incidental music that plays over Clone Bruce’s creepy moments? To a certain extent this bothers me even more than the rest because style is something Gotham has always been so good at – still is in fact. I’ve used a picture above of Lee’s train arriving into Gotham City. It’s a great shot. It’s so pretty, just like pictures of Arkham and so on that we get treated to each episode. Even if I occasionally accuse Gotham of style over substance I still have to acknowledge that continuously great style. But now the show has ripped off someone else’s music? Disappointing. Who gave up and went home? 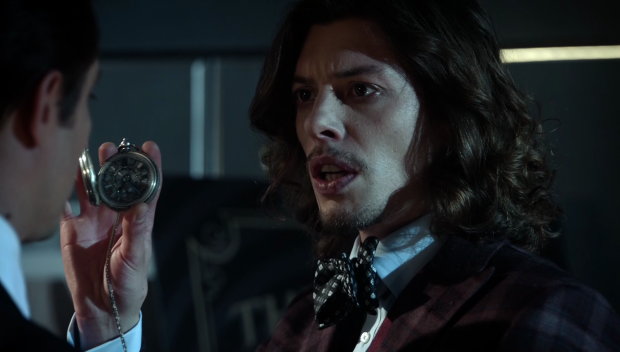 The only good thing I have to say about Bruce’s clone now is what it might imply about the Court of Owls, who I hope Bruce goes up against as well as he did last episode. The clone seems readily compliant, suggesting perhaps that they intended to replace Bruce with someone they could more-easily control. It’s a basic plot idea but would give Bruce a decent threat to deal with that would force him to face again the people he’s promised to leave alone. Conversations skirting around the deal – “well, we haven’t actually broken the agreement yet” – might have been quite entertaining.

Perhaps we’ll see some interesting plot from the Court of Owls through Penguin now though. Whereas I could see they would leave him alone as the underworld boss, it seems unlikely they’ll be happy with him as mayor, given how well they must have been working with the corrupt Aubrey James. But Oswald is greatly motivated by his father’s memory now and so won’t turn back. These two power groups fighting over Gotham City would be great to watch.

I’m afraid I can’t stay on ‘great to watch’ for long here though, as thoughts of underworld boss and love triangle unfortunately bring me to Lee’s new finance: Falcone’s son? Say what now?

There were earlier hints of Falcone not quite being happy in total retirement and for all we know Gotham wants to preserve him as a villain for Batman. It never quite sat well with me though, that he could loiter on the fringes of the city unthreatened. The simple laws of underworld rule surely follow those of monarchy? The old king must die so no-one can rally behind him and rise up to challenge the new king? Whether he likes it or not Penguin must kill Falcone? Maybe he’s prevented from doing this by the future needs of the plot, darling? 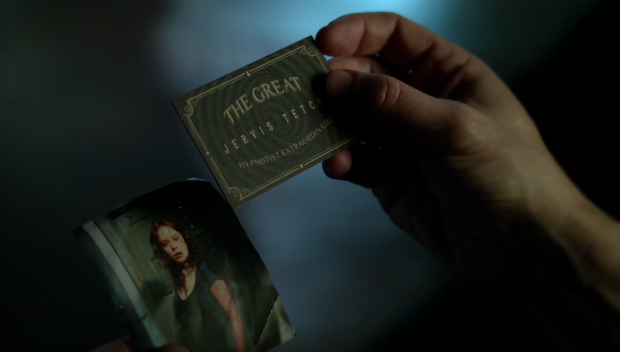 Either way, even if I treat Falcone as just some guy who’s protective of his son I’m still stuck trying to understand Lee’s choices. She’s been one of the best of the adult female cast so far, always dodging sitcom tropes in her relationship with Jim. She’s responded to his troubles with maturity and wisdom and that’s been such a breath of fresh air. And to be fair to the character I could easily see that the loss of a baby could well be that line that she couldn’t cross: Maybe she could deal with anything Jim’s life could throw at her up to the point of losing a child. Fair play, perfectly reasonable.

But has it all just been a ploy to get her into a crazy love triangle? Could her previous strength have held up if there hadn’t have been a plot need to cram in Falcone somewhere or a plot need to make sure Jim has no reason to be happy at the moment? I really hope that Lee and Jim are not just the next Ross and Rachel, just because the Great Formula requires it – just as it required the huge coincidence of Jim meeting Mario Falcone to set up the old challenge: ‘you didn’t tell him about me’.

So, I’ve managed to get all this way through a write up of the Mad Hatter episode without mentioning the Mad Hatter. Better sort that now.

I’m working from the assumption that the Mad Hatter comes out of Strange’s book collection and is not who I first thought it would be many episodes ago. Instead, Jervis Tetch is a mad stage magician who followed an obsession with a sick woman to Gotham, presumably leading to both being experimented upon by Strange. The woman now has toxic, flammable blood and Jervis himself… 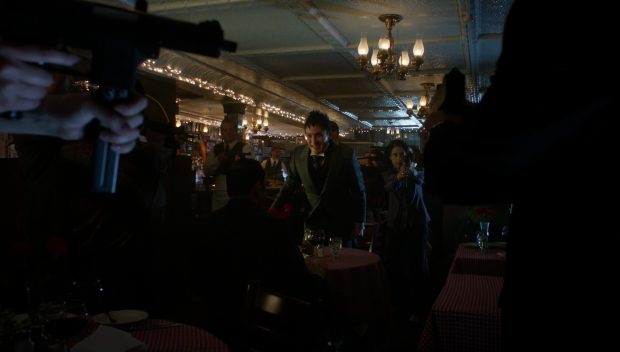 Who has more guns now?

Well, here’s the thing: What powers does he have? Is he just a great hypnotist? Or does he have a mad-science watch that does the hypnosis? Or is it a voice-based superpower perhaps? Ultimately it may not matter but I’d still like to know so I have a better idea of what exactly he’s capable of.

He says he can make people do anything they secretly wish they could do but that must be just good stagecraft, as it seems unlikely that hidden desires can give you balance so perfect you can stand on the back of a chair. Certainly his tapping into Barbara’s psychosis matches his statement but it seems unlikely that the doctor guy from the audience secretly wished both himself and his wife dead.

Barbara’s question then, does still need an answer: Does he have the power to make people to absolutely anything? Does his power verge on the magical? Watch out Jim Gordon if Barbara learns this is true.

In my head, the Mad Hatter is an older character but that might just be Disney’s influence on me. Trying to see passed that I’d say Benedict Samuel does play the role with convincingly insanity and when the Hatter scares the doctor’s wife with a crazy threat I was really on board with the whole presentation.

It is slightly unfortunate for the British audience that stage hypnotists have been so well parodied in Little Britain’s Kenny Craig. This makes it that bit harder to take the line “look into my eyes” (not around the eyes) seriously. Again though, I should put that aside. Nonetheless, though I appreciate it must be really difficult to come up with a good rhyme for ‘castle’ I’d likely have found Jervis Tetch a little easier to listen to if he hadn’t said “awaken the rascal”. 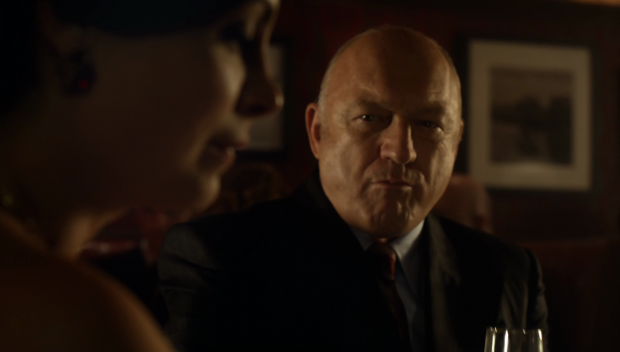 That moment when you realise what you’re marrying into

I get that Batman villains are over the top and crazy – there’s no real getting away from the totally ridiculous. However, a little distance really helps with the suspension of disbelief, especially when we need to take some of the other parts of the plot seriously. In a comedy Gotham the Mad Hatter would fit in however he was presented. And though the horrific and disappointing end of Azrael might make us think Gotham wants to commit completely to the ridiculous the general presentation of, for example, Hugo Strange gave me hope to the contrary.

Jervis Tetch is walking the line in between at the moment. Benedict Samuel is very much pulling it in the right direction but only future episodes will tell us if the writers are pulling against him or not.

Whereas I was not as bothered by season 3’s inclusion of monsters as I thought I would be I am really bothered by this particular episode. Penguin’s still good and the Mad Hatter might go somewhere but the rest of the episode seems to have been built by trawling lists of tropes on the internet.

Bruce and Selina have been great up until now but is their plot going to be ruined by a casual jaunt into mistaken identity? Lee’s support of Jim was really a unique thing but now they’re destined to be just another will-they-won’t-they couple?

Come back Court of Owls, all is forgiven!