I feel somewhat vindicated by this week’s Gotham, specifically by Selina’s quick deduction that Clone-Bruce was not who he claimed to be. Better still, the mistaken identity trope plot offered by Clone-Bruce’s appearance was resolved quickly and didn’t lead to too many ‘but why is Bruce doing that?’ faux-shock moments. I could almost dance in the aisles. Almost. Gotham still has my mind spinning with its character choices though. Sometimes I really love what I see but other times I’m left reeling. Let’s stick with Selina for a quick bit of analysis on this.

Time and again Selina has been shown to be a clever young woman and is probably one of the better female characters in the show because of it. Here in ‘New Day Rising’ she quickly realises by combination of what she sees of Clone-Bruce’s actions and what she’s seen under Indian Hill that Clone-Bruce is pretending to Bruce. Further, she’s not stunned by it – easily dealing with it, much as I suspected she would – as this is just a normal occurrence in Gotham City now. So she is then, both intelligent and capable. 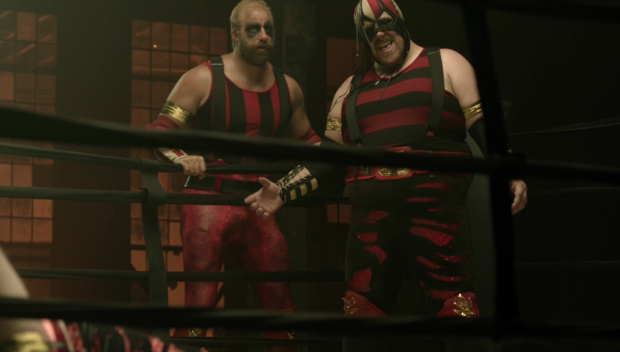 If this is true though, why are we asked to believe that she’d attempt to rob an illegal gambling den with such a terrible plan? Her distraction was half-hearted at best; she had no lookout for the money-counters coming back into their room; worse, she had no plan for getting the money or herself out again.

Just like last episode then, we’re seeing a character’s ability compromised just because the plot needed it. It needed Selina to get into trouble so that Clone-Bruce could save her in a manner that would mark him out as very much not Bruce.

Or did it? Let’s agree that we did need an action sequence at that point, to keep the pace of the show up. Let’s also agree that it needed to be Bruce and Selina in that action plot, as the other characters were busy with their talking scenes. Both of those points agreed though, did Selina’s intelligence really need to be compromised? Couldn’t she have used Clone-Bruce as a lookout? Couldn’t he have become distracted by something, given that he is a clone struggling to understand how the world works? Couldn’t that – amongst possibly numerous other possibilities – have gotten them both into danger? We could still have Clone-Bruce going all Terminator on a door if Selina had been dragged off somewhere. 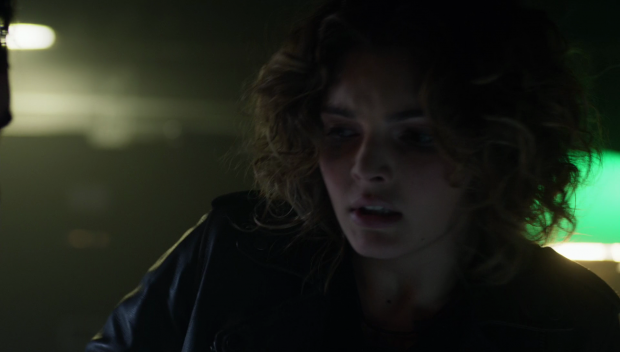 I used to be good at what I do

To me this would make a real difference between a show you just have on and something that you can’t miss. We saw an event. It got us passed having too much mistaken-identity plot that’s all too well-used already. It even ends with quite a charming little moment where a still-teenage Bruce wonders if Selina was thinking of him when Clone-Bruce kissed her. But however good any individual moment is, if you can’t know the characters well how can you be surprised when then do something odd? How can you cheer when they do something you just knew they would? Maybe you can get to good but you can’t get to great.

Pleasingly, Lee’s choices are on better form this week. I’m still bothered by the coincidence of her meeting up with Falcone’s son of course but her little heart-to-heart with Jim worked well: Losing the baby was her limit. It was that moment where Jim needed to step up, where no matter how wise and capable Lee is she did need some support. Lee and Selina are both great characters and I hope they don’t suffer much more to the needs of the plot…

Turning my attention to the male cast I have similar concerns for Butch, who’ve I’ve also liked a lot. To be fair they were only concerns and they might be alleviated by ‘New Day Rising’. Though it was fair enough for Butch to follow Penguin whilst he chasing down Galavan, why would Butch remain as Cobblepot’s henchman once Galavan was defeated? Butch has always had the respect of his men too, so wouldn’t he be able to set up on his own? Especially in the chaos that came with Falcone’s fall? But Penguin taking a shot at being mayor does answer these questions: Butch would have access to even greater power, even better run of the city, working for both the mayor and the king of the underworld. 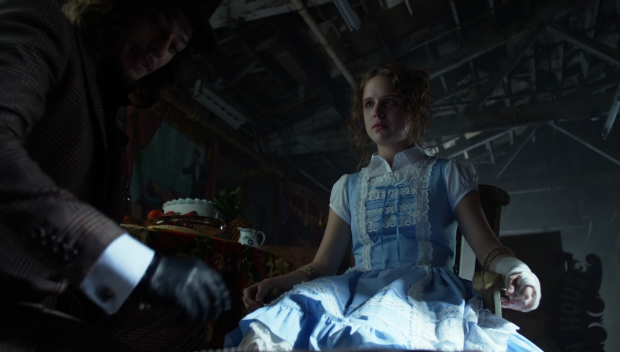 Perhaps now though, with Nygma stealing his spot as Penguin’s chief of staff, Butch will make a move on his own. That would be really interesting. Though seeing the Nygma-Penguin bromance reach new heights with the love riddle and that “I’ll always believe in you, even when you don’t” speech did make me cringe a little, I think I would like to see Penguin and Nygma go up against Butch and gang. I still wonder too, whether such a thing would cause the Court of Owls to take notice and get involved. Possibly even Gotham’s collapse into chaos would fall beneath their notice but their money must come from somewhere, so maybe it could work as a plot?

Always be careful what you wish for though. I said last season that I wanted to see the Penguin-Nygma friendship explored more and here that comes now. Am I allowed to counter-wish that they drop their plate of cheese as they go though? Equally, last week I wished for the Court of Owls to come back. Kind of nervous about that now. Still, anything that brings Bruce and the Court of Owls back into contention must be a good thing?

Given the speed Gotham moves at I assume the Court is going to be the mid-season challenge, which will keep Bruce busy. But what does that leave Gordon? Contenders are perhaps Ivy, who’s strangely vanished, and Barnes, who’s now a monster of some form after absorbing some of Alice’s blood.

Things that I did not see coming that I probably should have done given how fast Gotham moves: Barnes becoming a villain and Alice dying. 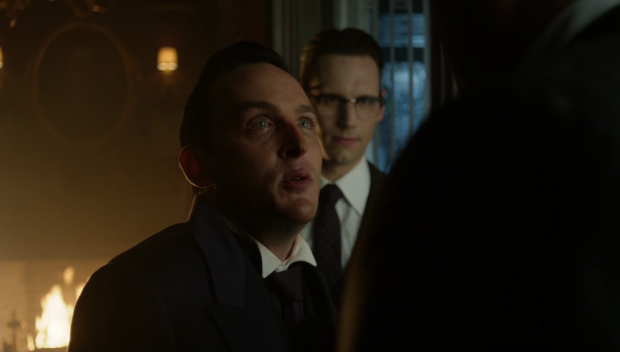 I love him and there’s nothing you can say to stop me!

I really thought that Barnes would play some part in Jim’s redemption, especially as Valerie doesn’t seem to be offering that. Barnes has been quite underused for a while now though, so I guess monstering him up gives Michael Chiklis something more interesting to do. Jim’s path to redemption has instead been aided by Lee, which seems fair enough given their history, and kicked off by the Mad Hatter.

I feel like I’m getting closer to understanding what Jervis Tetch is capable of now, thanks to Alice’s chat: He has mental powers that are perhaps focused through concentration on physical objects. I also feel like I have a greater understanding of that talk about being able to make people do things because that’s what they’ve always desired. In truth, Jervis can make anyone do anything with hypnosis but if his commands happen to match up with thoughts or feelings that are already in the subject’s head they can have a lasting affect on the person that extends beyond the period of hypnosis. Maybe you understood it differently? I do like to know these things for some reason.

Interesting that his and Alice’s ‘power’ were both inherent to them and neither were created by Strange? There might be more to come on that though. Alice’s blood appears to have aided Strange’s experiments rather than her being one his creations. Her brother though, has that distracting connection to one of the books Strange was holding under his arm whilst he was talking about what he would create next. Perhaps before he came to Gotham he wasn’t fixated on the Mad Hatter? Perhaps Strange enhanced Jervis’s existing mental abilities by creating that link to Alice in Wonderland? 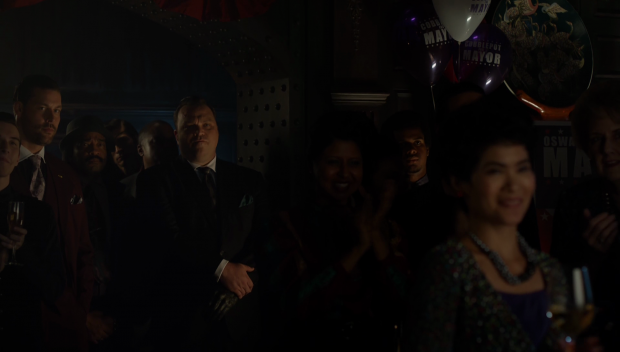 ‘New Day Rising’ was a very half-and-half episode for me.

I was very pleased to see the Terrible Tweeds as lucha-libre wrestlers instead of monsters created by Strange, which might have strayed too far into the ridiculous – a place that I’m happy the Mad Hatter has so far been able to avoid. Better to keep Jervis Tetch as a very sick man with too much power.

It was great that Lee had a really good reason for turning her back on Jim romantically whilst still being his friend but I wish that Selina’s intelligence hadn’t been compromised just to get some perceived-necessary Clone-Bruce plot out.

Gordon starting on his path to redemption has been pleasantly spread over four episodes – slow for Gotham – but was there really nothing better for Barnes in Jim’s upcoming plot that Barnes needs to be monstered up?