I’m hoping that this week’s Gotham is the setup for the double-episode season finale plot in the same way that ‘Light the Wick’ felt like the painful setup for ‘All Will Be Judged’. Not that I disliked this week’s fare as much as ‘Light the Wick’ but a large majority of my responses to ‘Pretty Hate Machine’ were along the lines of “say what now?”, “why would you do that?” and “no, surely not?” 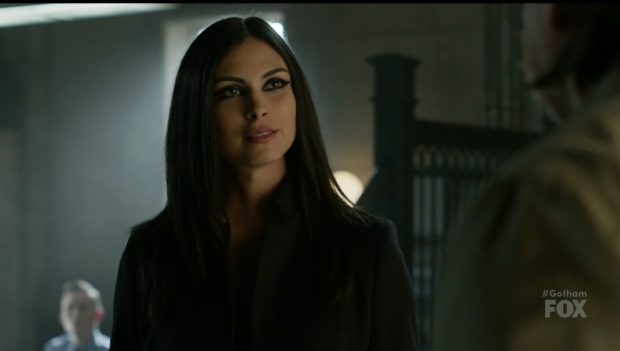 I think I’m following the connections that are holding Jim and Bruce’s plot together around the Court of Owl’s (as was) plan to infect all of Gotham City with the Alice Tetch virus. Probably I should even acknowledge the real meaning of Kathryn’s comments about showing Gotham it’s darker side. I see now that she was speaking artistically in that they would see it just before it destroyed them. Perhaps you’ll forgive me that though, in light of at least my trouble working out why the villains are doing what they’re doing?

Why did the Court of Owls want Jim? Not that it matters now of course with them being dead. But on that, is Ra’s Al Ghul’s plan to replace the Court entirely with Bruce as a method of controlling Gotham City? (I have to assume Ra’s is the one Bruce’s evil spiritual guide is referring to when he speaks of “the one I serve”.) How does that work?

If Bruce is to benefit from the promised further treatment from Ra’s then what was him becoming just a hypnotised weapon all about? A two-episode finale of Bruce receiving more instructions like a zombie would be dull but surely he can’t be going on a real spiritual journey right after a fake one? And what was the Court of Owl’s real plan? As a group of long-term strategists left to fend for themselves for a while did they not have some idea they were in trouble when the boss man comes back into town with his own Talons? 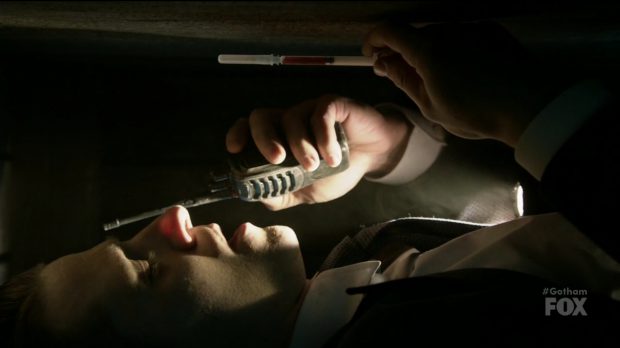 Now, I’m happy that the shaman guy was lying about being upset about the killing of the Wayne parents as this is a necessary ruse to get Bruce on board but still, why does he want Bruce? Can Ra’s Al Ghul see through time to know that Bruce is going to become Batman? Why else would he want a teenager who’s just started his training as a weapon against disorder? Maybe I’m reading it wrong and Ra’s wants Bruce to become a business leader that will help to remake Gotham City and so control everything like the Court of Owls must have failed to do?

This by itself may have had the chance of being a good mystery even though there’s the danger of it leading to the threat of season 4 being Ra’s paying for Zombie Bruce to go through business school. What really stops me enjoying this mystery though is that it’s surrounded by a lot of other things I don’t understand and so by association everything seems to make up a sea of chaos.

How on Earth is the Penguin-Riddler battle going to fit into the finale for example? Are they even going to able to fight for that matter? Fish Mooney arrives? What? Why? Is she now working for Ra’s? Why has she been away for so long? Was Penguin kidding himself when he believed Ivy could get him the army of freaks? Why didn’t anyone mention they worked for Fish still? Ivy’s a little lost as a child in an adult’s body but has she ever been this stupid before? Child Ivy wasn’t as far as I recall and it takes some empathy and skill to be the con-person who can trick foolish rich men out of all their money if you’re not going to go to bed with them. 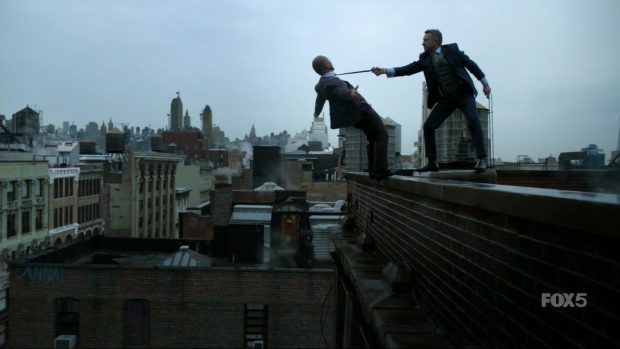 Without knowing what anything means I’m not sure what to believe or how to read anyone’s choices. Most problematic for me is still Lee. Fine she thinks Mario is her fault – guilt and pain are terrible in combination – but injecting herself with the virus to embrace her dark side? Why? Doesn’t she want to get away from darkness? She’s not insane until she takes the virus, so what was she trying to achieve, even in a deluded pain-fuelled way? Yet everyone seemed so convinced that she would inject the virus. I know it’s Gotham City but isn’t that a bit too far even so? She even challenges Jim with “you know why!” But I’m stuck on no, I really don’t.

Worse, now Lee is just another Barbara, hung up on a crazed attraction for Jim. To be fair, though I often didn’t like Barbara’s previous plot it was because I thought she was underused and could have benefitted from more focus and a greater build up in the earlier seasons. As a premise though, her attraction to Jim and (previous?) fixation with him is a good one. But shouldn’t Lee be different so Jim isn’t just some dark god of women-destroying and so that women near him don’t just become defined only by him?

The only thing I was glad to see in Lee’s plot was that she embraced evil without adopting the full dress code. Evil versions of female characters usually have to show more cleavage than their good side would as a general rule but Lee managed to get away with just having to spam the eyeliner – she perhaps still has some control of her own destiny remaining then. 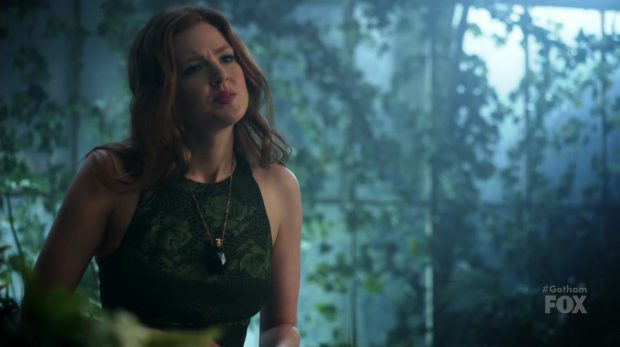 I’m with stupid. Wait, that’s me now? When did that happen?

All in all I would say it was not a good episode for the female cast. Ivy’s now just hot and stupid, Lee just hot and evil and Tabitha? Poor woman was already just there to be hot and backside-kicking but now she’s been reduced to a grumpy teenager whose partner just doesn’t get her – pout.

Saying that, Butch is now just a plot mouthpiece and Lucius doesn’t even get to be on screen anymore. Lucius could easily have been the one to investigate the glass owls, comment on the virus and use his intelligence to work out Court of Owls’ plots and schemes… Not sure who has it worse really.

Talons are still rubbish enough to fail to kill an unarmed Court of Owls’ member when the plot needs them to be. Characters can cross the city in whatever timeframe causes the greatest plot coincidence using Roger Rabbit physics. Cell guards sit next to the cells with their keys easily in reach. Jim injected the virus but seems strangely immune to it bringing out his darkness. Blah, blah, blah, pain, bleurgh… Right I need to say something positive before I burst into flame. 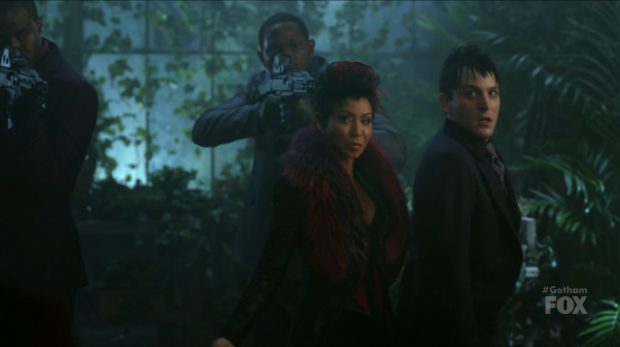 Fish’s back… for some reason…

So, given the above, why do I say ‘Pretty Hate Machine’ is better than ‘Light the Wick’? Because chaotic choices aren’t as meaningless as ones forced by the needs of the plot. Though both seem to offer the same danger of a show being just a series of events, the former only leaves me confused and looking for meaning whilst the latter means there’s definitely nothing to find. Also, I did enjoy some parts of this week’s offering.

“Call me The Riddler” was funny. And it’s a validation that I can easily see Ed’s ego needing. I got something out of Alfred vs. Professor Strange too. Most interesting though, was Jim’s choice. I found the choice whether or not to inject the virus to be a believable one. That feels odd for some reason but I’ll explain it.

From Jim’s perspective it’s a choice between standing a chance of helping Gotham City and dying. He’s not one to protect people by taking no action – he’s always been one to jump into a problem – so thinking he could help before the virus took full control of him is a real possibility for him. I may take issue with believing he’s right but from his perspective fair enough. 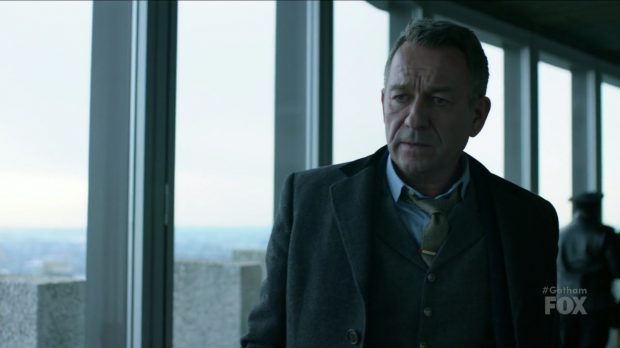 From our perspective it is equally possible, based on what we’ve seen before, that the characters could quickly find Jim underground as they could suddenly get inspiration for a cure for the virus. Nothing is out of the question in Gotham and timeframes are not relevant in mad science. I actually didn’t know which way the show was going to take it.

Ultimately though, how I feel about ‘Pretty Hate Machine’ is summed up by Bruce’s final scene. Bruce getting a choice over which influence to follow has the making of a very powerful moment. Does he succumb to the hypnosis of his evil spiritual guide or does his life with Alfred break through? I’m not sure it’s yet had the greatest build up in the moment but the foundations of both pulls on Bruce’s soul have been, so I hope this comes back up in the season finale.

This was not a strong episode in my mind. Many members of the female cast have been reduced to a single characteristic and what might have been either mystery or meaning is lost in a chaotic sea of questions around character decision and purpose. 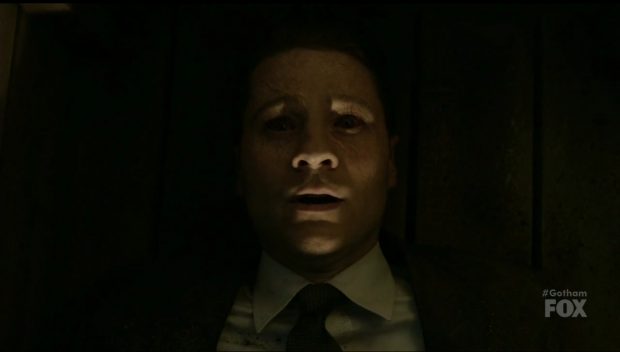 Based on the last couple of episodes before this one I’m prepared to believe that the season finale will use this week as a springboard to something better. That said, I’d still say there’s a lot of ground to make up. We need to see a real effect of the virus on Jim: Throwing a police officer to the side whilst still pursuing the safety of Gotham City does not make Jim dark and monstrous. Penguin and The Riddler’s battle needs to find a place in the coming struggle, however the hell Fish Mooney’s interference can do that. And most importantly the female cast need to recover themselves: I don’t want to see stupid Ivy and pouty Tabitha watch pointlessly from the side lines whilst Lee follows annoyingly in Barbara’s footsteps as nothing more than a Jim-crazed woman.

Nonetheless, I have some hope that Ra’s Al Ghul will give Bruce a tempting choice, tempered by Alfred’s influence, but quite a lot may be resting on that if the above problems aren’t tackled.