Gotham’s season 3 plan for Jim comes to a head in ‘Red Queen’, forcing him to consider both his past and future actions. This is something I’ve been waiting to see for a while now. I’d thought it would come mostly through Barnes originally, then maybe through a villain and some at Kneel Before Blog thought Valerie Vale would be the instigator. Certainly Barnes and Galavan have raised the question to Jim in the past but Gotham chose make Jim’s ultimate moral interrogator Jim himself, under the influence of a psychedelic drug.

I like this choice. Perhaps who better to judge you than yourself, knowing all the ins and outs of your situations and choices as you do? There’s no guarantee that this would go well for you though, as Red Dwarf’s ‘The Inquisitor’  showed. Here Red Queen forces Jim to be honest with himself but it seems he’s not so far gone into self-hatred that he doesn’t want to recover. 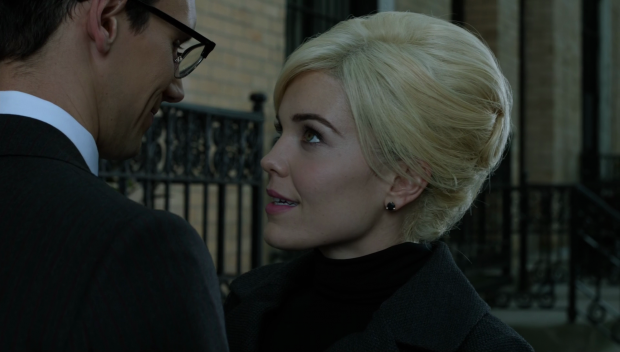 Set a Kringle to catch a Nygma?

Hallucinations are an interesting little plot device. Do you go down the route of trying to show dreamlike representations of facts whose meaning the audience and central character alike have to interpret or do you make it a wild ride of imagination that’s more of an experience unto itself? I’m not sure there’s a need to pick one over the other but I’m glad Gotham chose the former, as it takes the plot back to that question of ideology and of right and wrong that is so central to Jim’s character and something I always enjoy seeing in a show.

Bullock summaries Jim’s situation well when he says to Jim “be a cop or don’t; what are you so afraid of?” Perhaps it’s even this question that guides Jim’s trip and brings those three situations to his mind.

Funky choice making Barbara Jim’s spiritual guide but one that actually makes a lot of sense. Barbara has also changed a lot – possibly more – from who she was at the start of Gotham and so could believably offer a useful perspective. She’s also arguably still a little insane and someone Jim would equate with madness. Interesting to see that Jim still finds Barbara at least physically attractive too, with that nice nurse to nun joke.

Keep me right with Jim’s hallucinations: what did you get from it? In the first vision set I understood that he felt bad for not being able to properly help Bruce find his parents’ killer and bring those responsible to justice. I don’t think I quite got the war reference though. I think I remember Jim being a decorated soldier but why would he feel bad about it? Is there more to tell about what really happened over there or does he just feel survivor’s guilt? Actually I like not knowing; it lets there be something for future plot to deal with. 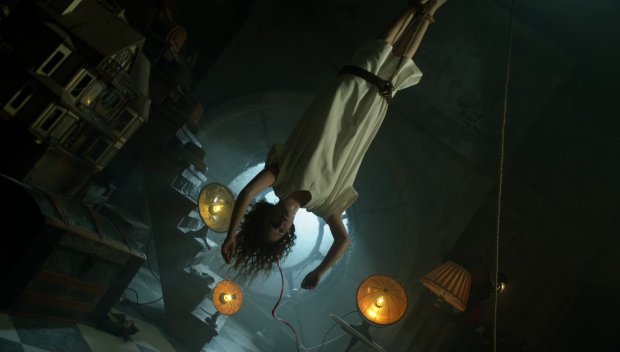 Clearly with Lee Jim feels like there was an opportunity for happiness that’s now lost. Or is it? Valerie and Lee are both convinced Jim chose Lee last episode because he knew Tetch would think it a bluff. Jim of course denies this but as ever, the women in his life know Jim much better than he thinks they do. This is also something that I’m pleased to see: that consistency from Lee. I’ve felt she’s been pulled into a Ross-Rachel triangle (possibly quadrangle?) that I thought she was too mature for, so when I see her show that understanding of Jim I feel that maturity coming back. I find it a good example of a strong female character that doesn’t require any tiresome backside kicking.

The final vision – of Jim’s father – is pretty straight shooting but not bad for it. Sometimes I wonder how difficult it must be for an actor to pull off what they do when the crazy is running really high in the script. Do they then really like it when they get their hands on something like a father-son scene? Ben McKenzie’s vulnerability in the light of Jim’s father’s legacy is charming to watch and possibly my favourite part of the hallucination.

Where does this revelation of the Code of House Gordon take us from here though? “While we breathe, we shall defend.” Has this code been forgotten by the member of the Court of Owls who holds a Gordon ring? Has he corrupted the meaning of the code to serve his own selfish ends? Maybe he defeated a member of House Gordon at some point in the past and the ring is a trophy? All interesting questions. As is: where does the Gordon family sit amongst Gotham City’s elite – the families Wayne, Dumas, Kane, Crown, and Elliot? 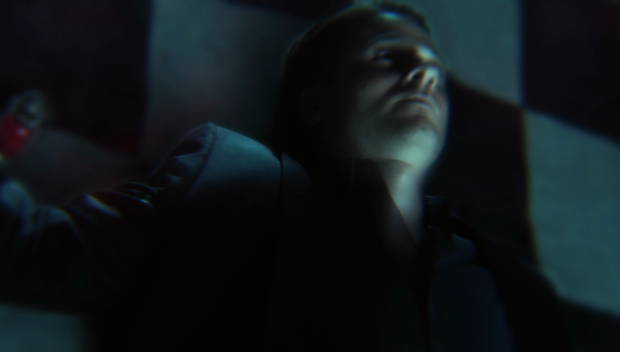 A trip to self-realisation

Now, I love this kind of thing, as it brings in the politics. And despite my reservations concerning the Court of Owls last season, so far this season I must admit they’re offering the threat value that other villains have so far not quite been able to. They’ve outmanoeuvred Bruce once, they appear to be quite unaffected by Strange’s defeat and now they’re making a move on Penguin. I knew this had to be coming and am excited to now see it teased.

I’ll say that I was initially slightly bothered when Katherine left just before Tetch turned up – coincidence and all. However, the moment was saved when the evil Court of Owls top dog comments on it. Sometimes that self-reference can work and I’d say here it did – even the Court of Owls make use of luck sometimes.

What did stay with me as seeming a shame was the length of time given over to Jim’s hallucinations and Tetch’s toying with Gotham City’s self-proclaimed elite. I would have very much enjoyed seeing more of both. Jim’s been building to his realisation for a long time and probably a little play back of more of his past choices could’ve given him a more difficult final path to salvation. Also Tetch’s little tea party last week was so enjoyable I’d happily have watched him give the mayor and cronies similar treatment.

That said, the love plots set up two weeks ago aren’t anywhere near done yet, so time given over to them is well enough spent. Bruce and Selina are still the cutest couple of the set. It feels a little weird hearing them speak of romance in such a world-weary way, given that in season 1, I think, Selina sealed a deal with something like ‘do this and I’ll let you kiss me’. Still, they live in a dangerous world and maybe you have to grow up that fast. 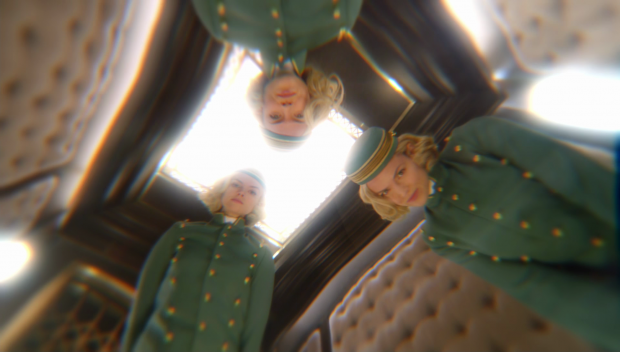 Did someone order a spirit guide for madness?

The Nygma-Penguin-Isabella triangle is much less cute but certainly very intriguing. I’m still thinking that Isabella is a setup. I want the setup to be Butch’s, allowing him to entrap Nygma and retake his place in the crime world. Another possibility has to be the Court of Owls of course.

Either way, I think the sigh that Isabella gave after her run in with Penguin was less an ‘oh, my God, what have I gotten into’ and more a ‘thank God I managed to convince him’ – very subtle if so but all the better with it. Certainly it explains her dedication to Nygma despite learning he’s a girlfriend murderer before the second date – normally a relationship killer… pun probably intended. Her story is still good though. Perhaps I – in the audience – am not buying that finding storybook love is enough to get her passed the danger but I can believe it’s enough to get a criminally-obsessed Nygma to believe.

‘Red Queen’ brings back into the plot a lot of things that I personally like: Jim’s ideological battles and city politics. I’m therefore predisposed to think higher of the episode. 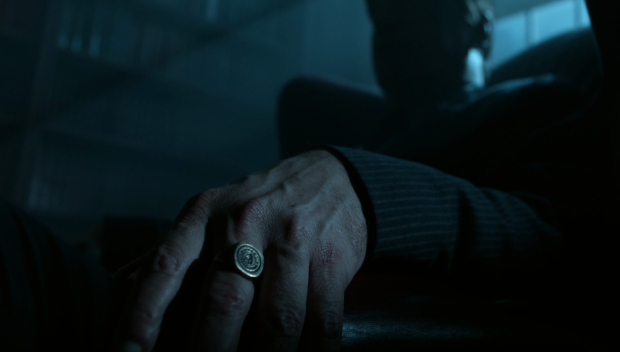 Corrupting the Code of the Gordons?

Better than this though is that the plot avoids some problems I’ve had with the previous episodes this season: characters doing things they otherwise wouldn’t just to set up plot, stereotypical villainous actions and afternoon-TV plot twists.

Better still, the teases of future plot open up lots of interesting questions that will likely drag all the heroes into confrontation with the Court of Owls. I’ll never forgive them for their crazy over-the-top setup of Indian Hill but they’re really starting to win me round with their scheming this season.