Gotham’s second mid-season finale this winter presents a villain-off between Jerome and Nygma. In a competition of scheming, both have emotional issues to resolve, Adam-West-era kill devices and an image to sell. All in all I thought this delivered a very good episode but almost entirely through Jerome, who easily wins all three contests. The Penguin-Nygma plot by comparison only seems to offer any form of challenge from the point Oswald has his revelation. 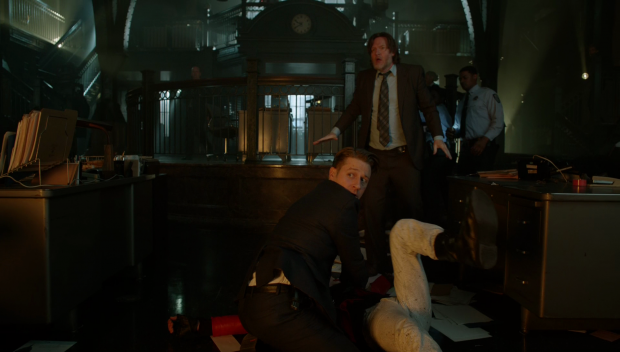 I was already concerned this imbalance would continue from last episode, in which Jerome very much stole the show, and I think the opening scenes of ‘The Gentle Art of Making Enemies’ only made me more wary. The first scene was great of course. That was a proper riot and perfectly sets us up to know that tonight’s going to be a very bad night for the good guys. But it’s actually quite a short scene and it doesn’t come back after the credits, replaced by a much slower-paced chat between Ed and Oswald. Not that this doesn’t have any threat value at all but it’s fairly every-day for Gotham City now, so the exciting stuff was followed up by… some chat.

And the exciting stuff was really exciting. I always wanted them to cut back to the circus as soon as possible. Jerome and his fanatics’ death circus was a truly horrific place, even worse for the residents of Gotham than their standard city problems that include slave auctions. And wonderfully grim as that is, it’s all the more sickening by Jerome accepting his given role by referring to himself as a messiah.

Surely, surely, surely he’s the Joker? I mean he could be the inspiration for a series of Jokers but surely he’s going to be named as the first at the very least? Aren’t Jerome and Bruce pretty much locked into their eternal battle now their origin points seem to be so entwined? 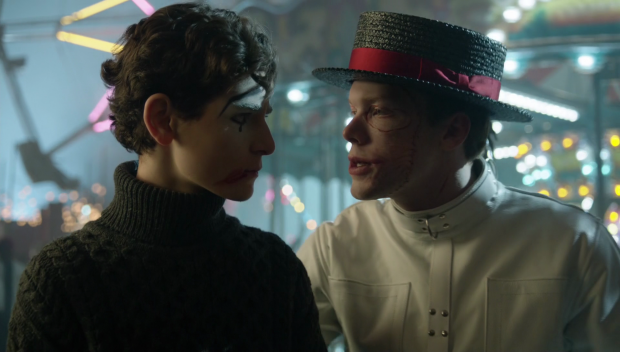 I’m totally won over by this possible twist on Batman’s origin by the way. Previously on screen we’ve seen insane villains arise in the wake of Batman first choosing to use the crazy against Gotham City’s corruption. Here might we see the opposite: Bruce may have to adopt a little crazy to survive and go up against the insanity that has taken over his city – fighting fire with fire. And all the while Jerome as the Joker will be there reflecting the danger of that choice back at Bruce, at once both his nemesis and the warning that keeps him from breaking his Rules.

Ever someone to be won over by a good ideological debate, I was hooked in from the point Jerome and Bruce argue over whether there’s good left in Gotham City or not. Maybe I wasn’t sure if Bruce seeing himself as Jerome in the funhouse mirror wasn’t a little too blatant but the rest was spot on. I was particularly taken by the scene where Jerome claims Gotham has no heroes and Bruce immediately acts to prove him wrong by trying to save a man from Jerome’s torture. Though Bruce fails, his intent has the power and meaning.

Admittedly if you’re still not happy with Gotham’s tagline effectively being ‘The Rise of Batman’ then you’re not going to like Jim Gordon taking a back seat to Bruce this episode. But would you not still say that Bruce’s first real step on the road to his future was well developed? 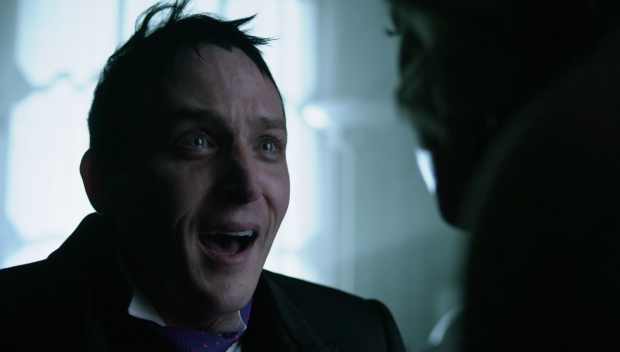 The power of love

Whatever I might have thought of the fine details of the moment of Bruce’s realisation I loved the crystallisation of Bruce’s experience into his First Rule. Alfred truly steps into the role of mentor as well as father and guides Bruce to his ideology. What’s your training for? What will continue to hold you back from anger and self-righteousness? What type of man will you become? And it’s important that he doesn’t tell Bruce what to do. Bruce has control of his destiny. He decides not to kill. It’s a powerful moment and it’s well delivered. All Bruce vs. Jerome is and I’d recognise not just because of the acting, as there are several scenes where we’re shown characters at their best, without compromise.

In ‘Ghosts’ I couldn’t see a reason why Jim would walk away from a defeated Zsasz without finishing the job. Here Bruce has to walk away from Jerome, he has no power to arrest the villain and anything worse would do exactly what Bruce wants to avoid – make him the same as Jerome.

In the last two episodes a moody Lee has been taking her revenge on Jim but here she shows her defining maturity again by giving Jim the information he needs to find Jerome.

Also, Alfred and Jim both show their intelligence and skill in dealing with being outmanned and outgunned by Jerome’s minions at Wayne Manor.

So, all in all, this was a completely brilliant episode? Well, close… 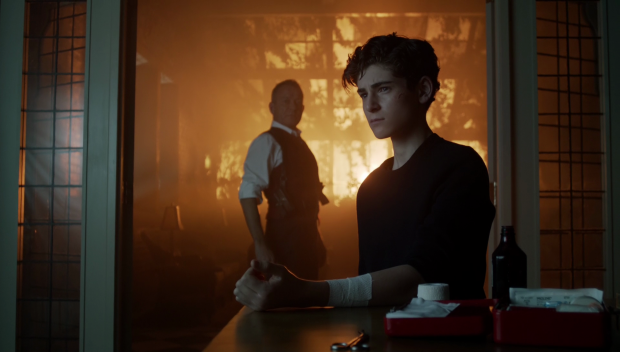 The First Rule is written

Definitely Oswald’s realisation about what it really means to love Ed is worth getting to. This and Nygma shooting Oswald both give their differences and battle real meaning – meaning, by the way, that their earlier scenes lacked for me.

What was with Nygma’s Christian-Bale-Batman voice? I mean, clearly there’s the Batman connection and now he really means it but seriously? Was it supposed to make him more physically threatening? Nygma just isn’t ever going to be that; and arguably why would the Riddler ever want or need to be? That’s not his thing. I didn’t get it. I don’t think it worked.

Neither did his whole chain-in-the-ice, barrel-of-acid thing. Both the voice and kill device seemed to pale into insignificance compared to Jerome’s stapled-on face crazy and death circus. Worse, the way Nygma introduced his death trap he didn’t really seem very enthusiastic about it, almost as if he was aware that it was a bit half-hearted compared to Jerome’s effort.

It all starts to get a bit painful to watch. Jerome’s plan is foiled by three main characters and a SWAT team; Nygma’s fails to a bumbling security guard. Jerome gets a cannon to ride; Nygma has to use the boring old acid you have to buy from the discount villain supplies warehouse. Jerome channels the film Jokers; Nygma gets Adam-West-era TV. 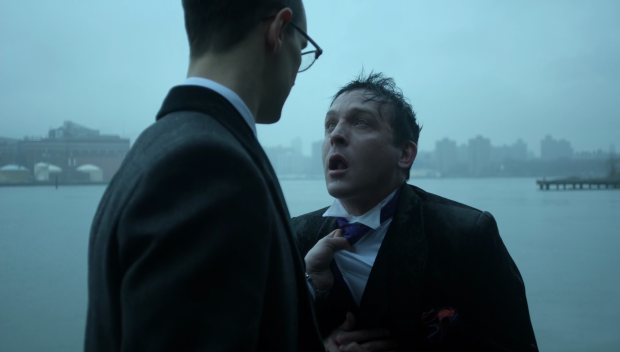 Going the way of Fish – i.e. he’ll be back next season

Perhaps in another plot arc Nygma’s scheming would have naturally fitted Gotham’s comic-book style perfectly well but here there’s a real clash of theme. Jerome’s Gotham is terrifying and black-humoured whilst Nygma’s is farcical by comparison – it just doesn’t hit anywhere near as hard. When the emotion ramps up as Oswald realises what love actually is the plot starts to get some power but it takes a very long time to get there.

As a potential origin story for both the Joker and Batman ‘The Gentle Art of Making Enemies’ really shines. I think it’s held back from total success by the comparative weakness of most of Ed and Nygma’s battle and the awful threat of Clone Bruce’s return. (At least give the kid his own music that isn’t a rip off of Dexter’s.)

Nonetheless, Jerome’s death circus was wonderfully horrifying, the black humour from Bullock and Jerome perfectly matched the black nature of the plot and the threat value of the Court of Owl’s return in the form of Jim’s uncle Frank easily carry the episode to success.