I do like to understand the episode and arc titles Gotham uses, if only because it helps overcome my concern I might be missing something important in an episode. I confess to being slightly unsure what ‘The Primal Riddle’ is though. Is the prime question one of who we are or of what it all means? Logically these questions are related but this episode focuses on character purpose, so I’ll take ‘what it all means’ as my answer. And beyond directing my attention this focus seems to have two further benefits, giving a power to Gotham’s customary speed and providing some suggestion that more side characters might get proper purpose. 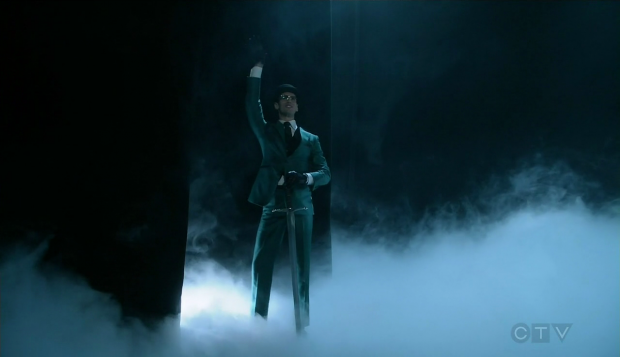 On with the show!

With the exception of Penguin gathering an ‘army of freaks’ every plotline has some direct connection to the Court of Owls. Despite the rapid scene switching then, the plot mostly follows along a single thread concerning how each character is coping with the Court of Owl’s advancing plans. In previous episodes I’ve often found Gotham’s rapid scene switching to be distracting, hindering my enjoyment of the story as my attention is broken – sometimes completely so by a change of pace, character and significance all at once. This episode though, the thread seemed to keep my attention, allowing it to match the increase in plot speed gear by gear. I appreciate this crafting.

The purpose added to side characters was certainly as welcome to see but perhaps didn’t hit home quite so well with me. It was definitely great to see Tabitha get to make a decision and have some impact, especially given her shameful running away from the warehouse last week: As an angry and capable ninja I expected her to stand and fight the next Talon. But was Butch just wheeled out again to give Tabitha someone to side with against Barbara? I might have preferred to have seen more of him before now if there’s really going to be a power struggle.

Lee potentially benefits more than both Tabitha and Butch, regaining good purpose by declaring her quest for revenge on Jim. Perhaps her odd little appearance last week then was foundation work for her appearance this week?  Perhaps in turn this bodes well for Butch getting some important plot next week? 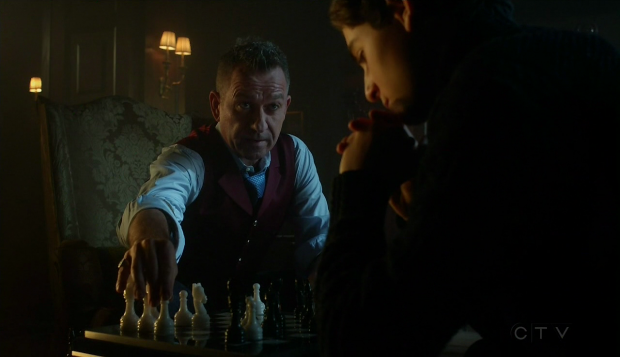 The one I can’t make up my mind about is Selina. I’m guessing her fall will be followed up by her waking up surrounded by those alley cats, furthering her connection – homage? – to Michelle Pfeiffer’s Catwoman. How will Selina’s origin story fit into the Court of Owls finale though? Maybe instead it’s going to stay off screen for a while, perhaps until Bruce gets back to town. Or – random thought – maybe a teen Batman needs a teen Catwoman to play with…?

Despite wondering where Catgirl’s story is going I will say that I thought the lead up to fall worked well. Clone Bruce searching for sense to his life is good reason for him to look up Selina. And I was SO GLAD to see the mistaken identity trope not play out too far. I can’t emphasise my words any more there without some serous font transgressions.

It’s just such a trope it would have been really difficult to watch Gotham if Alfred and Selina hadn’t noticed something was wrong. And they do – straight away from our perspective. I hadn’t expected to see Alfred call it out let alone Clone Bruce reveal the truth to Selina. It gives the overused idea of clones a purpose when it’s spun to a new angle. (Still though, could he not get his own incidental music rather than stealing from Dexter?) 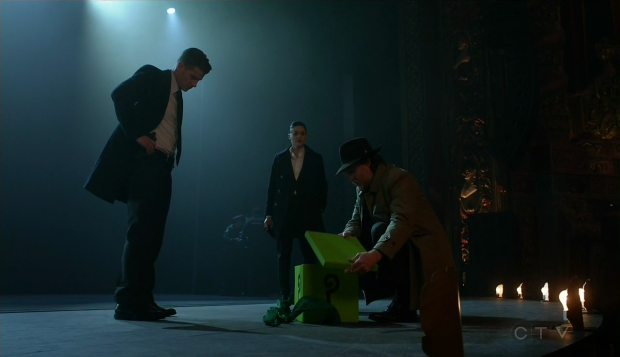 A scheme is afoot

Possibly this sort of thing is just good writing, possibly it comes out of Gotham now having a solid previous back book of character interactions to draw on. Either way, anything stands out as purposeful when it’s repeated to show it’s not just a fluke. Here in ‘The Primal Riddle’ you can see it a second time when both Lee and Harvey call Jim out for hiding something. Clearly both should know Jim well by now and Gotham doesn’t try to create false mystery here by an emotional character now being able to easily disguise his thoughts.

I think this consistency is great and allows me to trust in the real mysteries of the plot. It’s great to see Gotham trust that its characters have a lot to offer as they are without needing to bend them this way and that to suit a momentary plot need. For whatever reason the show has always been good about showing us an intelligent Jim Gordon – here the line “then the riddle will go unsolved” perfectly manipulates the Riddler – but this episode many support characters get the same great treatment.

So, where does all this good stuff take us? On the plus side it’s gotten Jim into the Court of Owls. I’m not sure we have any real idea why they want specifically him yet but its good movement towards an interesting finale with potentially both Jim and Bruce working the enemy from the inside. On the minus side, The Riddler got into a car and vanished and Lucius has presumably been returned to a GCPD cupboard. 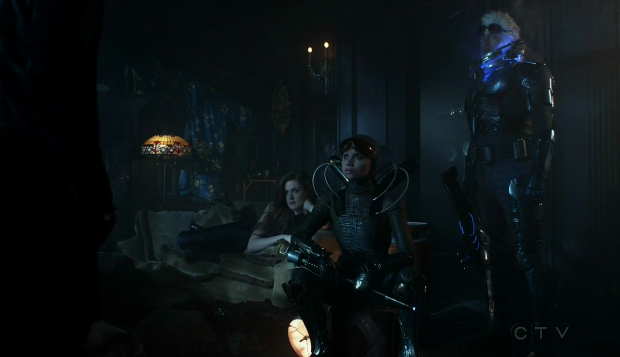 One of you is different somehow…

I do like the Riddler as he has become. He’s a real super villain now with crazy schemes twisted to serve the needs of his madness before the best interests of the scheme itself. Hopefully Penguin, Ivy and their expanding army will follow The Riddler’s example. Nonetheless, I was hoping for a greater climax to his first real scheme than him becoming a minion of the Court of Owls. And poor Lucius: Tabitha, Lee and even Clone Bruce got some real purpose this week but Lucius missed out. Not only has his potential to be The Riddler’s nemesis been taken from him but now he’s not even on camera anymore.

There’s a lot going on behind the scenes this episode that increased my enjoyment. I still think like last episode we’re waiting for the real plot to land but the delivery of this week’s plot impressed me. We dodged tropes, saw characters gain purpose and enjoyed a good pace to the plotting. Better still, from a personal perspective, never once was a character compromised for the sake of the plot. I would have preferred a more glorious end to The Riddler’s first scheme but the build up to it was more than enjoyable.