Gotham begins the climb to its mid-season finale by linking all plots into the Court of Owls. I was expecting this with Bruce’s plot, though I’ll admit I’d assumed the Whisper Gang were in the Court’s employ rather than being a potential ally for Bruce. The man in the chair wearing what I’d assumed was a House Gordon ring was my thought for Jim’s hook but it’s true that he’s normally pulled in through some crime he’s investigating. The whole Mario thing though, I was not expecting that. If I’d been told Jim’s hook was going to have a crime angle again I’d probably have guessed it to be somehow part of the Nygma-Butch wrangle. 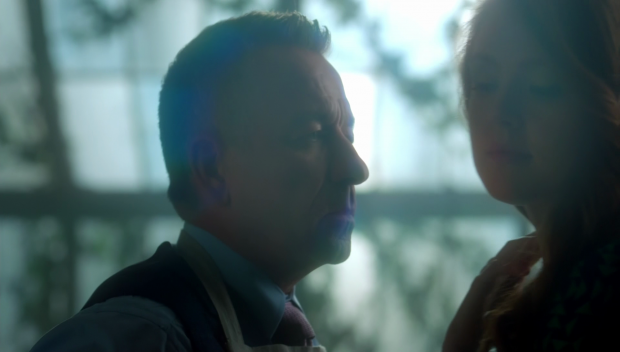 Men do want I want

I’ve been back and forth a bit with what I think of the Court of Owls and this episode has not helped me at all. Their introduction was definitely coloured by the over-the-top nature of the season two finale: Cuttlefish Mooney, her monster army and the nuclear weapon under Indian Hill were all several steps too far for me. True they were really Strange’s deal but the Court had sanctioned him. Even if they didn’t know the details I blamed them for the nonsense as they were ultimately in charge.

This season though, they’ve really been growing on me with their politics and dealings with Bruce: the man in the chair, the connection to the five families, the control they’re suggested to have in the background – all very intriguing.  They seem to be a credible threat to everyone. It’s believable that they have been around in the shadows throughout seasons one and two: They never got involved because they truly didn’t think there was anything going on that was big enough to affect their long-term interests too badly.

But now they’re afraid? Well, they’d never admit to that. Let’s say they believe that what’s coming is large enough or threatens to be permanent enough that they need to get personally involved. But what on Earth could it be?

Fish Mooney? Surely not, she didn’t seem to have much of an army left after the GCPD and mob saw her off. Political trouble or disorder in the criminal underworld? Couldn’t be, as Penguin has secured both by seeing off challenges on all fronts. Tetch is locked away; Strange similarly; the major Batman villains are dead or also locked up. There’s Bruce of course but the Court must assume he’s in hand until they can betray him and steal his company. So who’s left to cause them trouble? 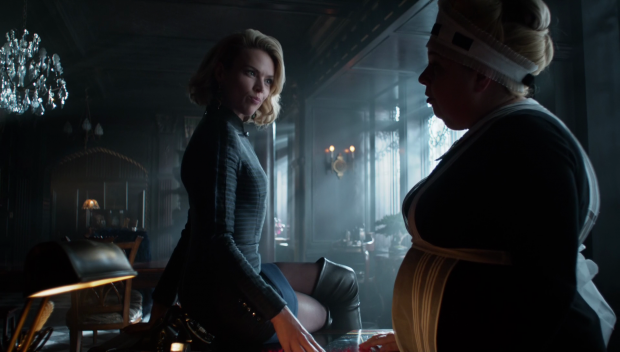 Is it a new threat, yet to be revealed, or is it one of the two seemingly minor problems currently playing out? Are we to believe that Alice’s blood is out there and ready to cause an epidemic? Or perhaps Penguin is supposed to be a weak point in the city’s structure, with too much resting on just one pair of shoulders to form a good foundation? I don’t believe either – yet at least.

For me, the Court of Owls has the same problem of inconsistency of power level that Falcone has, both of which stop me settling into their plot without questioning it. I’m in theory happy that the Court is very powerful. Bruce’s plot tells us this: he can’t challenge the Court at the moment. Fair enough. Also, its assassins have both previously been a match for Alfred – an ex SAS serviceman – and this episode made short work of the leader of the Whisper Gang. But now ask them to kill a doctor with no combat training? Can’t do it. And why? Because the great goddess Plot brings Jim in to save him.

I know, Jim’s the hero and all that. But the Court’s assassins can sneak up on two presumably well-trained criminals in an open dock area within which there’s nowhere to hide and yet they can’t take out one doctor? Yes, I know, the ‘making it look like a mob hit’ thing. I bought that with the car bomb; that really worked. But surely they’d be more competent when there are two of their sword-wielding assassins on the job? And the mob doesn’t use swords, yes?

I might not even have been thinking about this though, if wasn’t for Kathrine’s stereotypical bad-guy comment about what’s coming – oooh! Perhaps something new will turn out to be coming and her talk is supposed to be foreboding. I just can’t conceive of what it could be.

I made it myself

It must be part of Mario’s plot to come if he’s the target for assassination. I’d briefly considered Butch, Nygma and Penguin all at war being the predicted chaos but the Court could solve that by simply killing off Butch, and possibly Nygma too if needs be? This would be very much in their interest if they can control Penguin. So if it is Mario then there’s probably more to be revealed, so I should just be patient?

But again, all that I’m struggling with comes from somewhere before: Falcone. I promise I won’t write this again after just this one more time: How can Falcone be retired and not dead? The only way I can see it is if he’d handed power to a family heir who couldn’t bring themselves to bump off good ol’ Papa Carmine. As it is there’s no good reason for Penguin or the Court of Owls to leave him alive, as he could be used by any challenger as a figurehead to rule through at worst and be a troublemaker by himself at best. Oh, and surprise, this episode he threatens trouble.

You might argue that the Court likes to have Falcone around as a contact but if he were that useful then why let Penguin replace him? And if he’s not that useful then why not save yourself some future trouble by arranging a little accident. Oh, but they’re not very good at that.

Consistency is still the key concern for me, just as it was when Cat got captured in ‘New Day Rising’. She suddenly had to be bad at stealth and thievery just so Clone Bruce could show his powers – consistency losing out to plot needs. It’s not that I chase this for the sake of some pointless opportunity to show off I’ve noticed something, it’s directly about my enjoyment: The consistency would allow me a greater understanding of what characters are capable of and so what effect I’m expecting plot to have on them. In turn this leads to greater surprise and also trust when something I’m not expecting happens – I’d then be able to trust that the unexpected has important meaning. 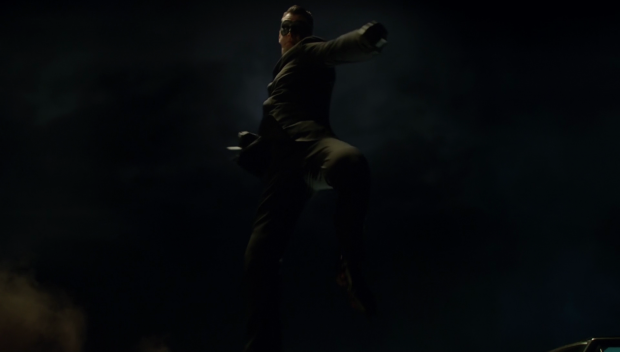 Takes ’em a while to get going but when they do…

Take Katherine as an example. If I’m not sure how powerful the Court of Owls really is then how can I judge what sort of threat is on hand when Katherine says something like “you don’t understand the chaos that’s coming”? If I were confident the Court was supremely powerful I’d know to take the threat very seriously.

How about Lee as another example? I’m now unsure how mature she is in matters of love. Previously she’d always managed to avoid overreacting to Jim’s problems like a sitcom or soap character would but now she’s returned to Gotham City, no less to a job in the same office as Jim, and she’s marrying into a crime family? What about this doesn’t trigger alarm bells? How wise is she really then? (Interestingly, with that farewell kiss she gives Jim this week I could really see her as the femme fatale from the noir TV show I’d once thought Gotham could be but that’s a far cry from the GCPD medical examiner we’ve seen before.)

The problem even extends to something as simple as Barbara repeatedly making her way into Penguin’s manor house. How powerful can the king of Gotham’s underworld really be if a single person can get in whenever she needs, put a gun on him whenever she wants and question his staff whenever the whim takes her? Maybe she’s the Plot Goddess.

To be fair to the other characters this week though, I think they’re all on track with who they’ve ever been. Bullock and Alfred get their comic lines, Bruce and Selina still struggle with romance and then there’s Ivy: Yes she stupidly leaves the protection of Wayne Manor but that’s splendidly in character for a girl who’s full of overconfidence and who probably can’t believe there’s a man yet she can’t manipulate. 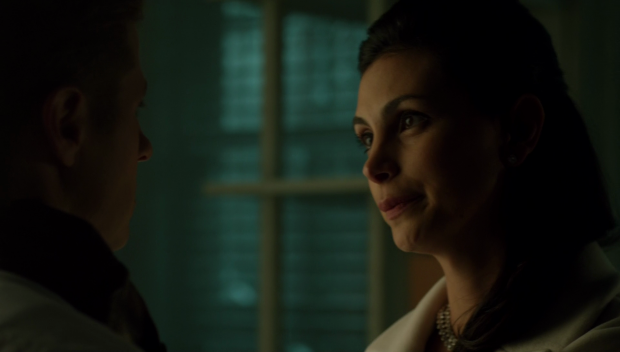 And she does have powers then, answering my question from last week. Though she uses natural plant extracts (hmm, can’t get to a shampoo joke) she somehow manages to alter them with her own body chemistry – yeah, that works nicely.

Better though, is that she has sustained development of character, which even now I’m not sure we see with Tabitha, whose plot this week still seems to leave me a little cold. I know that she liked Butch but was quite happy to believe she didn’t love him; but then suddenly she is prepared to lose a hand for him? I suppose then, that choice was a surprise twist but for the most part Nygma’s little trick of offering a deal he knew wouldn’t be accepted was only a shock for Butch.

Makes me feel like I must be quite heartless to think about it: Surely giving a person the choice of saving someone’s life or losing your own hand is a horrific thing? Yet the impact on me didn’t feel so large? I like Butch as a character and I can’t fault the actors for the scene at all – who were all perfectly well committed to it – so why?

Perhaps it’s just a speed thing again. Without feeling that Tabitha has had much development as an individual character maybe the plot has moved too quickly to this point for me to feel connected to her. I got as far as to think ‘oh, so she does care for him then’ but that intellectual response was my limit – no emotional engagement. I had a related problem with the speed the Whisper Gang were defeated. They actually seemed quite interesting but now they’re gone as fast as they appeared I’ll never really know. 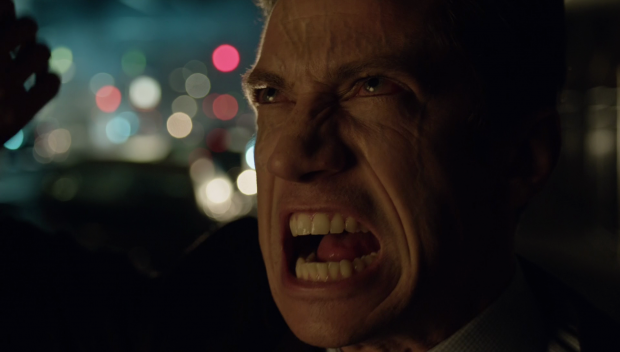 Whereas I’m finally on board with the Court of Owls as a season villain I’m still struggling to properly understand how powerful they and their assassins are and so what threat can possibly make them stand up and take notice. To be fair to them I think this is less their impact on me as it is season three’s inconsistency when it comes to characters’ strengths and abilities. Even now I think characters are more what the plot needs them to be rather than consistently developing people.

Despite this I’m very intrigued still by Bruce’s interactions with the Court and I’m glad Ivy is in Bruce’s plot, as that side of things is quite solid. Jim’s plot by contrast seems weighed down by a nothing-much love triangle and a randomly placed Falcone family.

Perhaps the balance lies with Penguin, Nygma and Butch. I’d thought a war between Nygma and Butch with Penguin looking awkwardly on might be interesting but we’re passed that now. Certainly there’s a fight coming but will it last even to the mid-season finale?