iZombie puts Liv on the brain of an racist intolerant dowager as Clive and Dale work at maintaining their relationship while Major struggles to keep the peace.

After the significant status quo changes this season it’s almost comforting to know that the classic iZombie formula of “Liv eats a brain to solve a murder while comedic personality changes happen” still works in this new and different world. I also can’t help but feel that the formula is starting to wear a bit thin though that might have something to do with the alternate personalities being far from the best in the previous episode and this one. 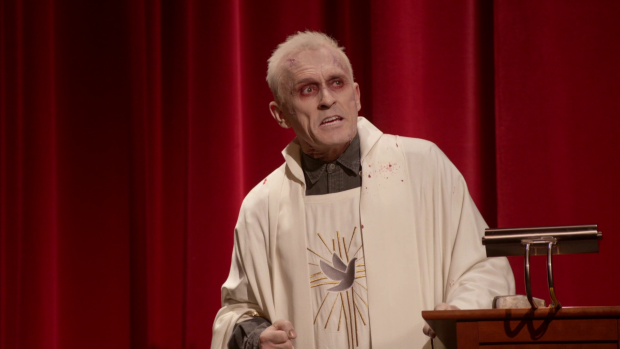 Angus preaches to his followers

This week Liv becomes really unpleasant on the brain of a rich entitled old woman. She becomes casually racist, dismissive of pretty much everyone who isn’t her and generally unbearable to be around. Bearing the brunt of this as always is Clive who thankfully hasn’t become any less entertaining after finding out the truth about her. Instead of acting impatient and confused with Liv’s alterations in personality he flirts between being entertained and generally frustrated. He recognises the valuable resource her visions can be but finds the randomness of her behaviour to be a barrier to doing his job. This episode makes that particularly clear with her unhelpful comments and demanding attitude frequently getting in the way of his police work to the actual detriment of the investigation.

Something fairly new is attempted here with the fallout of Liv’s shift in personality in that there is some remorse for her behaviour. We don’t normally see this when the brain wears off as it is normally dismissed as a piece of harmless entertainment that amused those around her for a while. This time is different because she became devoid of empathy and full of self entitlement. When finding the killer she dismisses the dying child because it isn’t her problem and feels terrible about it once the brain wears off. She’s unable to live with herself knowing that she has the ability to prevent a child from dying and she genuinely didn’t want to do it. Of course her saner head prevails because the hero of this show can’t be letting young children die but the attitude is distressing both to her and the audience.

This opens up a wider set of questions about the effect the brains have on her. I have to wonder how much consent is actually involved in her actions. Back in “Looking for Mr. Goodbrain Part 1” Liv had sex with Chase Graves despite that not being something she would normally do. In that same episode she is shown to be resisting the urges brought on by the brain suggesting that there is an element of self awareness. The problem is that the urges brought on by the altered personalities mean that she is often unable to resist as we frequently see from the dramatic shifts in her personality. This is something the show has to address at some point because this episode sees her pursue a sexual relationship with Major. Arguably she knows exactly what she’s doing and is actively choosing not to resist but equally she could be a prisoner to a dominant personality. In this case it’s played for laughs with jokes about new positions but there’s something more distressing and sinister lurking beneath the surface. It’s something that could make for an interesting exploration of what it really means to be a Zombie. 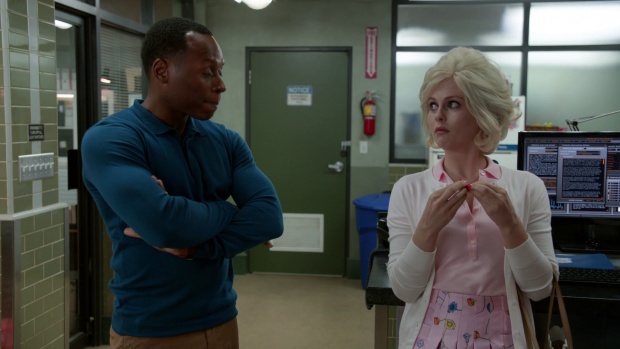 The case itself is fairly standard with a mix between police work and vision assistance. Once the sick child is introduced it’s clear that Mrs. Brinks Chef (Linda Park) is the most likely candidate as the killer. It’s handled well enough by establishing how repugnant the victim is and making some attempt to make the killer sympathetic enough for her motivation to be at least understood. She does everything for her son and gladly accepts her punishment but only wants to ensure that her child survives. Her reasons were noble even if her methods weren’t.

Liv’s decision to help her son organically adds to the world the show now lives in by establishing an Underground Railroad of sorts run by Mama Leone (Dawnn Lewis) who claims to have met Liv and Ravi before. It’s likely that this will come up once again in the future and I hope it does because I like the idea of a group tasked with smuggling people out of the quarantine zone to cater for circumstances like this. Introducing this helps make the city feel more lived in with a lot more depth to it. Different factions can be difficult to keep track of but this show has always juggled multiple concepts with sophistication so there’s room for this to grow.

The attempt to cross the border brings some associated tension when Filmore Graves ask questions and bring Major in to assess the situation. It’s a loaded scene because Major is so obviously torn between his duty along with his loyalty to Filmore Graves and his connection to Liv. It’s a difficult decision and based on how the character has been portrayed so far this season his decision isn’t immediately obvious. Ultimately he decides to look the other way this time but a later discussion confirms how risky that was for him personally. Liv challenges him on how much he has changed and reminds him that the Major she knows would have done anything to protect a sick child. 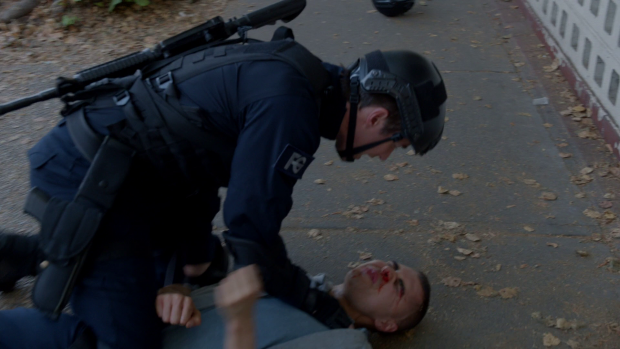 Peacekeeping gets out of hand

Unfortunately he doesn’t see life as black and white as he once did so has to consider the bigger picture when making certain decisions. He’s doing what he can to improve life for Zombies in Seattle with his Zombie youth program which he sees as something of a compromise that can be used to improve things in some small way. We see that life has improved immeasurably for Jordan (Jade Payton) and Captain Seattle (Jake Manley) who have the opportunity to be a part of an organisation that rewards loyalty with security. This middle ground isn’t nearly enough for Liv who resents the quarantine situation and blames Filmore Graves for it which contributes to the difference in opinion between Liv and Major. It gets so bad that Major suggests that they stop sleeping together out of convenience because of their strong oppositional views. This was introduced and ends in this episode which is a shame as it robs us of the opportunity to see them together before inevitably tearing them apart.

Major has bigger problems with his army of Peacekeepers. The streets of Seattle are on the cusp of becoming a war zone and Humans don’t take kindly to Zombies enforcing the rule of law so there are a lot of riots. The situation escalates and inexperience on Major’s team results in a Human being accidentally scratched almost resulting in his friend killing him right there on the street. This is a small example of a citywide problem that will only get worse as the population becomes more frustrated. This brings in the class divide as those on the streets are struggling to survive day to day. This applies to both Humans and Zombies so once again civil unrest looks very likely. 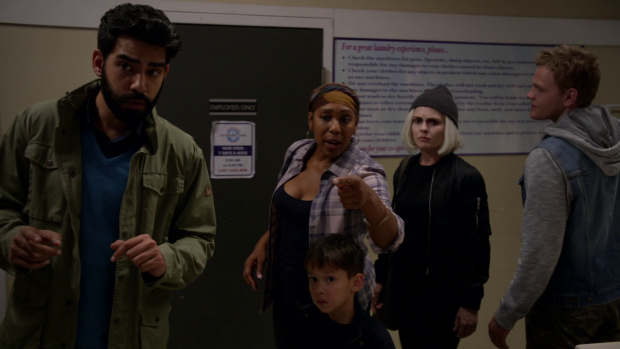 A sneaky way out of the city

Helping with this area is Angus and his band of faithful Zombies. He preaches the word of God and hands out free brains to those who need them which likely keeps the situation under some form of control. It’s difficult to determine if Angus is building up to creating an army as he mentioned last episode or if his desire to help other Zombies is genuine. Creating an army could be interpreted as a band of faithful followers to his religious teachings so it could go either way at this point. For now he seems altruistic and a little crazy which definitely works.

Further character based problems with the new status quote are exemplified through Clive and Dale’s attempt to have a relationship despite Dale being a Zombie and Clive remaining Human. This particular issue was explored through Liv and Major in the second season with the resolution of them deciding that they were better off apart. Clive considers taking drugs to reduce his libido after a hilarious conversation with Ravi but Dale refuses to let him do that and promises to figure something out. Clive being a realist clearly sees the inevitable conclusion to this relationship and I suspect it’s only a matter of time before he decides that it can’t work as long as they are a different species. 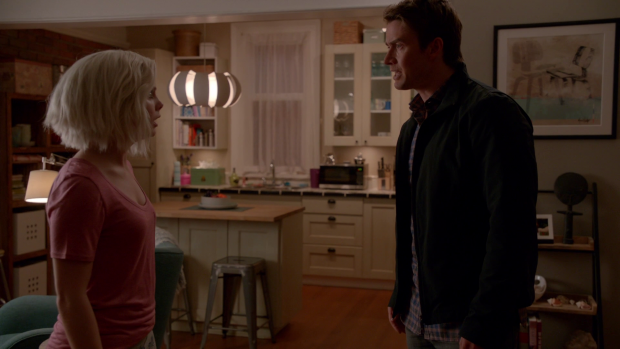 A strong episode that continues to build the new status quo by feeding the main plot into the background elements. The introduction of an Underground Railroad of sorts is a really good idea that helps the society feel more lived in. Combine this with the growing civil unrest and there are a lot of smaller elements making up the tapestry of the show at this point. The whole thing is still broadly character driven with a really effective disagreement between Major and Liv after he looks the other way to benefit her. Character motivations are complex with no clear cut idea of what is right and wrong at this point.

Liv’s brain is a fairly unpleasant one this week which is somewhat off-putting but the consequences of her becoming a terrible person are addressed in part while opening up a host of other questions surrounding the effects of the brains and what that means for the person experiencing them. Clive and Dale going through the same Human/Zombie relationship issues that Liv and Major experienced in season 2 is somewhat repetitive though interesting in its own way. There’s certainly a lot to build on here and I hope for a more pleasant brain next week.