iZombie adds darker shades to the world of a walled off Seattle as Liv finds herself on the brain of a hopeless romantic looking for her true love.

I’ve praised this show time and time again for juggling tones expertly. It consistently manages to juggle dark, emotionally rich storytelling with excellent comedy along with a multitude of other aspects. It’s all part of the framework of a TV show that takes itself very seriously while not being afraid to have fun with its premise. 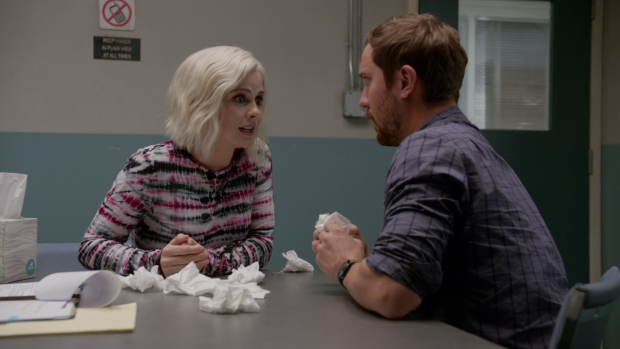 Episodes like this prove it can work as Liv’s brain of the week is that of a hopeless romantic who wants to find true love and settle down. It’s an ambition many people have but in true iZombie tradition this episode dials it up to the extreme by having Liv’s behaviour be almost cartoonish. This often works because we never get a sense of who the victim was so have no idea if they were actually like that or if Liv consuming the brain amplifies those traits. My theory is that emotions are intensified at the moment of death so Liv experiences a heightened version of their normal selves due to the trauma associated with their death. It doesn’t work in all cases if people were killed in their sleep or something otherwise non violent but it holds up most of the time.

Her romantic brain is obsessed with Bridget Jones’s Diary -a film I haven’t seen- and uses that as the model of what true love should look like making references to characters that I don’t know to illustrate her point. From context I can tell that one is supposed to be better than the other but I have no idea why so the reference is completely lost on me. Still, it’s far from important as it’s easy to understand what lovestruck Liv wants out of life. The episode completely leans into the cheese factor by introducing each of her infatuations to the tune of “Truly, Madly, Deeply” by Savage Garden and having her acting deliriously giddy whenever in contact with any of the men she is convinced that she’s in love with. Her interaction with Allan Fox (Veronica Mars alum Sam Huntington) is delightfully unsettling.

She comes on so strongly because the previous owner of her brain was infatuated with him and it transfers to her. His reaction is priceless as he doesn’t know what to do about this unexpected attention even though it’s fairly clear that he’s at best painfully naive and at worst a complete weirdo. Clive certainly seems suspicious of him considering how besotted he is with a woman he has never met though the episode rules him out as a suspect as he’s ultimately harmless if a little misguided. 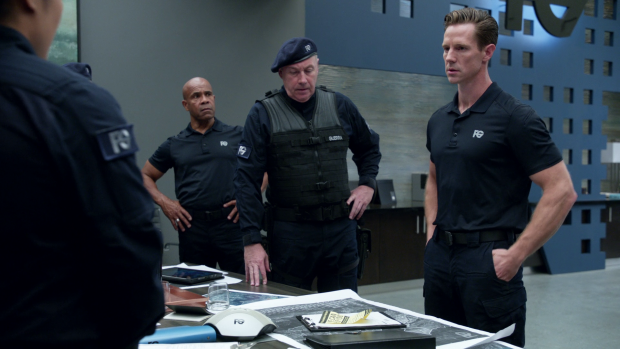 Chase has a lot to deal with

Further good use of the brain is made by allowing Liv, Ravi and Peyton to go out and let off some steam without tying it into the overall story in any significant way. Such diversions could easily be labelled as disposable filler but in this case it’s an opportunity to explore the world and the characters that live in it. In this case Peyton has some opportunity to shine for the first time this season. The first episode suggested that she was part of the privileged elite in Seattle and had lost touch with those outside that tier in society. While her contribution to this episode doesn’t entirely counter that there’s a strong sense that Peyton hasn’t really changed at all. Her loyalty to Liv as a friend is still as strong as ever and she still manages to be on good terms with Ravi periodically.

A lot of the comedy in this show is mined from how people react to Liv’s personality shifts. Peyton flirts between frustration and terror with no real idea how to deal with Liv’s altered personality on her own. She begs Ravi to accompany them to a Human/Zombie mixer at The Scratching Post so that she has some form of moral support and Ravi delights in being reluctant to do so because he’s somewhat bitter that their relationship ended. Such is his right and Ravi is in no way spiteful about it instead taking his revenge by watching her squirm. Even when he ends up coming along after a hilarious dress up montage, he ditches them almost immediately to go dancing with some Human girls. It’s a hilarious set of character exchanges that feel completely natural.

The clubbing scene isn’t necessarily about developing the characters in a meaningful way that informs their arc for the rest of the season as the main intention seems to be allowing them to have some fun in a really bleak situation. Some mention is made of Peyton and Ravi as a potential couple with loved up Liv championing them and Peyton dismissing the idea without seeming entirely against the idea for a brief moment. She is on her way to being drunk at the time which may warp her perception or leave her open to the idea but either way the door isn’t completely closed. 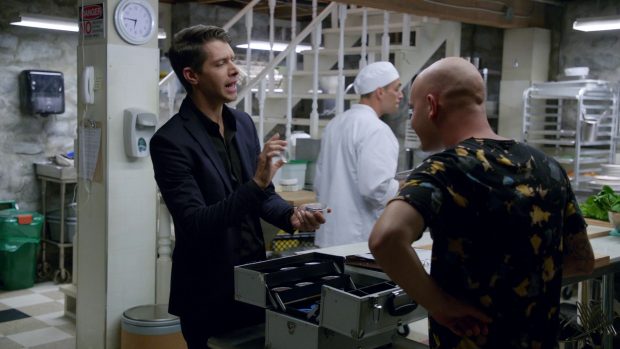 Trying to make a sale

Clive and Dale’s relationship is picked up from last week then Liv sees Dale apparently being unfaithful to him and resolves to break the news to him when she next sees him. Of course she fails to do this and the thread is left to linger for a while longer. I suspect the answer to this will be that Dale and Clive have decided to be in an open relationship to satisfy the needs that the other can’t provide while still maintaining their connection despite the interspecies handicap. I suspect that Liv won’t have considered this and the reveal will likely be deflated in a way that promotes an alternative yet valid life choice.

The case associated with Liv’s brain leads the show into really dark territory by revealing that there is a serial killer at work. The killer in question operates under the pretence of sneaking people into Seattle for whatever reason they have and then killing them to sell their brains on the black market to provide supplies for both Filmore Graves and Blaine’s businesses. We don’t have the detail because this is only the first part of a two part story but I get the impression that Filmore Graves selectively looks the other way to keep the ever growing population of Zombies fed. This certainly seems to be supported by the fact that Chase makes morally questionable deals with Blaine. Looking the other way could simply have a lot to do with not scrutinising where Blaine gets the brains that keep the masses fed.

A good chunk of this episode is devoted to world building in really interesting ways. Filmore Graves are dealing with three direct problems at this point that are in no particular order of importance but all need handled urgently. One of them is something called “The Darwin Project”, an initiative that offers Zombies a lot of money to escape Seattle and donate their bodies for research of some kind. Another is the aforementioned brain shortage that is about to reach a critical starvation point that will result in Zombies becoming mindless creatures. The final problem is that footage of Jordan scratching a Human while in “Rage Mode” exists and is at risk of being leaked. All of these issues naturally risk Filmore Graves losing their hold on Seattle and allow the situation to spiral completely out of control. Reminders that Seattle is a delicate ecosystem on the verge of collapse maintains tension nicely and builds naturally to the inevitable end game. 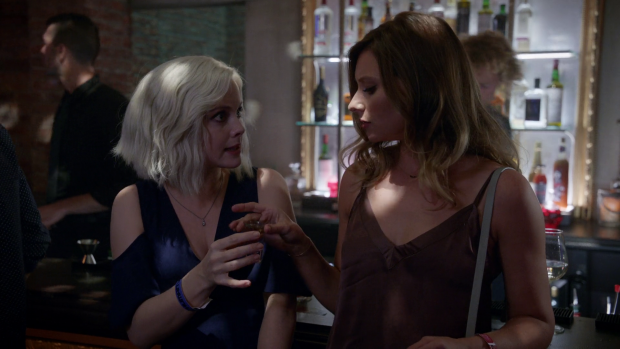 Letting off some steam

Another development is the idea of the Coyotes introduced last week with different factions of them at play. Mama Leone’s visit to Liv supports the idea that she’s genuinely altruistic. Dawnn Lewis’ performance is full of compassion as well as earnest realism about the situation. She hopes to save everyone she can but is aware that she doesn’t have the resources to get to everyone. The people that killed the previous owner of the brain Liv is on are an example of her ideals perverted into something both evil and selfish but Mama Leone will do everything she can to help those she can get to. Her advice to Liv about never forgetting those who fall victim to people lying about helping them is about as real as it can get and serves as a reminder that no life is insignificant. There’s an argument for trying to forget about those who couldn’t be helped because dehumanising them helps make it easier to function but Mama Leone is of the opposite view. I definitely look forward to seeing more of her.

The final piece of additional world building is around Blaine’s brain business and where his supplies come from. Naturally it’s all linked but there is word of another business at work serving as competition. Blaine reminds Dalton (Ryan Devlin) that he has to be the first choice in every instance with absolutely no exceptions otherwise there will definitely be consequences. Considering Dalton might be his sole supplier it’s probably an empty threat but David Anders can deliver an intimidating threat at the drop of a hat so it comes across as highly believable.

Episodes like this are fairly light on problems though I’m unsure why this case needed to be a two part episode. In fairness it gives away to characterisation and world building but in terms of actual information about the murder it takes far too long to return to it and navigates away from it for so long that it is almost forgotten. All of the secondary plots were really well integrated but momentum was lost and never really recovered. 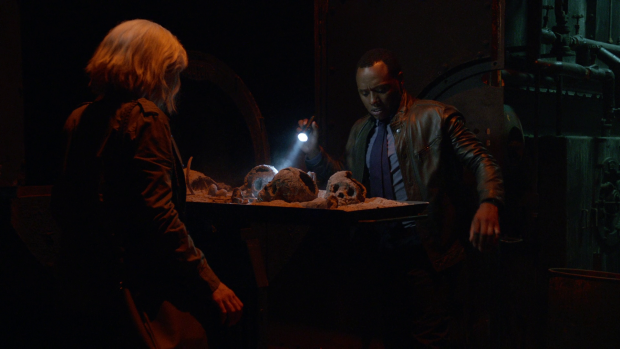 An excellent episode that provides yet another example of this show’s ability to juggle tones expertly. The drama in this episode works really well as does the world building and the time spent allowing the characters to let off some steam in a way that doesn’t build on many character arcs or move the plot forward but manages to justify its existence none the less. Liv on hopeless romantic brain is incredibly entertaining throughout and the reactions of the other characters enhance this immensely.

A lot of the episode is devoted to world building from the various problems being dealt with by Filmore Graves, the handling of where Blaine’s brain business stock comes from and the idea of various factions of Coyotes with different agendas competing with Mama Leone who seems to genuinely want to help people. It all adds to the growing tension and reminds the audience that Seattle is barely holding together and things will escalate at some point. The only real problem this episode had is the murder plot suffers from a loss of momentum due to barely focusing on it for a lot of it. It was pushed aside in favour of world building and background elements but the episode struggles to get back on track when reintroducing the investigation.