iZombie concludes the story that started last week with a continuation of Liv’s hopeless romantic brain and the hunt for a serial killer.

Usually a two part story requires enhanced stakes to justify the narrative running across two episodes instead of one. The previous episode made the case feel unimportant by forgetting about it until towards the end and this episode fails to pick that up in any meaningful way. The declaration that a serial killer is on the loose before carrying it into a second part carries with it an expectation of urgency suggesting that this case is more than just run of the mill. 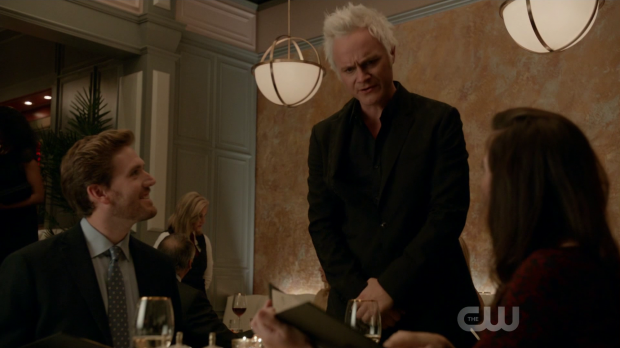 Unfortunately the opposite is true as very little attention is given to the serial killer plot at all. The episode begins with Liv and Clive on a stake-out waiting for any clues as to the killers whereabouts and the conclusion involves Clive letting Ravi doing all the work by posing as a stranded aristocratic Brit and baiting the killer into a trap. He has no character, there are no stakes and the plot itself just fades into the background leading me to wonder why this particular story merited a second part to resolve it.

This also means that the brain from last week carries over into this episode along with the unresolved plot of Liv’s frantic search for her new true love, Tim (Keenan Tracey). The hopeless romantic brain is really entertaining and thankfully the novelty doesn’t wear off with many varied and entertaining moments involving Liv stress baking, believing that everything is some kind of sign, desperately reaching out to Tim in the hopes of finding him and interfering in everyone else’s love life. Clive makes her aware that her interference is completely out of line and she has no right to be sticking her nose into her business.

He also points out that she can’t use the brains as an excuse for her behaviour which ties into the point I made two weeks ago about how much choice a Zombie has when under the influence of a brain. Clive likely doesn’t understand how powerful the personality shift is but he definitely has a point that it doesn’t excuse Liv for behaving in a way that makes others uncomfortable at best and offended at worst. It feels like it has been a long time coming and certainly opens the door for further exploration of the personality shifts and how much free will is actually involved. 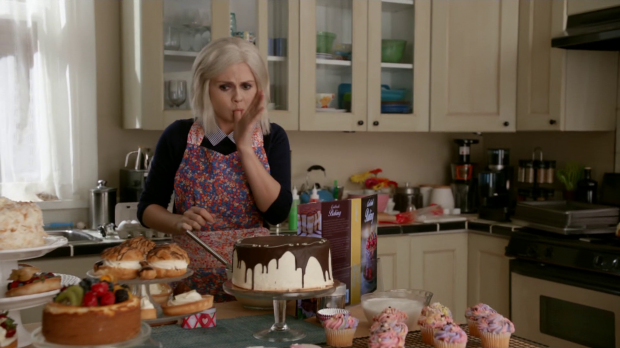 Clive’s outburst creates a temporary rift between them that Liv is fixated on repairing. She eventually comes clean to him about seeing Dale kissing another guy at the Scratching Post causing Clive to admit to her that they’re in an open relationship as predicted by me last week. Liv observes that Clive isn’t the sort of guy to indulge in an open relationship and he confirms that to be the case before opening up about being in love with Dale and wanting to make it work any way he can. He’s feeling really insecure about the relationship and hates the thought of her being with other guys but he can’t see any other way for them to be together so he’s completely stuck. It’s a rare moment of added depth for Clive and a fascinating insight into his state of mind. Moments like this feel significant as Clive is a private person by nature so it does makes sense that rarely opens up.

Liv’s arc in the episode involves resolving her intense infatuation with the mysterious Tim who amounted to little more than a not so romantic kiss in the previous episode. Against all odds she finds him but learns that he is unable to measure up to the fantasy she has created in her rom-com obsessed mind. The real Tim is a Zombie supremacist who sees Humans as nothing more than food leading Liv to fall out of love quicker than she fell into it and rejoin her friends who are her real soul mates because they stick by her no matter what. It’s a nice sentiment about the power of friendship and the strength of those relationships that have formed over time allowing Liv to complete her own personal romantic comedy where she realises that her friends are all she needs in life.

Despite the lacking two episode serial killer plot and associated brain the episode still excels at the background elements. Major takes Captain Seattle and Jordan to find the video of Jordan scratching a human while in Rage Mode. It has already been established that if it leaks then it could prove dangerous while compromising Filmore Graves as an organisation. There’s very much a “by any means necessary vibe” to this scene which plays out in a really concerning way as Major casually shoots up a bar and ignores things like civil rights in pursuit of this goal. No matter what way you choose to look at it this is an abuse of power and truly terrifying especially when linking it to things that go on in the real world. It’s also surprising to see Major going along with this so willingly considering his strong morality in earlier seasons though his reasoning has yet to be fully explored because he has yet to be called out on his approach save for a quick argument in the second episode of the season. 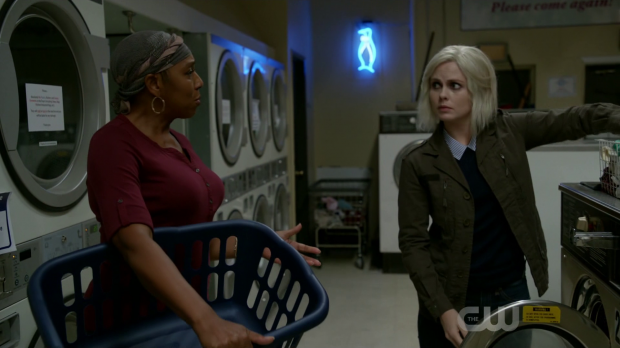 Major’s investigation leads him to Angus who offers a significant contrast to the approach taken by Major and the rest of Filmore Graves. Tucker (Jaren Brandt Bartlett) finds both acceptance and salvation at Angus’ church as have many Zombies in these less than ideal conditions. Angus hasn’t been identified as an antagonist at this point and may never be based on his actions so far. His role in this episode is to act as a counter to Major by pointing out the ways he has changed. Major used to be the one working to save Zombies instead of policing them. He has become the opposite of what he once was and is blinded by the belief that he’s doing the right thing in a situation where it’s very difficult to do the right thing. This season thrives in the moral grey area and Angus has certainly given Major something to think about that may colour his perceptions of his actions in the coming episodes. He hasn’t specifically been called out on what he’s doing but the way he thinks has been called into question and that could make for an important first step.

The other background element that is developed is Mama Leone and her approach to helping people. Her attitude is one of true altruism and a refusal to let people suffer through inaction. When she was first introduced she indicated that she knew Liv and Ravi but didn’t explain why. This episode fills in that gap through the use of flashbacks by revealing that she was turned into a Zombie way back in the timeline of season 1 and had Blaine supplying her brains. She let this continue until visions of the murdered children those brains came from made her feel guilty. Going to the police accomplished nothing as Lieutenant Suzuki covered it up before her husband was killed as warning. After that she lay low until the current crisis where she is in a position to help people and refuses to let people suffer when she can do something to alleviate that. 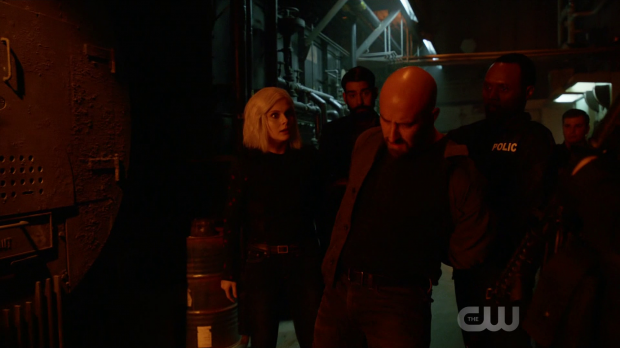 It’s a bit of an info dump and plays out as somewhat clumsy exposition but Dawnn Lewis completely sells the sincerity of Mama Leone’s story. Having her captured and delivered to Chase Graves by Blaine will likely bring in Liv’s connection to Major which should create further potential for Major to question his position.

Liv’s romantic brain isn’t the only source of altered personality entertainment in this episode. Blaine is dealing with the personality of a loose lipped snitch that forces him to be brutally honest about everything. There are many hilarious moments associated with this such as telling the truth about what the exaggerated brain information on his menu actually means or explaining how his business really works to his customers in a really matter of fact way. David Anders delivers it with his usual skill and enhances the comedy.

Major on the brain of a wrestler is deliciously over the top and adds a unique spin to fairly bland heart to heart conversations with Liv. The contrast between the tone of his voice and what is being said is where the comedy lies with an excellent performance from Robert Buckley that fully leans into the ridiculous nature of it. For now this patches up the argument between Liv and Major but I suspect that won’t be for long. It does feel strange that Major flips from his militaristic morally questionable actions to full on wrestler in the space of a single episode but it’s a testament to this show’s ability to juggle tones. 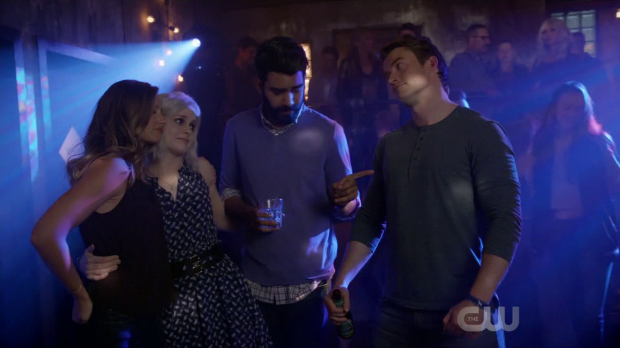 A solid if somewhat underwhelming episode that doesn’t justify needing two parts to resolve the serial killer plot but excels in the characterisation and development of the background elements. The serial killer plot doesn’t really amount to much with a resolution that fails to live up to the expectation of urgency. Liv’s hopeless romantic brain continues to be entertaining with a variety of content associated with it including a strong positive friendship message as well as Clive becoming frustrated by her behaviour and pointing out that she’s out of line. As far as he’s concerned the brain is no excuse for acting that way. This episode allows for some depth to be added to Clive in a rare sighting of him opening up about his open relationship with Dale.

The background elements such as Filmore Graves and their morally questionable actions when Major goes out looking for the footage of Jordan scratching Tucker when in Rage Mode. His actions are are definitely problematic and it is pointed out by Angus that he is a far cry from the man he once was. Later in the episode he’s in full on wrestler mode thanks to a brain so it’s a discussion for another time. The reveal of Mama Leone’s back story is a bit of an info dump but well acted and really illuminating about her motivations. Her capture by Blaine to be turned over to Chase Graves is a compelling tense setup for the coming episodes. Blaine on a brutally honest snitch brain is another source of entertainment thanks to David Anders’ impressive acting ability and comedic timing.