iZombie explores the world of LARPing (Live Action Roleplaying) when Liv ingests the brain of someone heavily into the pass time.

I say this episodes explores the world of LARPing, it would be more accurate to say that it makes fun of it with very little affection thrown in its direction. Given that last week was trying to mine comedy out of a promiscuous player brain it’s somewhat insensitive to be making fun of something that many consider nerdy especially when considering the overall premise of the show and the fact that Ravi is a character. I’m personally not into LARPing though I acknowledge that many people are so I would have liked to see the episode approach it with a little more tact. Making fun of things is fine but this show is normally good at bringing the other side to show why it’s so celebrated. 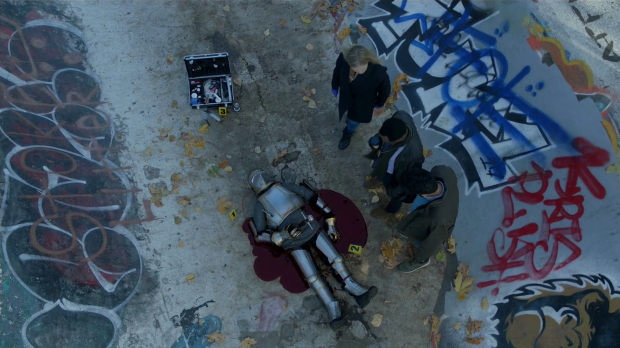 That’s not to say the episode doesn’t amuse. Liv spends pretty much all of it talking like she belongs in a renaissance fair and the talents of Rose McIver are more than enough to prevent this decidedly one note joke from becoming stale. She fully commits to everything about the brain including the voice, the intonation of her speech and the posture that comes with it. It was a true transformation and was played well though could be quite jarring in moments that were supposed to be more serious.

Other funny touches existed throughout the episode such as Clive’s impatience with the whole thing and his suggestion that a live action Dungeons & Dragons sounded cool before seeing the group of people who participate and promptly deciding that it really isn’t cool. Once again this is an example of making fun of something that people like without offering up any counter argument to acknowledge that there are positive aspects to it but Clive’s deadpan reactions to things that he encounters always amuse.

The case itself wasn’t the best thanks to the obvious attempt to connect the motivation behind the murder to Clive and Dale’s open relationship. Having the murder victim be a Human sleeping with his Zombie friend’s Human wife was too on the nose as connections go with the main difference being that Clive and Dale have agreed to have that sort of relationship where the murder victim went behind his friend’s back. Creating a personal connection between the case of the week and the lives of those investigating it is a solid structural idea that has sustained many a crime procedural but this link felt lazy. 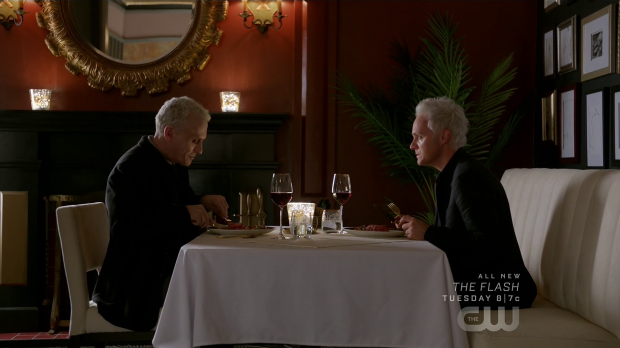 It also doesn’t help the Clive/Dale story because there is no real progression with it. They continue to have the same conversations over and over again without advancing in any meaningful way which suggests that it wasn’t all that well thought out as a plot point. Either the characters need to accept their open relationship or break up because this holding pattern they have established is neither interesting or a good use of the characters.

Liv’s current brain altered personality bleeds into her new role as Renegade in the way you might expect. She talks about scratching people as if it was some form of divine quest that she was meant to undertake. She also becomes a Knight in shining armour for the people that she helps which does add to the mystique of renegade to a certain degree. The real meat of this story is the ending where Liv scratches Isobel (Izabela Vidovic) who doesn’t turn and gives the show it’s first case of potential immunity to the Zombie virus. It had to happen sometime and the potential implications of this are numerous.

Elsewhere in the episode Stacey Boss returns after smuggling himself into Seattle to retrieve money from his former accountant. It’s not the greatest motivation but having Stacey Boss back in the mix is definitely a lot of fun. His scenes with Blaine and Don E are wall to wall entertainment. Connecting Angus into all of this feels like a natural fit even if it does corrupt the religious group somewhat when they are shown to be attacking people to get more brains. Angus hasn’t always been the most virtuous of people but it seemed like he had gained something of a zest for goodness following his recent religious epiphany. Apparently that doesn’t extend to killing Humans to consume their brains which I suppose makes sense for a group of hungry Zombies though exploiting the “religious people are dumb” trope doesn’t feel appropriate especially where Angus is concerned. Last week he was calculating, charismatic and determined where this week he is very easily led by Blaine’s tale of divine intervention. I do hope that there is a larger scheme at work here and that Angus was simply playing dumb. 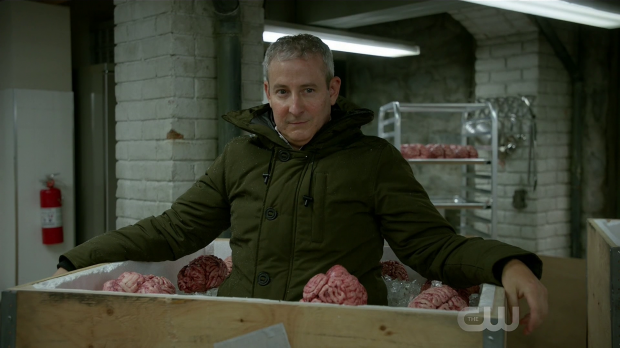 The return of Mr. Boss

The massacre itself was a really entertaining scene. Not much of it is shown but Blaine, Stacey and Don E’s reactions more than made up for that. Their alarmed descriptions of the carnage seen before their eyes was even better than showing it because it allows the episode to lean into the comedy and turn a horrific situation into an amusing one.

Stacey’s return looks to be on its way to connecting with Peyton once again. She has already spent the money by helping Liv fund her role as Renegade so she will most likely wind up right in his crosshairs which we know to be a very dangerous place to be. This should bring Peyton more out of the background and give her a plot that allows her to match wits with Stacey Boss once again. This worked really well before so should be intriguing once again.

Peyton’s reaction to finding out Liv’s secret was about what I expected of it. I mentioned last week that it’s not much of a cliffhanger because I wasn’t overly concerned about Peyton not being on Liv’s side. Her immediate desire to help is perfectly in character and helps contribute to the Stacey Boss story without initially appearing so. It’s a good example of different elements coming together informed by the characters involved in them. 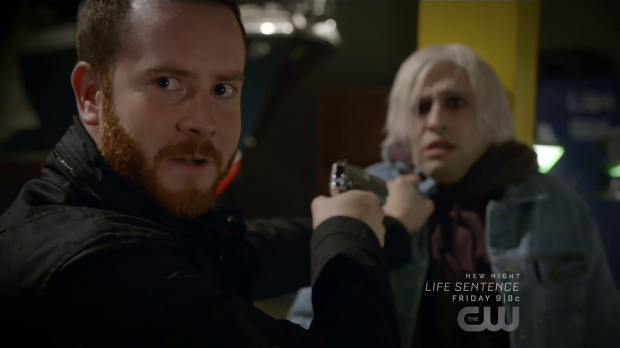 Major once again struggles to find a defined place in this season. It feels like every episode is a showcase for him doing something else for Filmore Graves with limited success. This week he follows up on his orders to befriend Russ (Giacomo Baessato) and follows him around on his illicit adventures. I feel like this is an attempt to make Major’s actions seem far less terrible by comparison though the show hasn’t really addressed where his allegiances lie. He does seem loyal to Fillmore Graves but also has moments where he appears to doubt this so it’s completely unclear what the plans for Major are. There’s a sign that he isn’t too far gone in this episode when he fakes the result of a coin toss in order to spare a Zombie from being killed.

The trouble with this is that it feels like little more than a diversion for a little while that won’t really go anywhere. It is more than likely that in an episode or two Major’s undercover nature will be found out and he’ll have to take some definitive action against Russ. Alternatively he’ll simply turn him into Chase Graves who will sentence him to the guillotine as Major looks on feeling guilty. 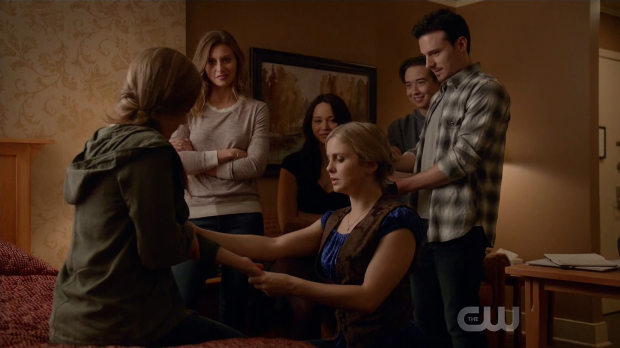 An uneven episode that certainly did amuse but had a lot of repetitive elements. Rose McIver fully commits to everything about the brain personality but it doesn’t quite make sense in more serious moments. I had issues with the episode’s stance on LARPing as it was continually made fun of without a decent counter argument offered up which is unusual for this show. Clive’s reactions to his discoveries about LARPing were really amusing though trying to connect the murder to his relationship with Dale is clumsy at best and that plot is pretty much the definition of repetitive at this point.. The brain did add more mystique to Liv’s Renegade role by bringing in the epic quest mentality that was a lot of fun to watch and the suggestion of immunity to the Zombie virus has all sorts of implications.

The return of Stacey Boss was welcomed despite how weak his motivations seem to be. It does look like those will connect to Peyton who has already spent the money he is looking for and have her move out of the sidelines. Stacey’s partnership with Blaine and Don. E with Angus in tow was really good fun even if Angus comes across as somewhat dumb now that he’s a religious zealot though this could be a long con on his part. The massacre scene was a lot of fun with the reactions making it more entertaining than seeing it ever could be. Major’s contribution to the episode leaves a lot to be desired as it appears that the writers don’t really know what to do with him so just pass him around various Fillmore Graves plots. This one in particular seems geared towards reminding the audience that he isn’t as bad as he appears but we shall see how it turns out.