So far this season seems to be mixed in the message it’s trying to project. Zombies are portrayed as if they are a persecuted minority group but that doesn’t work when considering the position they actually occupy in society. The most obvious position of power is Fillmore-Graves who control the police state that is Seattle which means that Zombies are actually at the height of power. Liv has connections to Peyton who acts as the defacto Mayor and the police through Clive as well as Dale so that’s another example of a Zombie in a position of influence. Blaine is the most powerful criminal in the city who is essential in ensuring a steady stream of brains which arguably gives him more power than Major. 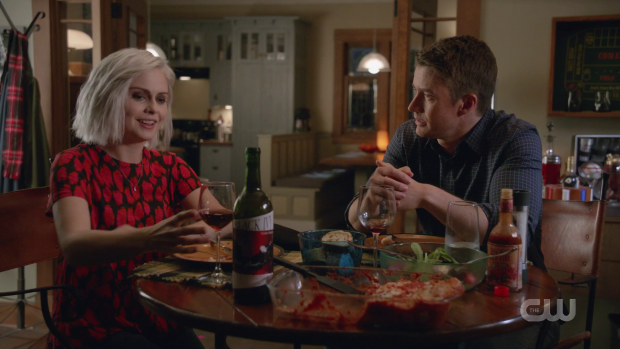 Major gets to open up

The trouble is that all of this is ignored in favour of furthering the idea that the Zombies are being oppressed by the Humans in the city. There’s hate and mistrust because of what they are but much of that comes from the power that they hold within the walled city rather than being hated for simply existing. I mentioned in my review of the previous episode that it’s somewhat understandable why people might blame Zombies for the current situation even if that doesn’t excuse how they go about expressing that. Whether right or wrong it would be natural to place blame in the direction of Zombies for everything that has happened. Fillmore-Graves themselves could be looked on with terror considering everything they’ve done so far.

It’s hard to see where the writers are planning to go with this. The Dead Enders have come up with “Whities” as a racist term for Zombies and there are extremists who don’t see them as deserving of existence so have no problem killing them but beyond that there isn’t a lot to this division. The racism angle doesn’t work for the reasons I’ve mentioned so it would make more sense to lean into irrational fear of what isn’t understood as the show can tell more relevant stories this way. It could take the show down the path of Humans and Zombies alike coming to realise that everyone in Seattle is being oppressed by circumstances as well a decisions made by those in power. It’s clear that the racism angle is coming into play because of events happening in the real world at the moment but improper judgements motivated by misunderstanding is equally as relevant to the modern world while being more in tune with the setup this show already has.

There are hints that the understanding angle is being explored through Jimmy’s portfolio of sketches provide social commentary on the state of Zombie/Human relations. Comedy and satire are often a good way to draw meaningful attention to issues by pointing out how ridiculous they are so it’s not a terrible idea assuming the content is effective. Peyton is initially unconvinced by the idea largely because of how much it would cost to put together considering Seattle is stretched to the limit in terms of its resources but comes round to the idea when she sees how it might skew opinion in the right direction. Her fundraising idea of selling the naming rights to the Space Needle will undoubtedly come back to bite her but for now it feeds into the overall sense of desperation that defines Seattle as a location and the people in it. 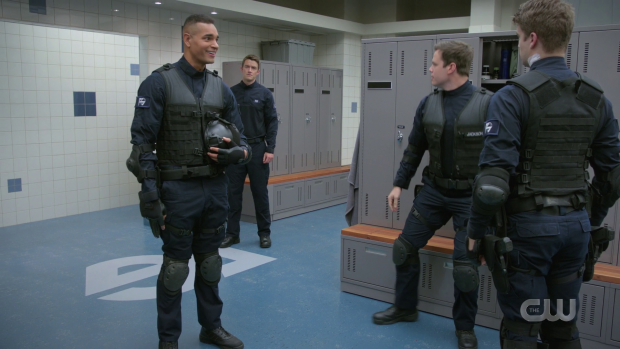 Always look both ways before complaining about the boss

The difficulties Major faces as the head of Fillmore-Graves take up a lot of screen time in this episode and with good reason. It is made clear that many under his command don’t respect him as a leader because they don’t agree his softer stance. It was always going to be difficult taking over after Chase Graves because of the way he commanded others and Major is starting to face the prospect of a mutiny if he doesn’t find a way to have his men respect him. There is a great scene following him hearing locker room talk about how ineffective he is where he talks about all the soldiers he has lost and shares personal anecdotes about every single one of them to highlight how much he cares and how deeply their lives are valued by him. It may not be enough to win them over but the main differences between him and Chase Graves is that Major cares about them on a much deeper level and takes time to appreciate them on an individual level. At the moment he’s doing things his way and hoping others will fall in line rather than altering himself to suit what those under his command want from him.

His conversation with Liv gives greater insight into the lack of confidence he has in his ability to lead effectively. He compares his perception of himself to a Buzzfeed Quiz where the result was Robocop but he feels more like C-3PO. It has the added bonus of being an amusing comment while also highlighting exactly what Major is expected to be against how he actually feels. Liv has no real answers for him though it is pointed out that he’s a good person who is trying to do the right thing under impossible circumstances which won’t always be popular. Major’s tenuous hold on Fillmore-Graves will clearly escalate over the coming episodes as his soldiers feel more uneasy. 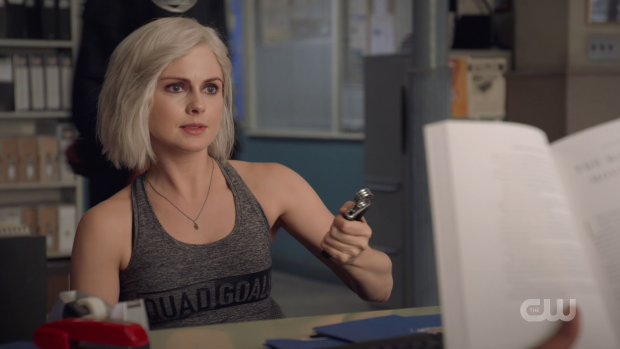 The escalating situation is explored through Baron’s death at the hands of Dead Enders who attempt to stop him smuggling more people into Seattle for Liv to scratch. Everything is becoming more dangerous and people are becoming more bold when acting against the Zombie population. This furthers the idea that there’s a massive conflict on the horizon and there will be more casualties before anything is resolved. Baron is in theory a significant loss for the show but he never quite stepped out of the periphery which dulls the impact of his death somewhat.

Major, Peyton, Clive and Liv’s collective decision to lie about finding the culprit responsible for the murder in the viral video opens up a whole host of problems. This comes on the back of them learning that Dolly staged the whole scenario in order to encourage anti-Zombie sentiment and militant action and is reluctantly agreed as the best way to combat this. In theory it makes sense as outing it as a hoax would likely have little impact but having people brought to justice for their crimes would send a clearer message that violence against Zombies won’t be tolerated. I suspect this will be more damaging when the truth inevitably comes out.

Liv spends much of the episode on “Fitness-Nut” brain though it serves no useful purpose other than attempts at comedy. Those are hit and miss by themselves but it’s jarring to have a brain personality with no connection to the case. It feels disconnected and makes it harder to invest in the case that is rapidly going nowhere. Rose McIver is still a delight and her talent for adding different personalities to Liv’s baseline one knows no bounds but without a strong narrative reason for having this it adds to the overall sense that this episode has bitten off far more than it can chew. 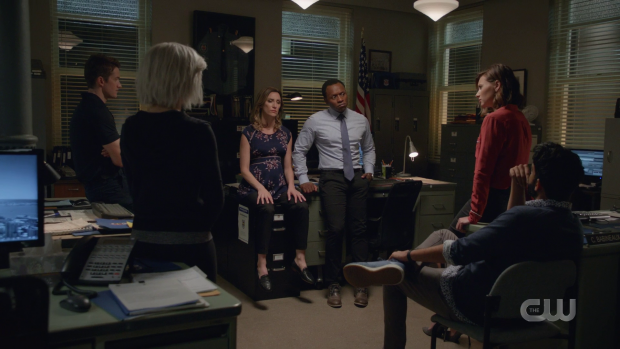 An uneven episode that has a lot of good ideas but lacks the time or focus to explore them fully. The idea of Zombies being a persecuted minority is best described as tone deaf as there are several examples within the universe of the show where that isn’t the case. It’s clear where the writers are coming from and what they want to achieve by it but it’s awkwardly executed and fails to acknowledge the current setup. It’s also not clear the direction this is supposed to go in because everything feels so muddled. There are some good things such as Jimmy’s portfolio of Zombie/Human relations sketches designed to humanise the conflict in a way that makes it seem comedically mundane. It’s the best idea on the table at this point and it remains to be seen how this will be received.

Major is facing difficulties being accepted as the leader of Fillmore-Graves as the soldiers don’t agree with his softer attitude and mock him for that. Major makes it clear that he values everyone under his command by sharing personal anecdotes about them but can’t help feeling like he’s out of his depth. The hardest thing for him is appearing to be in control while it rapidly slips away from him. His later decision along with Peyton, Liv and Clive to lie about what really happened with the murder that went viral opens them up to all sorts of problems but sort of makes sense within a desperate situation. Liv being on fitness-nut brain doesn’t add much as it isn’t connected to the case so exists purely for comedic flair without having any relevance.