iZombie puts Liv on the brain of a sexually charged pick up artist as she furthers her mission to become the next Renegade by attempting something creative.

As I’ve probably said many times, the overall quality of an episode can live or die by how entertaining the brain Liv consumes is. It isn’t always the case but on the whole if the brain isn’t enjoyable then the episode suffers as a result. This is an outing that exists somewhere in that middle ground where the brain is entertaining at times and insufferable elsewhere. Part of the issue is that the brain creates such a sleazy personality that it’s hard to make laughs out of it because the characterisation is so unpleasant and off putting. As a singular joke that the episode could move beyond it might have worked but continued repetition of it is fairly unpleasant. 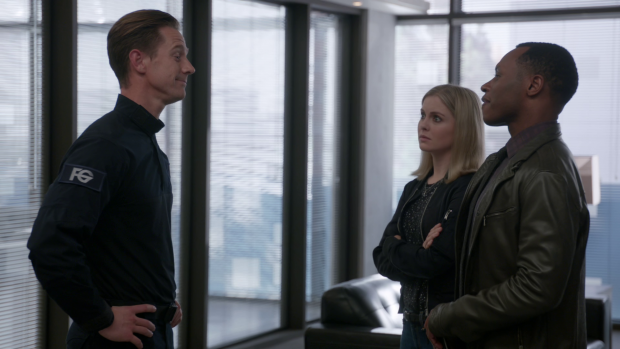 It does factor into the overall character story in different ways. Liv and Levon are at a point where they are comfortable admitting there is an attraction between them that might be worth exploring but her brain gets in the way of that. Levon is shown to have self respect as well as a desire for something real. As a Zombie he realises that Liv’s brain might be overpowering her judgement and he refuses to take advantage of that regardless of how tempted he might be to do so. Liv’s attempt to trick him by pretending the brain is no longer affecting her is very mean spirited and adds to the unpleasant nature of this particular personality.

This brings back the issue that has come to my mind this season about the influence of brains and how that relates to consent. Liv is sex crazed in this episode because the brain she consumes has an overpowering personality that accentuates those desires in her. In short this isn’t really her so there’s a real issue surrounding her behaviour when under the influence of a brain. If she sleeps with someone does that count as a violation or does that depend whether they know about the brain or not? It’s really broad and I’d like to see the show address this at some point beyond reminding her that she should be held accountable for things she does or says when on a certain brain.

Liv as a sex crazed pick up artist is used to develop Clive in really unexpected ways. He’s still struggling to accept being in an open relationship because he doesn’t know what it takes to pick up women. His attempt last week was unsuccessful because his sense of decency got in the way. This episode featured Ravi and an altered Liv trying to teach Clive how to pick up women for a one night stand. It’s a plot that risks being far too sleazy if it weren’t for Clive’s decency showing his discomfort with the situation. I personally related to him being uncomfortable around modern music and failing to know how to approach women. 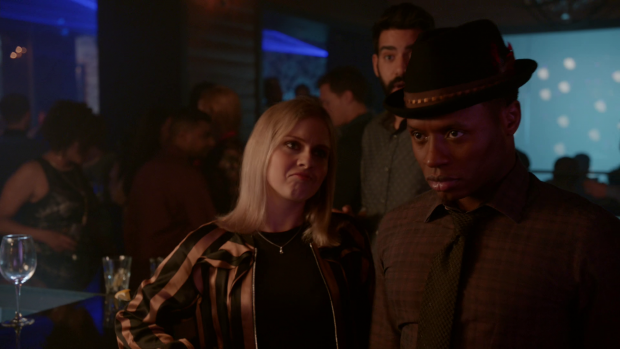 Clive tries to play the game

As fun as all of this was I have issues with Clive deciding to pay a hooker when he fails to pick up anyone at the nightclub. This is so profoundly out of character because at no point is it established that he is in dire need of sexual release so his decision makes no sense. The only reason he’s entertaining this idea is because he thinks that Dale is doing it as well so feels the burden of expectation to commit to the open relationship in the same way she has. I don’t believe Clive would pay for a prostitute just to “get it out of the way” though at least he is full of regret afterwards.

His conversation with Dale suggests that there’s a severe communication problem in their relationship. The reveal of the open relationship was played for shock value so the audience has been deprived of the discussions that led to the decision to seek physical companionship elsewhere while maintaining their commitment. This episodes suggest that they have also been deprived of those discussions as they don’t seem to be on the same page on how the relationship is working. A certain amount of it can be dismissed because Clive isn’t comfortable talking about it and would rather live in ignorance when it comes to who Dale is sleeping with.

All we really get from their conversation is that Dale is disappointed with Clive for sleeping with someone else because it is something she hasn’t done because she also doesn’t feel comfortable with it. This should have been a conversation before this point if it was clear that neither of them really wanted this. Dale’s disappointment with Clive’s actions is both justified and unjustified in the sense that she won’t feel great that he was able to go through with it when she wasn’t but she also can’t really hold it against him because it is something they both agreed to. The fact that it’s something they are both struggling with because of the connection between sex and intimacy isn’t as hard to break as they thought is a great idea but it feels like adult conversations should have taken place long before now. 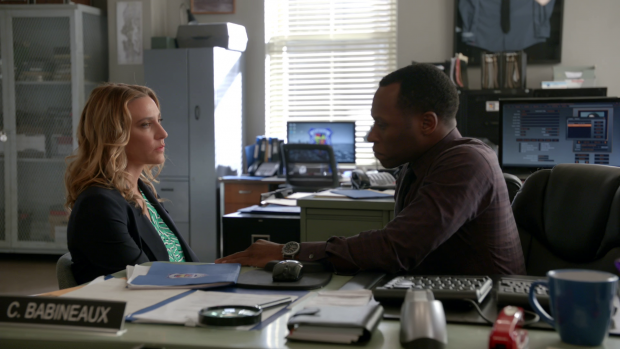 Clive and Dale fail to figure out their relationship

Liv and Clive’s investigation may not be very interesting but it does further her Renegade career in a significant way when she uses it as an excuse to steal a machine that will let her create Zombie I.D. cards so that the newly created Zombies are entitled to rations. It’s a noble idea and subverts the system in a very blatant yet subtle way. It should allow Liv to continue operating under the radar provided she doesn’t leave her bedroom door unlocked while listening to music through headphones as she uses illegally obtained equipment to create fake I.D. cards. It’s not a very smart thing to do and she definitely deserved to get caught. The fact that it’s Peyton means that I’m not overly concerned about her not being on Liv’s side especially after her very vocal disagreement with both Chase Graves and Major.

Chase Graves continues to be an interesting character because he is consistently shown to be doing what he thinks is the right thing to make the best of a terrible situation. He outright admits that Seattle is no longer a democracy because it doesn’t work as a concept when people are starving and there is the constant risk of an uprising. Chase has stopped pretending that he isn’t running the city as a democracy because he no longer has to since the people aren’t rioting at this point. The fact of the matter is that the problem is getting worse and dealing with it is becoming increasingly difficult.

The decision to kill Mama Leone to set an example to citizens wasn’t made lightly. From his point of view she was responsible for creating more Zombies than the city can reasonably support and that couldn’t be tolerated because it sends a message that others should feel free to do the same. Her death was a way to pacify the masses by scaring them into cooperating which is what is required in a desperate situation where survival is a constant struggle; at least according to Chase Graves. 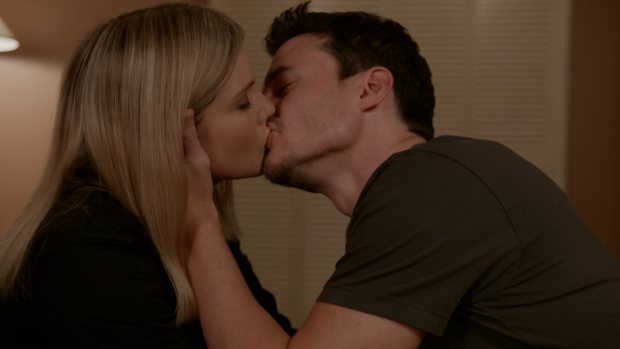 He’s under particular scrutiny in this episode for ordering a newspaper be shut down simply because they print editorials that don’t paint Fillmore Graves in a favourable light. As with Mama Leone they can’t afford that kind of publicity so Major is sent in to deal with the problem. Naturally the journalists refuse and gunfire is used to convince them otherwise. Allegations of fake news are thrown around to cover up the issue but the real meat here is that Fillmore Graves have become a law unto themselves using their resources to stamp out any opinions that don’t further their agenda. It’s a dangerous mindset and yet, Chase Graves can be understood from a certain point of view. Complexity is something iZombie does really well as shown by this part of the plot.

Major is an interesting addition to all of this. So far this season has been challenging the characters to take a side based on their own opinions. Peyton has chosen to work within the system to help where she can for instance or Ravi keeps to his current job because he knows that at least he can keep Liv in brains that way. Major is continuing to support the decisions that rob people of their freedom. In this case he’s responsible for censoring a contrary opinion and shows no apparent remorse for his actions suggesting that he believes in Fillmore Graves to some degree. His point of view is unique because he is in a position to see both sides since he is friends with Liv, Peyton and Ravi but also understands what Fillmore Graves have to deal with. It’s getting close to the point where Major is beyond redemption so hopefully his stance will be explored in greater detail because at this point it feels like Major is two characters depending who he interacts with. 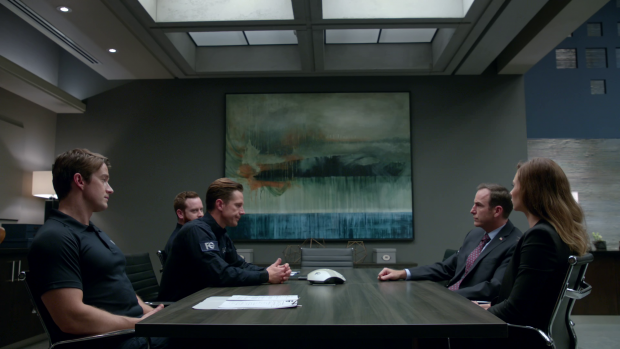 An uneven episode that is dragged down by an obnoxious brain personality that carries a single joke with it that gets old very fast. It is funny in places and brings back the problem of consent as well as well as responsibility when it comes to being under the influence of a brain. Certainly Liv behaves in ways that could be considered unacceptable in this episode and it’s clear that the brain excuse isn’t always good enough. The brain does help further Clive’s difficulty dealing with an open relationship though the handling of this is somewhat problematic as Clive’s decision to sleep with a prostitute is profoundly out of character. His conversation with Dale doesn’t really help matters because it only proves that they haven’t discussed this properly so aren’t aware of what the other actually wants. It’s messy and not in a good way.

Liv using the case of the week to further her role as Renegade by stealing I.D. making equipment is a really good idea though Peyton catches her because she’s careless which makes no sense. Fillmore Graves and Chase in particular are still nicely complex. I really liked his speech about when democracy doesn’t work and how he uses that as justification for the way he chooses to run things. Major’s actions in this episode are beyond questionable and move him towards the point where he might be beyond redemption. This will need to be addressed as if feels like Major is two different characters depending on who he interacts with.