iZombie focuses on Ravi and Peyton’s relationship while addressing the lingering issues of Major’s upcoming death and Blaine’s lack of memory.

I’ve always loved the way this show keeps the character stories ticking over. Everything is treated as important and none of the characters ever feel like spare parts. Even Clive who has historically received the least development is an important part of the show with a lot of personality. If any of the characters were shed then their loss would definitely be felt. 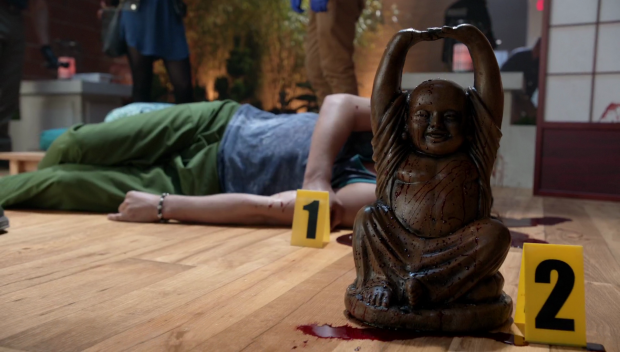 A not so Zen crime scene

Ravi’s contribution to last week’s episode was mainly moping over Peyton and hiding from the fact that he would eventually have to talk to her. After some choice advice from Liv both then and in this episode he finally decides to have a conversation.

It’s a really awkward one as he admits to her that he has issues with the fact that she slept with Blaine. In fairness he admits that he shouldn’t have a problem with it on an intellectual level but can’t help letting his imagination roam to places he doesn’t want it to. Peyton calls him out on this and reminds him that his opinion on what she did when there was nothing between them is irrelevant. Ravi has no right to judge her for what she chooses to do with her own body and Ravi knows it but still can’t help act like an entitled child over the whole thing.

This escalates later when Blaine is given the opportunity to test his cure for memory loss and declines. Ravi gets really worked up about that and reminds everyone of the horrible things Blaine has done. He sees it as an opportunity for Blaine to atone and is noticeably passionate about it. This is essentially the culmination of everything he has been bottling up since the first episode of the season and Rahul Kohli does a great job putting it across.

After this point things start to get a bit ropey. His steadfast declaration of his love for Peyton feels like a natural step for him to take even though we haven’t seen much of their relationship prior to this point. I can believe that he at least thinks that he loves her given how close he feels to losing her. To my mind that should be the end point for this episode as there’s enough uncertainty following that to carry us into the next episode. 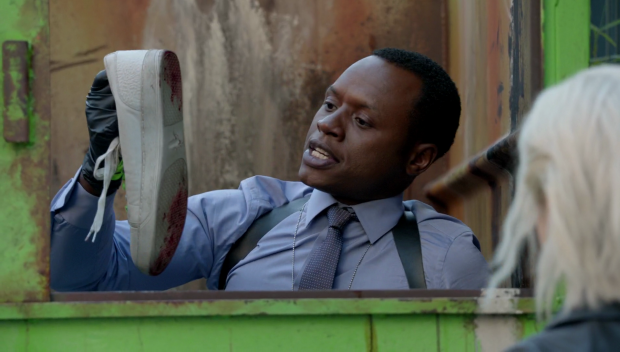 Clive gets his hands…and everything else dirty

What happens next might be a personal issue on my part because I so despise love triangles; though I suppose with Blaine involved it makes it more of a rhombus. This episode showed a textbook example of why I hate them so much. Ravi and Peyton get to the point that they’re actually moving forward with their relationship and the conversation is appropriately emotional yet sensible. Peyton tells Ravi in no uncertain terms that he’s the one stopping them from moving forward and it’s enough to make a drunken Ravi realise that he can fix that. The problem is that he has not long finished sleeping with his former boss Katty (Christina Cox).

Drunk or not this makes Ravi seem like a bit of an ass and the way he tries to explain himself as thinking it wasn’t going to happen between them is completely absurd. Granted he’s not thinking clearly but it doesn’t paint him in the best light. Peyton was right to walk out on that situation but what this seems to be setting up is another few weeks of delayed gratification in their relationship and I’m not keen for that. It seems like Katty will be around for a while since she is a key figure in investigating the existence of Zombies.

Memory loss Blaine is being handled in really surprising ways. This episode seems to put an end to the suggestion that he might be faking it. The scene between him and his father would have been the perfect opportunity to drop hints to that effect but there aren’t any. I’m still suspicious of the whole thing because I’ve learned from watching this show that Blaine isn’t to be trusted but David Anders does an excellent job making Blaine’s change of character convincing. It takes Ravi reminding the other characters and the audience of all the terrible things that he has done to keep that in the forefront. The best comparison I can think of is Spike in Buffy the Vampire Slayer. For those not in the know he started off as a villain who was guilty of far worse things than Blaine but was rehabilitated and eventually redeemed. The same could be happening here and memory loss seems like one way to do that.

Where I think they’re going with this is that Blaine will regain his memories but see his actions in a new light after having the blank slate to change his perspective. There could be a lot of guilt to come as he slowly regains his memories and we’ll get to see David Anders play him as tortured which will be impressive. 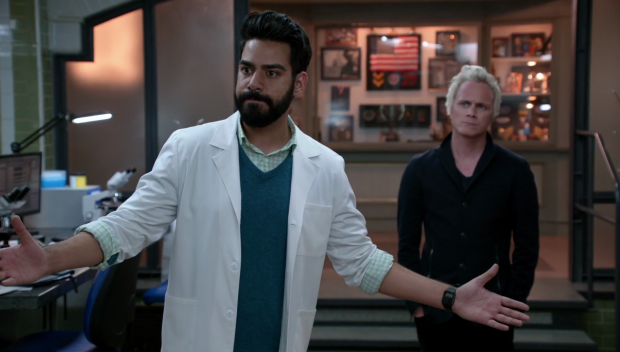 Another angle could be that he’s playing some kind of long con and may only pretend to regain his memories so that he gains the trust of Team Liv (Team Z?) and can operate behind their back in some way. David Anders is such a great actor that anything is possible and I’m not ruling anything out.

Assuming his current state is genuine I really like what they’re doing with him. Peyton seems torn between being wary of him and being sympathetic of his situation. She definitely feels that she owes him for saving her life but I get the sense that she is keeping him at arms length as well. It’s a complex interaction but there seems to be genuine friendship in there. It’s also always great seeing him get to use his considerable singing talents.

The aforementioned scene with his father makes for great viewing as well. Robert Knepper is incredible in this exchange. His line delivery when he tells the story that ends with the gut punch of outlining his hatred is note perfect and David Anders plays the reaction wonderfully. Watching these two actors play off one another makes for incredible viewing and I really want to see more of it.

I also really liked the scenes between Angus and Don E. They have a really fun dynamic built mostly on Angus reacting to Don E’s ridiculous ideas. Them being in business together could be interesting but it’s far too early to tell. For now they’re just really entertaining to watch. 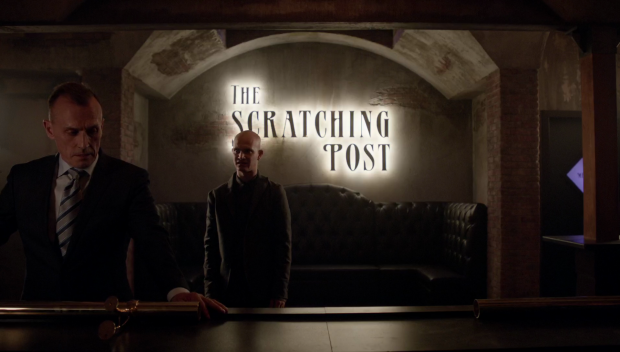 Major being on borrowed time comes back in a big way. It’s shown through the standard coughing to indicate serious illness trope. Thankfully he’s open about it pretty much immediately and the timeline of having mere weeks is established. Major has no issue with taking the cure followed by the memory restoring serum because he definitely wants to have his memories back. Until then he’s content to remain a Zombie and still has the goal of finding Natalie before it’s too late. It’s starting to get to the point where referencing this is tedious; we aren’t quite there yet but close.

The development of his role as Zombie mercenary is solid enough and gives him a very small arc to go through across the episode. He starts off as incompetent and gains the necessary skills by the end of the episode. It’s a very quick transition but it gives him something to lose once he takes the cure. Being a Zombie mercenary is a good role for him because he essentially has nowhere else to go now that many people think he’s a serial killer. I’m not sure how this plot will progress but for now it puts him in a place that is close to Liv’s inevitable disagreement with Filmore Graves.

Liv very much took a back seat in this episode and sometimes that’s fine. I feel that the case of the week could have been completely done away with as it doesn’t add anything or feed into the other stories in any major way. It’s just a way to keep Liv and Clive in the episode without involving them in the other character interactions. I also didn’t find Liv taking on the personality of a lifestyle guru and talking about things like positive energy to be all that entertaining. Rose McIver’s performance was as great as always but the material wasn’t the strongest.

A solid episode that focuses on character dynamics above all. Ravi finally dealing with his feelings about Peyton’s fling with Blaine is handled reasonably well at first. Having him realise that intellectually he has no right to have an issue with it while being overwhelmed by his emotional reaction was an interesting way of approaching it. I also like that Peyton calls him out on his irrelevant opinion. The point where Ravi declares his love for her and then ends up sleeping with Katty just as they’re getting together is textbook infuriating love triangle and I’m not looking forward to the holding pattern that we’ll suffer with in the coming episodes.

Blaine’s apparent memory loss is being handled in really interesting ways. It does seem completely genuine but it’s possible that he’s playing the long con and Ravi’s potential cure is an opportunity for him to reveal that he remembers everything while gaining the trust of the group. If it is genuine then it’ll be interesting to see him approach his memories with a new perspective but I wonder what will become of his character once that has been done. Major’s borrowed time and his learning curve within Filmore Graves are well handled as he has a time limit as well as something to lose. I’m not sure where this will go but for now Major is in an ideal position for Liv’s eventual disagreement with Filmore Graves. I feel that the case of the week could have been done without this week as the material wasn’t the strongest. 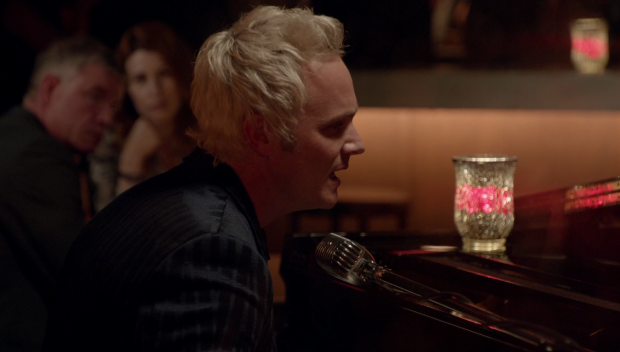