“Heaven Just Got a Little Smoother”

iZombie returns for a third season and focuses on the massive issue of Zombies becoming known to the general public.

I wondered when this show was going to get around to exploring this as an idea. Zombies in this show are a hidden group within society who are able to blend in but represent something that can be feared or misunderstood by normal people. 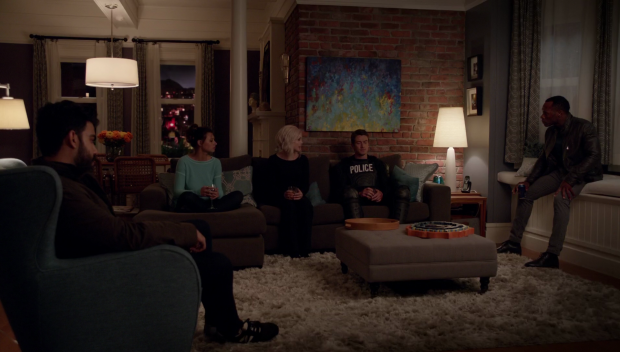 You could compare Zombies to people living with an illness. The illness happens to be highly contagious and incurable so there is automatically a stigma attached to it. AIDS comes to mind when I think about it and that paints an interesting picture of how humanity might react to the existence of Zombies.

The main fear is that if the existence is revealed then it will result in mass panic and persecution but the most interesting thing is that it can almost be understood. Zombies can blend in almost perfectly which is fine because they are still functionally human beings but there is a risk associated with them as a stray scratch can have someone infected. All it takes is an accidental collision on the street and suddenly someone is resigned to a lifetime of eating brains when they had no choice in the matter.

Of course we see this from Liv’s perspective who is starting to feel the weight of her world crashing down around her. She has been incredibly careful since becoming a zombie to make sure that she doesn’t accidentally scratch someone and works very hard to make sure that she is sufficiently well fed to keep the Zombie part of her in check.

Since the very first episode she has been afraid of people finding out the truth about her and how they might react. She’s been lucky so far with her friends all being mostly understanding though her fears were confirmed when Peyton left town to escape the weight of the knowledge. That resolved itself so ultimately Liv has had a fairly positive experience so far. 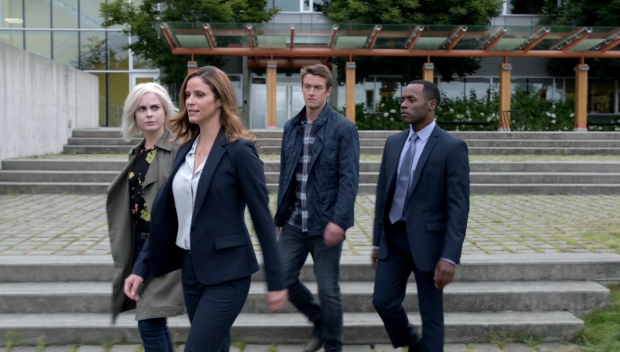 After the events of the end of last season it looks like everything may change. The scale of the incident was big enough that the scale of it is significant enough to not be covered up very easily. A radio interview with an eye witness puts some information out into the world and the murder of a Zombie family shows that people are scared and aren’t going to accept this subculture living among them. It’s terrifying for Liv and we feel for her because we’ve seen her entire struggle and have seen other Zombies living as functional members of society.

Beyond the disease metaphor there’s the obvious connection to marginalise minorities. Throughout history -and unfortunately recent history- there have been horrific cases of people being treated terribly by those around them simply because they’re different in some way. They don’t deserve it and it’s a constant reminder that society isn’t as enlightened as we’d all like it to be. I can see this being explored very neatly throughout this season. People will react with prejudice and fear as they are already doing despite the fact that most Zombies live harmless lives that don’t hurt anyone. The threat of discovery seems to be coming from all over as shown by Ravi’s former boss finding brain inside the digestive tract of a corpse. I like the idea of the risk coming from different directions as it increases the tension effectively.

There is a potential answer to that problem in the form of Vivian Stoll (Andrea Savage); the leader of a Private Military Contractor named Fillmore-Graves. She wants to make Seattle the capital of the Zombie Homeland and has an army of highly trained Zombie soldiers fully committed to defending the species from anything that humanity can throw at them. It might seem like overkill and there’s a strong argument for that being the case but there is definitely merit to what she’s suggesting. If Zombies start identifying themselves as something other than human then arguably they have to put things in place to defend their species from anyone who wants to cause it harm. Vivian is no different to any other World Leader wanting to safeguard the population. Whether her intentions are honourable or she has a larger agenda in mind is still to be determined.

I suspect that Vivian will be one of the central antagonists for the season but the episode does a good job of establishing her as being different to a standard villain. Everything she says seems reasonable in some way and it’s unclear if she only plans to use her army for defence in a worst case scenario. I suspect the conflict between her and Liv will be more of an ideological one rather than her simply being a “bad person”. 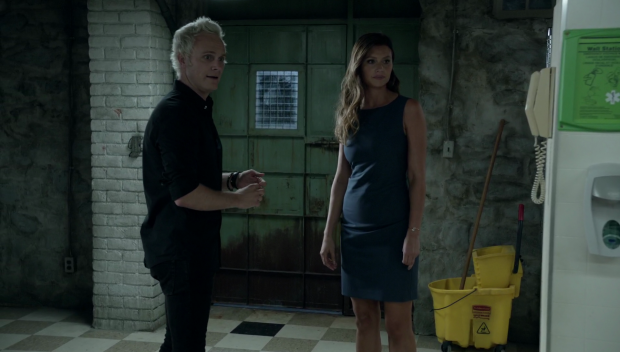 Don’t do it Peyton!

Vivian shows clear empathy for other Zombies throughout the episode. The idea of Zombie Island is a good one in principle as it allows Zombies to live their lives free of persecution in a way that lets them thrive and stops humanity from having to worry about them. Of course it has its problems such as putting up a barrier between the two species which will only breed more fear in the long run.

I really like the idea of Zombie children as it fascinates me. Mainly I’m wondering if they still age or are stuck that way for the rest of their lives. If that’s the case then it seems more cruel than turning an adult as children have to live their entire lives without getting the chance to grow up. The question hasn’t been answered but I look forward to learning more.

Despite all of the big picture thinking the episode occupies itself with there is still plenty of time for the characters. The end of last season is still raw since the episode picks up specifically 2.8 minutes after the events of the finale and ends about three days later. It may have been nearly a year for us viewers but for Liv it has been no time at all so Drake’s death is still very raw for her. Her lack of reaction is explained away by the soldier brain preventing her from dealing with her emotions. When the brain wears off she has a break-down and it’s the first hint of the old season giving way to the new season in terms of Liv’s emotional development.

It looks like her arc will be around her having to deal with the very new World that she finds herself in. A lot has changed with the threat of exposure and Clive recently finding out the truth. I like that the episode has Liv make a pact with Clive, Major, Ravi and Peyton that there will be no secrets between the five of them which should cut down on wasted time spent keeping information from one another -I’m looking at you, The Flash– assuming everyone adheres to it. 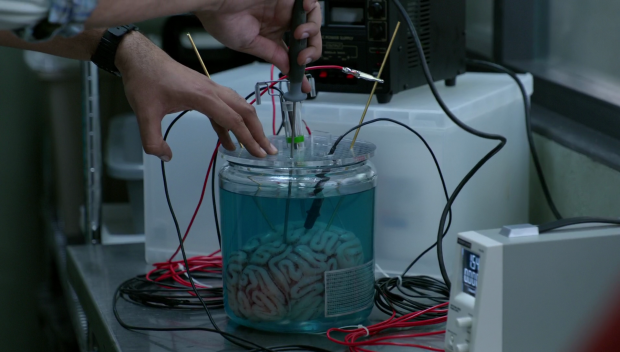 Clive knowing the truth has proven itself to be a good move as it creates a new dynamic. The complete honesty between Liv and Clive is refreshing and it allows him to comment on the situation in a way we haven’t seen before. There’s also plenty of comedy to be mined from it as he tries to make sense of everything. There isn’t much development of it in this episode but there’s plenty of material to be mined from this shift.

Major being in full agreement with Vivian is an interesting development as it will allow Vivian’s ideology to clash with Liv’s with Major representing it. Assuming that’s the route the show is going to go down then having the conflict focused through Major and Liv is an interesting way to frame it. Major still has to deal with people believing that he’s the Chaos killer and he’s still looking for Natalie so that he can fulfil his promise to her. There’s also the fact that there is a ticking clock associated with him becoming a Zombie again thanks to Ravi’s first cure having lethal side effects so there’s a lot for Major to do this season.

The weak link in this episode is the Ravi, Peyton and Blaine love triangle that appears to be brewing beneath the surface. It hasn’t come to anything yet but the signs are there and I’m really concerned about it. Peyton is grateful to Blaine for saving her life and is clearly suffering some form of PTSD after Mr. Boss tried to have her killed. All of this makes sense but given the movement that was made towards her entering into a relationship with Ravi then it doesn’t really make sense for her to be attracted to Blaine especially since she knows what he has done in the past.

At least there was some comedy in Ravi’s reaction to this. He struggles with the fact that Peyton slept with Blaine and feels sorry for himself as a result. The fact that he is fully aware of this and tries to stop himself spiralling is where the comedy came from and it shows a degree of self awareness in the way this is being written. Hopefully this implied triangle won’t become too insufferable. 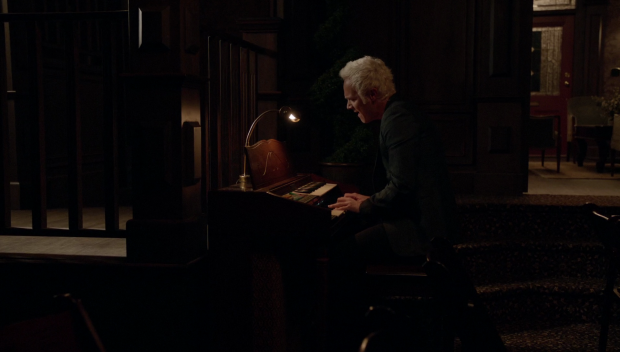 Is the old Blaine coming back?

Blaine’s lack of memory is strange as I’m still not clear how genuine it is. On one hand it seems completely genuine and David Anders does a wonderful job of bringing that across. If he’s lying then it’s a very convincing lie as Don E points out. There is the hint of a more sinister edge to him but I wonder if the writers and David Anders are just playing with audience expectations by injecting these small hints. It could be seen that he is manipulating the situation expertly by exploiting the confusion people have over his memory loss and this could extend to him lowering Peyton’s guard to the point that she might consider him romantically again. Time will tell on this one.

Don E working with Angus is a development I didn’t see coming. I like how his betrayal at the hands of Blaine leads him to come up with this plan and I’m excited about the opportunities this creates for future episodes. It looks to be a busy season and I’m interested to see where it all goes.

A fascinating opening to the season that does a great job of laying the groundwork while picking up the threads from last season. The threat of Zombies being discovered and the potential reaction from humanity is explored from many different angles. Vivian and her army prepared to defend the species is a really interesting angle with lots of potential as its unclear if her empathy is genuine or if she has a larger agenda. It certainly seems that her clash with Liv will be on an ideological level. Major joining up with Vivian adds to that and makes the conflict a personal one. There’s also the fact that Major is living on borrowed time.

Clive knowing the truth works really well as it changes up the dynamic and allows for some comedy as Clive tries to get his head around everything. The one weak link is the potential Ravi/Peyton/Blaine love triangle purely because it isn’t that interesting and doesn’t make much sense given Peyton’s reaction to the truth about him last season. Ravi acknowledging how pathetic his jealousy is was funny though. It’s unclear how genuine Blaine is being about his memory loss but the partnership between Don E and Angus has a lot of potential to answer that question. There’s a lot to cover this season and I can’t wait to see more. 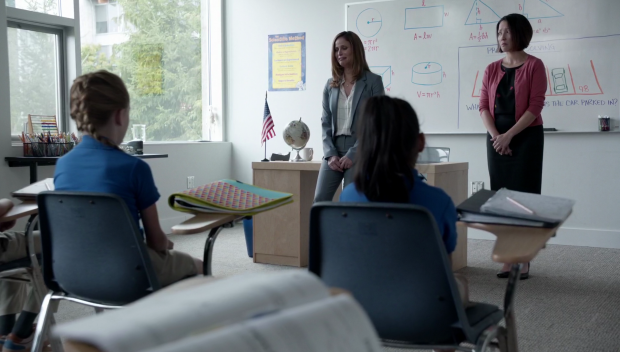